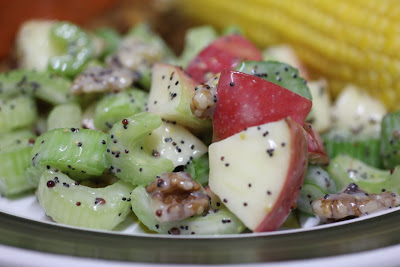 Salad made using an approximation of the recipe that was drummed into my head by classic comedy moment in a hotel in Torquay, England.

What does it mean to me:
Fawlty Towers is a classic British comedy set in a hotel at the seaside town of Torquay.  The hotel is run by the inept rude Basil and his bossy wife Sybil, surrounded by a cast of beautiful painted characters.  I want to both strangle and rescue the hapless Basil as he gets into all kinds of scrapes.  Interestingly the one sane person in the show, Polly, is played by the real life wife of John Cleese who plays Basil.

I watched it as a child with my family. In my memories there were the seven kids and mum and dad sitting on the saggy old green couch under the pinboard of posters. Actually I suspect some of the little ones might have been in bed. We would shriek with laughter until we were in convulsions (in the days before people began to LOL.)

We didn’t have holidays where we stayed in hotels so Fawlty Towers seemed very exotic. It took me a long time to realise that the name of the hotel was a joke.  (And even longer to realise it was set at the British seaside which compared to our Aussie beaches also seemed a joke!)  We loved to imitate Sybill calling to her husband ‘Basil! Basil!’ every time he did something wrong. Which was often. I was too young to have watched Monty Python and this seemed very grown up and so much fun. It is one of my happy childhood memories. 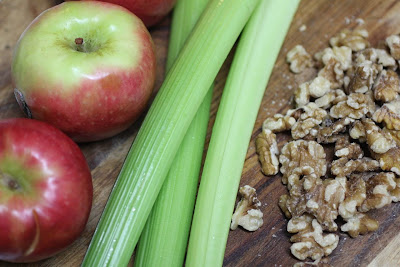 Food moment:
Waldorf Salad. In the episode named after the salad, the American guest kept asking for Waldorf Salad – apple, celery and walnuts.  (Actually I had to refresh my memory and only could find a Waldorf Salad remix online which showed that my memory is faulty (fawlty) and it is actually celery, apples, walnuts, grapes.  Grapes?  I don't remember grapes!)

Basil had let the chef go early and was in a pickle because this dish was not on the menu.  The way he handled it was hilarious - 'may I recommend...' 'tomato, lettuce...' 'have you by any chance ever tried....'  It is such a great scene that plays out national stereotypes - the obnoxious demanding American and the fawning Englishman stuck in his ways.

Ever since I have been convinced that this is a dish that Americans are fond of.  According to Wikipedia, the salad was created at the Waldorf Hotel in the late Nineteenth Century, featured in cookbooks and a Cole Porter song but it was also made more popular by its appearance in Fawlty Towers.  Popular culture is funny like that, the way it feeds upon itself.

Recipe notes:
After searching online and offline, I used a recipe from Gretel was getting fatter. It appealed because I share her childhood dislike of celery. But I had a bunch of the stuff and wanted company for a nut roast. The mayo I used was a cheap low fat one and was quite sweet. I think this would work better with half mayo, half yoghurt or a much better mayo. And I couldn’t stick to the recipe. I added poppyseeds. 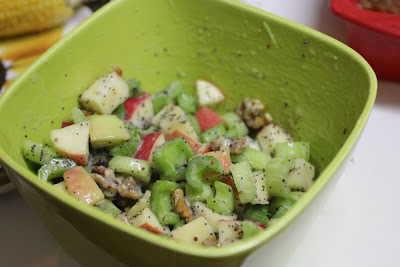 Random Notes:
I made this many months ago.  The recipe got left by the wayside and then put aside for Vegan MoFo.  I had been to my parents' place the previous day with some nut roast for lunch and had leftovers.  Waldorf Salad has been on my mind for some time because I love Fawlty Towers.  Sylvia and I went to the park and came home with little time to make dinner.  Warmed up nut roast, salad and corn on the cob was perfect.  Quite an old school 1970s vegetarian sort of meal.  Perfect for remembering Fawlty Towers.

Lightly whisk together mayonnaise, lemon juice, mustard and poppyseeds.  Toss through apples, celery and walnuts.  It kept overnight but I think was better on the first day.

On the Stereo:
Hal David and Burt Bacharach: the Songbook Collection: Various Artists

This post is part of Vegan Month of Food September 2013.  This year for Vegan MoFo I am cooking recipes inspired by some favourite tv shows - and veering off topic occasionally.  Go to my Vegan MoFo list for more of my Vegan MoFo posts.
Posted by Johanna GGG at 19:26