Lentil and mushroom nut roast and what to do with leftovers 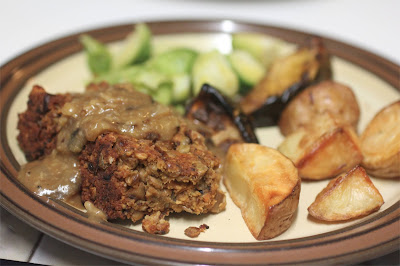 Winter is the time for nut roasts.  As the days grow cold and then nights darken early, I hanker after a roast dinner like mum makes, but with a hearty nut roast replacing the meat at the centre.  I made a nut roast last week that lasted us 6 nights.  I have recently come across a few people who hate leftovers.  They would shudder at the thought.  E and I were delighted.  After a lot of energy on one night, I had easy dinners for almost a week and E had minimal dishes to wash. 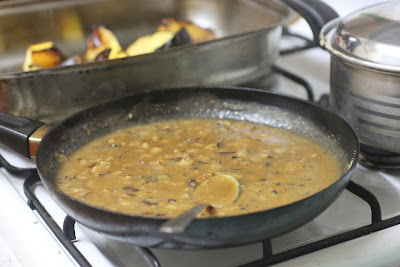 I swithered and swithered over which recipe to follow for the nut roast.  Every recipe I fancied had ingredients that I didn't have in the house.  Finally I came to my senses and just threw in what I had about.  It was quite a bit of work.  I put potato and pumpkin the oven to roast while I made the nut roast.  Then I made gravy while the nut roast was in the oven.  While the gravy simmered I microwaved the brussels sprouts. 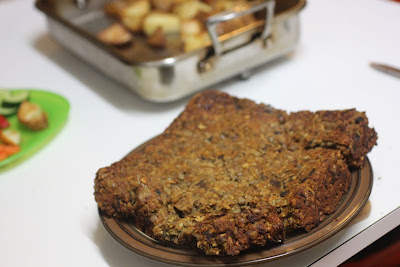 There was a lot of nut roast mixture.  Usually I cook nut roast in a loaf tin.  I probably should have used two loaf tins but I used a square cake tin instead.  This was not good for turning out a nicely presented nut roast.  Ah well.  It is one of those dishes that needs a lot of make up to look good.  It was a little crumbly around the edges but generally held together well. 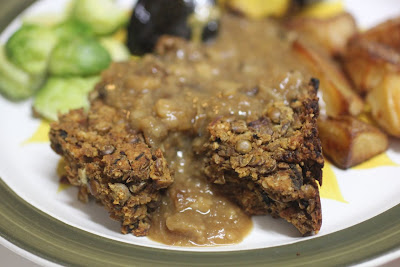 The nut roast was very tasty.  I don't usually make them with lentils but I happened to have bought a bag of green lentils at the green grocers recently.  I really liked the nut roast this way.  I think the swiss brown mushrooms also gave it extra flavour.  We had enough roast vegetables to have another roast dinner the next night (Day 2). 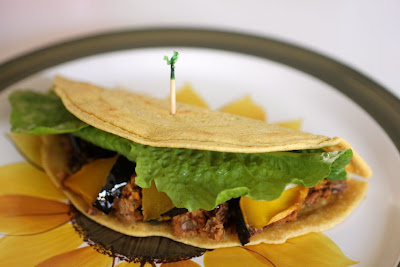 Day 3: I finally got around to trying Ricki's Toronto Sandwich for lunch.  Well I didn't use her fillings but I made the chickpea flatbread.  This was brilliantly simple.  I just mixed 1/4 cup of chickpea flour, a pinch of salt and 2-3 tbsp of water to get a pouring batter that can be fried in oil on a frypan.  I had to spread it around the pan a bit with the back of the spoon and then be really patient to wait for golden brown marks on one side.

The chickpea flatbread was delicious with nut roast, chutney, roasted pumpkin and cos lettuce.  I loved it so much that I decided we could just eat the same for dinner that night.  (I was trialling some ice cream and wanted a light dinner.)  E loved it but Sylvia was lukewarm.  I tried to give her melted cheese on hers and then some vegemite to encourage her to eat it.  All I can say is that E and I both ate her leftovers and enjoyed it. 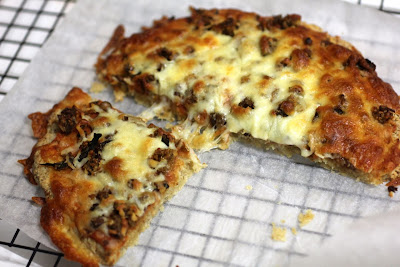 Day 4: I finally returned to a vegan gluten free cauliflower pizza base that I had been on the verge of posting on this blog a few weeks back.  I wrote it up and then I hit one wrong button and bad Blogger deleted it without a word of warning.  Argh!  I decided to make it again with blanched almonds for a whiter crust.  It was nice but soft.  Maybe I will experiment further.  Or perhaps if I want a GF pizza crust I will just stick to the Chickpea pizza base that worked so well.  The nut roast was lovely sprinkled between tomato sauce and cheese. 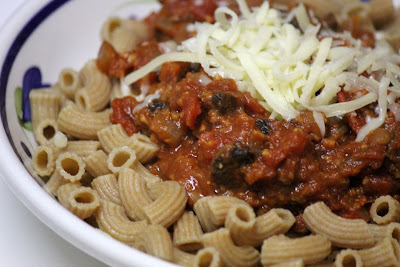 Day 5: I transformed the remaining leftover nut roast into a vegetarian bolognaise sauce.  It was delicious.  And I was very pleased to finally update the photo on my veg bol post that I write in 2007. 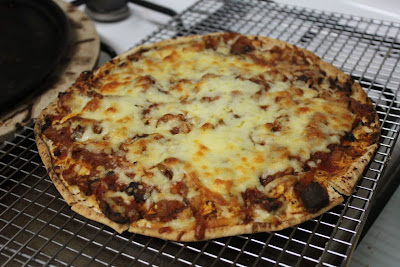 Day 6: tonight we got home late and tired.  I had just a little vegetarian bolognaise sauce left.  It was spread on a pita bread and topped with cheese.  Baked for 20 minutes at 220 C, it was a quick and tasty pizza.  Again quite light but that was just right after a fine afternoon tea.

I've said it before and I will say it again, I love nut roast.  Not only is it delicious as a hearty dinner but it also makes wonderful leftovers.  I am sending this to Ricki's Wellness Weekends.

Simmer the lentils for about 40 minutes or until soft.  They should be on the mushy side of cooked rather than just cooked.  I added a pinch of salt towards the end of cooking.

Fry onion in olive oil for about 5 minutes or until translucent.  Add mushrooms and fry about 8-10 minutes until mushrooms are dark and soft.  I added the carrot in the last few minutes before the mushrooms were done (it doesn't need much cooking and doesn't need to be cooked through - it will cook in the oven) and then add the garlic at the end and stir in before turning off the heat.

Add remaining ingredients and stir until you have a thick mixture - more paste than batter.  Check seasoning and adjust to taste.

On the Stereo:
Gather in the mushrooms: the British acid folk underground 1968-1974 – Various Artists
Posted by Johanna GGG at 22:26