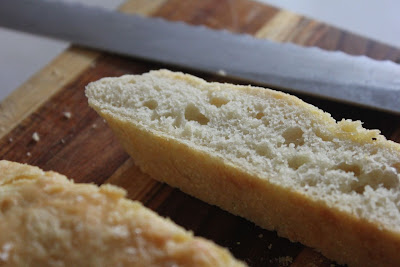 There is nothing like a fresh loaf of bread first thing in the morning.  Recently I made Lucy's Rhubarb and Raspberry No Knead Focaccia.  It was far more straightforward than the Jim Lahey No Knead Bread.  Bung in the bowl before going to bed.  Flatten and bung in the oven when you get up.  Easy. 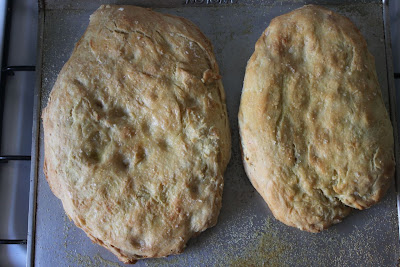 I loved it covered with fruit but it was too many bits for Sylvia and E wanted something savoury.  I tried it with red onion rings on it recently but I used too much salt.  I made it again on the weekend and was more sparing with the salt.  (Though Sylvia still sternly told me it was a 'sometimes' food rather than an 'always' food because salt is a 'sometimes' food.) 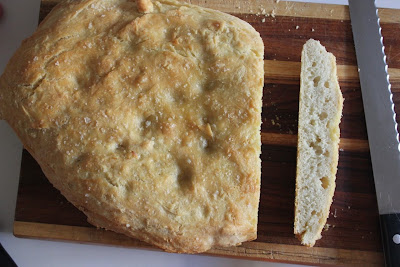 When I made the focaccia with onion on it, I noticed that the olive oil pooled in some areas and made it really soft.  So I was generous with the olive oil and even drizzled a little on it after it was baked.  I also trialled letting the dough rise in two bowls because I was concerned my large bowl wasn't big enough.  I think either one or two doughs is fine.  Two might work well for doing a sweet and a savoury version. 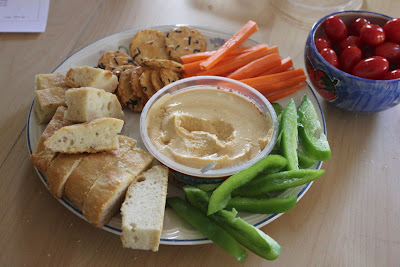 Two loaves also meant that we were able to hoe into one of the loaves yesterday morning and then take the other loaf down to Geelong where we visited my dad for lunch.  Pair the focaccia with some hummus and vegies and you have a most excellent lunch.  Followed by my sister's chocolate cakes (thanks Fran)!  It was lovely to see family, but most of all the see my dad at home resting after his Europe adventures.

I am sending this bread to Susan for YeastSpotting.

Previously on Green Gourmet Giraffe:
One year ago: In my kitchen: July 2012
Two years ago: CC Orange, Lavender and Almond Syrup Cake
Three years ago: Lemon Slice and some Nostalgia
Four years ago: A Tale of Carrot and Feta Dip
Five years ago: Sparkles the Rabbit Cake

No knead focaccia
Adapted from this recipe

To prepare for baking:
3 Tbsp olive oil
sea salt flakes, to sprinkle
Polenta, to sprinkle on the baking tray
Extra olive oil to drizle when cooked

Start the night before you want to eat it or at least 8 - 10 hours before you want to eat focaccia.  Take a large mixing bowl.  Place yeast into warm water and leave for about 5 minutes until you see the yeast is active (it should foam or bloom slightly).  Stir in oil, flour and salt to make a soft dough.  It takes quite a bit of stirring to incorporate all the flour.  Cover with clingwrap and leave at room temperature overnight or for about 8 hours.

Note: When I have made this before the dough rose to the top of the clingwrap (in a glass ceiling sort of way) so I divided the dough mixture into in two bowls this time.  It didn't rise so much more that it was worth it, except if you want two smaller focaccias.

In the morning, sprinkle a large baking tray with polenta.  Preheat the oven to 200 C (I did 220 C which worked for my slow oven.)  Carefully take the risen dough from the bowl - it is fairly sturdy but you may need a little flour on your hands so it doesn't stick to them - and place on a lightly floured surface.

Pat dough into an oval shape about 35 x 25 cm (or make it into two smaller focaccias if you have divided the dough into two bowls when the dough is rising).  Use a little flour if needed.  Make dimples with your fingers.  Carefully transfer to the prepared baking tray.  Drizzle with olive oil and brush about a bit but don't worry that it will pool in the dimples.  Sprinkle the salt sparingly on top.

Bake for 30-40 minutes until golden brown and sounds hollow when tapped.  Eat hot or cool on a wire rack.

On the Stereo:
Just enough education to perform: Stereophonics
Posted by Johanna GGG at 21:23