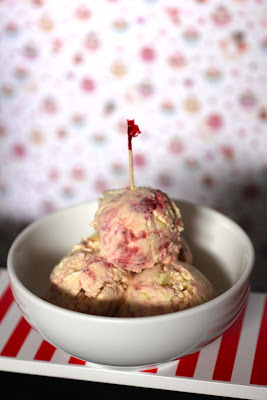 When I saw that Choclette was asking bloggers to make chocolate ice cream of some sort for her We Should Cocoa event, I instantly dismissed the idea.  It is the middle of winter in Melbourne after all.  I am not even that keen on ice cream in the middle of summer.  Then I lay awake planning the ice cream I would make.  I made a disastrous iced butter with raspberry swirls in my first attempt.  My next attempt - rhubarb and white chocolate ice cream - was far better. 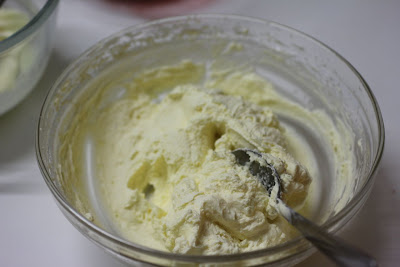 My siiblings and I often joke that we were so spoilt by my mum's delicious baked desserts that ice cream and fruit always seemed second best.  Of course the ice cream that I grew up with wasn't the gourmet flavours that are now available.  I never was much of a vanilla girl.  Nor was I ever interested in cream.  (And I have a niece and nephew who seem to have the same dislike).  I don't own an ice cream maker either.  Oh and I don't really like eggs.

I decided to try one of the no-churn ice creams made of cream and condensed milk.  (I first saw the recipe on Chele's Chocolate Teapot blog - the co-founder of the We Should Cocoa Event!)  It was the condensed milk that  I couldn't resist.  In fact as I made the ice cream and licked a spoon that had condensed milk on it, I found myself muttering, "Amazing!"  I consulted quite a few blogs and tried a rapsberry ripple and white chocolate ice cream. 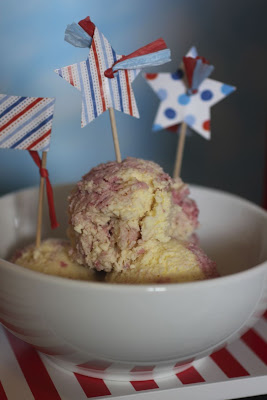 However not using cream very often might explain why I beat the cream and condensed milk so much that it was buttery rather than creamy.  I also melted the white chocolate with some of the condensed milk because my last foray into choc chips in ice cream resulted in rock hard chocolate.  I tried to swirl it quite unsuccessfully.  Not my finest moment in the kitchen.  Fortunately I have two ice cream enthusiasts in my house.  They loved the huge nuggets of fudge in the ice cream.  With some adjustments I think this ice cream would work well so I have included a recipe below. 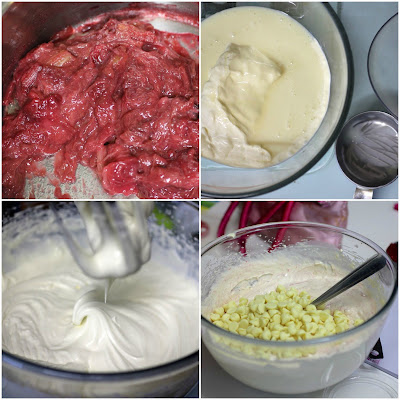 However my attempt a rhubarb and white chocolate ice cream was far more successful.  Inspired by the rhubarb sorbet at Stac Polly in Edinburgh last year, I knew this was an unusual but delicious ice cream flavour.  I found more inspiration online.  You can see above that I did a far better job at whipping the cream and condensed milk than in the first ice cream.  Yes, I was paranoid about whipping it too much and used the electric beaters on low. 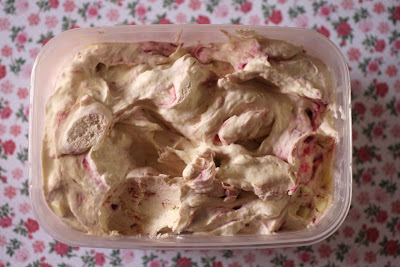 The ice cream was a success.  In fact I think this was definitely the easiest and best tasting ice cream I have ever made.  (Not that I have a great track record!)  It was creamy but satisfied me with the chunks of rhubarb.  I even could have had more rhubarb.  If I was to nitpick, it was perhaps a bit creamy and the choc chips were slightly too hard for my liking (I preferred the chocolate fudge in the rapsberry version).  My mum found it very sweet.  E drizzled some maple syrup on his and said he really liked the buttery texture of the raspberry ice cream. 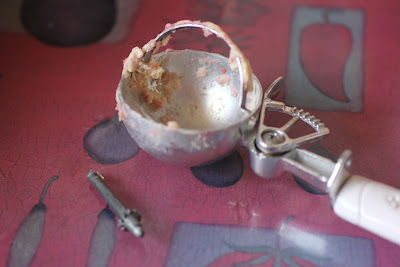 Leaving the ice cream out of the fridge for 5 or so minutes before serving is advised.  My trusty old ice cream scoop couldn't cope with the frozen stuff.  Fortunately (and strangely given my feelings about ice cream) I had a second scoop - a plastic one - that coped just fine. 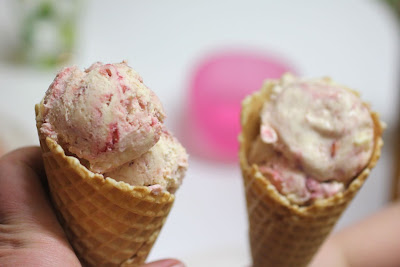 Sometimes we ate it in a bowl and sometimes in ice cream cones.  Sylvia was very excited about the ice cream cones.  When I took a picture of my cone she put hers beside it.  I also though I would include a photo of our new puppet theatre.  We went into K-Mart looking for a pinboard and came out with this.  It was fun using it to photograph the ice cream and Sylvia has been using it more as a shop (as demonstrated by Dolly) than a puppet theatre.  At least we are getting some use out of it.

While on an aside, I can share a little family anecdote.  I was so surprised when I told my mum that I was making ice cream with condensed milk and she said her mum used to do the same.  Strange.  I don't remember my grandmother ever making ice cream.  When I asked about it, my mum said it was when she was a kid.  Their fridge didn't have a freezer but it did have a little ice block compartment.  My grandmother would make ice cream and freeze it in small amounts in an ice block container. 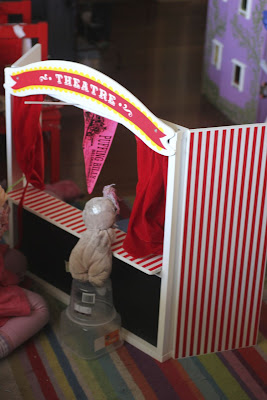 I am pleased to have finally tried this style of ice cream making and find it really does work well without an ice cream maker.  In summer I might experiment more.  I have been wondering if it is possible to make a vegan version with soy condensed milk and coconut cream.  Or maybe I could find a recipe for no churn ice cream without the cream.  The whole science of what makes ice cream creamy when frozen without an ice cream machine is still a mystery.  One that I am beginning to grapple with,  And loving it.

Beat together cream and condensed milk until thick and creamy.  (Do not overbeat or it becomes buttery.)  Fold through 1/4 cup of the rhubarb until combined.  Gently swirl through rhubarb and choc chips.  Pour into a plastic container and freezer for at least 6 hours before eating.

Place all ingredients into a medium to large saucepan.  Simmer on low heat for about 30 minutes until the rhubarb is quite thick and bubbly but at a little water if sticking to the bottom of the saucepan.

NOTES: This is a thicker rhubarb stew than I usually do but works in the ice cream.  It is also quite tart but again once paired with the sweet ice cream that is quite nice.

Gently heat raspberries with lemon juice in a small saucepan until you have a pulpy mixture.  Push through a sieve and discard the seedy stuff that is left in  a sieve.  Cool to room temperature.

Meanwhile melt 80g of white chocolate with 5og of condensed milk until a thick mixture.  I tried to swirl this through the ice cream but if doing it again I would spread into a brownie tin and cool.  Once cool I would cut into chunks.

Beat together cream and condensed milk until thick and creamy.  Swirl through the raspberry puree and white chocolate fudge chunks.  Pour into a plastic tub and freeze for at least 6 hours before serving.

On the Stereo:
While the Billy Boils: A Panorama of Australian Folklore: Various Artists
Posted by Johanna GGG at 22:06