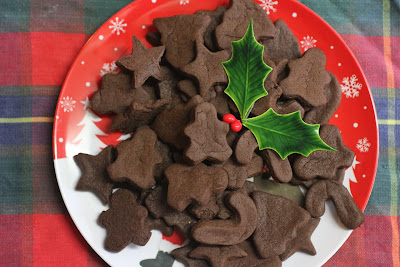 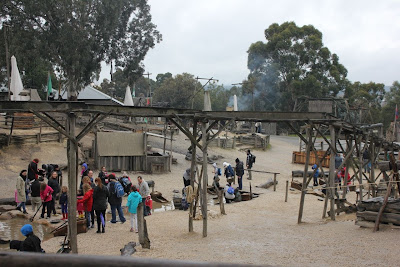 For those who don't know it, Sovereign Hill is in Ballarat, a little over an hour's drive from Melbourne.  It is a recreation of a goldfields settlement around 1850s Ballarat.  I have been going there since I was a child and seen it grow and develop into quite a complex history park.  And so it ought to be, with the entrance prices of $47 per adult.  Gulp!

Above are people having a go at panning for gold in the diggings that represent the time when there were just tents and bark huts.  It is best to go here first to get a sense of how it was in the early days of the gold rush.  As with other part of the settlement, we were able to talk to actors who play the parts of people from the era to add to the authentic feel of the place. 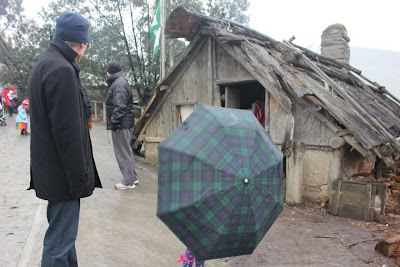 I have gone to Sovereign Hill many times before but I don't remember ever being there in such inclement weather.  It rained and rained.  And it was cold as you might deduce from the above photo of E.  I was glad I convinced Sylvia to wear gumboots with all the mud and puddles in this area. 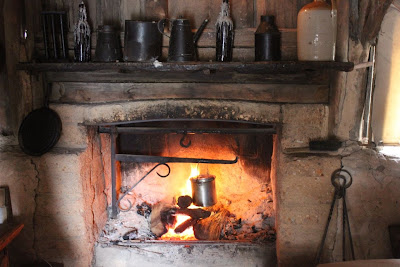 It was definitely worth visiting on a wintery day just to get a sense of how tough life must have been in these tents and bark huts.  This fire was in a bark hut.  It was warm but not enough to take off our coats.  The dark room was very basic with just one room and the chamber pot under the bed.  We saw one character in his tent cooking rock cakes in a Dutch oven with his window open for fresh air and the butchers was in the open air.  When you know how few of the gold diggers actually made their fortune, it does seem a hard life. 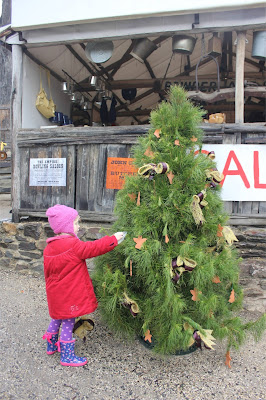 I suspect the gold diggers would not have been into Christmas in July but we were.  Here is Sylvia with the first Christmas tree she spied.  I really liked that the Christmas decorations were kept fairly simple.  The goldfields were not a place for fancy living.  Decorations would mostly have been made from what was about at home. 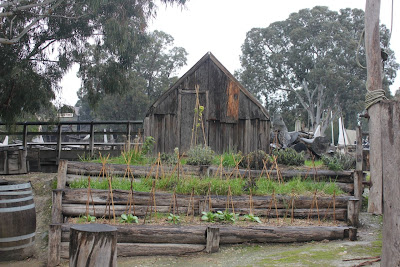 Before we leave the early diggings, I must share one of my favourite parts.  I have mentioned from time to time that I have a fascination with the history of market gardens.  It delights me that there is a market garden at Sovereign Hill.  It is part of the Chinese section of the diggings and an important part of Victoria's history. 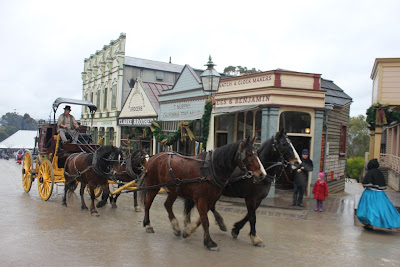 After the diggings we headed to the High Street which represents the goldfields when towns became more established and buildings more substantial.  This is more life as we know it, where we can wander along the street, ducking in and out of shops.  Sylvia just wanted to see the lollies.  E was fascinated by the cat in the saddlery.  I loved all the pretty crockery. 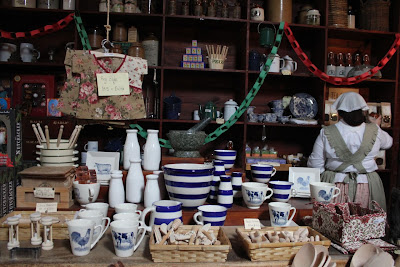 The shopkeepers are in character and address us as they might have in the era.  The shops sell the sort of goods that were sold back then.  I have a particular fondness for the grocers and the haberdashery.  When I was a kid I always loved the lollie shop, particularly the red horse head lollypops.

E was really there for the rare chance (in Australia) to see a Mummers play.  We sat in the foyer of the Victoria Theatre with a woman in a crinoline dress and talked to her about her costume.  She reassured us it wasn't as warm as it looked.   I had been in the theatre before but not to see plays.  Winter really does send us hurrying indoors as much as possible. 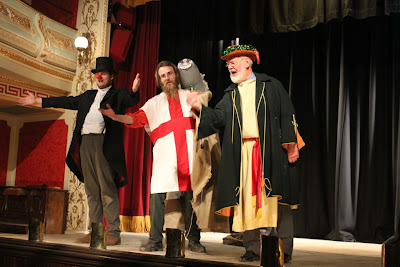 The Mummers play was called St Nick and Old Horse (above).  As is traditional, the actors were amateur and the costumes were minimal.  The theatre was packed and everyone had good fun both on and off stage.

We returned later for the pantomime, Beauty and the Beast.  This was also hilarious.  Not only did the actors play the pantomime characters but they also played characters that were actors in Sovereign Hill putting on a play.  I loved the quirkiness of two of these 'actors' deciding they wanted to be a pirate and a witch, with no relevance to the story. 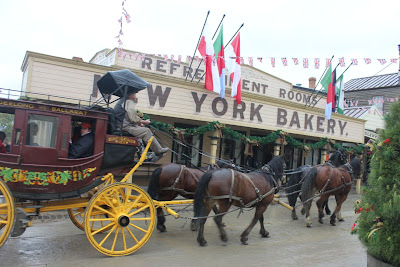 For lunch we went to the New York Bakery.  It was too cold to go down the street to the Hope Bakery or take a packed lunch.  (Later I saw the Sovereign Hill cafe.  It seemed too modern to fit in here but I didn't get close enough to be sure.  Maybe it is new.)  I was a little disappointed at the lack of warm vegetarian options.  E loved his turkey roast dinner but I had no festive options - only risotto or soup.  I chose the pumpkin soup and shared some chips with Sylvia. At least we could enjoy the Christmas decorations. 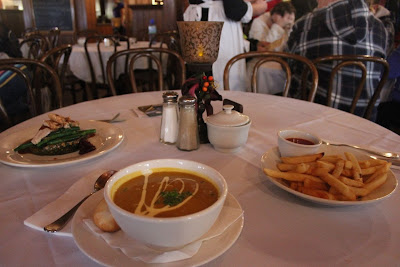 The most hilarious aspect of the Christmas in July was the snow.  Now in case you think this totally out of character for the setting, it does occasionally snow in Ballarat.  This, however, was not snow as we know it.  It snowed at precisely 1.40 and 3.30 when the snow machine was turned on. 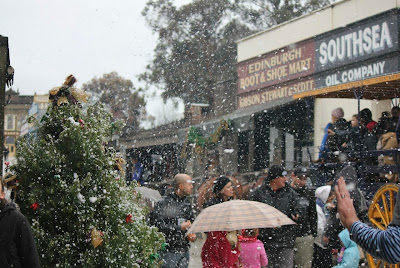 Our last Christmas in July activity was the kids decorating gingerbread Christmas trees (why are such fun activities always kids only!)  Sylvia loved it.  We left, feeling that we had done a lot but still not seen as much as we would have liked.  We never got to the school or the gold mine tour or to ride in the horse and carriage. 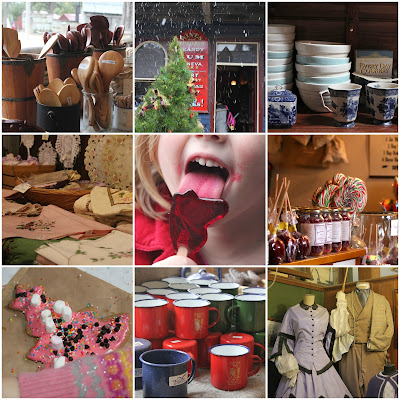 The next day we continued the festive cheer with a Christmas in July afternoon tea.  I had said I would take along something and made some spiced chocolate shortbread that morning.  It was lovely and chocolatey but I am not sure mixed spice was quite right.  Perhaps a different spice mix might work or I could leave out the spices altogether.  Sylvia loved helping to cut them out with the Christmas cookie cutters.  After a few days they were less soft but still good.  However we didn't have many at home to test how they lasted. 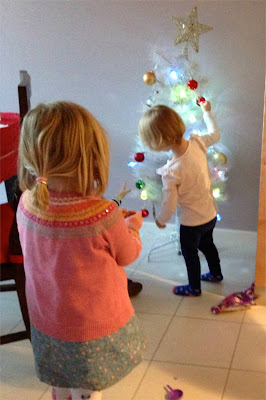 The afternoon tea was lovely.  Christmas carols, a tree, a reindeer antler headband, mince tarts, brandy butter and good company made for a very festive gathering.  One of the visitors had brought the brandy butter and gave a great recipe.  Mix in as much icing sugar into butter as possible because the more icing sugar the more brandy you can add.  It was a perfect accompaniment for Yav's warm mince tarts.

Previously on Green Gourmet Giraffe:
One year ago: Celery and blue cheese soup and Open House Melbourne
Two years ago: Apple Spice Cake
Three years ago: Christmas in July Cupcakes
Four years ago: Balancing Soup and Scones
Five years ago: Paella with thanks
Six years ago: Lasagne and the Boy Wizard

Mix flour, sugar, cocoa, spice, bicarb and salt in a large mixing bowl.  Rub into butter or margarine  until it comes together into a ball of dough.  Knead lightly for a minute or so until smooth.  (Alternatively this can be done in the food processor.)

Flatten dough into one large or two smaller discs.  Cover in clingfilm and chill in fridge for 1 hour.  Before taking dough out of fridge preheat oven to 180 C.  Then roll out dough to about 0.5 cm on a floured surface or if you prefer a cocoa and flour mixture so that white flour does not show on the finished biscuits.  (I can't remember where I picked up the tip to use cocoa instead of flour for the colour but I used half and half.)  Cut into desired shapes and place on lined baking tray - they don't spread much so just a centimetre or two needed between them.

Bake until the cookies change from shiny to dry.  I baked mine at 180 C for 10 minutes on the hot side of my slow oven.  (It Pleases Us baked theirs for 10-15 minutes at 175 C.)  Mine were very soft and I wondered if they needed a bit longer.  Their texture changes to more shortbread-like after a day or so.

On the Stereo
Fin de Siecle: Divine Comedy
Posted by Johanna GGG at 22:32