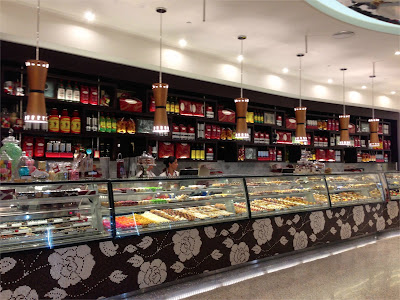 Lygon Street in Carlton is amazing.  It has been home to multinationals MacDonalds, Starbucks and Borders.  Each of them has closed their store here.  Yet local independent businesses Readings Bookstore and Brunetti cafe are going from strength to strength.  No doubt the proximity to The University of Melbourne helps.  I have been visiting Brunetti's cafe for years (decades actually).  Recently it has move premises and expanded in a spectacular way.  It is time I wrote about it. 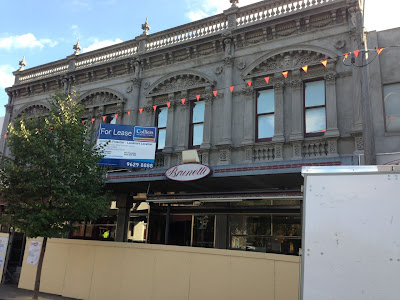 A few months ago I decided I would go and take a last photo of Brunetti's before it moved.  Above is the sight that greeted me.  The last visit was only weeks before with my dad and Sylvia on her birthday.  It made me a little sad as Brunetti's has been in Faraday Street ever since I moved to Melbourne after leaving school.  But it was always a little out of the way. 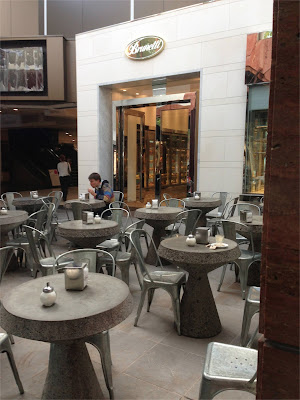 Of course I was curious to visit the new Brunetti's around the corner in Lygon Court (above).  I hope it will convey the size of the shop if I tell you that it has taken over the huge space left when Borders closed last year.  The concrete tables have been moved from the old Brunetti's.  They are a bit grey for my liking but inside is a different story. 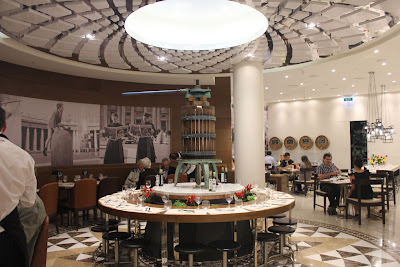 Inside is marble tiles, pretty light shade covers, huge black and white photos of recognisable faces, objects of interest and rows and rows of food for as far as the eye can see.  The space is huge and yet it is cleverly partitioned up into smaller spaces that are quite cosy. 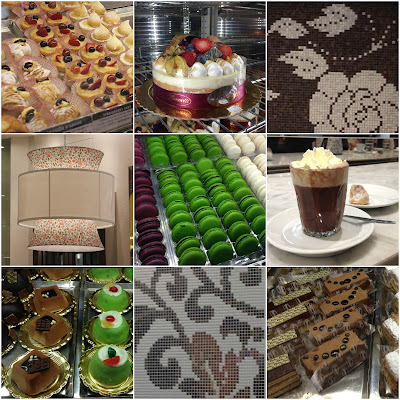 Brunetti's has always been fun to visit and pour over dainty Italian cakes.  They are not the sort I grew up eating.  I still remember going to Lygon Street after my first Open Day at the University of Melbourne and being treated to a chocolate eclair.  I think I was upset when I found it was filled with a custard rather than the cream I was used to.  That was not an eclair as I knew it.  Years later I have a rather expanded understanding of cakes and pastries. 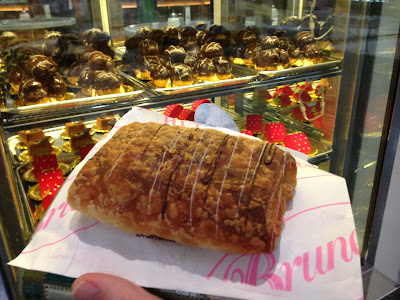 On my first visit to the new Brunetti's cafe, I came away with a warm flaky chocolate croissant from the bakery section.  The many sections - bread, pizza, gelati, cakes, coffee etc - give you an inkling of the breadth of the range of food.  Most of the food is out on display but there is a menu with many Italian standards such as pasta and risotto that you can order from in the restaurant or at the counter. 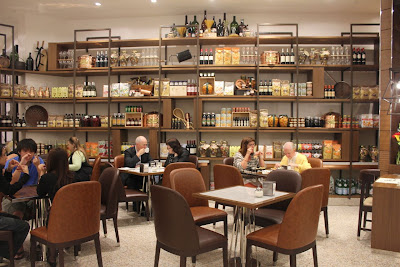 And you can eat anywhere.  You can sit on a stool looking out into Lygon Plaza (for excellent people watching), in a restaurant (above), by an old coffee machine, outside at the concrete tables, in tables in a cosy nook, or on high stools at a bar.   Or on a balmy summers night you can take your focaccia or gelati and eat it as you walk down Lygon Street or sit in a park. 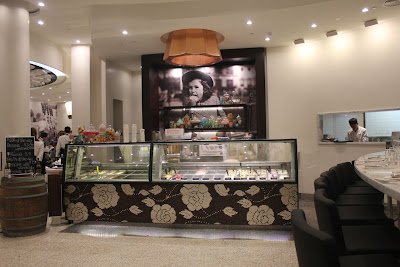 I am including this above photo of the gelati area.  It is hard to believe how spacious it is.  This is significant to me because I remember Brunetti's when it was just a little shop with two small rooms.  In one was the gelati along with lots of little chocolate and wrapped sweeties.  The cake display was in the other room.  This was before the first expansion in the former Faraday Street store.  I must have gone there on quite a few occasions because I had a favourite gelati.  One scoop of raspberry and one scoop of baci.  It was heavenly.  I remember going there with fellow students and crowding into that tiny space. 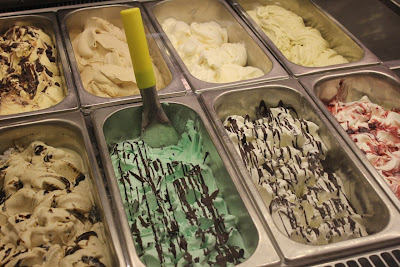 The gelati display now looks appetising and colourful but I was disappointed to find there was no baci (chocolate and hazelnut) flavour.  Possibly there will be more options in summer when the gelati is more sought after. 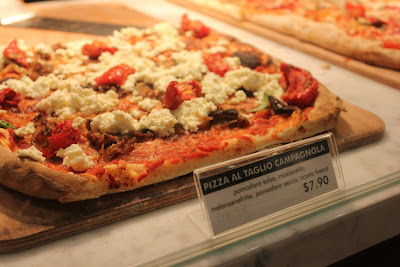 I also have strong associations between going to the Cinema Nova (not that it was there when I was first at university) and grabbing a coffee and cake afterwards.  So it was that soon after Brunetti's moved to Lygon Court, E and I decided to have dinner there before a film (Trance - not a film I would recommend).  We both chose pizza and shared a salad. 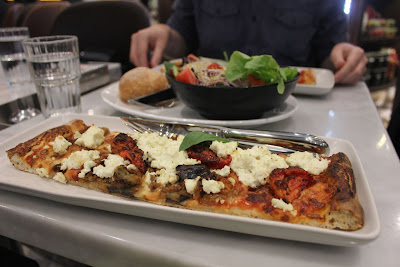 I chose the Pizza al Taglio Campagnola with "pomodora salsa, mozzarella, melanzanefritte, pomodoro secco and ricotta fresco".  I had to check if the pizza was vegetarian because the names were only in Italian and my Italian is not that good.  When it came (with tomato, eggplant, mozzerella and ricotta), I was surprised at what a large slice I had.  It was very good and the garden salad, which came with a bread roll, was also good.  (The dressing came in funny little bottles so we had to check with a waiter about opening them.) 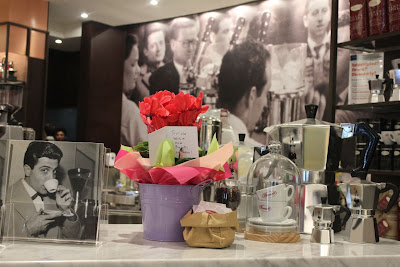 As you may have gathered by now, there is a hint of theatricality about the place.  Presentation is very important.  This is a space that is created to transport you to Italy.  In fact they hit the headlines with a  news story about needing to employ Italian staff.  (Though if this was the case, I don't know why the first waitress I asked about the pizza didn't know any more Italian than me).  It is best seen in the section where the baristas make coffees like they are dancing a ballet.  This is the first thing you see as you enter from Lygon Court.  The coffee dance is framed through the large doorway like a prosceum archway.  (See below photo) 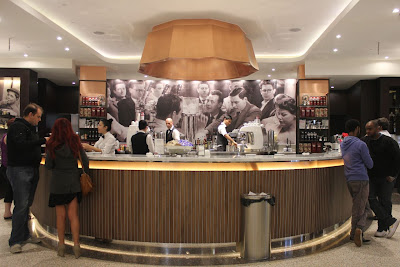 After our dinner, E and I decided to have a cake.  Cake at Brunetti's is brilliant.  You are sure to find something you like among the rows of cakes, tarts, pastries, macarons, chocolates.  Some are large enough to share and others are just a mouthful.  I chose a small sacher torte and E chose a strawberry tart.  Both were delicious wee morsels. 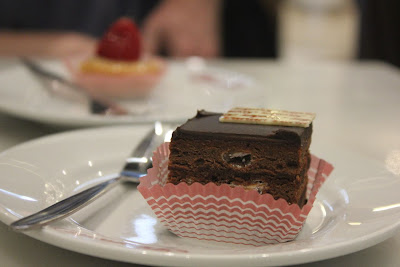 More recently I went to Brunetti's with my friend Heather when we saw Farewell My Queen at the Cinema Nova (a movie I highly recommend).  We went on the Queens Birthday holiday afternoon and stopped for a coffee and chat after the film. 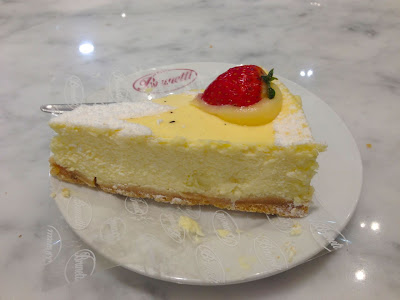 I eschewed a hot drink in favour of a slice of New York cheesecake.  It was a baked cheesecake that was incredibly soft and fluffy but with a hint of lemon.  Heather had a cream topped hot chocolate and a small biscuit.  No wonder Brunetti's has expanded to more cafes around Melbourne 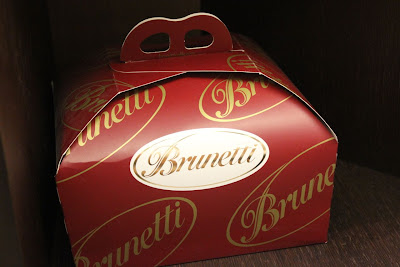 If you look in the display cabinets you will see that whole cakes are also on offer.  Around Carlton they are well known.  Whenever there was a birthday or other celebration at my university workplace, the instantly recognisable Brunetti's box would often appear.  And we could be sure there would be something delicious inside.