The helix tree, the dodgy tart and a rather good soup 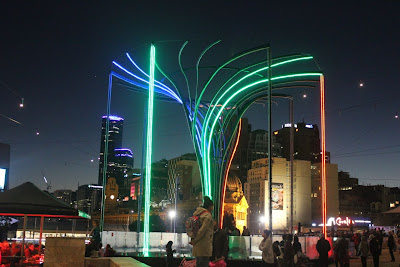 Sylvia had requested Mazzy Star on the stereo.  I put the CD back after playing it and my eye chanced on the Manic Street Preachers next to it.  We listened to it.  It brought back the time I met E when I saw the Manics at T in the Park music festival and enjoyed Nicky Wire's wit in the NME.

How freaky was it that on the same Saturday evening, I went to Federation Square and heard the back announcement as the music finished.  Unbeknown to me, we had been listening to the Manics who were touring Melbourne.  How was I to know when all I could see was the red jerseys of the rugby fans!  I just wished I had paid more attention. 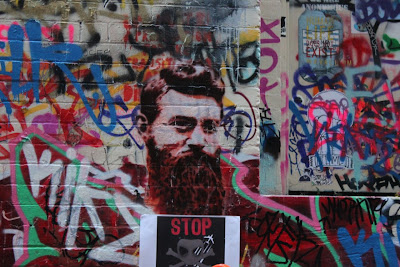 If I had known the Manics were playing an acoustic set I would have stopped and listened.  Sylvia and I were there for the Helix tree, a light installation that could be seen in Fed Square in June.  We got there early so we walked over to Hosier Lane to look at the street art (above). 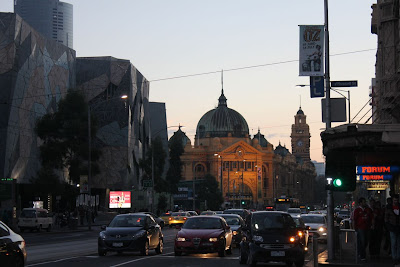 Then we walked back over Flinders street to Fed Square.  For those who don't know Melbourne, the glowing yellow building in the distance is our iconic Flinders Street train station.  New proposals were announced for its redevelopment this week (with a request for the public to vote for their favourite).  I am both excited and scared.  I am not against architects with brilliant vision but Flinders Street station is so precious that I don't want it to lose its charm. 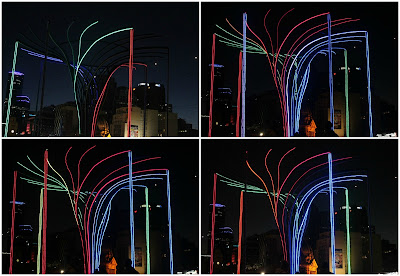 Once it got dark the Helix Tree began to light up.  I had been fascinated to hear about it.  Each night in June a community choir would sit and the lights on the tree would then be activated by the sounds.  Light rippled across the iron structure as they sung.  (See my daytime photo of the helix tree structure.) 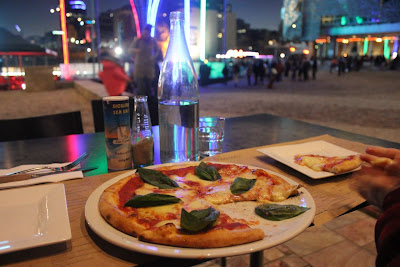 Not wanting to just stand in the cold, I found us a table in the square overlooking the tree and ordered a margherita pizza for an astonishing $20.  I don't even like to think how this compares with the pizzas we make at home.  I just told myself that the inflated price included watching the light show. 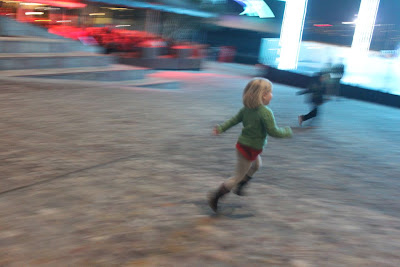 Sylvia wasn't very interested in the pizza.  She was more intent on running  around the large open space.  Her coat didn't stay on her long.  How do these little people have such great reserves of warmth that they don't want cardigans, jackets and blankets! 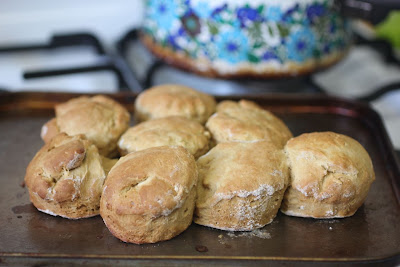 I suspect one reason she wasn't very hungry is that I had made us treacle scones for afternoon tea.  This time I used a recipe from Ena Baxter (of Baxters Soups) rather than my usual.  The very first time I made treacle scones they were fluffy and plentiful - possibly due to my mum helping me measure out the milk.  Every since they just seem to make embarrassingly small batches and not as fluffy as a scone should.  E's granny would turn in her grave! 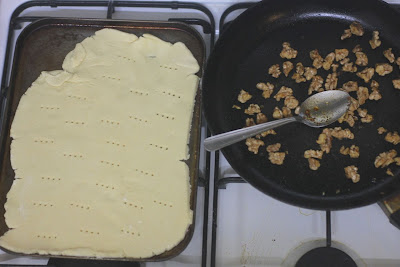 It wasn't my finest weekend in cooking.  On the Friday night I had been adventurous and adapted a chard, squash and stilton tart to use up some of the ingredients bursting out of our overflowing fridge.  My slow oven and my lack of pastry experience let me down.  The tart would have been fine if I had only read the recipe closely and baked it til it was golden brown. 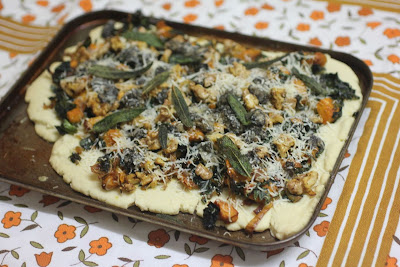 Actually E probably would disagree.  He didn't like the blue cheese.  It was rather strong but I though it worked with the rest of the ingredients.  Sylvia just ate the pastry around the edges with no topping.  At least we all enjoyed watching The Ringing Singing Tree (or was it The Tinderbox that came in the same DVD set?). 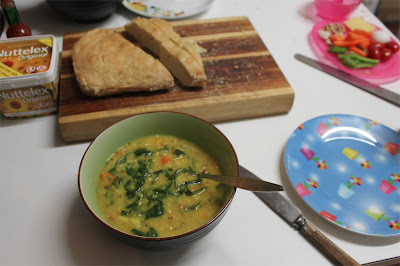 The next night I made a red lentil soup with spinach and lime.  It was very nice but I was a bit unsure if the lime was too sharp.  Sometimes it is hard to cook from recipes without tasting the dish first.  Yes, I could read a recipe more closely but scratch and sniff computers would be more fun.  The soup tasted lovely and healthy with my no knead focaccia.  There were no complaints.

Finally to return to the coincidence at the start of the post, I will share a few other unlikely moments:

I am sending this tart and soup to Jac of Tinned Tomatoes for  Bookmarked Recipes (July #25) because I found both in my Delicious bookmarks through searching for ingredients I wanted to use.

Mix red lentils, parsnip, carrot, turmeric, salt and water into a large saucepan.  Bring to the boil and simmer for 15 minutes or until vegies are soft.  Meanwhile in a separate frypan, fry onion, cumin seeds and mustard seeds gently in olive oil for about 15 minutes or until the onion is soft.  Add to lentil mixture.  Mix in lime juice and spinach leaves.  Stir briefly until the leaves wilt.  Serve hot.

To make pastry:
Briefly mix flour, sugar and salt in the food processor.  Add butter and continue to process til it takes on the texture of coarse breadcrumbs.  Slowly add water 1 tbsp at a time until the pastry comes together into a ball.  Cover with clingfilm and chill in fridge for 30 minutes.  Roll out  and I quote "into a rought circle" - I didn't know how thick and probably did it about between 0.5 and 1cm thick.  Prick with a fork and bake at 200 C or until golden brown.

To make spiced walnuts:
While the pastry is chilling,  heat a little olive oil in a non stick frypan and stir in walnuts and seasonings.  Gently fry until the walnuts smell cooked.

To prepare vegetables:
In a separate frypan or use the one you did the walnuts in, fry the onion slices and then the kale in some olive oil.  I didn't take note of timing.  Mix cooked onions and kale with pumpkin.

To assemble:
Scatter cooked pastry with pumpkin mixture, then walnuts then cheeses.  Bake at 200 C for about 10 minutes or until just warmed through.

To fry sage leaves:
Heat butter in frypan and gently fry sage leaves.  You will know they are ready when they are quite stiff when you turn them over.  Drain on kitchen towel.

On the stereo:
Everything Must Go: The Manic Street Preachers
Posted by Johanna GGG at 23:23