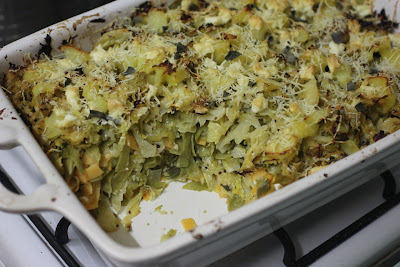 'Tis the season for hearty winter bakes.  I saw this mustardy cabbage pasta bake on the ever-reliable Where's the Beef.  As is often the way with these dishes, my timing was out and we ate late but once it was made I had leftovers for a couple of nights.  I really enjoyed this, especially with the feta after seeing Cindy's advice about the cheese. 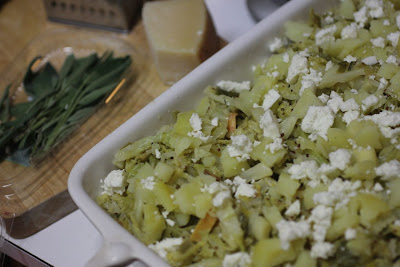 I used a capsicum and spinach fettuccine from the Coburg Farmers Market.  It was superb.  Opening the bag, I was struck by a whiff of capsicum.  And it cooked in no time at all.

I tried using a mixture of potatoes and parsnips but I am not sure this worked so well.  I enjoyed the potatoes crumbled rather than in large slices.  Possibly the parsnip would have worked cut into small pieces.

I also found that the fettuccine would have benefited from a bit more flavour - though it improved on the second and third night.  I wondered if it would have been better tossed through the cabbage mixture. 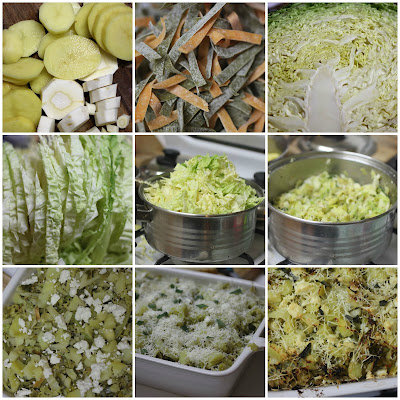 I really enjoyed this bake.  It wasn't fancy but it hit the spot.  E's main quibble was that he would have liked this more crispy on top.  I baked it again the next night and his wish was granted.  A couple of nights of leftovers gave me more time to make ice cream and birthday cards.  Here is one of the recent birthday cards I have made. 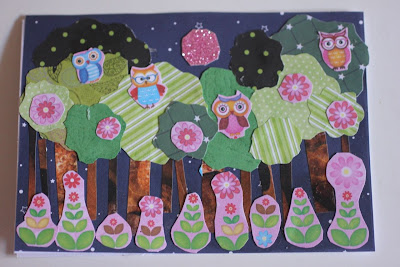 Update 2 August: I am sending this pasta bake to Catherine of Cates Cates who is hosting Pasta Please event (founded by Jac of Tinned Tomatoes) in August with the theme of Pasta Bakes.

Peel, thickly slice and boil potatoes with a pinch of sea salt for about 15 minutes or until soft.  Crumble cooked potatoes.

Break fettuccine into 10 cm segments.  Cook in boiling water with a pinch of salt until al dente - mine took about 5-6 minutes - and drain.

Fry leek in butter for a few minutes or until soft.  Stir in garlic.  Add cabbage and stock.  I was using a large saucepan but a stockpot would have been better as it was so full I could barely stir it.  Place lid on and allow cabbage to wilt with the steam.  Stir in mustard, 1/2 cup of the parmesan and 1/2 the sage.  Best to have a bit of liquid left in this mixture because the pasta will soak it up.

On the Stereo
Boy Child: Scott Walker
Posted by Johanna GGG at 21:53