Spinach crackers and hummus for a potluck 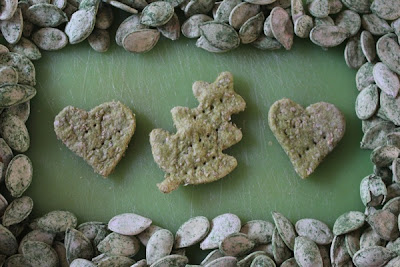 After the unravelling of my plans for a green vegan potluck for bloggers on St Pat's Day, it was postponed until the last weekend in March.  Which was fine.  The purpose, after all, was to eat lots of yummy green food and get together with some local bloggers. 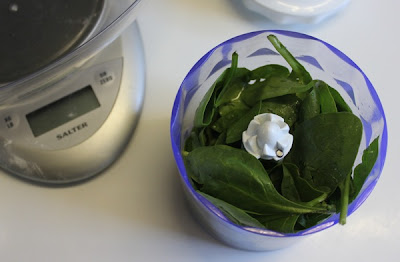 In an attempt to plan ahead, I had a practice run of spinach crackers and zucchini cake ahead of time.  Yet the day of the potluck still found me up early baking cake, making crackers, riding to the supermarket for a last minute purchase, whipping up cream cheese frosting, whizzing up some green hummus, chopping vegies and tidying up, while E kept our dishes and young child under control. 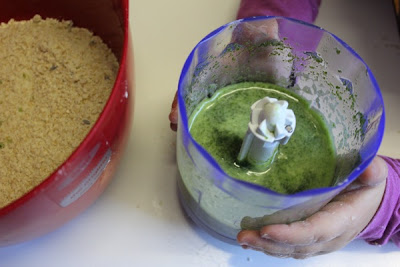 I'd instantly bookmarked the spinach crackers that Angela had posted on Oh She Glows recently.  I loved making the green sludge of spinach and water that held together the flour and butter.  As with Angela's crackers, the mixture was greener raw than cooked but still retained enough colour to please. 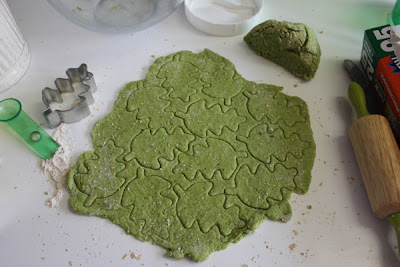 I was also very pleased with my new purchase of French lavender salt (salt, coriander, aniseed, lavender, fennel, chilli pepper, garlic, ginger).  It gave amazing depth of flavour to the crackers.  They were an instant hit with everyone in the household. 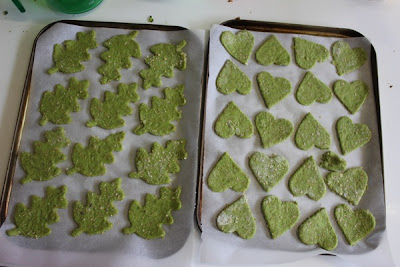 I also made some spinach hummus.  It didn't have the brilliant green of Angela's but it was rather tasty so I have included the recipe I used below.  In addition to crackers and hummus, I chopped up green vegies and had purchased a few green snacks.  We loved the pea snacks from Miaow Miaow - E said they were a bit like cheezels (think flavoured fibreglass!) but greener and tasted more of pea than cheese.  The green tea pumpkin seeds were less successful but interesting to try.  I bought wasabi peas for others because they are too spicy for me.  Lastly I bought a packet of edamame. 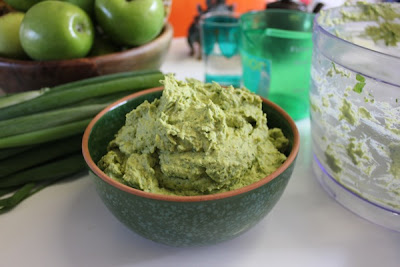 Our guests added to the spread of green food.  I asked them to bring vegan food as the majority of people I invited were vegan bloggers.  Mel of Veganise This! brought along spinach arancini with tofu bacon stuffing - she knows how much I loved tofu bacon.  Michael of Where's the Beef not only brought along a spicy but tasty Green Couscous Salad but also wore a green t-shirt with a giraffe on it! 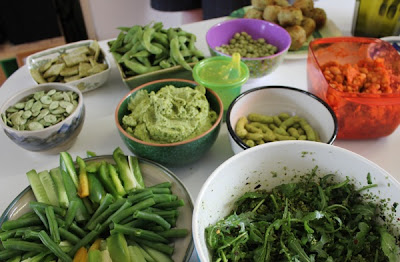 You might notice not all the food was green.  I didn't want to be didactic about green as a theme so I left it to bloggers to interpret it.  Cakelaw of Laws of the Kitchen took a lateral approach and interpreted it as environmentally green and bought a hearty Cannelini Bean Casserole that complemented the other dishes perfectly. 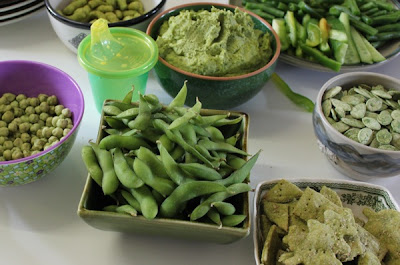 Dessert also had plenty of interesting flavours and textures.  Alexe of Soy and Chocolate (and partner Steven) brought along an impressively high vegan gluten-free chocolate cake with green avocado frosting.  Cindy made delicious mint choc chip ice-cream (my favourite flavour as a girl) that astounded us because it was dyed green with spinach.  I made a very soft zucchini cake with green cream cheese frosting (post on this to come).  Cakelaw made some healthy and berry nice Buckwheat Apple and Berry Muffins.  Mel brought along Pistachio Burfi - a lovely soft nutty fudge (not pictured).  E loved it even better than most Indian sweets because it wasn't tooth achingly sweet. 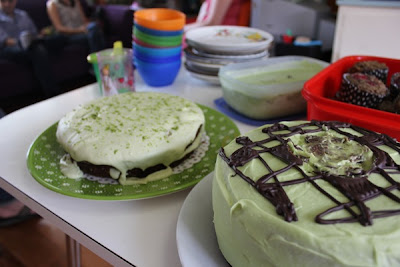 It is always a joy to share a meal with bloggers, taste their recipes and meet some new faces.  We chewed the fat over Blogger, captcha codes, urls, copyright, travel, recipes and where to buy liquid smoke and edamame in Melbourne.  Cindy had kindly brought me a bottle of liquid smoke.

Sylvia was very shy when Cakelaw first arrived but warmed up.  She and Dolly had a lovely time entertaining everyone once Sylvia had eaten all the edamame she could.  Sylvia slurped her melted ice cream.  Dolly beeped.  Sylvia sang.  Dolly cried when she was hit by another doll.  Sylvia threw Dolly to me to catch.  Sylvia threw herself to me to catch.  Dolly jumped.  Sylvia asked why cake need icing (to which Cindy replied with great sweet tooth wisdom why does icing need cake)!  She was so enthusiastic about our visitors by the time Mel left last, that Sylvia was begging to go home with her. I was also sad to see everyone go.  It has been a good lunch.  I hope we might do it again.

I am sending the Spinach Crackers to Jacqueline of Tinned Tomatoes for her Bookmarked Recipes event.

Place flour and salt into a medium to large bowl and rub in the butter until you have the consistency of fine breadcrumbs.  Blend water and spinach until smooth and add to the flour mixture.  Stir until combined and then knead lightly on a floured surface.

Cut dough in half and roll out one half until quite thin.  Cut out shapes or cut into rectangles with a sharp knife and transfer shapes/rectangles to prepared trays.  Prick with a fork (or I found that they develop air pockets in the oven).  Repeat with remaining dough.

Bake until lightly browned and dried.  Angela suggested 9-10 minutes.  They took 12-14 minutes in my oven which is not very powerful.  A few got quite brown and were quite crispy rather than slightly chewy.  Cool on a wire rack.  Ours have only kept a few days.

Process the spring onions, parsley and garlic until finely chopped.  My food processor couldn't cope so I finally took it out and finely chopped it.  I returned it to food processor and added remaining ingredients.  Puree.  Check seasoning and adjust until the flavours were balanced nicely.  Keep in the fridge in an airtight container for a week or two.

On the stereo:
Sleeping Beauty - 23 Alltime Favourite Songs & Stories: Jack in the Box
Posted by Johanna GGG at 23:52