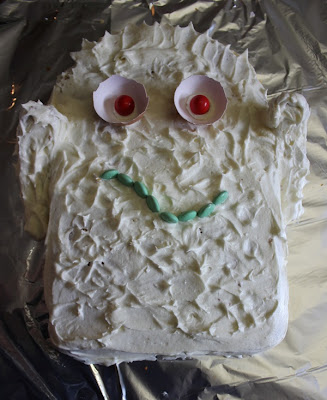 Let me tell you a terrible secret.  This year I was tired and felt a bit low on ideas for E's birthday.  I thought maybe I wouldn't do one of the novelty cakes that I love making.  Then I found one that was easy to make and that he just loved.  This ghost birthday cake demands very little in the way of cutting shapes, decoration or even colouring the icing.  Yet it is still impressive and fun.  It is so easy I am considering making it every year for him from now on.  (Even if the eggshell eyes are a little odd!) E now shares his birthday with my blog.  It is 5 years old today.  He got lots of wonderful presents, including chocolates, a graphic novel of Hamlet, a diamond jubilee tea towel, a record player and a gomnie in the garden (the gomnie is the one with the red hat that Sylvia spent a lot of time telling her dad about before his birthday!!!).  My blog gets a piece of doggerel.  Hey!  It's my blog and I will write bad poetry if I want to!  After all birthday are meant to be a little self indulgent:


Happy birthday GGG
It's my blogiversary
I've been blogging for 5 years
About breakfast, lunch and tea.

In the spirit of self-indulgence, I will pause here to reflect briefly on how much I love blogging!  Since that first post five years ago, I have learnt so much, met lots of interesting people and cooked lots of yummy food.  I do a regular round up at the end of each year so I will until then for the naval gazing and just say a simple thanks to you who support me and read my posts.  Regular readers might have noticed that I am posting a bit less often right now.  Life is busy and demanding but over the years I have noticed my blogging energy wax and wane.  If I can be sure of one thing, it is that life will keep changing, just as this blog does. 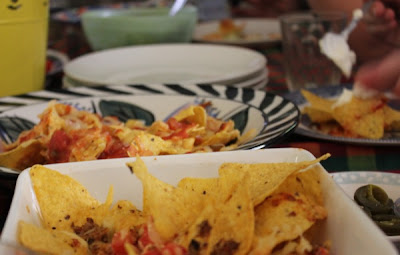 We had a celebration lunch in Geelong with my family.  Upon arriving, my mum served treacle scones especially for E.  At the birthday boy's request, I made haggis for Haggis Nachos and my mum did a Mexican feast of tacos, nachos, three different chilli con carnes, guacamole, and lots of other side dishes. 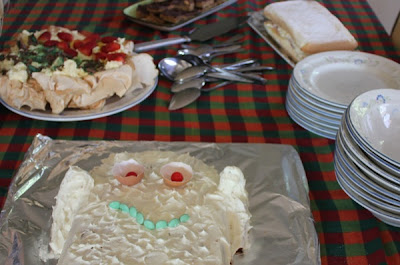 At dessert time, E blew out candles on his ghost cake and my brother in-law John who has a birthday around the same time blew out candles on the sponge layer cake that my sister Fran made for him.  We also indulged in some of my mum's pavlova (half peppermint crisp topping and half strawberries and passionfruit) and a gf chocolate caramel slice. 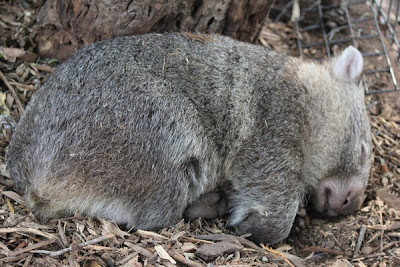 We had planned to go a Jirrahlinga Koala Wildlife Sanctuary before the birthday lunch.  Life being hectic and disorganised, we ended up going after lunch.  Most of the wombats, E's favourite animals,  were sound asleep.  He loves them because they are so sleepy (and snuggly), so it didn't bother him at all.  Though he did enjoy watching one that was snuffling about in its food scraps. 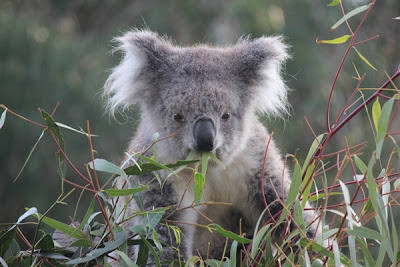 More alert were the koalas.  In fact, I don't think I have ever seen such active koalas before.  Most of my sightings of koalas have been curled up in a furry ball up a tree (like these).  Even on a couple of occasions at wildlife parks (including Jirrahlinga) when I have come across a zookeeper with one in their arms, they have been more snuggly than lively.  On this trip they were sitting up in the trees grabbing at pawfuls of leaves and stuffing them in their mouths, scratching and stretching and looking about.  We decided that later in the day was a good time to visit.  It was definitely a quiet time of day to be there. 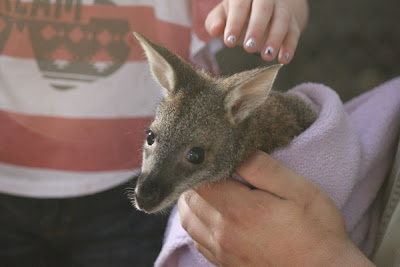 We had a lovely time with some curious kangaroos.  My dad chatted to the cockatoos.  E and Sylvia went off in search of foxes.  Quin avoided the snakes and did silly dances with Maddy.  Ella mused about how she might be a zookeeper when she grew up.  Then just as we were about to leave, a zookeeper came along with a little joey in a pouch.  The mother kangaroo had died and so the staff were looking after it.  It was a sweet wee thing that didn't mind us patting it.  A great way to end the visit.  E and Sylvia and I then drove home for some Haggis Pizza and so-so DVD, Gnomeo and Juliet.

Bake the cake the night before, if possible.  When ready to decorate the cake, find an appropriate board to present the cake on.  I covered a baking tray with foil and later remembered that it might be better to use my cake tin with a cover for transporting it in the car but by then it was too late. 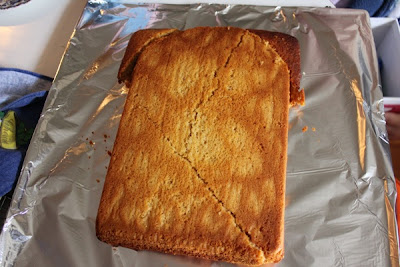 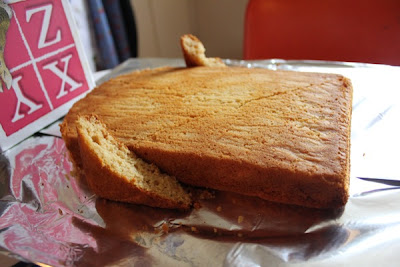 *Buttercream frosting notes: The book called for white and fluffy royal icing but I avoid uncooked egg whites.  Instead I made buttercream frosting by beating 125g of Nuttalex margarine (to have it whiter than butter) until fluffy and then beating in 1 and 1/2 cups of icing sugar.  It was only just enough and I could have done with slightly more.

Spread buttercream frosting over the top and sides of the cake.  Use knife to make peaks in the icing, including peaks to indicate hair. 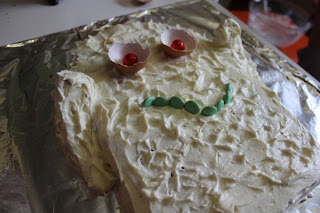 Now decorate with lollies.  Place the egg shells where the eyes will be.  Spoon a dot of buttercream frosting in each egg shell and place a jaffa on it to be the eyeball.  Position the green lollies into a crooked line to make a spooky smile.  The book advised covering the plate or board with pink coloured coconut to surround the ghost but I didn't have time. I don't think it needed the coconut, though it might have been nice.  E was very pleased with it.  So is GGG!