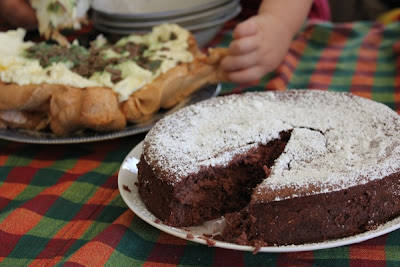 My weekend was full of good food, good fun and some surprises.  I had the pleasure of an unexpected evening swim on Sunday after a day with my family.  Unfortunately not all surprises were so lovely.  On Saturday night as I was heading to bed, I discovered that the cake that had gone in the oven after dinner was still there. 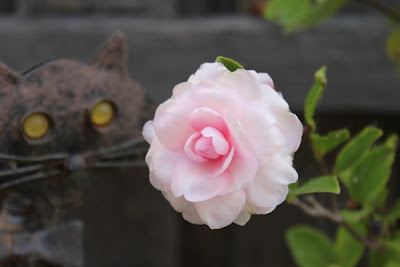 Another vexatious discovery was that Sylvia was fond of picking the first camelia flowers of the year.  Fortunately there are quite a few flowers appearing so she can't keep up!  I enjoyed my Saturday with a visit to Little Deer Tracks (the menu is much changed since last visit and the portobello mushroom burger was not to my liking but most probably would have appealed more if I hadn't slept in and had a late breakfast) and a new television.

Some of the blame for the overcooked cake might rest with the new telly.  When the timer rang, the cake was slightly undercooked so I returned it to the oven for another 5 minutes and set the timer.  I had forgotten that the timer doesn''t ring if just set for a few minutes.  Not good when I was fixated on a new telly that seemed like a miracle after weeks of being unable to watch our favourite channel (the ABC). 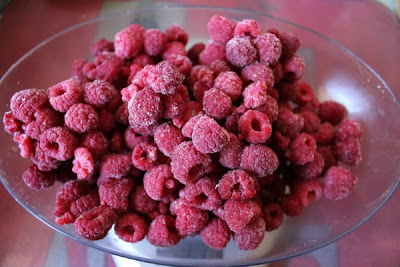 The first cake I had made was inspired by Choclette's Raspberry Chocolate Polenta Cake.  I used passionfruit chocolate instead of raspberry chocolate but liked the idea.  I have made a very similar Chocolate Polenta Cake in the past that was too grainy.  This was the case again with the overcooked cake.  We gouged out some of the middle for breakfast.  I hope to return to it some day but when I have found some fine cornmeal. 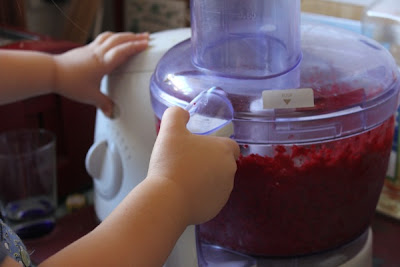 I had made the cake the previous night when Sylvia was in bed.  But on Sunday morning I decided I couldn't take the cake to the family lunch as intended so I would just have to make another.  With Sylvia!  It was a chaotic morning.  I scanned more recipes while eating chocolate cake for breakfast.  I decided I really wanted a chocolate raspberry cake and it was to be gluten free so everyone could eat it.  Apparently this wasn't everyone's cake of choice.  As we drove to the supermarket, Sylvia was on her toy phone to my mum asking her to make a white sugar cake. 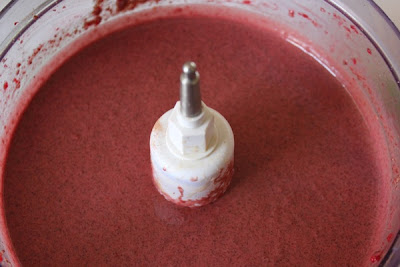 The cake I chose to make was inspired by Lucy's Chocolate Apricot Cake.  I was emboldened by her sense of adventure in substituting apricots for orange in Nigella's Clementine Cake.  I couldn't find a recipe for my vision so I decided to follow Lucy's lead and substitute raspberries.  As you can see, the mixture was very very red.  Sylvia took charge of the food processor, which at least delayed the latest camelia flower being plucked from its branch.

Once the cake was in the oven, we watered the garden, Sylvia picked another flower, we laughed at Zinc sitting on the windowsill in the bedroom looking out at us, then we squeezed the juice of the zested orange to drink and ate the remaining half-frozen raspberries from the packet.  The cake was still quite warm when I wrapped it in a teatowel and we headed off to Geelong for our family lunch. 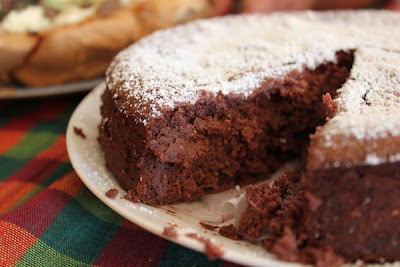 The lunch was the last with my sister and her family before they headed back to Ireland.  My mum served a wonderful baked eggplant and tomato dish, as well as roast potatoes, salad, and pastisti.  I took down a bag of edamame.  Sylvia adores it and it is such an easy nutritious snack for her.  Dessert was a great spread of pavlova (you can see from the top photo that Sylvia loves this too), mango cheesecake, fruit salad, sponge cake and my chocolate cake.

The chocolate raspberry almond cake went down well.  It was eaten in small slices with cream because it was very rich.  I found it quite light - almost mousse-like - and more fruity than chocolatey.  It wasn't all eaten at the dinner and I think it was better later in the day when it had settled and was less fragile.  If I would to make it again, I would be tempted to try 5 rather than 6 eggs and some melted chocolate to give it a firmer texture.  But I think my preference would be to find a good sturdy chocolate cake with studs of raspberries through it.  If only I had more time to experiment. 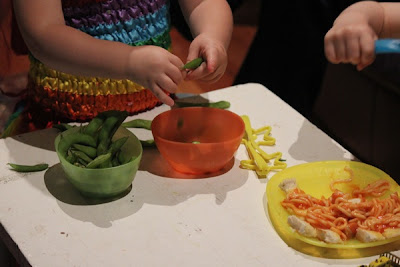 It was a lovely day with the family.  After lunch was a family photo and then E got out his ukelele and jammed with my niece Quin on piano accordion in the garden while Sylvia and Dash played with hoops and Maddy did gymnastics on the grass.

We made a last minute decision to stay in Geelong so that Sylvia and Dash could go for a swim at the local pool together.  This meant we had dinner at my parents' place and got home rather late. It was worth it to see the two cousins swimming together and so gorgeous to watch them giggling at each others jokes.  They loved sharing their own three year old perspectives on the world.  We were sad to see Chris, Fergal and Dash go home.

Blend all ingredients in food processor, scraping down the sides a couple of times as necessary.  Pour into greased and lined 22cm round cake tin and bake at 180 C for about an hour.  It is done when a skewer comes out clean but I found I also needed to check that the middle sprang back when a finger was gently pressed on it.  Cool in the tin.  (NB My cake had a big crack in it.)  Dust with icing sugar and serve with cream.

On the stereo:
The Music of Ennio Morricone (free CD in The Sunday Times)
Posted by Johanna GGG at 23:57