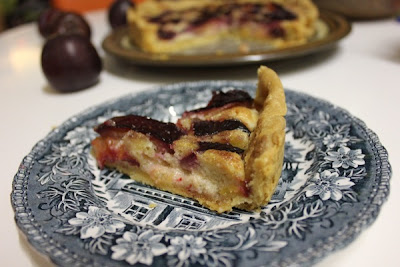 On the weekend we turned the clocks back for the end of daylight savings.  The days are milder but still pleasant for children to play outside.  The nights are darkening.  When I rode home last night the streetlights were on.  It must be plum season.  Which means time to heat up the oven and bake.

Plums are the only stone fruit I seem to bake with.  Peaches, apricots, and cherries all are in season when it is too hot to bake.  Plums arrive just as the weather cools enough to make baking a pleasant prospect.  When I bought some plums, I decided to try a plum tart from Smitten Kitchen. 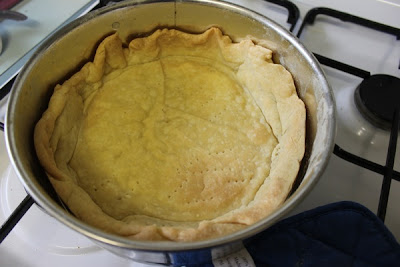 You only need to look at the above picture to see that I am no expert at pastry.  I rarely make it.  Even so, I was surprised to find that I did not have one dessert recipe with pastry in my recipe index.  I don't have the right tins and I was not helped by my poor translation from Fahrenheit to Celcius when baking the pastry.  My oven is usually so slow that it wore the blame at first. 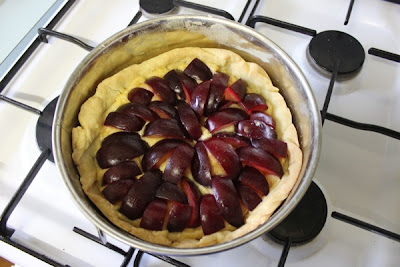 I crammed the plums into the tart.  When uncooked it looked like too many.  Yet four plums didn't seem that much.  Once the tart was cooked, the plums didn't seem excessive.  Not to me anyway.  Neither E nor Sylvia were big fans of the fruit.  E politely left some at the side of his plate as usual.  Sylvia pulled her plums out and flung them where they landed.  She did love the pink places where the plums had been. 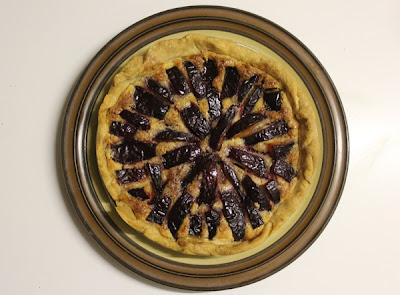 I haven't made many desserts lately.  It took me days to get around to making this one.  As I was trying to get this tart into the oven, Sylvia had one of those moments when she collapsed in a flood of tears for no good reason.  I baked it at a lower temperature than the recipe said (due to above mis-translation) so it took longer to bake.  As it came out of the oven, I checked the recipe again and couldn't believe that it was meant to be served at room temperature.  More waiting!  Finally, I had my wedge of tart on the plate and it was lovely.

At first I wasn't sure that there was enough filling but by the time we finished it, I loved it.  Yet despite E's compliments on the pastry, I am not sure I will return to this recipe as it just doesn't feel right for me.  It has made me want to try a few more pastry desserts to find one that calls my name. 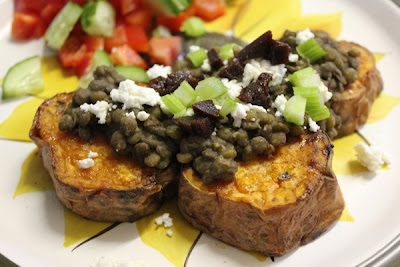 The tart is not a great tale of success in the kitchen.  So I wanted to end on a more positive note.  I made another dish last week that was inspired by Smitten Kitchen (via Eat Me Delicious).  It was a Roast Sweet Potatoes topped with pecans, goats cheese and celery.  However I used seasoned lentils (a bit like these) instead of the pecans and chopped quince paste instead of dried cranberries.  It was fantastic.  Yet I don't feel ready to give a recipe and could probably repeat it without one.  I tried it the next night with roast pumpkin but I think it worked with the sweet potato better.  Ironic, isn't it, that I leave you with a recipe for the tart that wasn't a great success but I am unable to give you a recipe for this dish that I loved.  Life's like that sometimes.

To make crust:
Preheat oven to 190 C or 375 F and grease a 22cm round springform tin (ideally a pie dish but I only had a cake tin).  Combine flour, sugar and salt in processor.  Add butter and process until the mixture resembles fine crumbs.  Add water, 1 tablespoon at a time, until mixture comes together into a ball of pastry.  Remove from the food processor and transfer to a lightly floured surface.

Roll out to about 28cm diameter and use to line the tin.  Trim any excess.  Freeze for 15 minutes and blind bake for 30ish minutes until golden (I missed the bit about freezing it and blind baked at the wrong temperature and then returned to the oven to bake until golden without the beans so it started to swell and I had to prick the pastry!  Not recommended!)  Cool slightly.

To make filling:
Mix ground almonds, sugar egg and butter until combined (I did mine in the blender).  If you wish, add a couple of teaspoons of booze such as raspberry liqueur.  I found this mixture was a lot thicker than I expected and quite small in volume.  Tip it into the baked pastry case and you will find as I did that it is sufficient.  Arrange plum slices in the almond filling.

To bake:
Bake pie for about 50 minutes or until plums are tender and filling is golden brown. Warm a little booze and jam and brush over pie.  Cool to room temperature.  Serve with cream if desired.  Keeps a couple of days.

On the stereo:
At the Crescendo: Arthur Lyman
Posted by Johanna GGG at 22:52