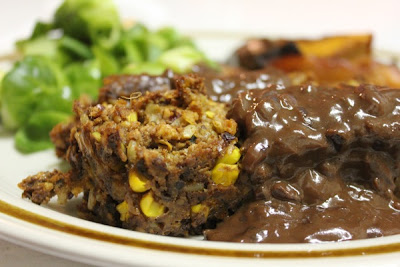 Yes you read the title correctly!  Chocolate for dinner!  Chocolate in a savoury nut roast.  Chocolate in a gravy!  You see, recently I have been giving some thought to combining Chocolate and Cheese.  Blame Choclette and her We Should Cocoa challenge!  I shunned the idea of a regular chocolate cheesecake and let my mind spin with some whacky whimsy.  Finally I made an interesting Mexican-style chocolate nut roast with a chocolate and red wine gravy.  It was a crazy idea but it worked. 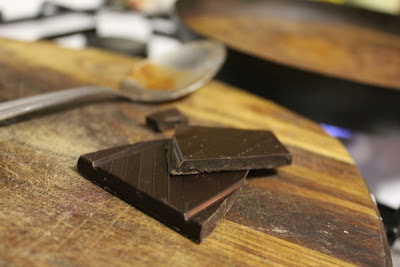 It took some time to arrive at the nut roast, even though I had originally considered it for February's We Should Cocoa Challenge.  I had put white chocolate in a salad for the savoury chocolate challenge.  At first I thought I would bake a chocolate muffins with goats cheese and plum but the plums died and the moment passed.  We had enough cake about.  I turned to savoury ideas.  I considered a chocolate lentil spag bol or a chocolate lentil cobbler with cheese dumplings or even a quesadilla with tofu, chocolate sauce and cheese (like these).

In fact when I searched for chocolate and cheese recipes online, I found some inspiring recipes: 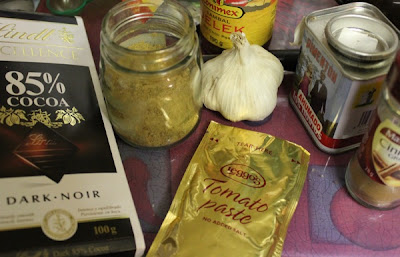 I might have made one of these recipes had I the time to go grocery shopping.  Instead at the eleventh hour,  I found myself with leftover haggis, cooked rice and a bag of ground almonds.  Nut roast seemed the easy option.  And it had to be Mexican.

You see, combining chocolate and cheese in a savoury recipe is quite a challenge.  Cheese is yellow, bright and cheerful.  Chocolate is dark, brooding and melancholy.  Both are strong flavours.  They find it hard to get along without one dominating.  Yet they work well as opposing forces to provide contrast in a meal.  The Mexicans seem to have worked this out with their moles and chilli non carnes topped with cheese.  They did discover chocolate after all, so it stands to reason they know what to do with it! 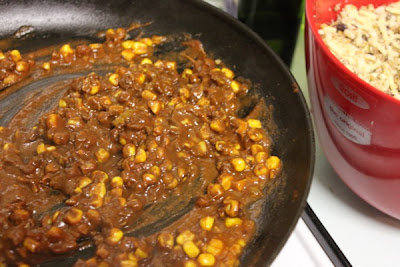 Nut roasts are easy for me. A regular comfort food.  Getting the mix of savoury flavours and chocolate right is more of a challenge. Take away the sugar and chocolate has a bitter flavour.  It can easily overwhelm a meal if not balanced carefully with other flavours.  I used this mole recipe for some inspiration.  I found it odd that the nut roast actually smelt of chocolate but the taste and texture was more cheesy.  The haggis provided a substantial - even a "meaty" - base and the corn gave some welcome sweet contrast.  The nut roast was tasty but not as spicy as I expected - next time I might add more spices. 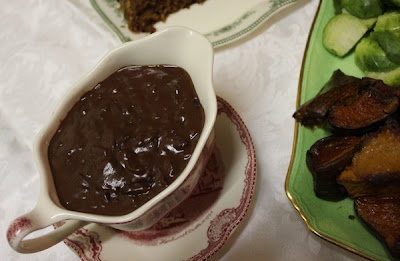 Likewise I am comfortable with making gravy from scratch but not with adding chocolate.  I stumbled upon the idea of adding red wine which seemed just right.  A wine reduction meant I needed very little flour to thicken it and the gravy had a robust flavour to complement the chocolate.  It was a very rich gravy but I loved how it looked like melted chocolate.  It tasted so good that I was tempted to just stand at the stove and eat it by the spoonful before I even served dinner!

I served the nut roast and gravy with roasted pumpkin and steamed brussels sprouts.  It was a great combination.  The sweetness of the pumpkin was delicious with the intense chocolate flavours.  E seemed to enjoy it but later told me it was too intense and chocolatey.  I guessed that this might be because he didn't have as many vegetables on his plate. 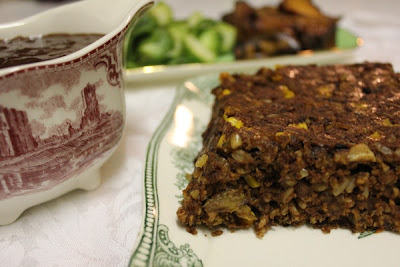 Lastly a note about making this dinner.  It was done while I tried to get Sylvia to eat her dinner, so there were frequent distractions and I probably took longer than needed.  It wasn't helped by the oven going off when I started cooking the nut roast so my cooking time is probably not quite reliable (especially as my oven isn't terribly powerful).  Finally, I have finished writing up this post on a rainy ANZAC Day with Sylvia jumping all over me - she tells me I am a trampoline.  However I can forgive a little girl who not only demands I buy her brussels sprouts but asks for more when she finishes those I have served her!

Would I do chocolate nut roast for dinner again?  Yes.  As an everyday meal?  Probably not.  I think this would be great as a celebration dish because it is so rich.  It would work well as a dinner party dish because it would surprise and be a talking point.

Heat oil in a large frypan and fry celery over medium heat for about 10 minutes or until celery is soft.  Add corn and fry another 5 to 10 minutes, depending on how many distractions you have!  Stir in garlic for about a minutes and then stir in cumin, smoked paprika and cinnamon for another minute or until fragrant.

Gently stir in chilli paste, tomato paste and water.  The mixture should be quite spicy because it loses some of the bite once you add the other ingredients.  Turn off the heat and stir in chocolate until it is melted.  Transfer corn mixture to a mixing bowl and mix in the remaining ingredients.

Spoon into a lined and greased loaf tin (I used a silicone one so I didn't grease or line) and smooth down with the back of a spoon.  Bake at 180 C for between 40 - 60 minutes until dried and slightly browned on top.

Cook the onion in melted butter on a frypan for about 20 to 30 minutes over low to medium heat until the onion is soft and wilted with some charred edges.  Scatter the flour, smoked paprika and cinnamon over the onions and cook for a minute or two until it is quite dry and brown.

Add red wine, water, Worcestershire sauce, stock powder, salt and honey.  Check taste and adjust flavours as necessary (remember you will add some bitter chocolate so it needs to be just slightly too sweet and salty).  Bring to the boil and gently simmer for about 20 minutes or until it is syrupy.

Mix in chocolate until melted.  Add a little extra water if it gets too thick.  I found I needed to do this after leaving to sit for a while before serving.  Serve hot over nut roast.

On the Stereo:
Music for Fassbinder Films: Peer Raben
Posted by Johanna GGG at 12:08