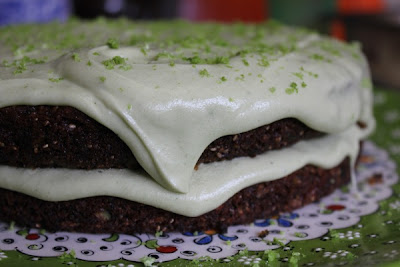 Life has been hectic lately.  So I am taking a little time in this post to reflect.  I have a Zucchini Cake that I made last month both for St Patrick's Day and my Green Potluck.  It wasn't perfect but it was close enough to be worth trying again. So here are my musings on the cake and some random thoughts. 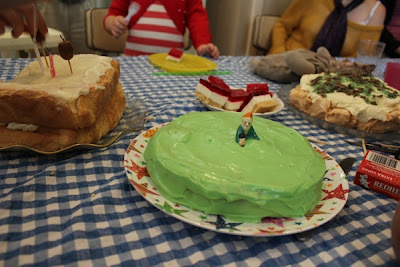 We had a birthday lunch for my brother Paul and I had green-tinted white chocolate frosting leftover from Sylvia's birthday.  To compensate for the sweetness of the white chocolate, I decided to add cocoa to this zucchini cake recipe.  It was both vegan and gluten free before I added the frosting.  It was nice but not great. 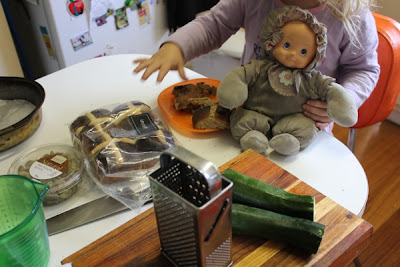 I had really chosen the cake for the potluck, which was vegan.  As I had thought we didn't have any gluten free people coming along, I decided I was not keen on the cake with Orgran GF flour.  (My mum has recently tried White Wings GF flour which she says is even better.  I just wish we could find Dove flour that Katie uses which sounds really interesting). 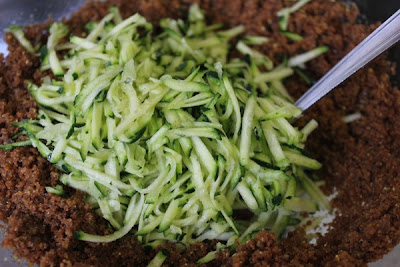 On my second attempt I altered the recipe again.  I left out the cocoa, add chia seeds, used a few more zucchini and less milk.  Both times the sugar and oil mixture was dryish but become quite wet once the zucchini was added and allowed to sit for a few minutes.  The wheat flour version needed much less milk than the GF version.  In fact, I wish I hadn't added the cautious 2 tablespoons of milk (which was less than the original 1/4 cup) to the second version because it was just too soft.

The soft cake was matched by soft icing.  I was feeling so disorganised in preparing for the potluck that I just threw in as much icing sugar as I could bear without measuring it.  I think more icing sugar would have made it firmer but probably less butter cream cheese would have been advisable as I had too much frosting.  Unfortunately being soft, meant it slouched rather than standing tall and proud.  But it tasted terrific.  Surprisingly better than when paired with cocoa.

My other failure with the frosting was when I tried to dye it green for the pot luck with some cooked and sieved spinach.  It didn't work.  Even with a few drops of food dye the icing was a very pale delicate green.  More experiments needed here.  The icing looked pretty with lime zest but I wish I had remembered to add lime zest and juice to the mix and have left it in the recipe so I remember next time. 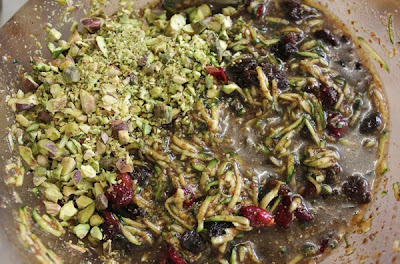 But enough of cake.  Here are a few random thoughts I wanted to jot down: 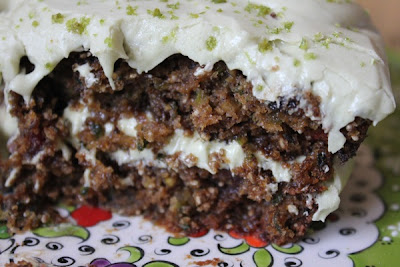 I'd like to write more but it is late and we have a busy weekend ahead.  I am sure you too have read enough so I will finish up by wishing you a good weekend.

Mix sugar and oil.  It will look rather dry.  Add linseeds, chia seeds and grated zucchini.  Set aside for a few minutes while you prepare remaining ingredients.  The zucchini will release liquids and the mixture will become quite thin.

Stir in remaining ingredients  in order of the list.  The mixture should be a batter that will fall slowly from a wooden spoon.  Add a little milk only if it needs some loosening up.

Spoon into prepared tins and bake for 35 minutes until cakes are springy and a skewer comes out clean.  Cool cakes in tins.

Make cream cheese frosting by beating cream cheese and butter with electric beaters until smooth.  Gradually add in the icing sugar and then the lime zest and juice.  You want to get a consistency that is firm but spreadable.

Turn out one cake onto a serving plate.  Spread with about half the frosting, or as much as you need.  Turn out the second cake, position on top of the frosted cake and spread with remaining frosting.  (I had some frosting leftover.)  Decorate with lime zest, nuts and fruit as desired.

On the Stereo:
Little Earthquakes: Tori Amos
Posted by Johanna GGG at 23:30