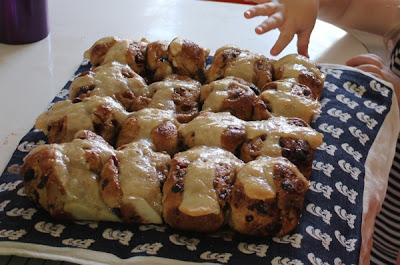 I have been making a tried and true hot cross bun recipe for a few years now.  This year I decided to give the recipe a shake-up with some wholemeal flour and chia seeds.  It seemed a bit touch and go for a while.  Fortunately I have learnt a thing or two from all the bread I have made since I first posted this recipe.  I found that kneading in some olive oil helped the texture.  Even so, I was surprised at how lovely and soft the buns were, considering how recalcitrant the dough was.  Just goes to show how practice does make dough edible if not perfect!

These buns were healthier and vegan and without peel.  (I actually love a little peel in my buns but Sylvia wont have a bit of it.  Maybe some grated orange zest next time might pass muster.)  But my crosses were still thick and sticky and chewy, just as a like them.  I tried a mix of sultanas, cranberries and dried apricots to get the colours of glace cherries (which I don't like) and peel without using a traditional dried fruit mixture.  Next time I will probably not use the apricots which were slightly too tart for the buns. 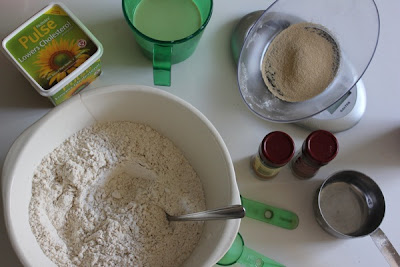 The dough rose wonderfully, despite Dan Lepard's warning that "spices have a tranquilising effect on yeast".  Apparently salt also retards the yeast's growth so maybe its absence from this recipe helped.  No doubt the yeast also loved rising on a 30 C day.  It was a relaxing day - though by no means quiet.  There was lots of jumping, riding on a kiddie bike, plates falling on the floor, little hands trying to sneak into the batch of hot cross buns and some tears!

I am sending the Hot Cross Buns to Susan at YeastSpotting, the weekly round up of yeasty recipes in the blogosphere.  I have also tried to do a little round up of some Hot Cross Bun recipes and Easter recipes.  I find it really hard to define what is an Easter recipe.  I think many in the Northern Hemisphere have spring recipes.  It is not spring here.  I usually make a nut roast for the Sunday roast dinner but most of the recipes in my Easter list are sweet - chocolate, simnel cake, and easter baking.  I hope to put a bit more thought into this in coming years.  Any suggestions are welcome.

Place milk in a jug and sprinkle yeast over it. Stand 5 minutes.  It should start to swell slightly (mine never goes frothy like the original recipe says). 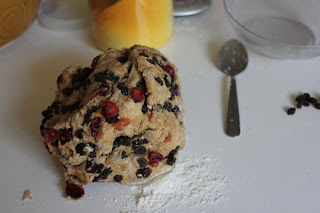 Place flour and spices in the bowl and rub in butter til mixture resembles very fine breadcrumbs. Stir in fruit and sugar. Mix in the milk mixture until the dough comes together into a ball.  You may need to help it along with a few kneads in the bowl to make it a ball.  Mine was quite craggy. 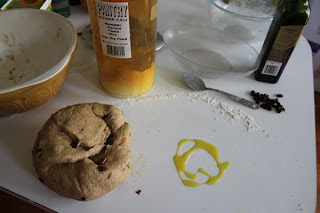 Tip onto a lightly floured surface and knead until comes together.  Then tip a little olive oil onto the table/board and knead it into the dough.  I did this a couple of times and it helped my dough soften even though it never got really soft.  Knead for about 10 minutes.  (The dried fruit kept popping out but I just pressed it back into the dough and leave behind the ones that roll onto the floor!) 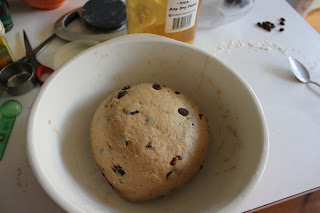 Scrape out the mixing bowl and put dough in it with a dry clean tea towel over it.  Stand in a warm place til doubled in size – this should take about 45 minutes.  Punch down the dough and let rise another 30 minutes (I don't usually do this but the wholemeal dough was sturdier so I thought I would give it a little extra). 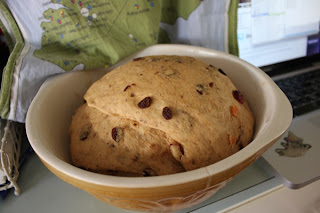 Knead a minute or two til the dough is smooth. Divide into 15 or 16 pieces and knead each bun til smooth. Arrange close together on a tray and cover with a dry teatowel. Stand in a warm place til doubled in size – this should take about 40 minutes. 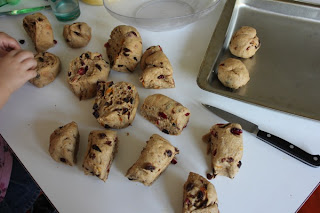 About 10-15 minutes before the buns have risen, grease a baking tray (I use a swiss roll tin), preheat the oven (220 C) and prepare the cross mixture. To make the cross mixture, mix the flour and water in a small bowl till it forms a paste.  I used a ziplock plastic bag and snipped off the corner (but make sure you have it well sealed before piping).  I think pipe (thick) lines horizontally and vertically across the tray of buns to make crosses. 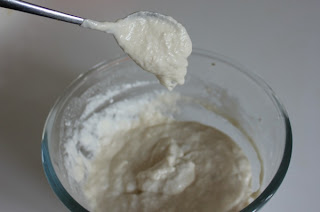 Once the crosses are piped, bake buns at 220 C for 10 minutes. Then reduce to 200 C and bake a further 10 minutes or until they  are golden brown and hollow when tapped. 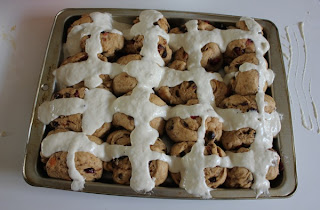 About 10 minutes before the buns are cooked, prepare the glaze. To make the glaze, place all ingredients in a small saucepan. Stir to combine and bring to the boil. Simmer for 1-2 minutes without stirring.

When the buns come out of the oven turn out onto a teatowel-covered wire rack.  (Use an old teatowel because it will get covered in glaze.)  Turning out the buns all joined together, as I like to do, is quick tricky when hot - I use a knife to loosen from the sides and shake the tray gently to loosen on bottom, then I sort of shuffle them out of the tin slowly onto the tea towel - and most of them stay together.  Generously brush glaze on to buns a few times to ensure they have a thick coating. You don't have to use all the glaze but if you keep brushing it on you will use it up and they will be very sticky. 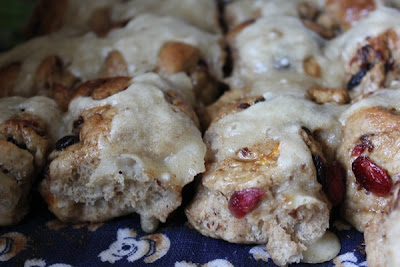 Serve hot from the oven with melted butter. To reheat, my favourite way is to place in 180 C oven for 10 minutes.  My oven isn't very powerful so you may need to check after 5 minutes - often your nose will let you know when they are warm enough.

On the Stereo:
Paradise: Arthur Lyman
Posted by Johanna GGG at 23:46