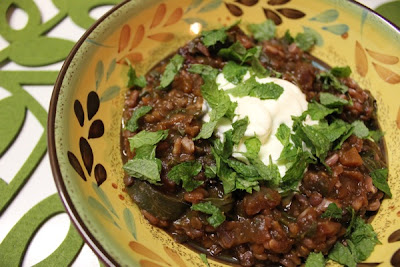 What do you do when you don't have any beetroot on hand for an Iraqi Pomegranate Stew.  Use purple carrots and Italian pasta sauce instead.  Of course!  Ok, so it was a crazy idea but it did work! Sometimes you just have to work with what you have on hand.

I made lots of other changes to Janet's recipe, quite a few inspired by Lisa, including the lentils instead of split peas.  I didn't keep a good track of my times because I was too distracted with Sylvia's dinner and bath while cooking this.  So I have given approximate times.  What you want at the end is for the rice, lentils, zucchini and pumpkin to be so soft that they are on the verge of collapse but have enough shape left to identify them. 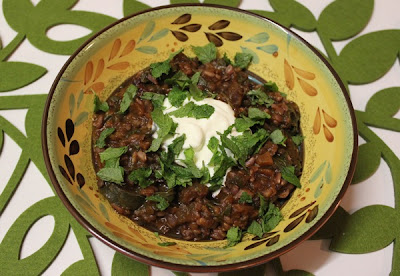 It may seem odd to name a stew after the pomegranate molasses when it is such a small part of the stew.  Yet the fruity sweetly sour flavour dominated.  It was also an excellent opportunity to use some mint from the garden, which worked wonderfully with a dollop of yoghurt on top of the stew.

My version was not at all traditional but it was delicious.  Just the thing for the onset of cold weather earlier this week.  It is hearty but also healthy.  Which is important after the excesses of Easter.  If you are looking for something different, or just an excellent way to use some purple carrots, I highly recommend this stew.

Previously on Green Gourmet Giraffe:
This time last year: NCR Tricken Rice Soup with Celeriac
This time two years ago: Sappho Bookstore Cafe - for the literati who lunch...
This time three years ago: Wholemeal Chocolate Cake
This time four years ago: The Nut Roast in History

Place tomato sauce, vegetable stock, lentils, carrots and celery in a large saucepan and bring to the boil.  Simmer for about 30 minutes until lentils are tender.  Add rice, pumpkin and zucchini and cook for about 30 minutes until vegies are soft.  Add spring onions, lime juice, pomegranate molasses, smoked salt, chilli and cinnamon.  Cook another 15 minutes.  Add spinach and leave for 5 minutes until it wilts.  Serve with a dollop of yoghurt and a scattering of mint leaves.