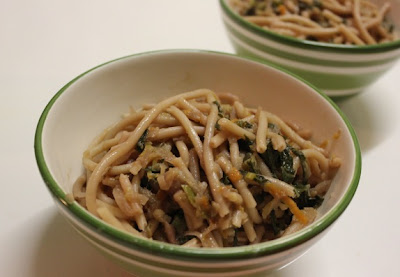 As my mum was leaving after babysitting, Sylvia said, but we didn't do any craft.  She found some toilet rolls and wanted to make binoculars of them.  We got out her paints.  Then out come the glue, the sequins and the glitter.  Sylvia did her craft on half the kitchen table and I set about cooking soup on the other half.  It wouldn't pass any health and safety regulations but there was peace in the house. 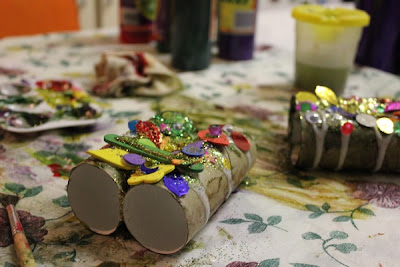 Last night I had some exciting vegetables from the Preston Farmers Market and had been unsure how to use them. Then I saw a healthy Immunity Boost Soup on Chit Chat Chomp.  My carrots were purple, white and orange, my beetroots were golden and I had parsnip and kale that was begging to be used.  I had tubular spaghetti rather than angel hair pasta. 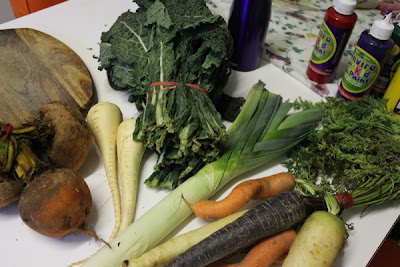 My soup was a different beast to the original recipe but rather good.  It took quite a while to peel and grate all the vegies, though some of my time was taken up with rationing out paint and supervising glitter sprinkles.  I also made a trip outside in the dark to work out which lemons on the tree were ripe enough to use. 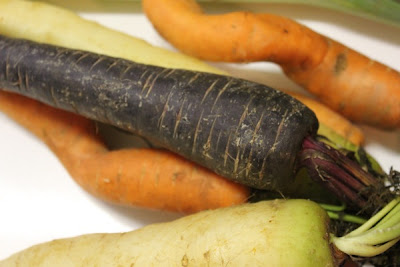 I was a little dubious about using Italian-style pasta with Asian flavours but it worked.  Next time I would even use a bit of soy sauce instead of the salt.  This is true fusion cooking with Asian flavours, European root vegetables and Italian spaghetti. [Look at the golden beetroot below!  It is my first time using this variety of beetroot and I was delighted by its vibrant colour.] I've written the recipe as I made it, with chopping the vegies as I go.  I know that kitchen wisdom is to prepare ingredients beforehand but I am rarely organised enough to cook this way. 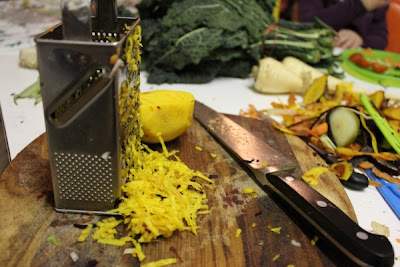 E looked at the stockpot at the end of the night.  We hadn't made much of a dent into the soup.  [Actually there was so little liquid that it was barely soup.  I've renamed it Immunity Boost Spaghetti.]  He asked if I was going to feed the whole street.  I shook my head and filled some tubs and froze them for work lunches.  Something to make me look forward to work. 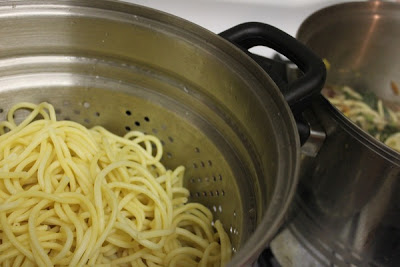 I am sending this to Ruth of Once Upon a Feast for Presto Pasta Nights #262, an event full of pasta inspiration.

Previously on Green Gourmet Giraffe:
One year ago: Cheesy pancakes and a breakfast event
Two years ago: Butterscotch layer cake
Three years ago: Surprising Beetroot Risotto
Four years ago: What does a pagan eat anyway?
Five years ago: Waiter waiter there’s a shark in my chilli non carne

Cook spaghetti (I used my pasta insert for my stockpot to cook this much) according to instructions or for 9-10 minutes.  Drain and set aside.

Meanwhile chop onion and leek, finely chop garlic.  Heat oil in a large stockpot and fry onion, leek and garlic for 5-10 minutes or until softening.  While these cook, grate carrots, beetroot and parsnips.  Add to pot and cook for about 5-10 minutes or until softening.  Add ginger and chilli paste.  Stir for about a minute.  Add water, stock powder and salt.  Bring to the boil.  Meanwhile finely slice kale.  Add to the pot as soon as it is ready.  When saucepan boil, reduce heat and simmer for about 5 minutes.

Add cooked spaghetti and stir in until it has heated through - only a few minutes.  Mix white miso into boiling water.  Add miso mix and lemons into soup and stir well.  Serve hot.

On the Stereo:
The Captain: Kasey Chambers
Posted by Johanna GGG at 09:59