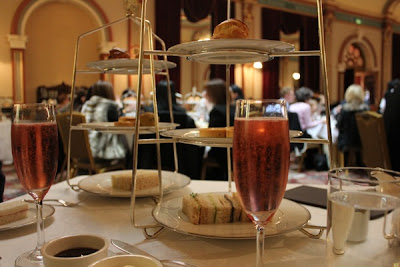 The Hotel Windsor is the grand old dame of Melbourne’s high tea scene. Built in 1883, this historic Victorian hotel has welcomed royal visitors and celebrities, been alcohol-free during the Temperance Movement, seen the drafting of Australia's Constitution, survived the threat of the wreckers ball in the 1970s, and just a few years back, found itself at the centre of political scandal about a proposed redevelopment.  More importantly, the hotel has been serving afternoon tea over this long history.  I am not sure if afternoon tea has always been such a grand occasion but these days it is fancy enough to be high tea, as E and I found when this weekend. 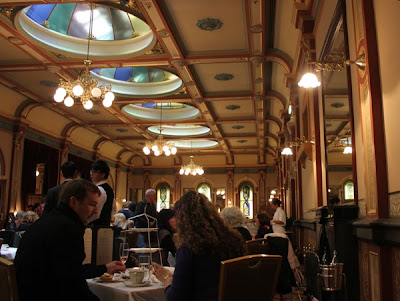 When I booked, I was given the option of eating in the restaurant or the grand ballroom. I chose the latter.  Of course.  On a previous visit with E's mother quite some years ago, we had eaten in the restaurant and though my memories of that visit are a bit vague, I am sure the ballroom was more impressive.  Velvet drapes, fireplaces, stained glass windows, domed skylights, stencilling along the dado.  It felt like we had walked into a nineteenth century drama.  A perfect place to while away a wet and cold afternoon.

As if it didn't feel posh enough, there was also a well dressed gentleman tinkling the ivories at the grand piano.  Van Morrison, Leonard Cohen and Tears for Fears reminded us that this was no costume drama but E also spotted some Scottish folk tunes in the repertoire. 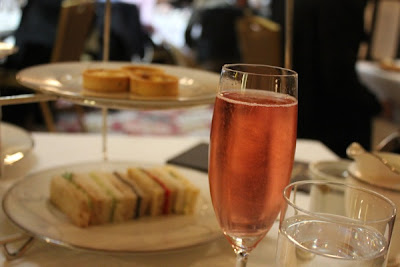 We were shown to our seat and had a short wait in which we admired the setting of the table with monogrammed chinaware, silver cutlery and the extensive menu.  By and by along came a waitress in black dress and white apron to give us a rundown of what to expect.  Yes, you need instructions for this high tea!

Firstly we were poured a glass of pink champagne and brought a three tiered silver stand with a crest at the top.  This is the time to boost the savoury levels before an onslaught of sugar but at the same time, show enough restraint so there is plenty of room for the dessert buffet.  It was also at this point that I was gratitude for being asked about dietary requirements when booking.  E being a carnivore, was given a separate stand from me so there was no danger of me accidentally eating a meat pie.

My bottom layer row of dainty crustless vegetarian "ribbon sandwiches" was more varied than the menu suggested.  Tomato and lettuce, cucumber and cream cheese, eggplant, tomato and lettuce, and egg.  Not that exciting but nice and the eggplant was well cooked.  The warm cheese and onion tarts on the second layer were nice, though the buttery pastry was more memorable than the filling. 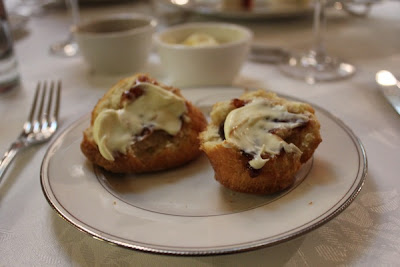 Unfortunately the scones on the top layer had to wait until I had sampled the first two layers and their warmth had waned by the time I reached them.  They were good but not great.  Fluffy but a bit dry around the edges.  The jam was no better than a cheap jar off the supermarket shelf.  However I enjoyed the scones because they were eaten in such charming surroundings.  And they were accompanied by a pleasant cup of tea. 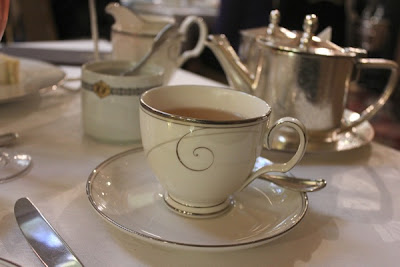 Our experience of tea, like much of the afternoon was patchy.  The tea menu is long.  Overwhelmingly so.  The waiter wasn't very helpful in identifying herbal teas for me.  I ordered Cleopatra's tears - a pleasing blend of chamomile, rose petals and lavender.  I loved how I was given two elegant silver teapots.  One was filled with loose leaf tea steeping and one was just hot water.  E ordered the Windsor blend and was just poured one cup of tea from a large teapot. 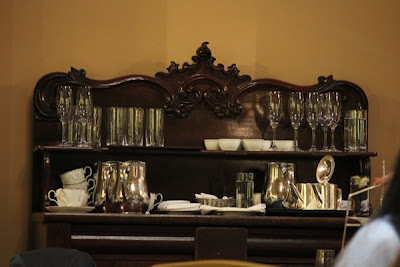 E would have preferred his own teapot.  At least that would have meant he could have had another cup of tea when he wanted it.  Unfortunately, this was typical of the service.  The waiting staff were polite  and did their job but they lacked warmth and attention to detail.  Great service makes you feel like you have what you want even before you know it.  Whereas the waiters we encountered seemed more like students earning some pocket money. 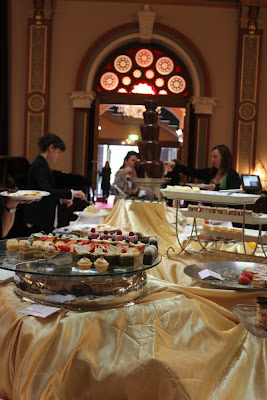 The tiered stands were fancy but the main event was the satin draped table that heaved under the weight of the dessert buffet.  I had been eyeing off the chocolate fountain from afar but when I got there, plate in hand, I was lured away by a tray of delicate wee cakes and slices.  I chose the raspberry lamington and chocolate caramel cake, while E loved the jelly slice.  It was a great plate to get in the right headspace - survival here was taking small samples of many desserts. 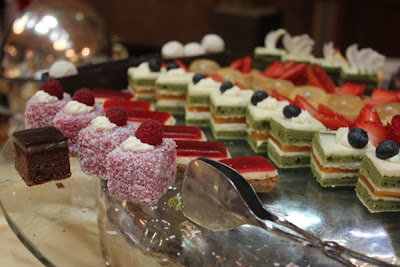 I then was overwhelmed by all the desserts.  Lots of tarts cut into elegantly thin slices and plates of creamy fluffy puddings.  Most desserts had name cards.  Many were unfamiliar to me.  Yet I felt quite comforted by those that I knew such as pavlova, cheesecake and bread and butter pudding.

I arrived back at our table with a plate full of raspberry lamington, bread and butter pudding, strawberry tart, bitter chocolate tart, cheesecake, chocolate dipped strawberries and fruit salad.  The chocolate tart was amazing.  It has to be one of the richest desserts I have ever had and yet I was compelled to finish it.  I didn't finish all the desserts because not all were so appealing.  A spoonful was enough for some.  After all, there were so many more to taste. 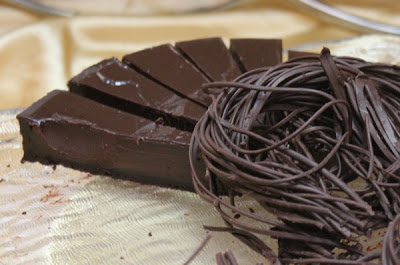 I did return for a slice of wonderful apricot frangipani tart, chocolate caramel cake and more chocolate dipped strawberries.  I've never had the chance to eat from a chocolate fountain before and I was quite fascinated at watching my strawberries splashing about under a waterfall of melted chocolate.  I would have liked to have sampled something from the pancake station and try some other desserts but by then I was well and truly full as a state school. 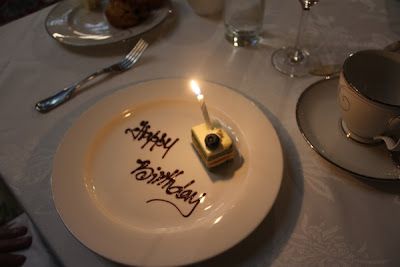 When we first came in and "met" our waiter, we were asked if we were celebrating any special occasion.  After we had our fill of the dessert buffet, E was brought a small cake with a lit candle and 'happy birthday' was written in chocolate on the plate.  It was a really nice touch.  It was a thoughtful and subtle gesture that made E feel special.  Then we went home to where Sylvia was waiting for us off the train with my parents who had been babysitting her.  A great end to a great experience. 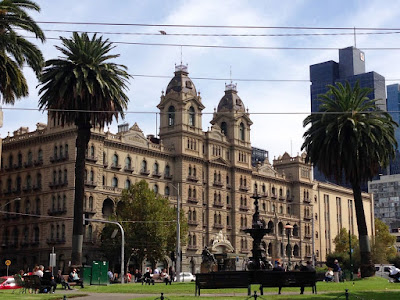 At $79 a head, this is an afternoon tea of great expectations.  Was it worth it?  Yes, but with reservations.  This is an affordable special occasion and a great opportunity to experience an historic building filled with old world charm.  Some food was fantastic, some was ordinary, an effort was made for me as a vegetarian and for E's birthday but the service overall was lukewarm.  I recommend it in Melbourne's cooler months when you want to hole up inside and eat lots of comforting food.  My advice: book ahead, confirm your booking, don't eat lunch and don't expect to be able to try every dessert!