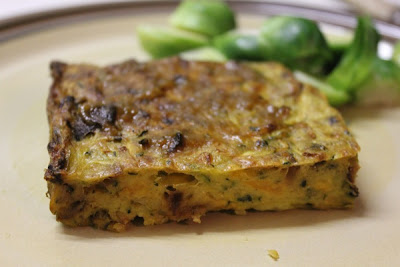 Today I vacuumed.  Right beside me helping out was Sylvia in her sparkly spectacles, like a young Edna Everage.  She wants to be part of things I do.  When it comes to vacuuming, I want to tell her to save her energy for when she is older.  I hated vacuuming as a child.  Even when it earned me pocket money.  Possibly I might have enjoyed it more if our place had been as small as ours is now - I can vacuum our home from one powerpoint with no extension cord.  But enough about horrid household chores.  Today I want to dwell on a more pleasant childhood memory.  Zucchini Slice! 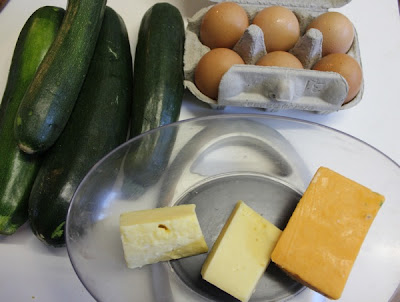 Zucchini slice seems as much part of my childhood as roast dinners and chocolate puddings.  It is cheap and quick.  I think my mum would whip it up on a weekend.  In my memory it is a casual meal to eat in front of the telly rather than a proper sit down at the table meal.  Not at all fancy.

Believing it is a common Australian recipe, I was curious to find out a bit about its history but could find little on the internet or in my cookbooks.  Stephanie Alexander in The Cook's Companion says she got it from an Italian migrant who arrived in Australia in the 1950s.  The Herald Sun had an article in 2010 noting that it was the most popular recipe on taste.com.au. 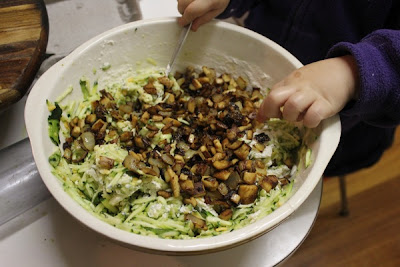 Zucchini slice is one of the first recipes I had written down in my recipe notebook that I started when I moved out of home.  Soon after writing it down, I become vegetarian and crossed out the bacon in the ingredients list.  A year or two ago I made a zucchini slice and it was lacking.  After all it is like one big crustless quiche.  More eggs than I usually like to use.  Then when I recently discovered tofu bacon I decided to try it in zucchini slice.  This was very successful.  It added lots of flavour and texture.  No doubt, the marinade and nice cheeses from the Vic Market also helped. 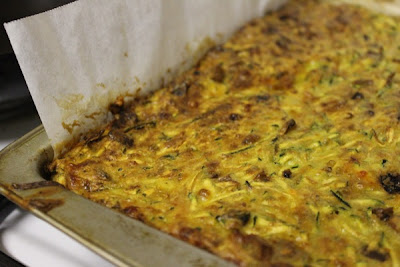 E and I swooned over the slice.  It was so good I could have eaten the lot on the first night.  We ate it over three nights.  I loved it warm and crispy after being reheated in the oven or soft and creamy at room temperature.  Sylvia wouldn't touch it.  She was more interested in the tofu bacon - and grating the zucchinis in the food processor.

My memory of the recipe is not razor-sharp, despite it only being a week since I made it.  Fortunately I took notes so it is pretty close to what I did.  I was a bit unsure that I was correct in saying it used 1kg of zucchini but the amount in recipes varies.  I am interested to try some variations now that I have mastered a vegetarian version of the traditional recipe.  Substituting some carrot for grated zucchini, using different cheeses or even adding sun-dried tomatoes.  Anything goes so long as it is tasty and easy. 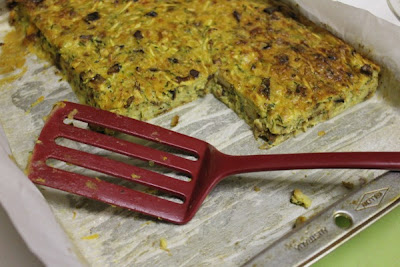 I am sending this zucchini slice to Clare of The Vegetarian Experience who is hosting Family Friendly Fridays on behalf of Ren of Fabulicious Food.

Previously on Green Gourmet Giraffe:
One year ago: St Andrews Market - crafts in the bush
Two years ago: The case of the disappearing tart
Three years ago: Heidi’s Chocolate Cake
Four years ago: Rosy Russian Bread (and Grumpy Baker)
Five years ago: TGRWT #2 - It’s nuts, it’s bananas, it’s stew!
You can read about more of my childhood food at my Food History post.

Preheat oven to 180 C (I heated my oven to 200 C because it is slow). Grease and line a lamington or swiss roll tin (I used a swiss roll tin).

Heat 1 tbsp olive oil in a largish non-stick frypan and fry the onions over a medium heat for about 5 minutes.  Add tofu bacon and fry for about another 15 minutes until facon is quite crispy.

While the facon is frying, grate zucchinis and cheese - I did this in the food processor.  Tip into a large mixing bowl and mix with remaining ingredients.  Once facon is done, add this to the bowl and mix well.

Tip into prepared tin and spread evenly.  Bake for about 35-40 minutes (I did 50 minutes) until goldn brown and crispy on top.  Best to let sit for a wee while before cutting into large slabs and serving.  Ours kept in the fridge for a couple of nights and was best when heated up in slabs at 180 C for about 15 minutes.  It would also be lovely chopped into smaller squares and served at room temperature as finger food.