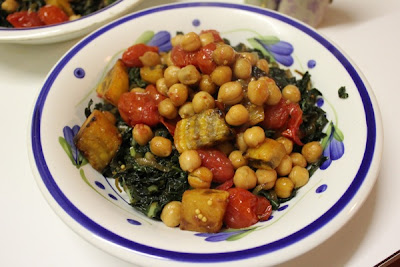 Summer suits a quick meal after work.  It is just the weather to throw vegies together in a salad or stirfry.  Winter is harder when I find myself rushing home and haven't prepared dinner.  I want to roast and simmer and bake.  So with the darker night and cooler days, dinner is more often served later.

This bowl of vegies was inspired by Wendy's Roasted Beetroot Salad, Joanne's Spicy Lentils with Sweet Potato and Kale, and Kari's Maple and Balsamic Roast Vegetables and Tofu.  Yet I didn't follow any of their recipes.  I took my vegies from the farmers market and adapted a marinade I had used before.  Don't the stripey golden beetroot look fascinating!  If I was asked to name that vegetable I would call it a Tiger Beetroot. 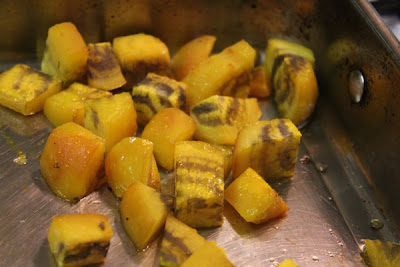 When I made this bowl of vegies a couple of weeks back, not only were the meal times a little out, but so was Sylvia's sleeping.  She had had one of those odd nights when she seemed to go down really early and then rose as we were about to go to bed and was wide awake for hours, no matter what we did.  So it was followed by a night when we were doing that delicate balancing act of trying to judge whether to give her more or less sleep.  Less sleep won out. 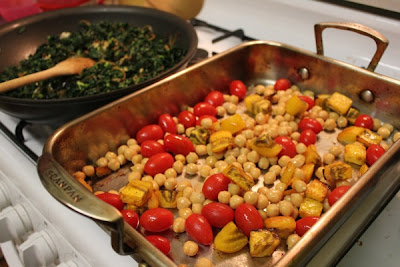 The upshot was that she was still sitting up with us when we ate dinner later than usual.  She had already picked at her own dinner.  However she decided she loved the chickpeas - not surprising given that they had the smoky sweet flavours of the tofu bacon that she loves so much.  With an eye for detail of a fussy child, she was unnerved by the mustard seeds.  I scraped off a few and then told her to just eat them.

I had thought the vegies would last a couple of nights but the three of us polished off the lot.  After dinner I made a huge batch of pea soup so that the following night we could come home and just heat up our meal rather than having a long wait.

I am sending this post to Ricki's Wellness Weekends.  Hop on over to check out lots of great ideas for healthy vegan and sugar-free dishes.

Marinade:
3 tbsp maple syrup
2 tbsp red wine vinegar
1 tbsp seeded mustard
1 tbsp tamari
1 tsp liquid smoke
dash of cayenne pepper
Simmer beetroot for 15 minutes on the stovetop in a medium saucepan and then roast in 1 tbsp olive in a hot oven for about 30-45 minutes or until soft (mine didn't get soft after 45 minutes but I blame my slow old oven).

Meanwhile, make marinade by mixing all ingredients in a small bowl.  Set aside two tablespoons of marinade and add remainder to kale and cook a few minutes.  The marinade should still be in pools at the bottom of the frypan when you turn off the heat and will create a lovely sauce.

When beetroot is just soft but not too crisp, add chickpeas and tomatoes and a couple of tbsp of marinade with a pinch of salt and roast another 10 - 15 minutes.

Pile kale in a bowl and spoon beetroot, chickpeas and tomatoes over the top.

On the Stereo:
Snowflakes are Dancing - Tomita
Posted by Johanna GGG at 19:18