Django Django and some Fitzroy musings 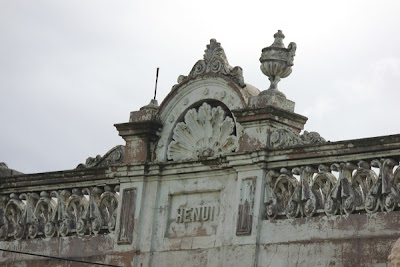 I am rather fond of Fitzroy. So when E announced he was going to play with his ukelele group at the Fitzroy Market after he did the child care nursery bee, I decided that Sylvia and I would get there by public transport.  I am sorry I took no photos of the lovely rows of terrace houses and autumn leaves.  Instead I can show you this delightful parapet that reflects the shabby chic of Fitzroy. 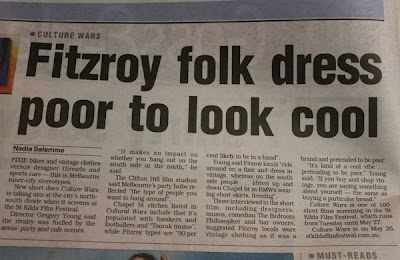 E is less starry eyed than I - having discovered it at a more cynical age.  He was most amused by this headline in one of the freebie newspapers yesterday.  The article claims that dressing in vintage clothing makes people look poor but I disagree.  And if you wanted to find some such retro clothing, you would certainly find it at the Fitzroy Market. 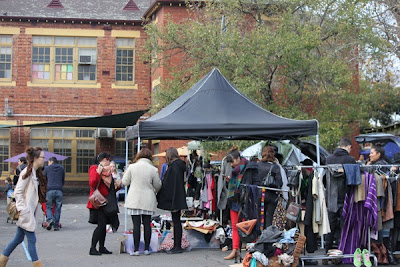 I am rather fond of a market that includes vegie sausages in the sausage sizzle.  It doesn't often happen that Sylvia and I can have a sausage and tomato sauce wrapped in a slice of bread.  We then had a lovely time browsing the stalls.  I bought apricot chutney and an old book.  Sylvia got adoll, a $2 pair of sunglasses and a funky necklace that was broken within the hour. 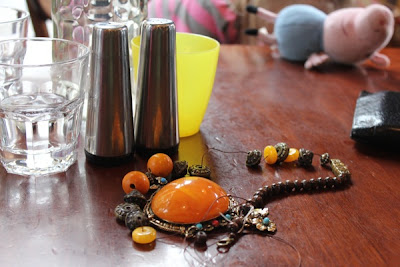 I was keen to find a place to eat on Brunswick Street after the market.  When I plan where to go, we usually do quite well but when we wonder the streets, E and I have trouble agreeing on a place.  I wanted somewhere a little different with fantastic food and E just wants cheap and cheerful.  I would have loved to have eaten at Babka Bakery Cafe but like so many nice places on Brunny St, there weren't many free seats and even less space to fit a stroller.  (In fact, they have a sign forbidding prams!)  So we bought some bread and went next door to Django Django. 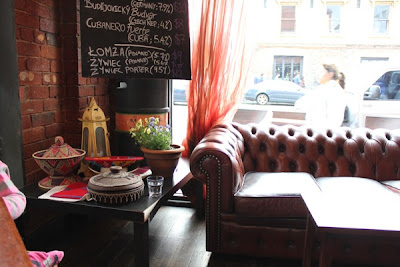 Django Django had a fairly standard Brunswick Street menu of eggs, pancake, big brekkie, salad, pasta, without being outstanding.  Sylvia just wanted chippies.  I wanted something sweet and chose a pancake with berries and marscapone.  E chose the curry. 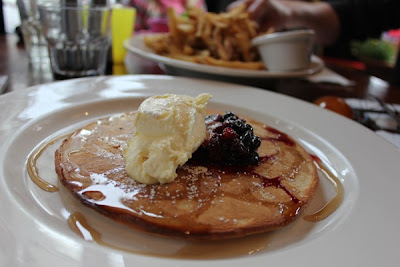 You may notice that there are only two dishes in this photo!  It seems E's order got overlooked.  After arriving at the market too late for a sausage (due to a scenic tour of Fitzroy's lanes and one way streets as he drove there) he was quite grumpy.  Fortunately Sylvia's bowl of chips was huge and the chips were really good - crisp and well seasoned with salt and pepper.  They came with gravy and aioli.  I am not keen on marscapone and my pancake was just a little crisp but, these quibbles aside, I really enjoyed it. 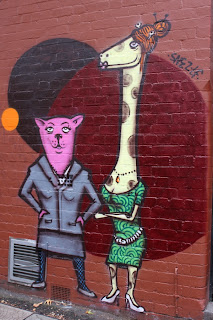 Would I go back?  Yes.  Would it be my first choice on Brunswick St?  Certainly not.  The food was nice and the ambience pleasant.  Less impressive was the service.  If I stumbled across this place in the suburbs, I would be quite pleased but standards are high in Fitzroy.  And lastly I leave you with a green clad giraffe that adorned the wall of Django Django.  Now who doesn't love a suburb with such colourful walls!