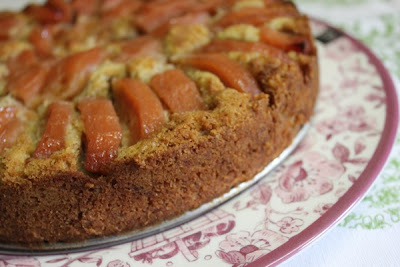 When I found quinces at a recent visit to the Collingwood Farmers Market, I bought a bag of them with trepidation.  I have already written of my nostalgia for quinces.  Having cooked with them before, I am also well aware that they are not the easiest of fruit.  I searched quince recipes for ideas and finally settled on Anh's quince and almond cake.  It was so good that I am really sad at how infrequently I encounter quinces

I didn't quite follow the recipe and it reprimanded me soundly.  Anh simmered her quinces for 4 hours.  I followed the recipe that the nice man at the farmers market gave me and simmered mine for 30 minutes.  I had intended to bake mine.  Then it was all too much.  Sunday was a day when I was lacking on energy.  Poaching the quinces on the stovetop seemed so much easier. 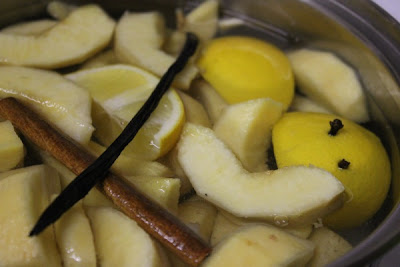 It seemed fitting that I began preparing the quinces while E and Sylvia ate crumpets and watched royal documentary, The Diamond Queen and we ate the last piece with a cup of tea while watching Downton Abbey.  This is a cake that would be at home at high tea time in a grand house among bone china and corsetted matrons.  In fact I would go as far as to say it is one of the more impressive cakes on my blog.

Impressive often means fiddly.  I started this on the Sunday night when I trimmed, peeled, chopped and poached the quinces.  I liked Anh's suggestion of adding the quince skins in a muslin bag to the poaching water for extra flavour but I had a huge pile of trimmings and just didn't have it in me to be so organised. 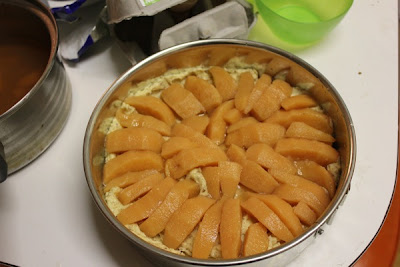 I made the cake on the Monday night in stages between hunting for Dolly (who was hiding in a shoebox), telling Sylvia a story (about a little girl called Sylvia who stays up all night and is ready to sleep when it time to get up) and carrying Sylvia back to bed when she appeared in the kitchen.  I almost felt mean to arrange the remains of the quince slices on the cake.  I had fed a few to Sylvia who just loved them.

I was glad that I started the cake as early as possible.  After the first 50 minutes at 165 C oven, my cake looked like uncooked batter peeking through the moist quince slices.  I put it back in to cook further at 180 C for 35 minutes and let it cool in the oven with the door ajar.  It smelt wonderful but it was too late to sample a slice. 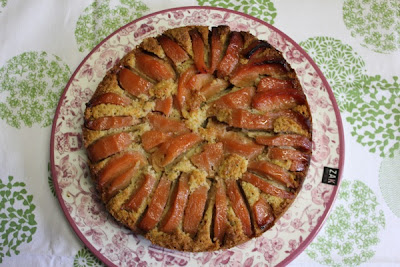 The next morning  I discovered a large slick of melted butter on the bottom of the oven.  Even so, I really really wanted a piece for breakfast.  Instead I exercised amazing self control and took the cake to work where we had a morning tea.  The feedback was most complimentary.  Such praise was all the more welcome for overshadowing the hassle of finding that my car wouldn't start and needed a new battery.  I took the leftover cake to a meeting that afternoon and jealously guarded the last wedge to take home to where my mum was looking after Sylvia.  E and I shared the last small piece last night.

The cake was an astounding success.  It wasn't the same glorious yellow and deep red of Anh's cake.  Yet it had a marvellous soft crumb that was barely sweet.  Quite rightly the cake allowed the fragrant and subtly spiced quinces to shine. I was pleased and relieved, given that it didn't go according to plan.  It was only after finishing the cake that it twigged that I added 300g of butter rather than 185g.  No wonder it tasted so good!  But it is a reminder as to why I shouldn't bake while getting Sylvia to bed. 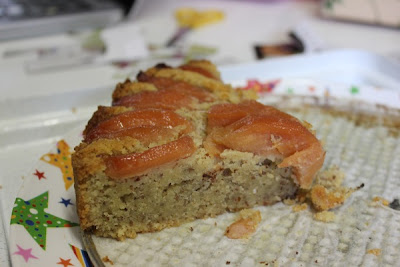 Even without the extra butter, I am convinced this is the best quince cake I have come across.  Browsing for other quince ideas couldn't turn up any cake recipe that was more tempting.  Though I am still interested to try the quince and gorgonzola salad posted by Cindy recently.

I am sending this cake to Jacqueline of Tinned Tomatoes for her Bookmarked Recipes event (originally founded by Ruth from Ruth's Kitchen Experiments).

Preheat oven to 165 C.  Grease and line a 22cm springform cake tin.  Beat butter and sugar until creamy.  Add eggs one at a time.  Gently stir in almond meal, flour and vanilla.  Spoon into prepared tin and smooth with the back of a spoon.  Arrange quince slices on the top of the cake.  You may not have room for quite all of the slices.  Bake for 50 minutes or until cake is golden brown and set.  (The cake will poke through between the quince slices once set - as in notes above, I baked mine much longer but I think this is due to accidentally putting in too much butter.)  Cool in the tin.  Remove the side of the springform tin and serve in wedges.

Trim and peel quinces.  Quarter and remove cores.  Slice each quarter into 3 or 4 slices.  Pile into medium saucepan and add remaining ingredients (I pushed the cloves into a lemon quarter so they were easy to remove.  Bring to the boil and simmer for about 30 minutes or until quinces are soft.  Discard cinnamon quill, lemon quarters, and cloves.  Set aside vanilla bean.  Cool quinces in poaching liquid.  I left mine in the saucepan overnight.  Serve in poaching liquid or strain quince slices for above cake and save liquid for smoothies, crumbles or just to drink straight.

On the stereo:
Auf Leisen Sohlen - Roedelius
Posted by Johanna GGG at 23:23