Lilies on Brougham and a visit to Monsalvat 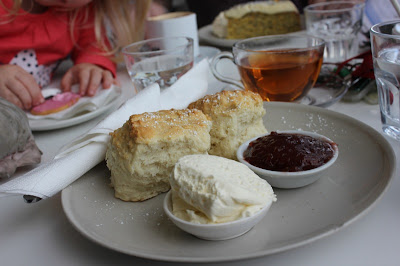 We usually go to Eltham to visit Monsalvat. That is exactly what we did last weekend.  It is one of my favourite places in Melbourne.  However, the Monsalvat cafe was busy with functions.  We had to look elsewhere for afternoon tea.  I am pleased to report that Lilies on Brougham delivered the goods.  But before telling you about this sweet nursery -- giftshop -- tearooms, I will indulge in some photos of Monsalvat. 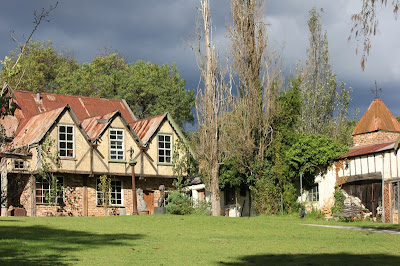 We drove there after visiting the Preston Farmers Market.  The weather was mostly sunny.  Perfect for a walk around the grounds to admire the rustic buildings of the artists colony.  At one stage grey clouds gathered in the sky but as you can see above, the sun refused to stop shining and the clouds went away in defeat. 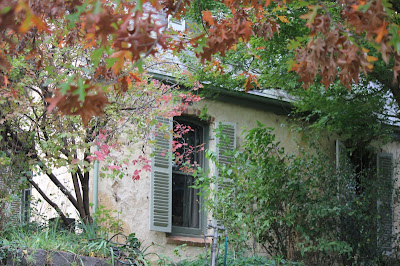 Despite the sunshine, it was clearly well into Autumn.  Trees sported reds, russets, browns and a kookaburra.  Yes a kookaburra flitting between trees, stopping on a branch to eyeball us and then flying off on his way with a laugh.  We also saw the peacocks that I have photographed on previous visits.  The peacock sitting calmly in the grass had a tail that looked too ragged to display in a fan, but E thought maybe it was the time of year. 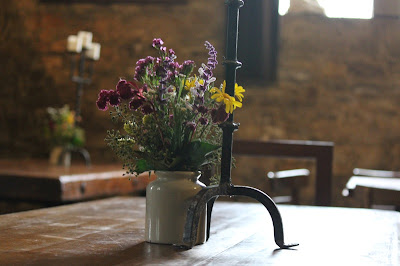 In the dining room of the Great Hall, flowers and candles adorned the tables and cutlery was being laid for a wedding feast.  We explored the passageways to other rooms, looking out arched leadlight windows and walking through stone doorways so low that E had to stoop to avoid hitting his head.  We spied carved bosses jutting out from the ceilings, were charmed by gothic candelabras, and noticed an Aga as we passed a kitchen.  It is the sort of place where I wanted to just keep clicking away with my camera everywhere I looked. 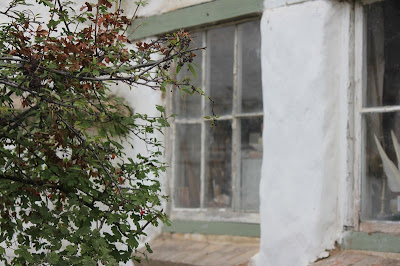 After some time, E was hungry for coffee and cake.  Fortunately we spoke to a friendly caterer who recommended either The Lane or Lilies on Brougham.  It was just the sort of local knowledge I was after.  We chose the later and were very pleased with the recommendation.  Lilies on Brougham is a nursery, a giftshop and a tearoom.  Hence we sat in a section that overlooked the nursery with a rustic old mudbrick house with roses growing up the chimney in its midst. 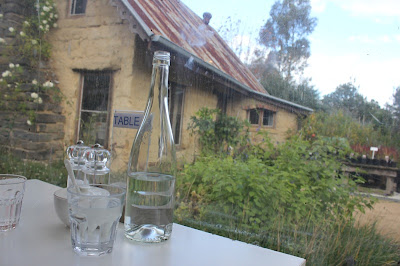 As soon as I looked at the cake display, I knew what Sylvia would have.  On the counter was a jar of pink pig biscuits with marshmallow snouts.  Given that she and Dolly hang out a lot with George Pig  and that she loves pink icing and marshmallows, it wasn't hard to predict it would go down well.

I chose scones for myself (see top photo).  The scones were nicely warmed but could have been lighter and possibly would have been if fresh from the oven.  However this was forgiven because the rhubarb and strawberry jam was so good that we bought a jar of it to take home with us. 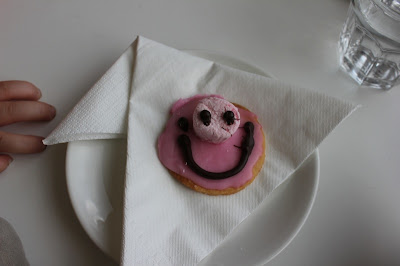 E had a gluten free poppyseed and orange cake with a fluffy cream cheese frosting.  It was absolutely delicious.  He was very pleased with his choice.  I had to have a few spoonfuls to check that he was correct in declaring it delicious.  It was not too heavy for E but dense enough for me.

They also do lunches but as they had finished serving lunch by the time I arrived, I didn't peruse that menu, but I think it was just what was on the blackboard.  Must go back another time to check this out. 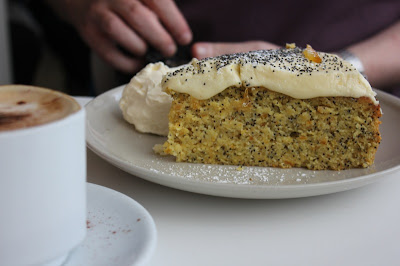 After afternoon tea, we wondered around the gift shop and garden.  I restrained myself from buying nice things in the gift shop which was very Pru and Tru (for those who watch Kath and Kim) in the nicest possible way.  Sylvia was fascinated by the crabapple trees in the nursery.  I was wary of the Black Pearl Chillis that looked a little malevolent (but I feel that way about many chillis).  Then it was time to go home, very satisfied with our day.