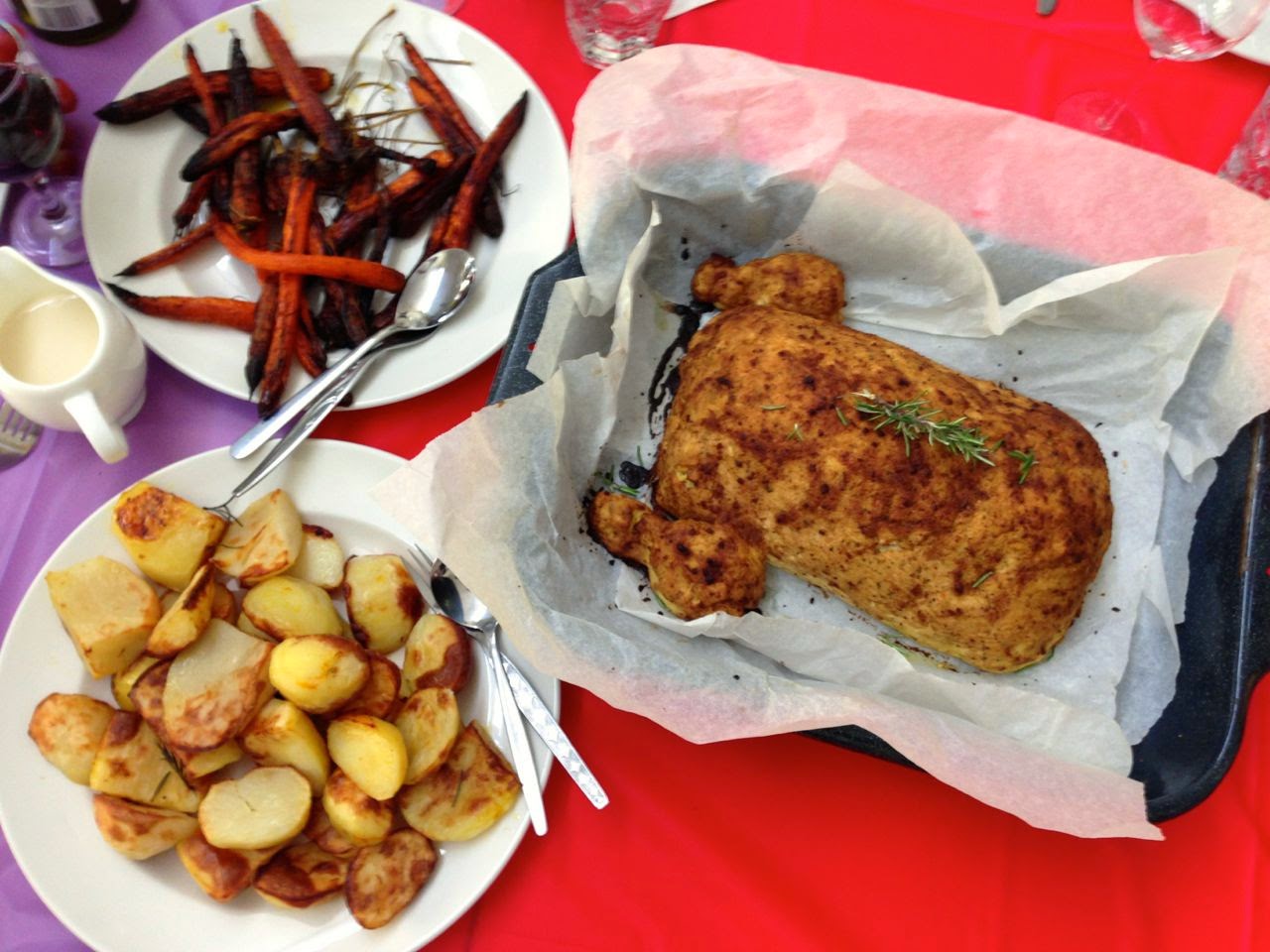 It almost looks real doesn't it!  We called her Tina Turkey but she was really a tofurky.  She was the star of the Green Renters Vegan Roast Masterclass run by Cate today.  I love making vegetarian roasts and went along to learn some new roast ideas and share some hearty food over the winter solstice weekend.  My photos are not great.  I was too busy chatting to others and enjoying good food to concentrate on photos. 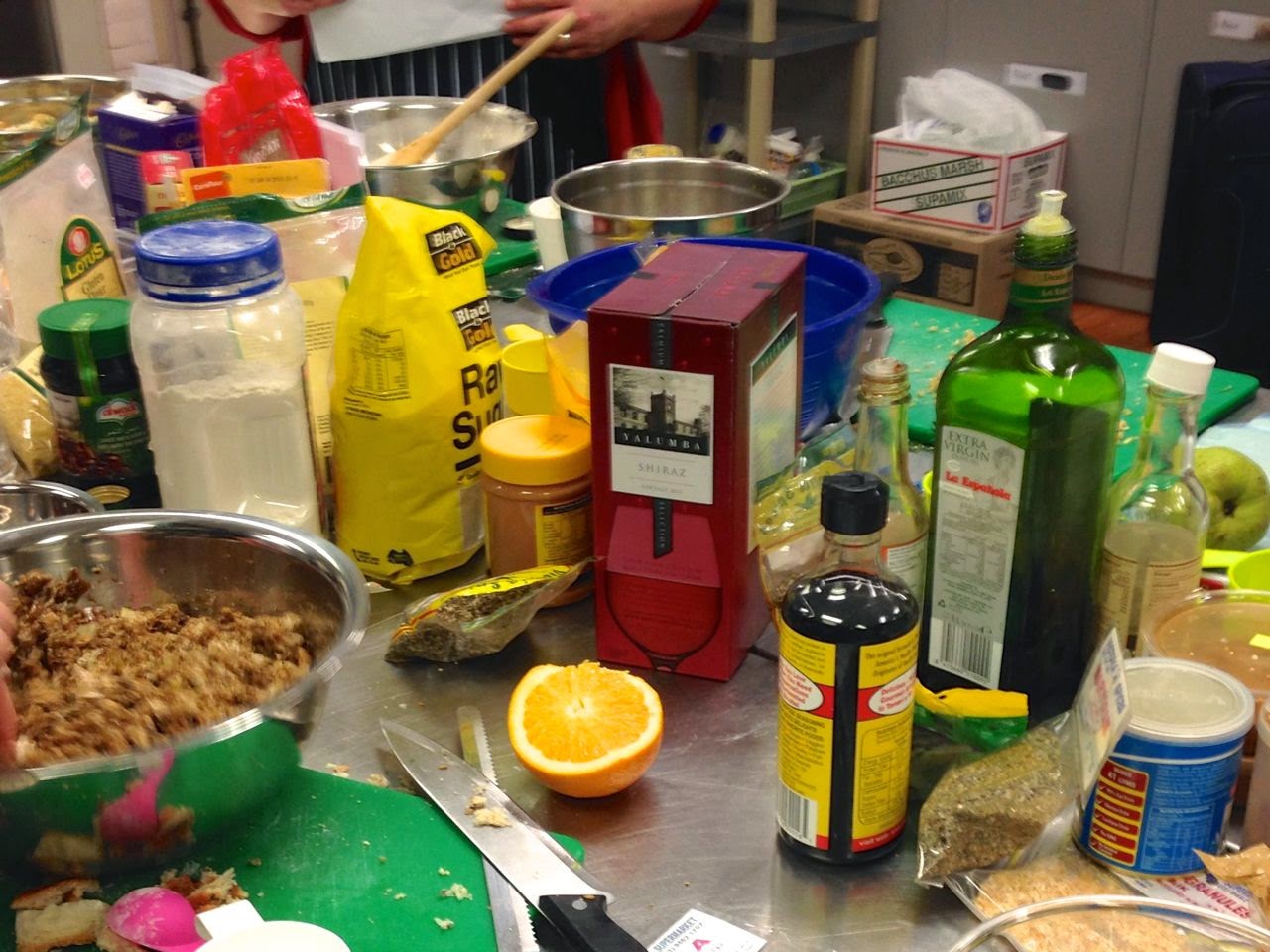 When I told Sylvia that I was doing a cooking class, she said that I already knew how to cook.  And I do.  But I have found that cooking with others is always a good way to learn more.  We started with a quick introduction to the recipes by Cate and a chance for everyone to introduce themselves.  Then we ventured into the large kitchen with a bench full of ingredients.  It was quite overwhelming to work with a dozen or so people in a strange kitchen but we danced around each other gracefully - mostly! 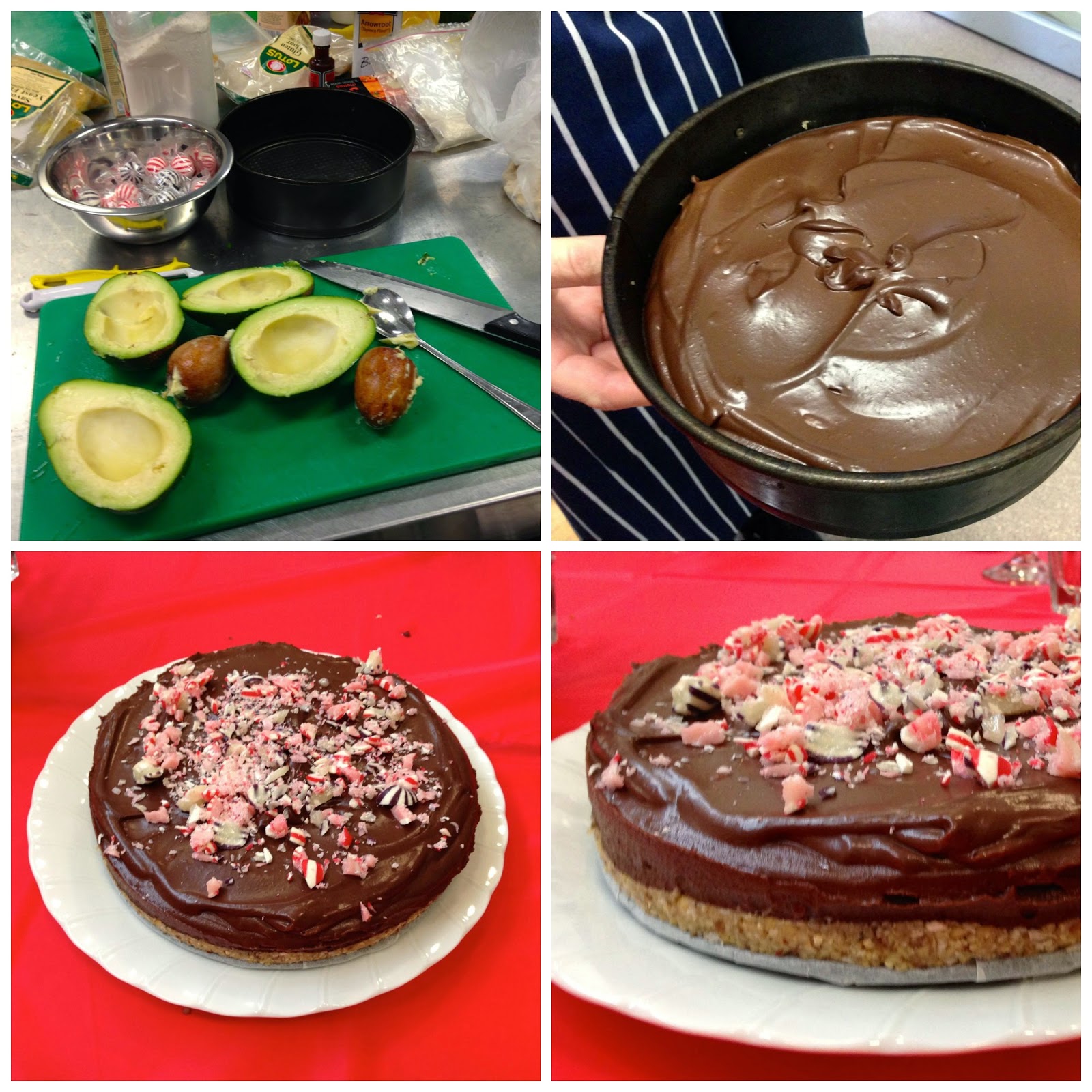 Recipes were allocated to small groups.  The first lot were desserts that needed to set in the fridge.  We made a no-bake chocolate pepppermint tart, a lemon tart, tiramisu and three ice creams.  Of course I chose to be on the chocolate team.  The tart had a nut, date and coconut base and a chocolate avocado filling.  It was joy to see the thick creamy filling in the blender. 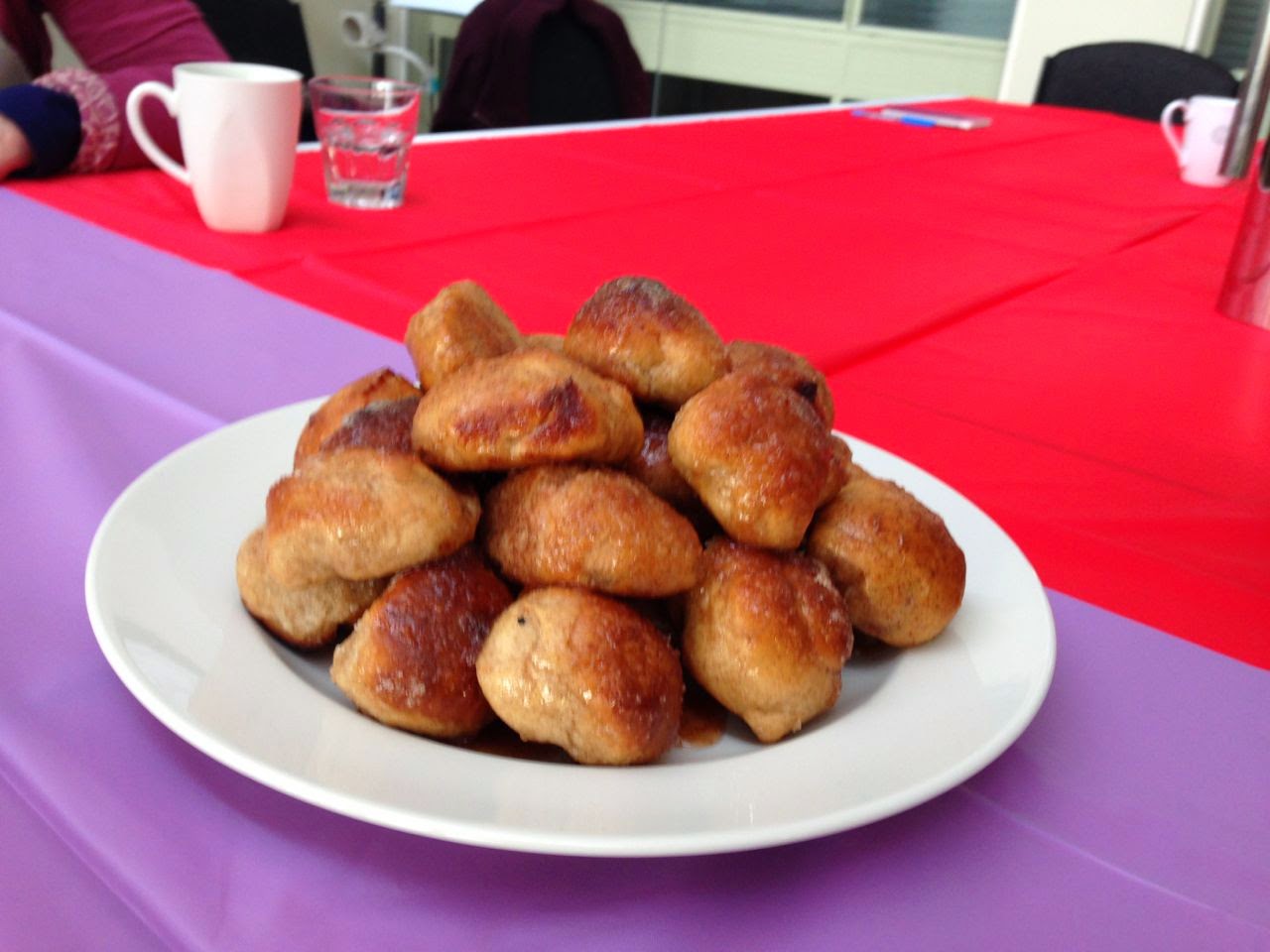 Once the desserts were chilling, we chilled too with a cuppa, a slice of sticky baklava and warm doughnuts.  Did I mention that one of my "classmates" was another blogger, Veganopoulous!  It was great to meet her.  She was as warm and friendly and funny as her blog. 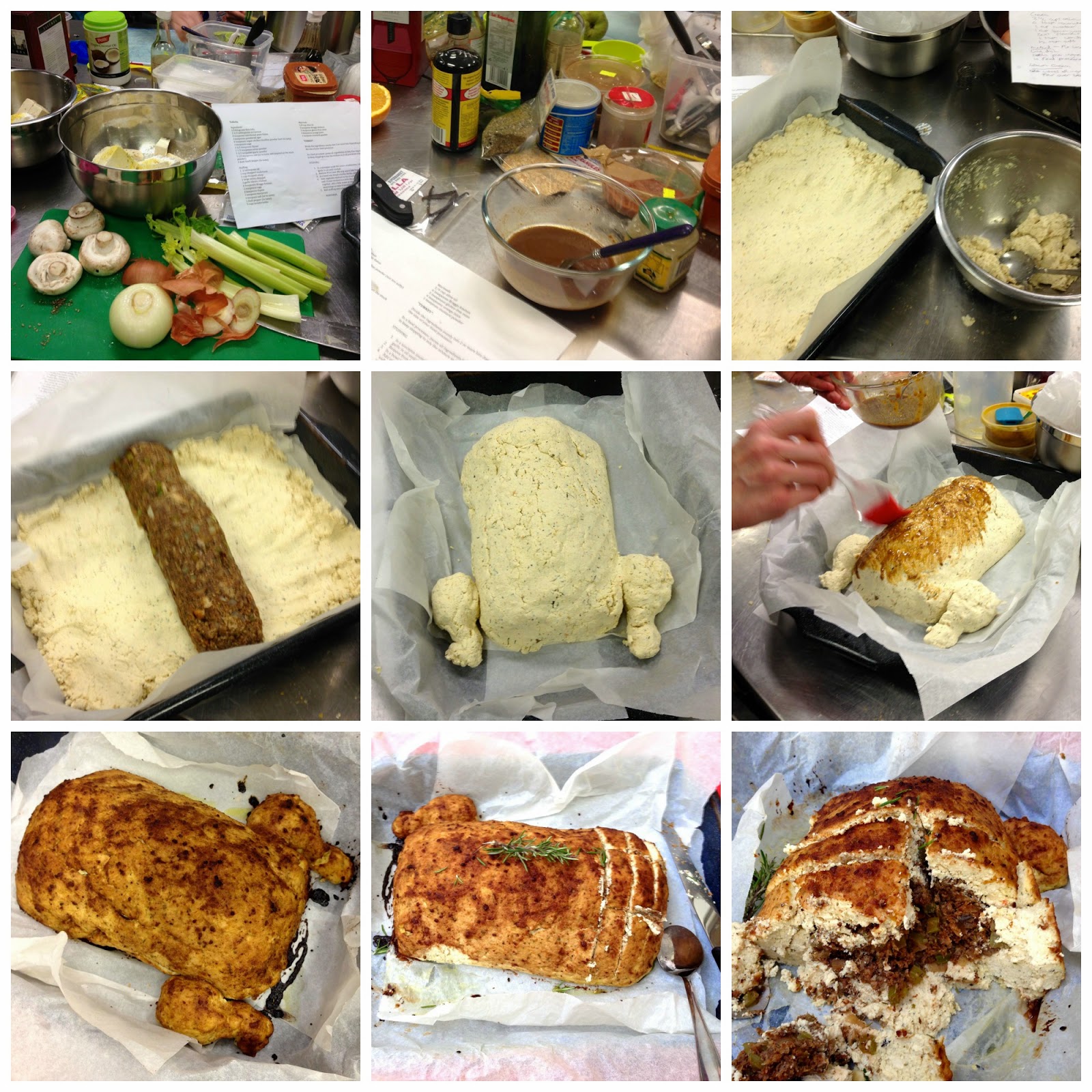 Next was the roasts.  Any regular readers will know that I love nut roasts.  However I wanted to make something I hadn't made before.  Like tofurky.  I teamed up with Veganopoulous and Leanne.  It was fairly easy to make but a little time consuming.  Firstly we had to make the stuffing, the tofu casing and the marinade.  Then we rolled the tofu around the stuffing, crafted some drumstick legs and basted her with marinade.  We called her Tina Turkey and made some terrible Tina Turner puns ("simply the best")! 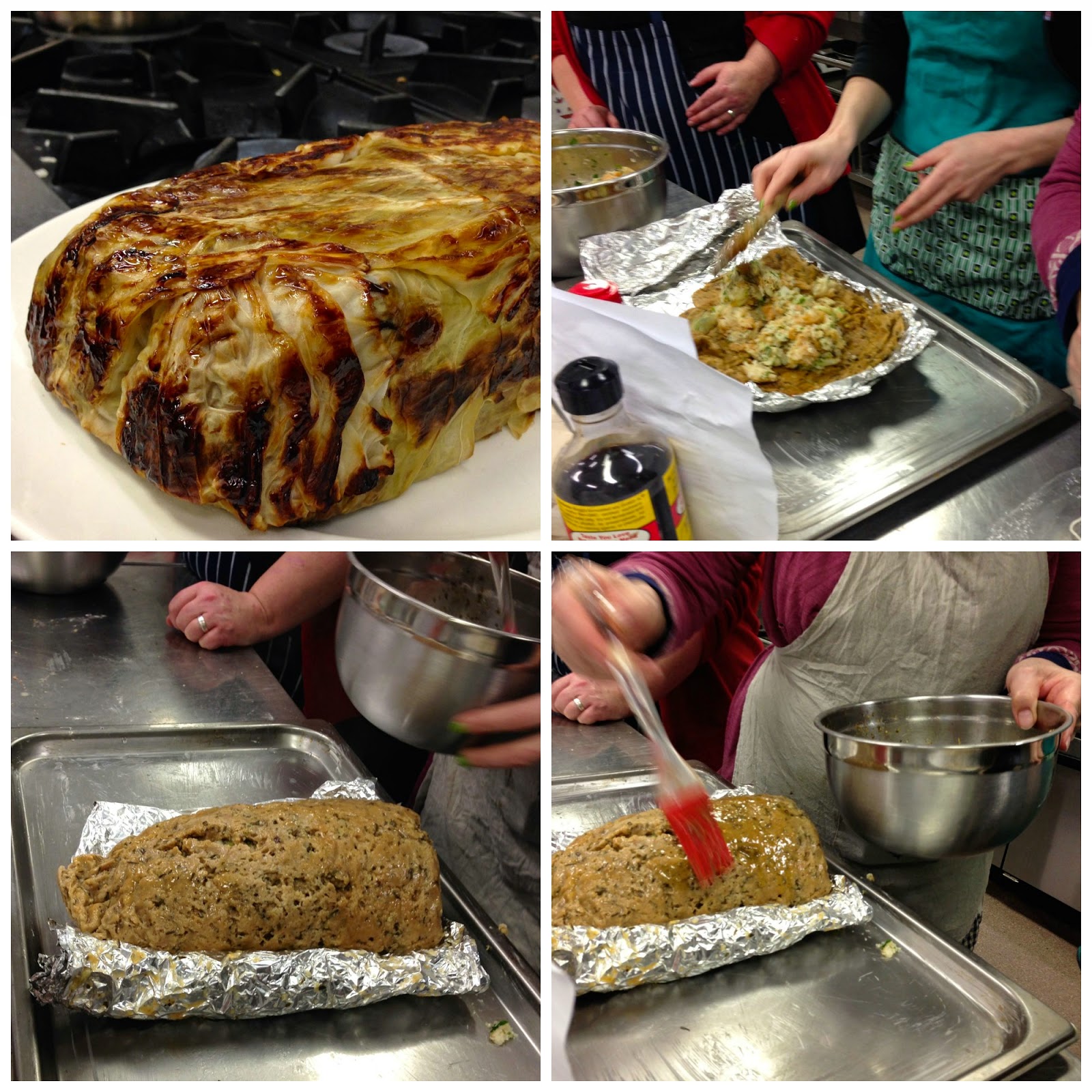 Meanwhile others made a nut roast covered in blanched cabbage leaves, a stuffed seitan roll and a mushroom wellington.  Cate and her lovely assistant Jen roasted some vegies and made three gravies - mushroom, red wine and miso.  (Or maybe others made the gravy.  Tina kept us a little busy!) 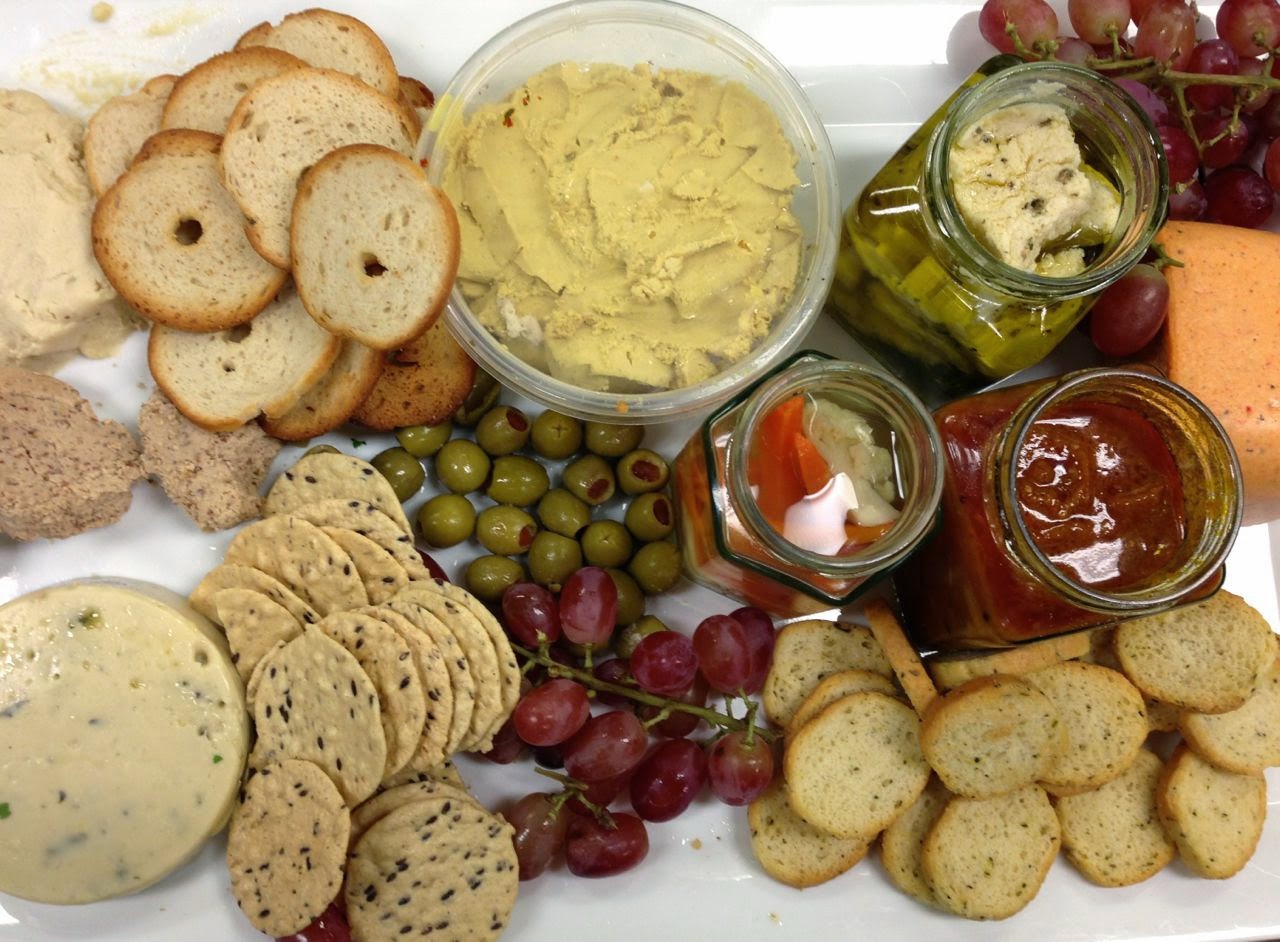 Cate and Jen also had a vegan cheese and crackers platter.  Doesn't it look amazing.  Sadly I barely touched it as I was too excited by all the roasts.  We took some leftovers home and I didn't think to take some cheeses. 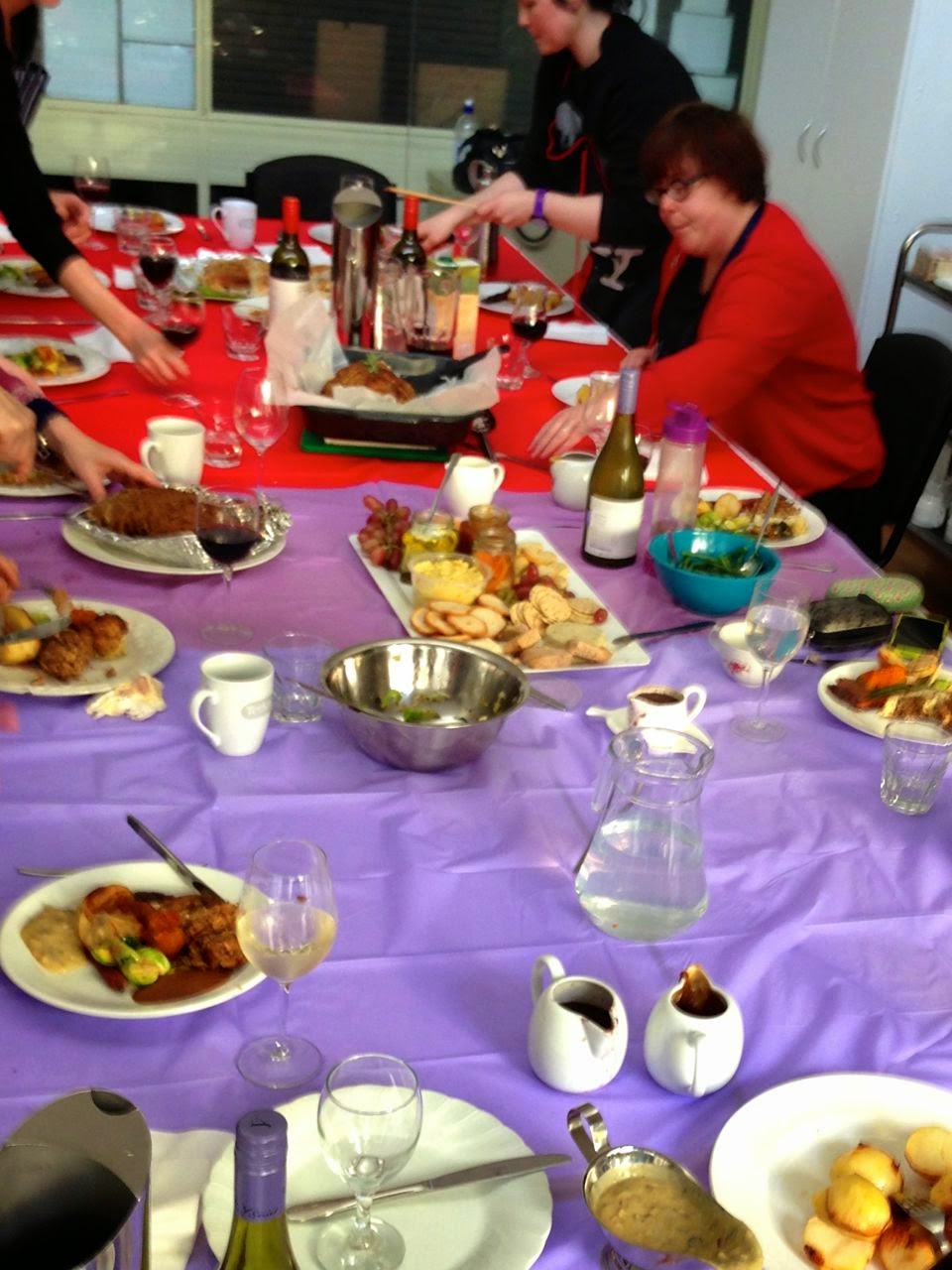 Finally we had the roasts and plates of vegies on the table, along with gravies, cheeses, wines and cordials.  It took some time for everyone to serve their meal.  But it was worth all the work that had gone into it.  Scrumdidliumptious!  And very very filling.  One roast is so filling.  Four had us bursting at the seams.  I think my favourite was Tina the Tofurky.  The tofu outside was really tasty and the inside was full of vegies and breadcrumbs.  I'd love to try this at home and maybe add a few nuts to the stuffing. 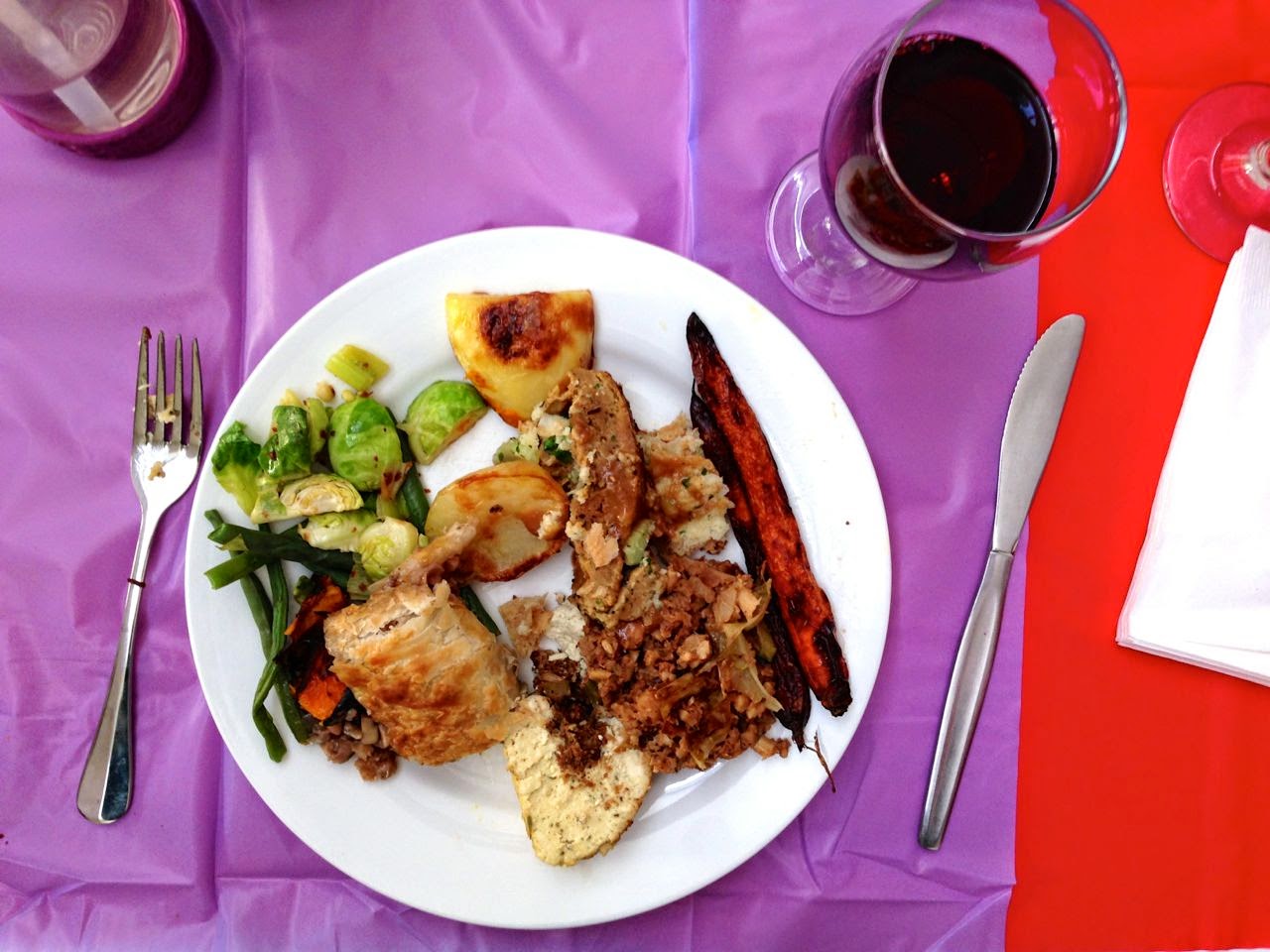 And then there was dessert.  I didn't take a photo but it all tasted great.  The ice creams and lemon tarts weren't quite set but the chocolate tart was so deliciously creamy and the tiramisu was surprisingly good.  I usually avoid tiramisu because of the coffee but this had no coffee and made me think I need to try making it myself.  I did notice that the vegans were excited by the desserts, but as a vegetarian it was the savoury roasts that most excited me.

Many thanks to Cate for a fun and yummy class.  (Sadly this was her last cooking class in Melbourne before heading overseas to live.)  For further reflections and better photos, head over to check out Veganopoulous' post on the masterclass.


Weekend notes:
A few random notes on my weekend 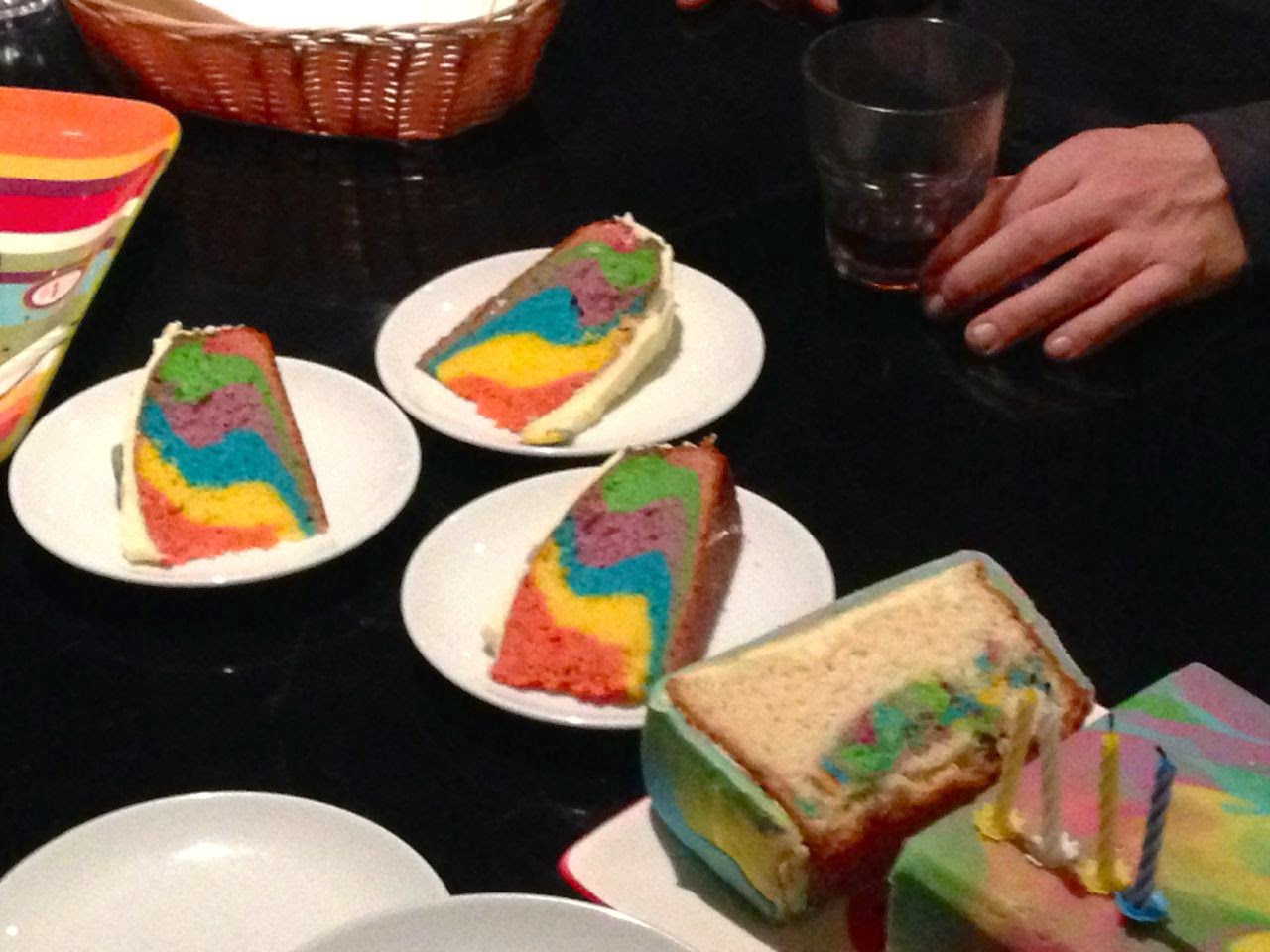 So you see I'm only human
And this machine is made of people
Although I need someone to remind me.
'Cause everyone has a number.
Posted by Johanna GGG at 21:40