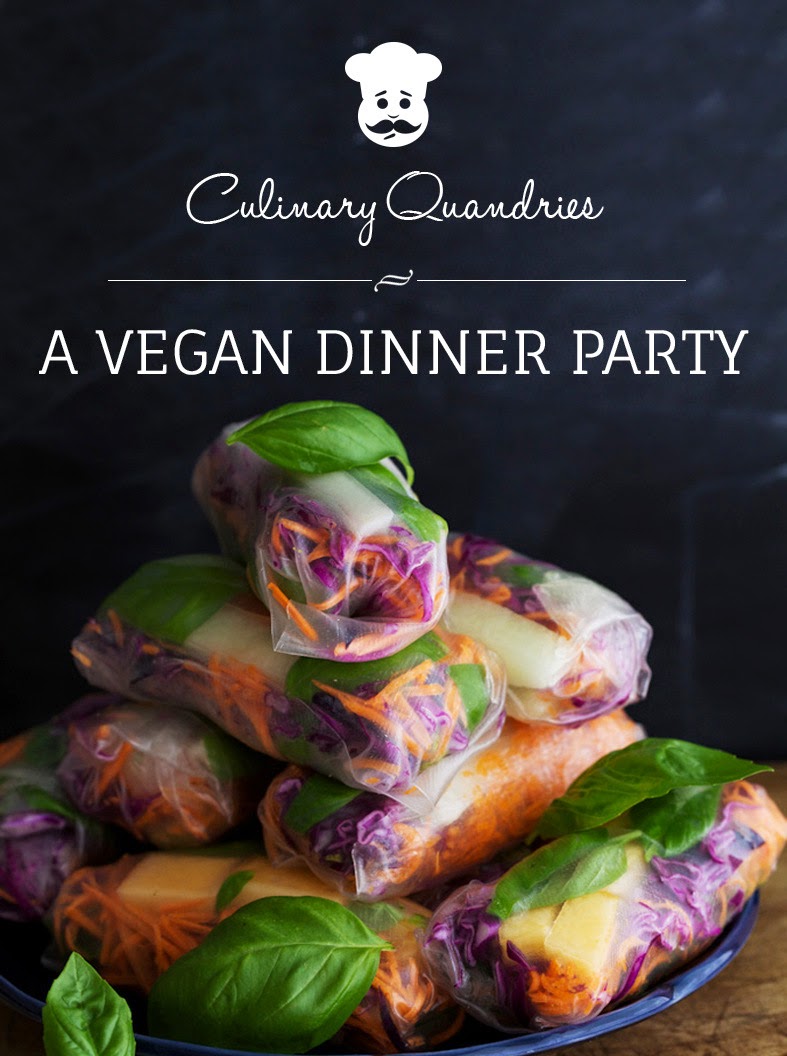 I have long been a fan of the recipes by Janet at the taste space blog, so I was pleased to be asked to review an e-cookbook, A Vegan Dinner Party by Janet Malowany, Anya Kassoff and Allyson Kramer (published by Erudition).  Given the combined extensive experience of these writers, there is no surprise that this is a collection of innovative vegan recipes.  These recipes are far lighter than the usual rich dinner party fare and yet still impressive.

The cookbook is aimed at people who are not familiar with vegan cooking.  The introduction gives an overview of veganism and vegan ingredients, with a promise that you wont miss the meat, dairy and eggs in these recipes.  At the end of the book are a few notes on unusual ingredients.  While I doubt these recipes would appeal to some of the hardcore carnivores that I know, I think anyone who is interested in trying new dishes would enjoy them.  Most of the recipes are gluten free too.

The recipes are arranged into Starters, Mains and Desserts.  The Starters include some great dinner party ideas like the Roasted Red Pepper Hummus and the Stuffed Jalapenos.  I was not keen on the inclusion of a couple of salad recipes for starters.  That may be just me as I am sure I do see salads listed with starters elsewhere.  And the Chickpea and Apricot Salad with the Pineapple Ginger Cilantro Dressing looks rather tasty.

The Mains section has some showstoppers that I would love to be served at a dinner party: Black Bean and Avocado Enchiladas, Broccoli Stem Risotto, and Cellophane Noodles with Crispy Vegetables.  A few recipes like the pizza or the onion flowers are in need of accompanying dishes.  Some ideas for menus would be really helpful and would bring together some of the recipes in the book.  More notes about making meals ahead would also be useful for dinner party planning.

The Desserts section is packed with the sort of spectacular recipes that make a dinner party memorable. The dishes are healthy and fun but have oodles of flavour. How good do these twists on recognisable recipes sound: Vegan Panna Cotta Teacups with Raspberry Compote and Chocolate Peanut Butter Pie with an Almond Coconut Crust!

I was excited to review the book because it motivated me to try some of the recipes.  It was easy to choose recipes I wanted to make.  I still have many more I want to try.  (NB All the photos in this post are my own except the cover photo at the top).  Here are the recipes I made:

The recipes I tried were delicious and would stand up to being part of a dinner party menu without weighing you down.  I would have liked to try more of the desserts but most of them were either too summery for this time of year or too rich to justify making it for our small household.

I was interested to look at the e-book formatting.  I have only used a few e-cookbooks.  This one was the first I have seen that isn't just a pdf document.  It showed me the potential of online publishing.  I loved the drop down menu, the section for the reader to type notes and the ability to include video demonstrations of techniques.  Every recipe had a photo and some had step by step photos.  While I still love to hold and browse a hardcopy cookbook, I am fascinated by the technological capabilities of e-books.  I was quite amazed at how easy it was to browse this e-book.

What I really disliked was the need to click between ingredients and step by step instructions.  It is best practice on the internet is to minimise clicks.  Many of these clicks seemed unnecessary and it made it awkward to be clicking backwards and forwards between the ingredients and the instructions while making dishes.  I have since discovered that while the ingredients just on one page on iBooks, when viewing the e-book online the ingredients stay at the bottom of each page that has the instructions for that recipes.  I prefer the online recipe format but the iBooks download had a better photo display.

Overall I would certainly recommend A Vegan Dinner Party for anyone who wants to cook and share interesting vegan recipes.

Giveaway by Janet:  One of the authors, Janet, is currently holding a giveaway of this e-book on her blog at the taste space.  You need to be quick as she will draw the winner on 20 June 2014.

To Purchase: A Vegan Dinner Party is now available to buy directly on the Erudition website, where it can be read on computer/tablet via the web browser and downloaded for offline reading as iBooks or Kindle formats.

Disclosure: I was given a free e-book voucher by Erudition.  I was not required to write a positive review and all opinions are my own.
Posted by Johanna GGG at 01:00