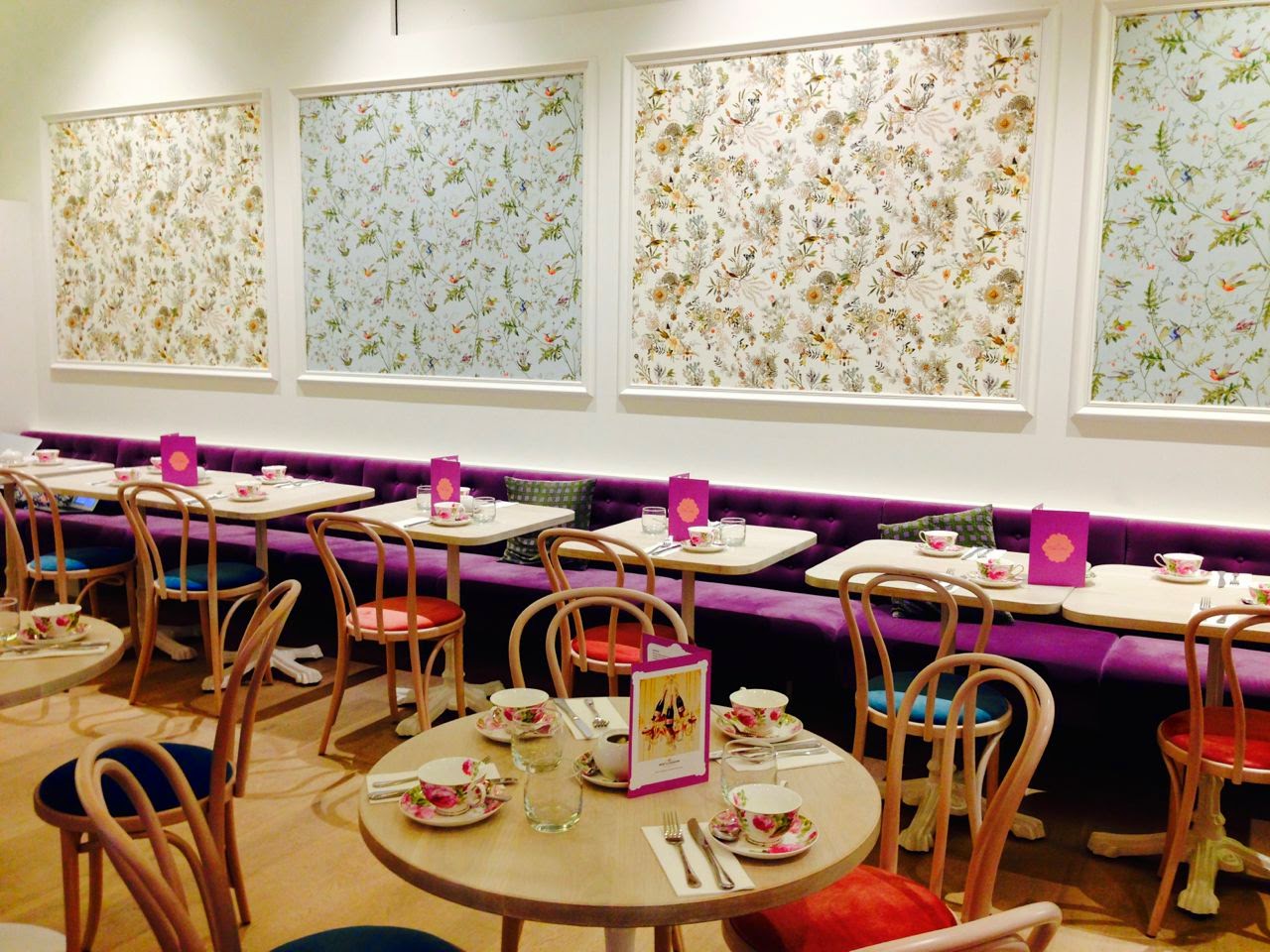 The Tea Salon is now closed but read on about the Melbourne Emporium
You might say that it was love at first sight when I first spotted the Tea Salon.  When the new Melbourne Emporium shopping centre opened recently, I found myself going down an escalator.  I glanced down at the pretty fabrics and chinaware of the Tea Salon and it was like my life took on soft focus as I dreamed of sipping tea there, pinky in the air, wearing a suitably floaty Laura Ashley dress. 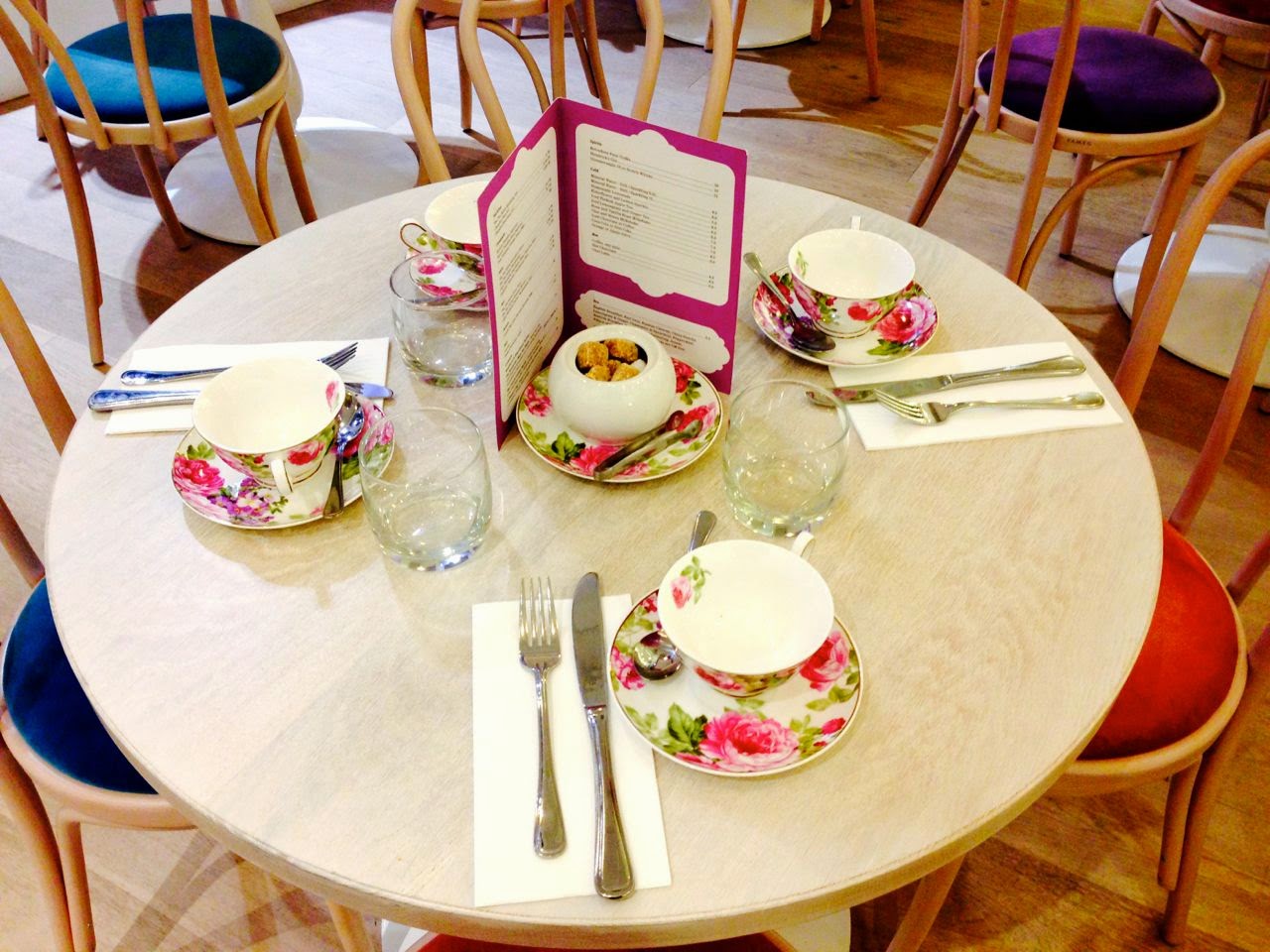 It wasn't long before I arranged to meet my mum there for morning tea.  My main problem was finding the Tea Salon again.  A few escalator rides up and down the Emporium and a visit to the information desk (once I found that) and I was yet again admiring the elegance of the place.  It sits oddly in a very modern minimalist shopping centre (more about that further down the post).  Once inside, you are transported to a world of Midsomer Murders and Miss Fisher's Murder Mysteries (without the murders of course)! 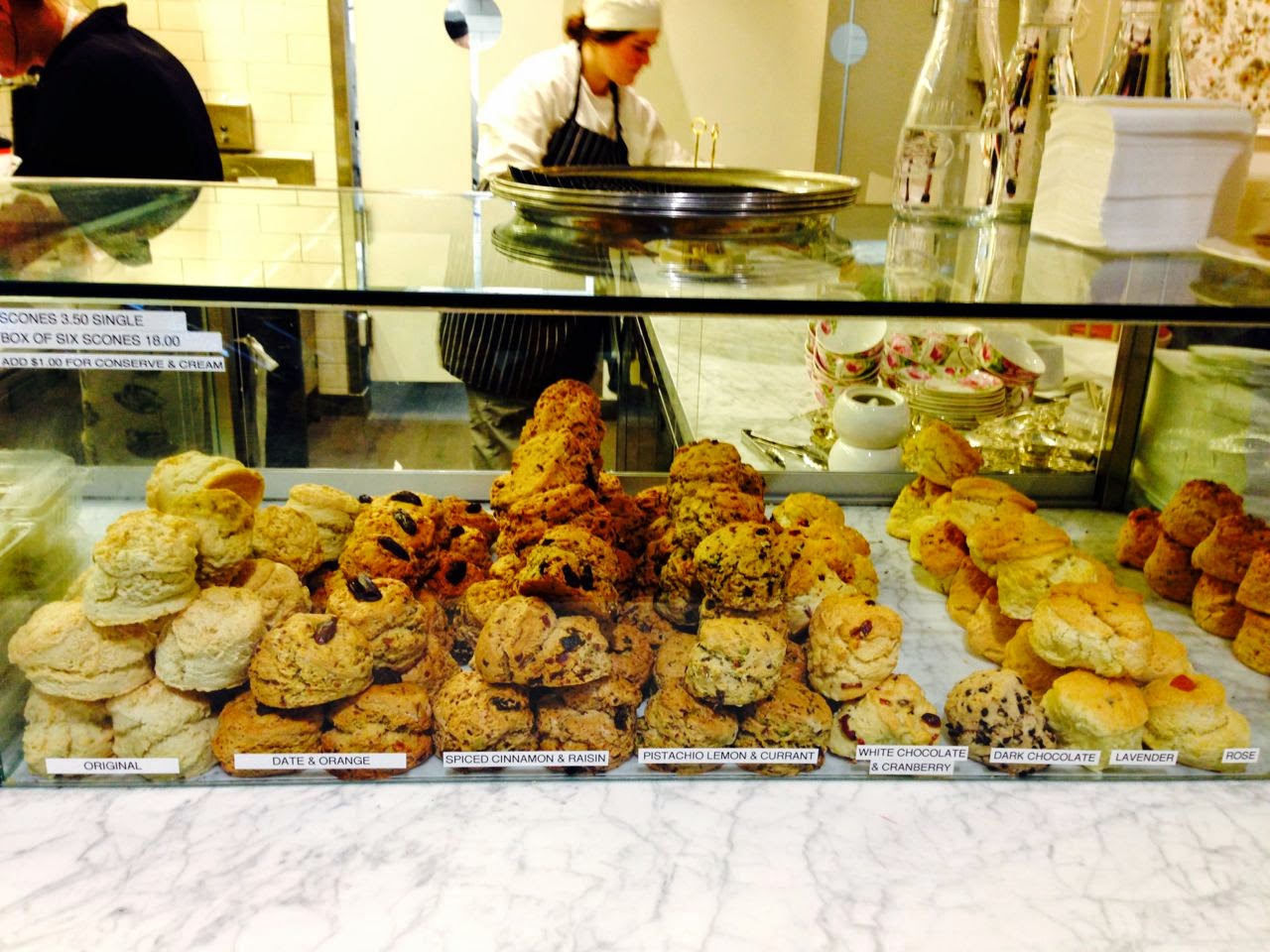 Not only did I like the look of the Tea Salon.  I was impressed by the range of scones.  The menu has a top ten list of scones.  There is something for everyone.  This is your place for rose or lavender scones, chocolate chips or cheddar, wheat or gluten free.  I was excited to be able to choose a savoury scone.  My rosemary leek and parmesan scone with herb butter was lovely. 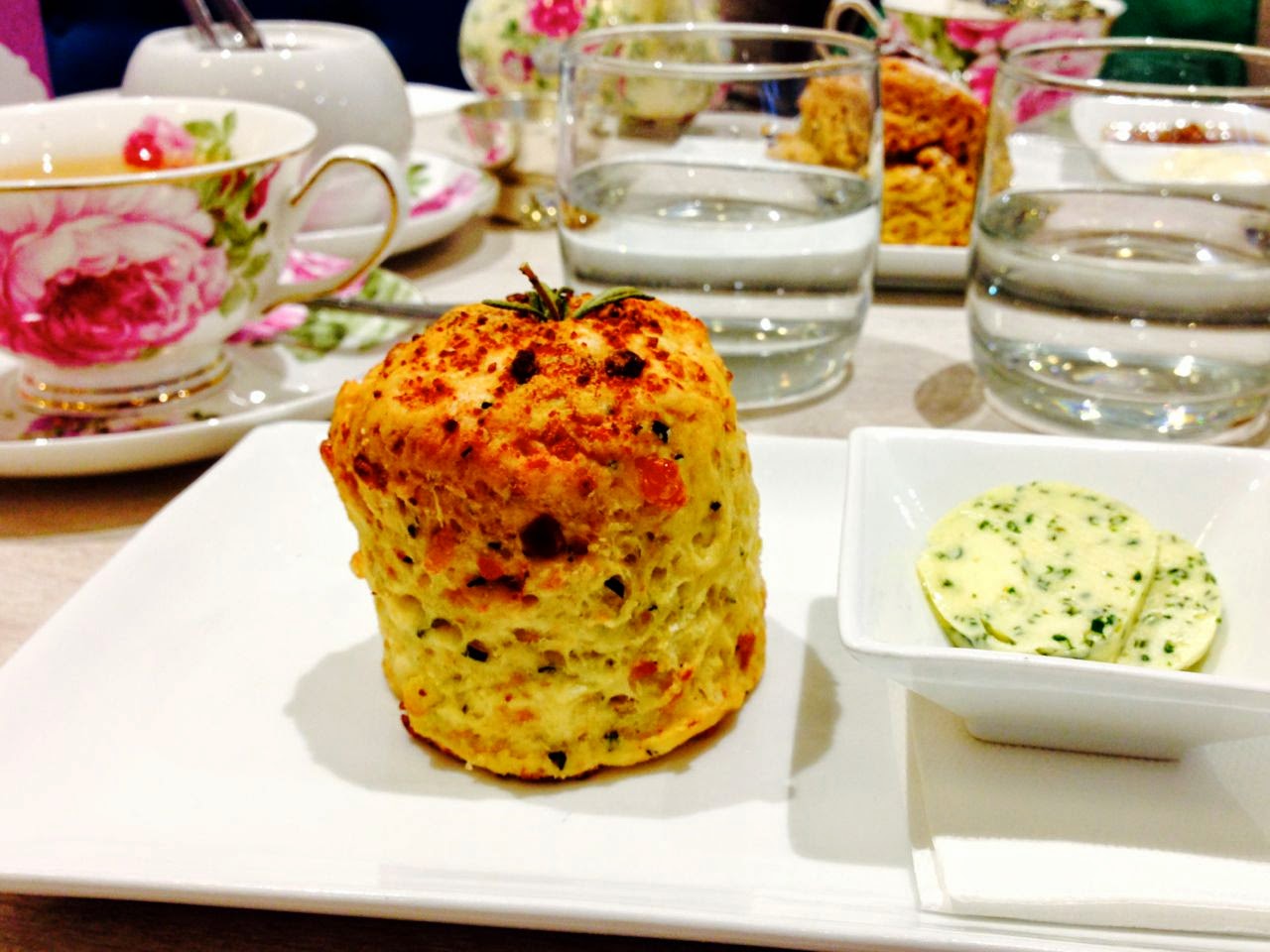 My mum went for a sweet scone: date and orange with a chunky marmalade and cream.  I've never had marmalade on a scone before but this marmalade was great with melt in the mouth chunks of peel.  We both had a pot of tea with our scones.  My mum's floral tea pot and strainer had the elegance and charm that the decor led us to expect.  The Turkish apple sea was sold out.  Instead I chose a peppermint tea which came in a disappointingly plain silver teapot. 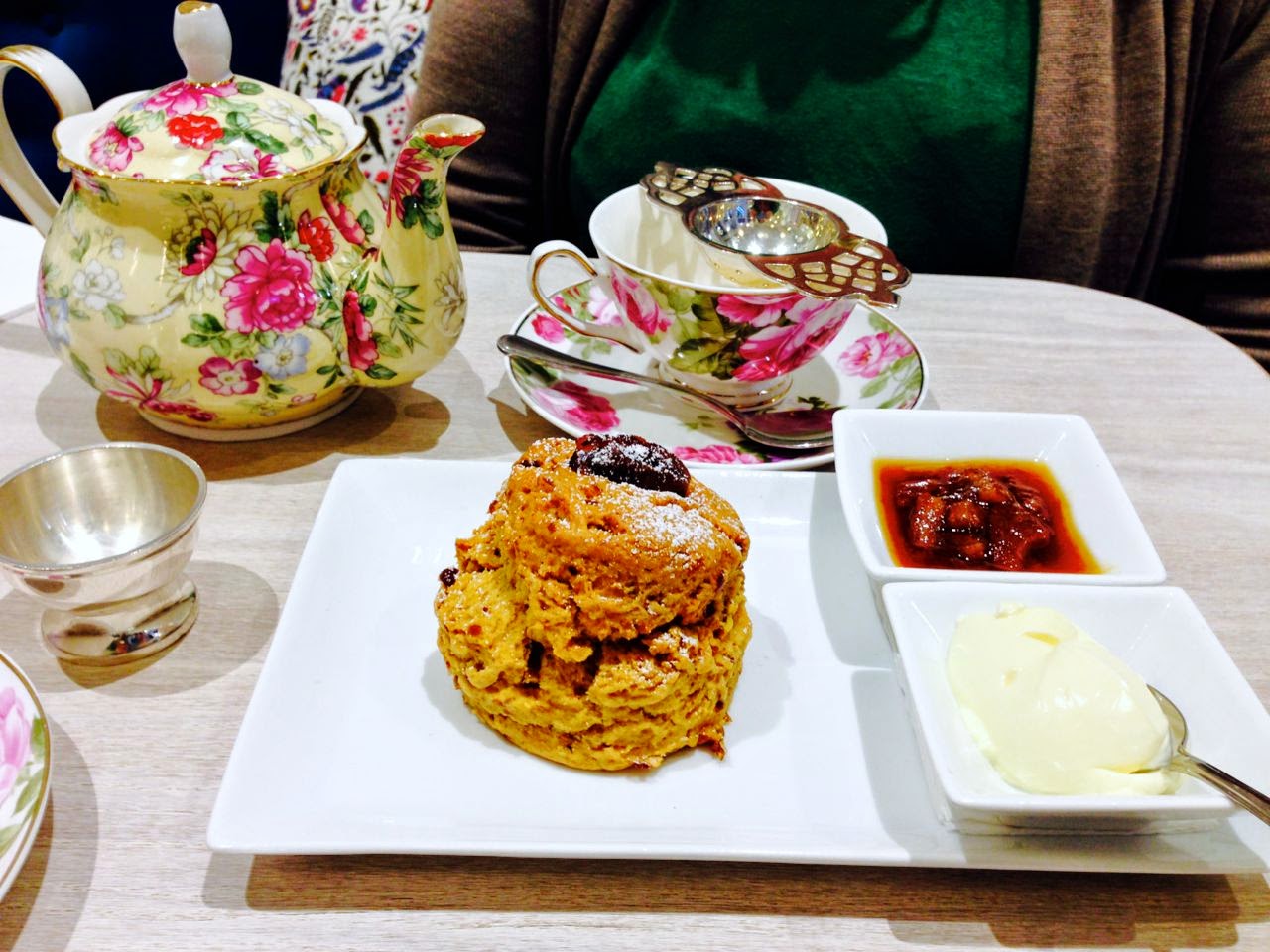 We had a great time and enjoyed the ambiance but I recommend the place with some reservations.  It is not cheap.  Two pots of tea and two scones cost us $23.  The meals look great but I am reluctant to pay $13.95 for a savoury scone with feta, relish, rocket and tomatoes or $39 for a high tea.  My mum found her tea to be too weak and I think one scone per person is a bit stingy.  Most places I go for a Devonshire tea serve two scones with tea.

I hope to be back but perhaps not as often as if the prices were lower.  After all the Tea Salon is inside a shopping centre that has other eating options.  I wont write about the top floor food hall today but I wanted to share some photos of the Emporium as work in progress. 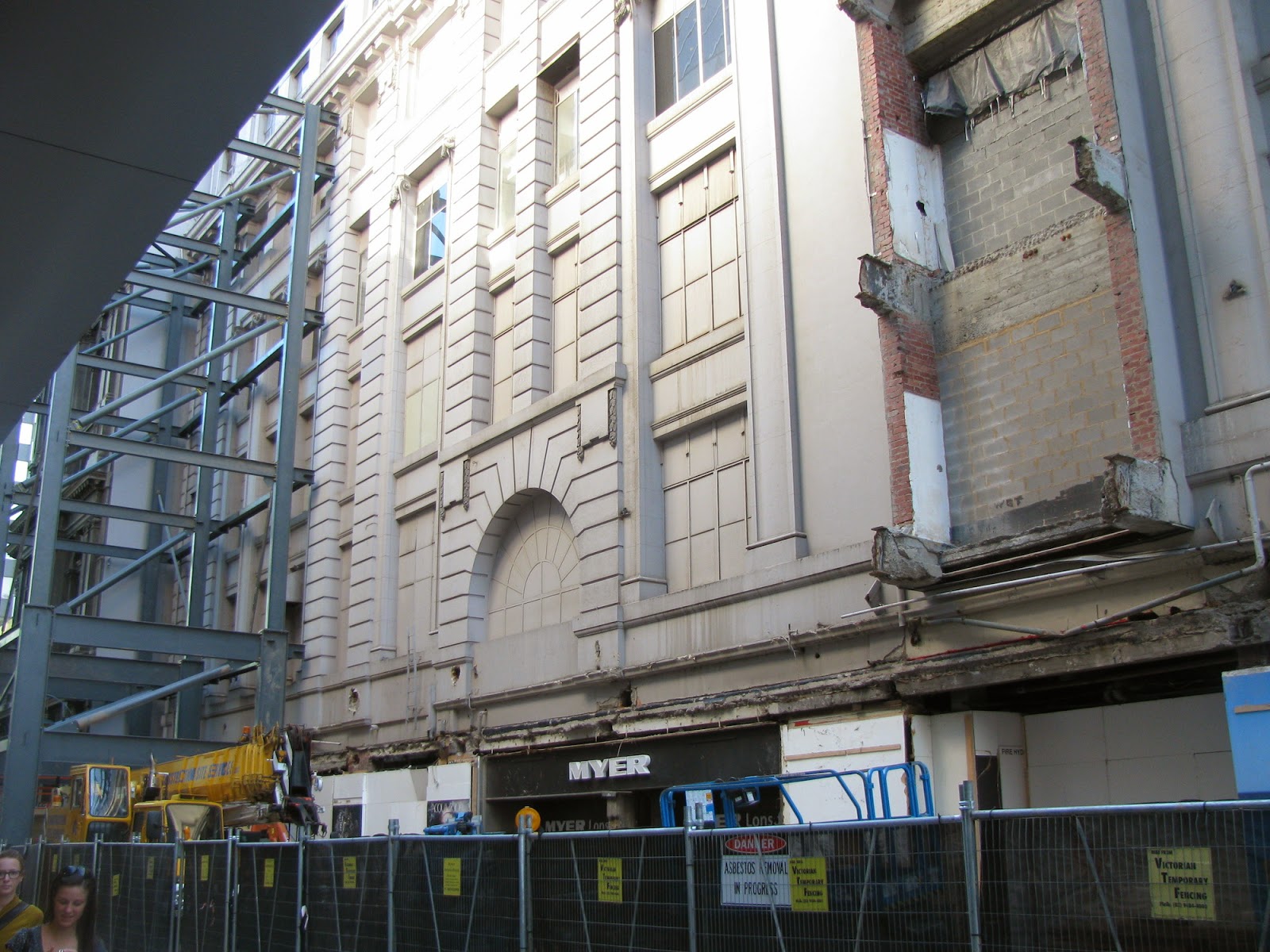 I have managed to dredge up some old photos of the building works that transformed the old Myer Lonsdale Street building into the Melbourne Emporium.  Above is the old facade of the building on the Little Bourke Street side in April 2011 before it was demolished. 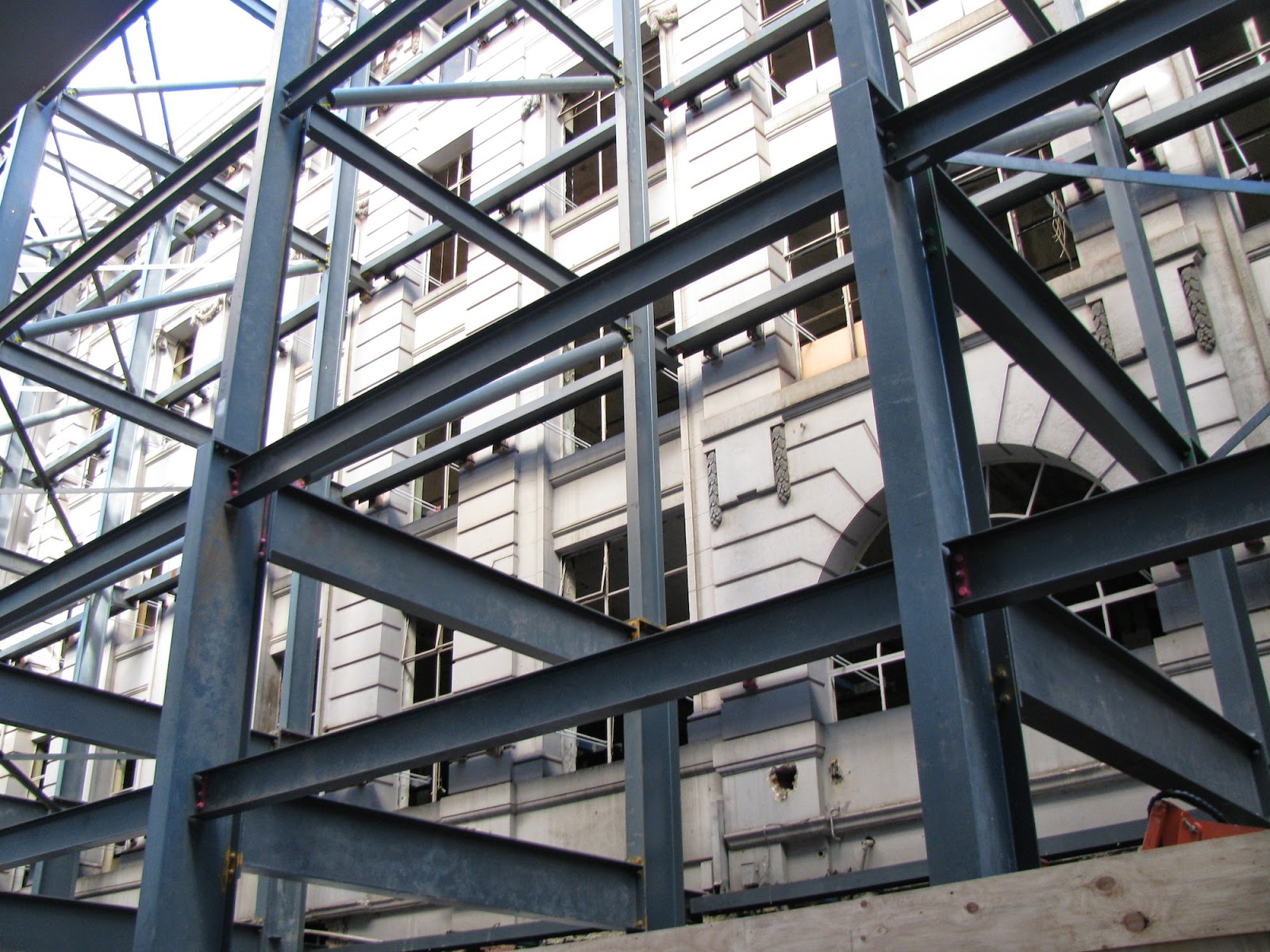 This Little Bourke Street facade photo was taken in July 2011.  It is being supported by girders.  I guess this was part of the demolition process. 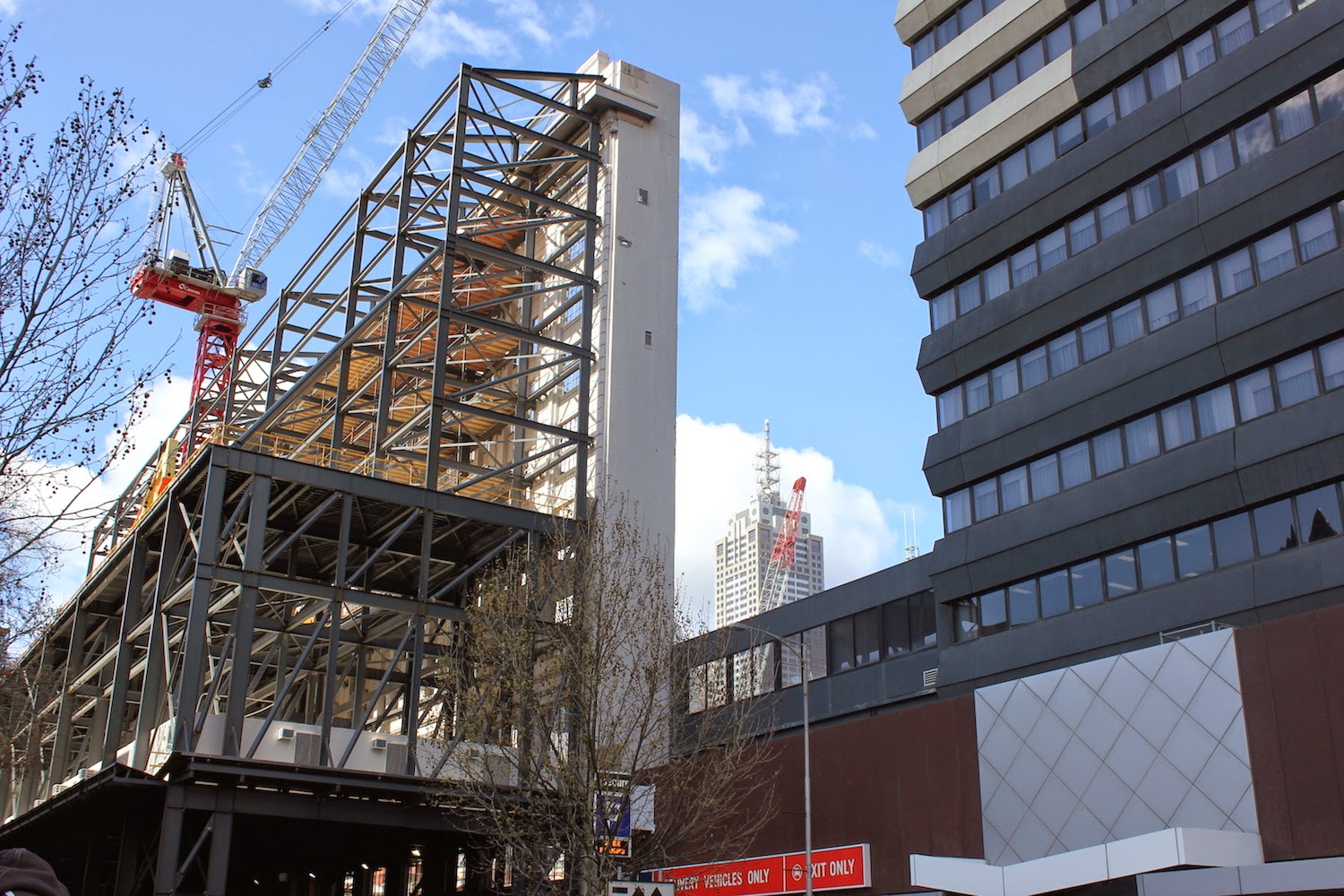 The facade in Lonsdale Street in September 2012.  A lot of support was need to keep the facade in place once the rest of the building started to go up. 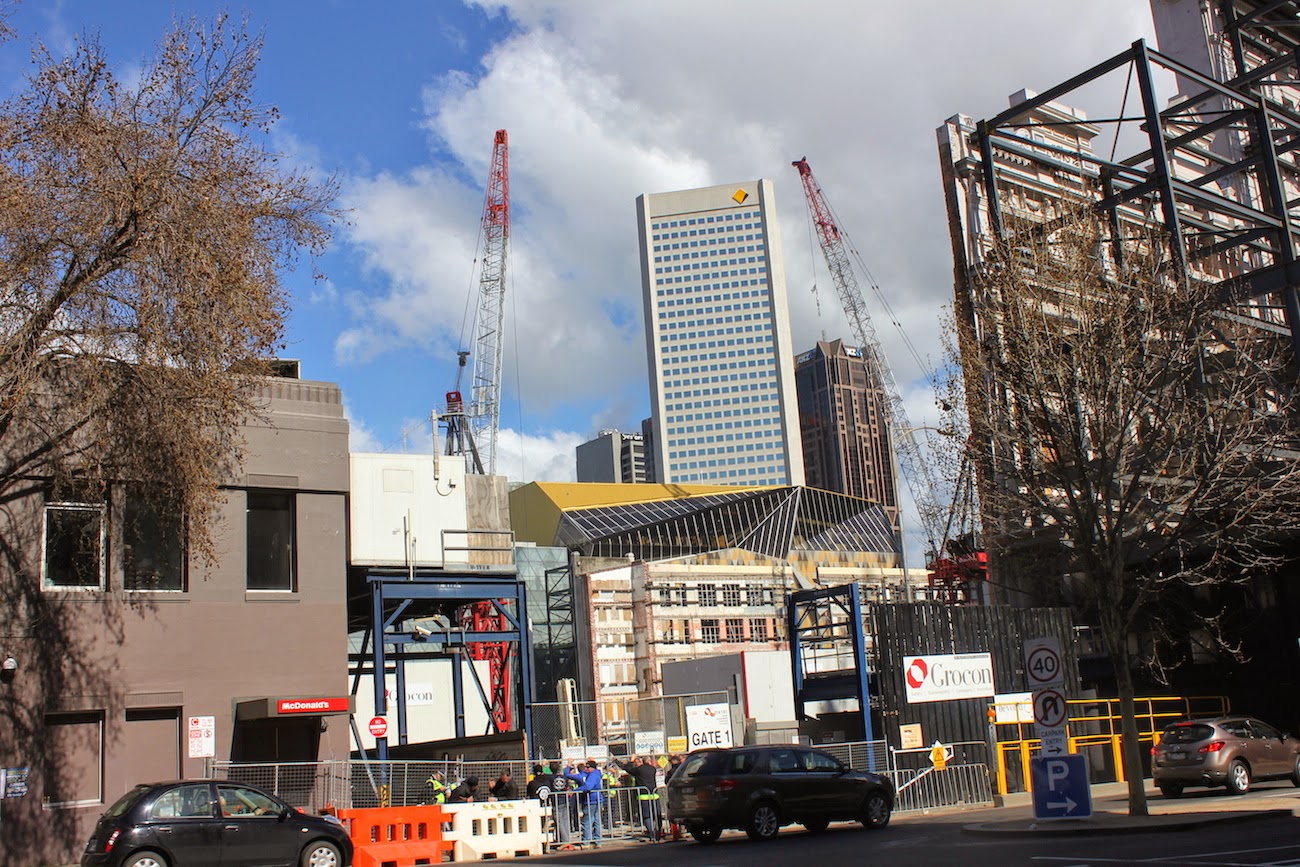 The other side of the Lonsdale Street facade at the same time.  I think this was around the time of the Grocon industrial protests.  I will not go into detail about this but it left a bad taste in my mouth about the building. 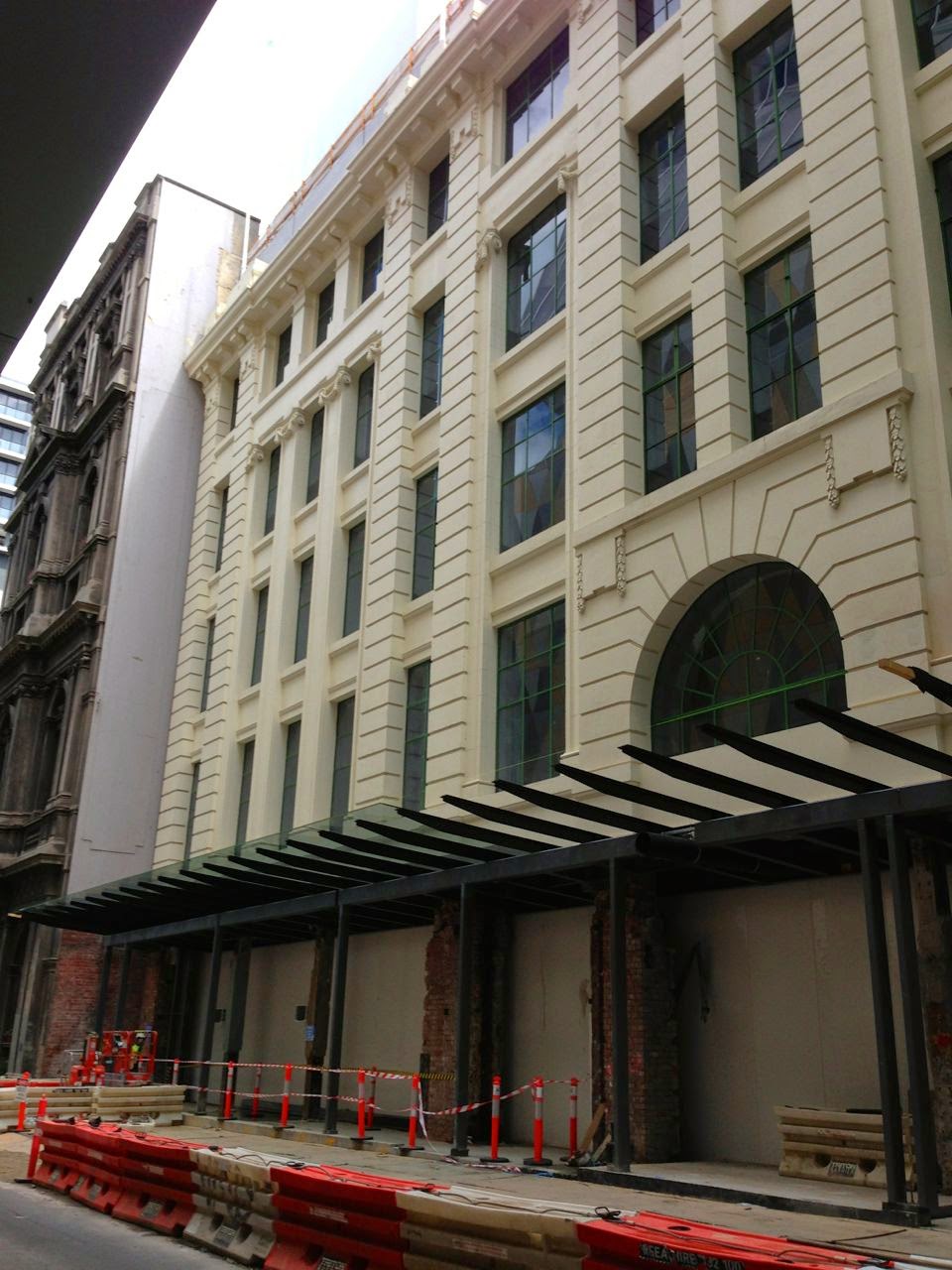 I then can't find any photos of note until February 2014, not long before the Emporium opened in April.  If you compare this to the photo of the old Little Bourke Street facade you will see that it is quite similar.  Same same but different! 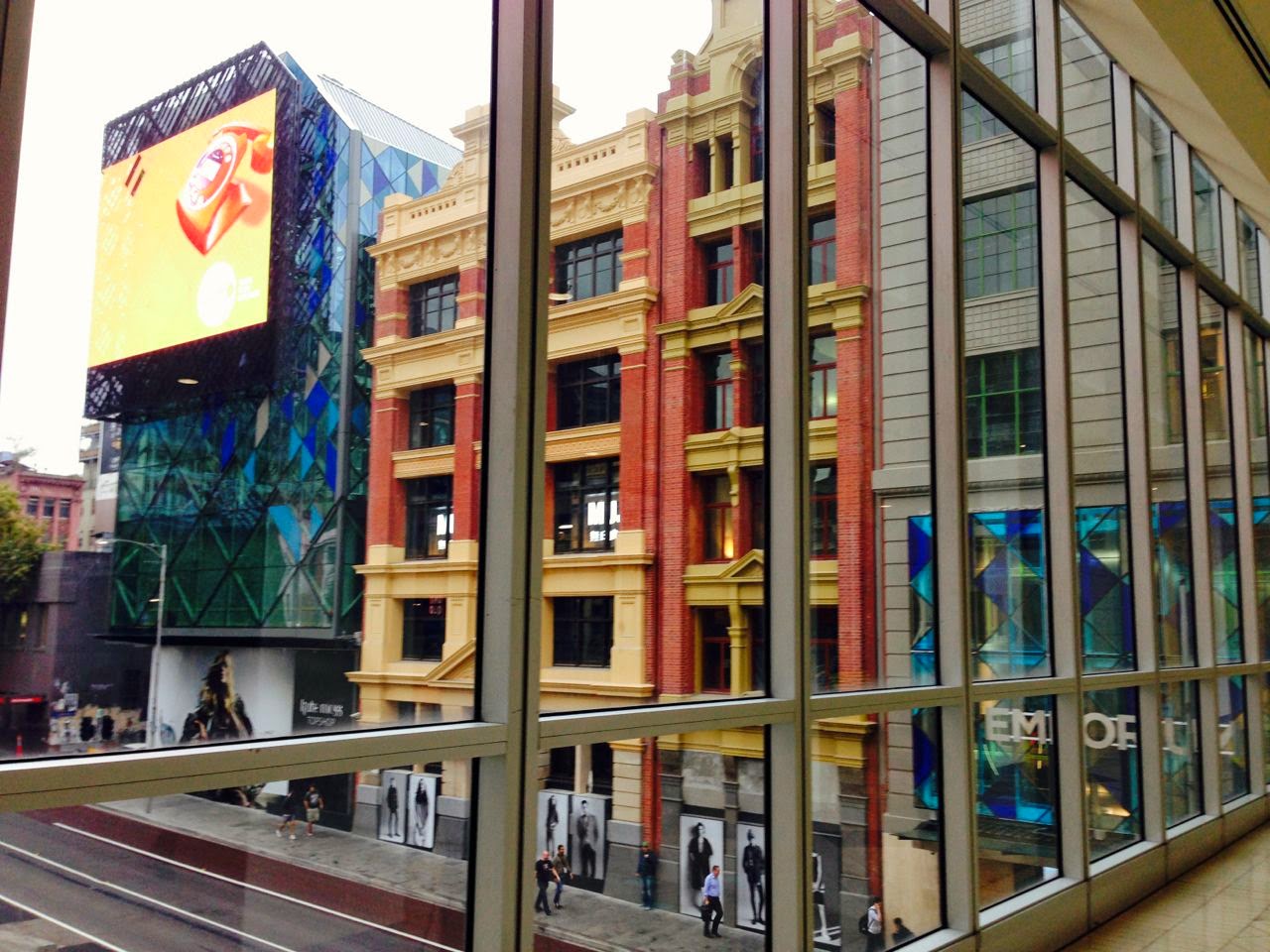 And finally here is the new facade from the walkway between Melbourne Central and the Melbourne Emporium.  In the below photo you can see that the old Myer sign and clock have been kept on the old Lonsdale Street facade. 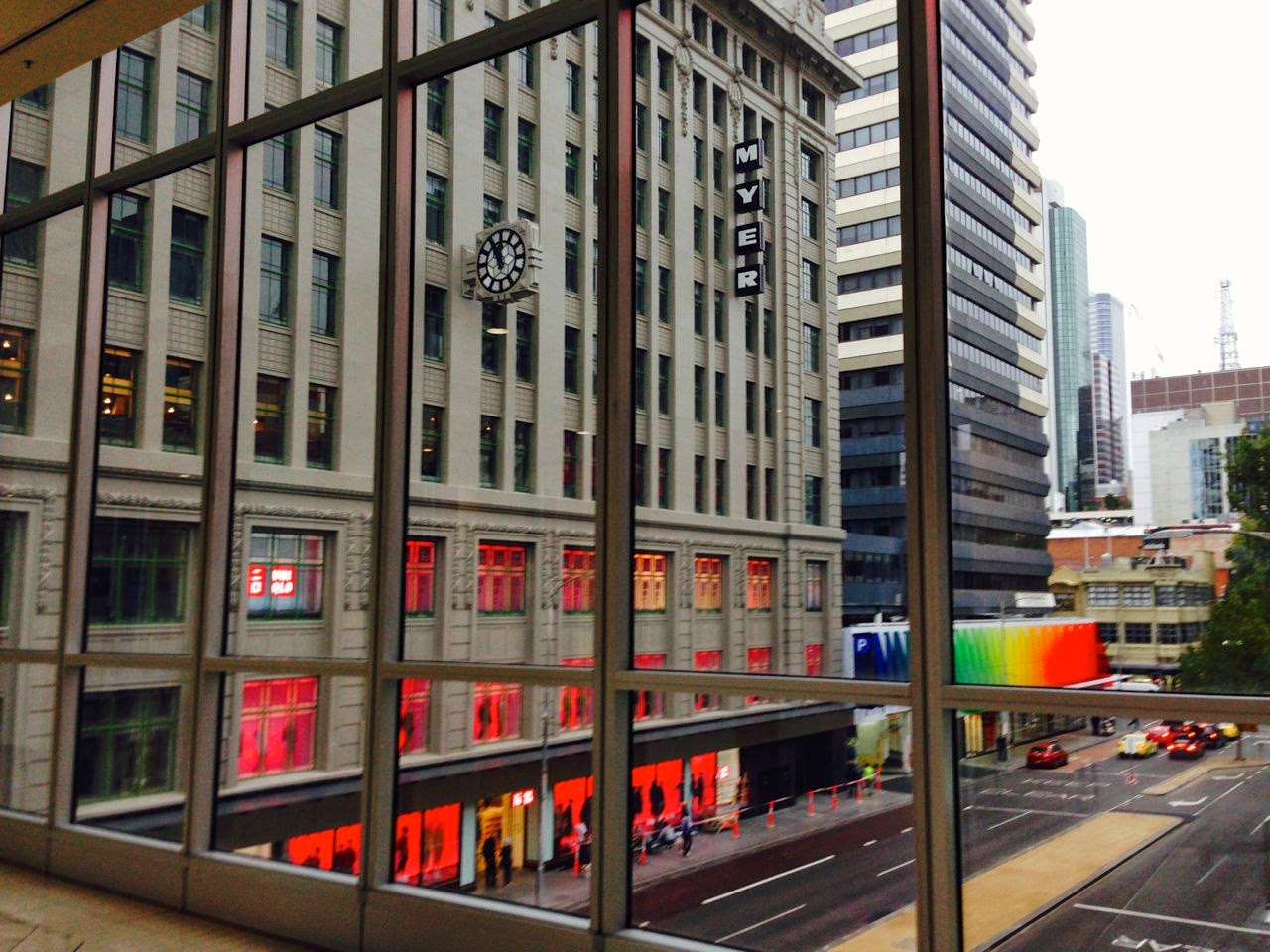 I like the way the facade has been preserved.  I like the colour in the new buildings.  However I am disappointed in the interior of the centre.  It is quite boring.  The shops don't interest me too much.  I think the Tea Salon is one of the best places in there.  Though I will hold off on judging the food hall until I had eaten there more than once. 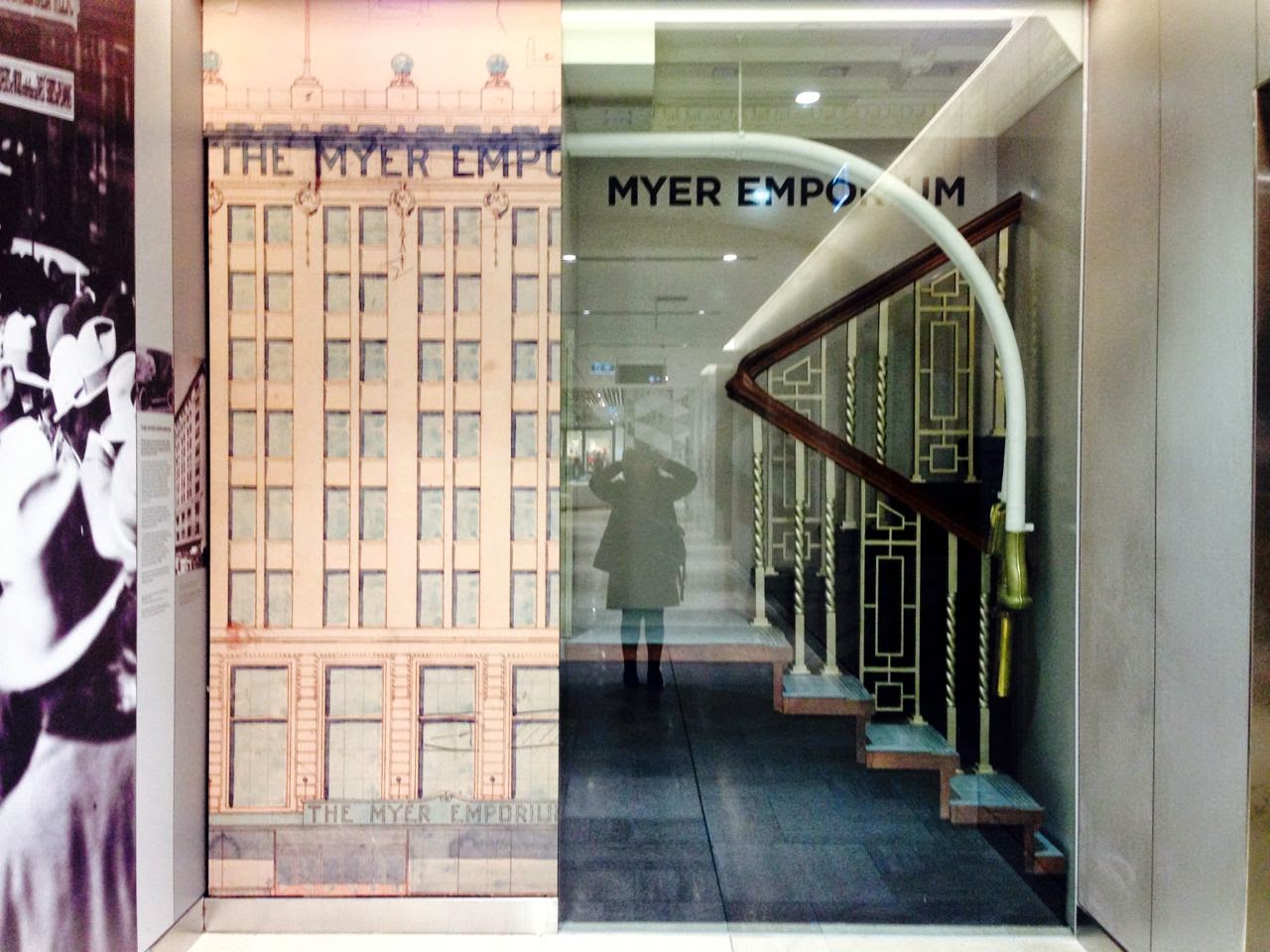 If you look carefully, or just get horribly lost, you might see this small acknowledgement of the old Myer store that has been replaced.  There is a storyboard with some information about the history of the building.  According to this, the 1926 Myer building was innovative and grand.  It was such an icon in Melbourne that when someone was bold we might say they had "more front than Myer".  Redesigning the site should come with some responsibility to history.  Sadly some developers seem more interested in money than heritage.

The new Emporium lacks the grandeur and vision of the Myer building.  It is all a very boring grey with little of interesting in design and few shops to excite me.  My main excitement about its opening is that the walkways joining Melbourne Central and Myer are open again.  I suspect I will mostly just pass on through the Emporium, with the occasional stop at the Tea Salon when I want something special.