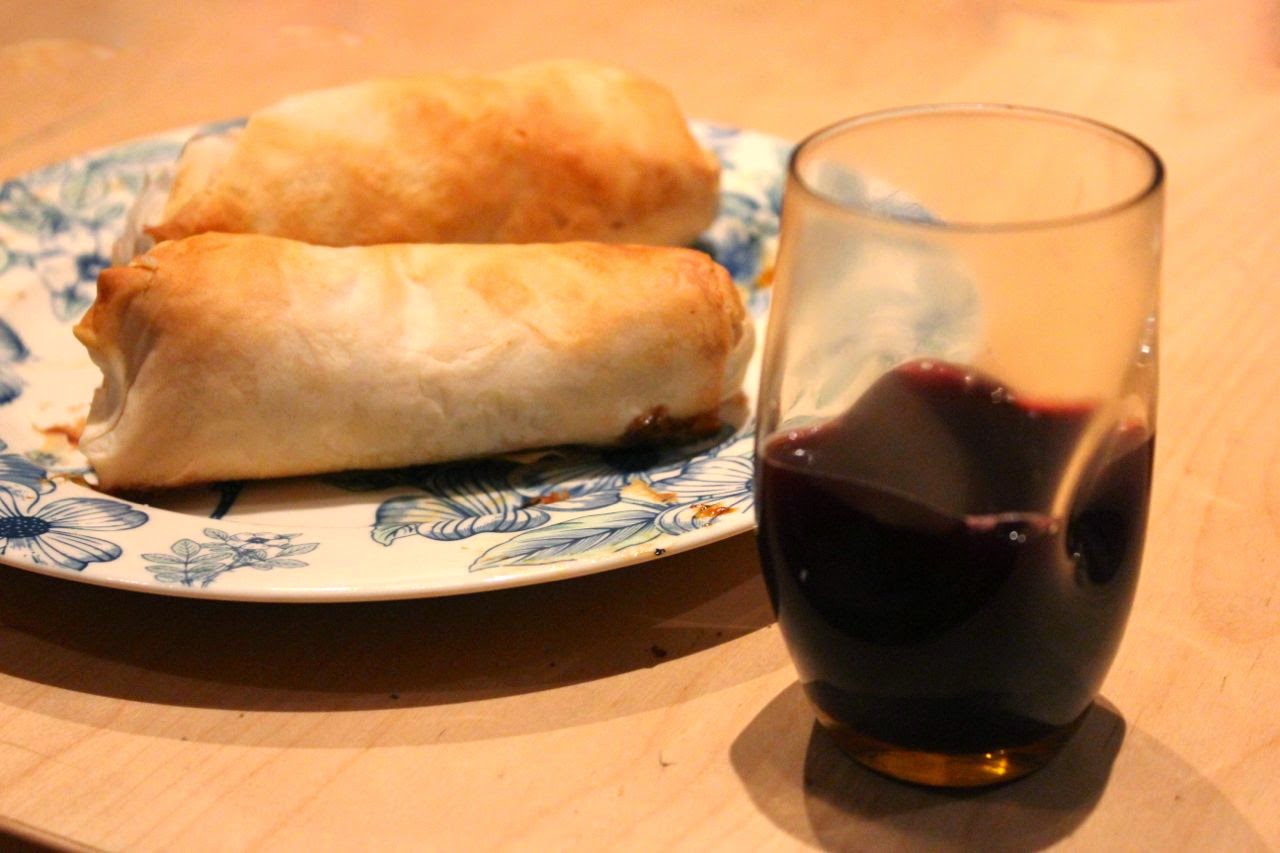 My mum is better than me at cooking for the recipes she tears out of newspapers and magazines.  This Queens Birthday weekend I helped her make an amazing dessert of apple and pumpkin pastries with spiced red wine.  It was a great way to end a day spent at the National Celtic Festival in Portarlington.  Long weekends are great for fitting in that little bit more. 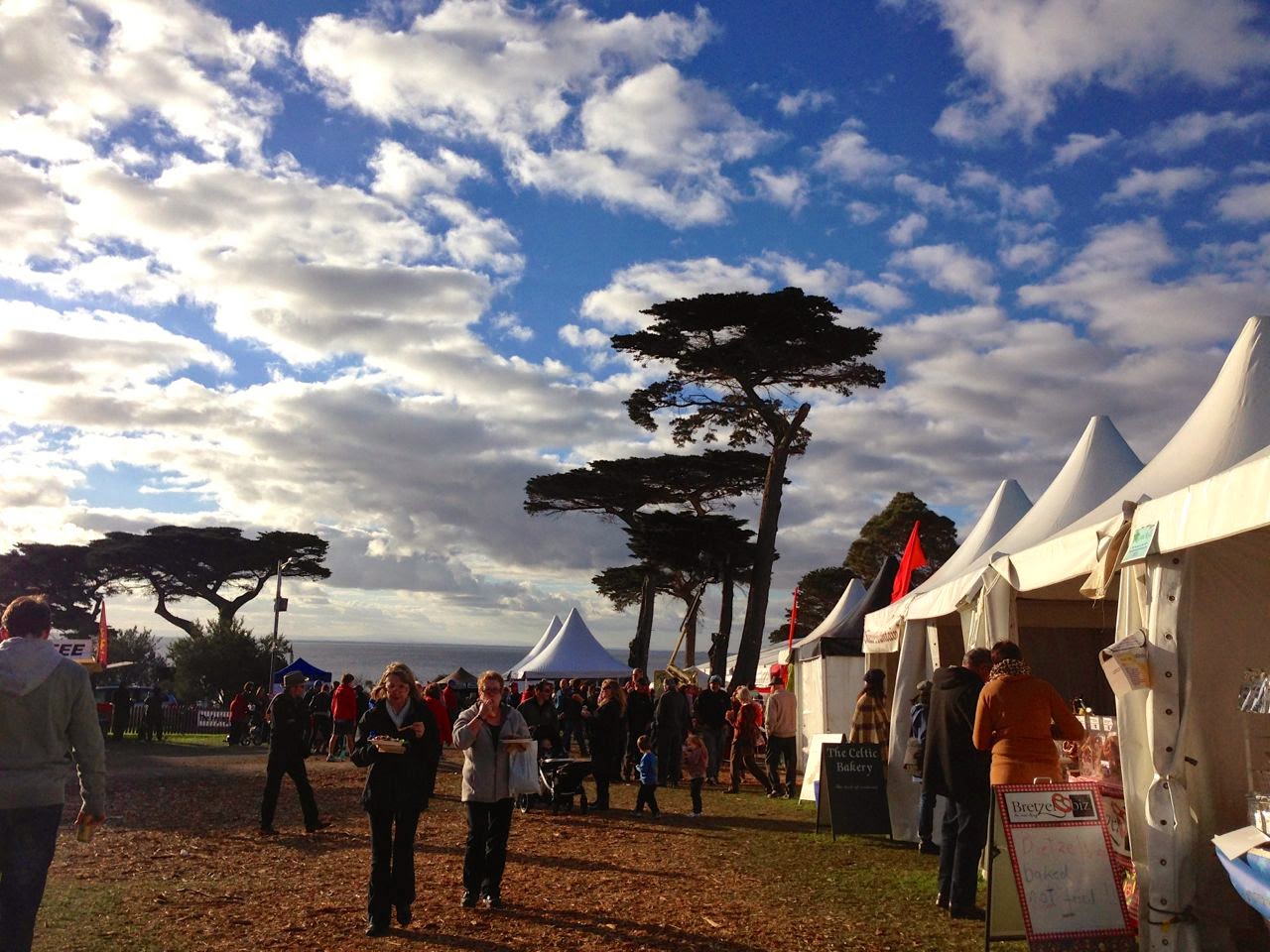 I think I really appreciated the relaxed sunny day at the National Celtic Festival on Sunday after spending my Saturday driving in the rain and trying to get my head around the mysteries of the Ikea As Is section.  (I got about three different stories about how to get the wardrobe ready for delivery and was at my wits end.)  We didn't buy tickets to the festival.  Instead we just wandered around the stalls and listened to music in the Village Hall tent for a gold coin donation. 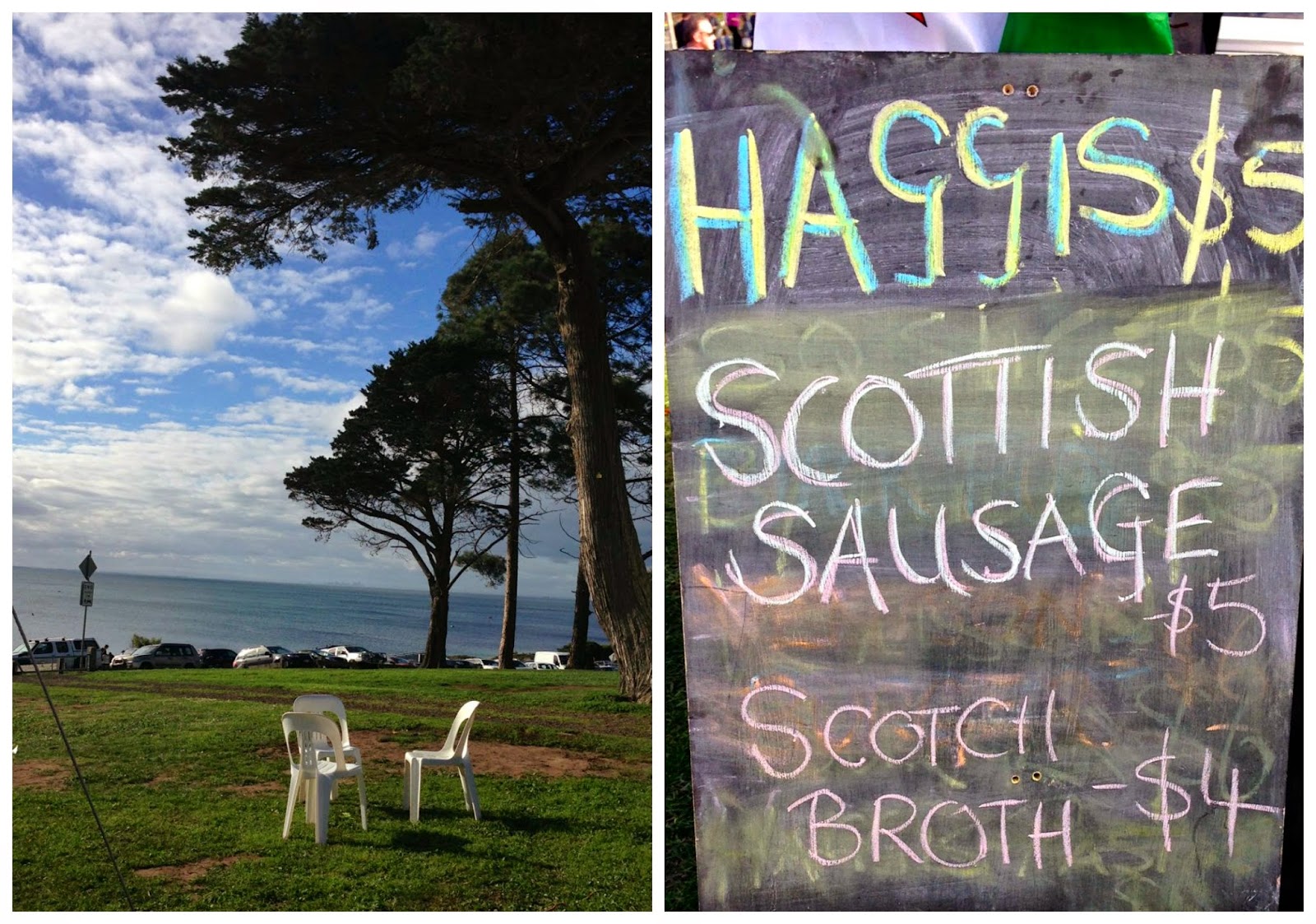 Apparently it was my third visit to the festival though I only remember the first when it was held in Geelong many years ago.  I really loved that the festival arena was on the grassy expanse between the high street and the sea with a kids playground in its midst.  After Sylvia finished hanging off some playground bars we met my parents and went in search of food.

There was no much chance of a vegetarian offering at the Scottish food stall, but my dad enjoyed the Scotch broth and haggis in a bun.  I went for the baked potato option, hoping for a bit of vegetables in the coleslaw.  Unfortunately the coleslaw was a very stingy serve.  I enjoyed the sweet food we shared more: profertjes (Dutch pancakes),  pretzel with salted caramel filling and jam filled doughnuts. 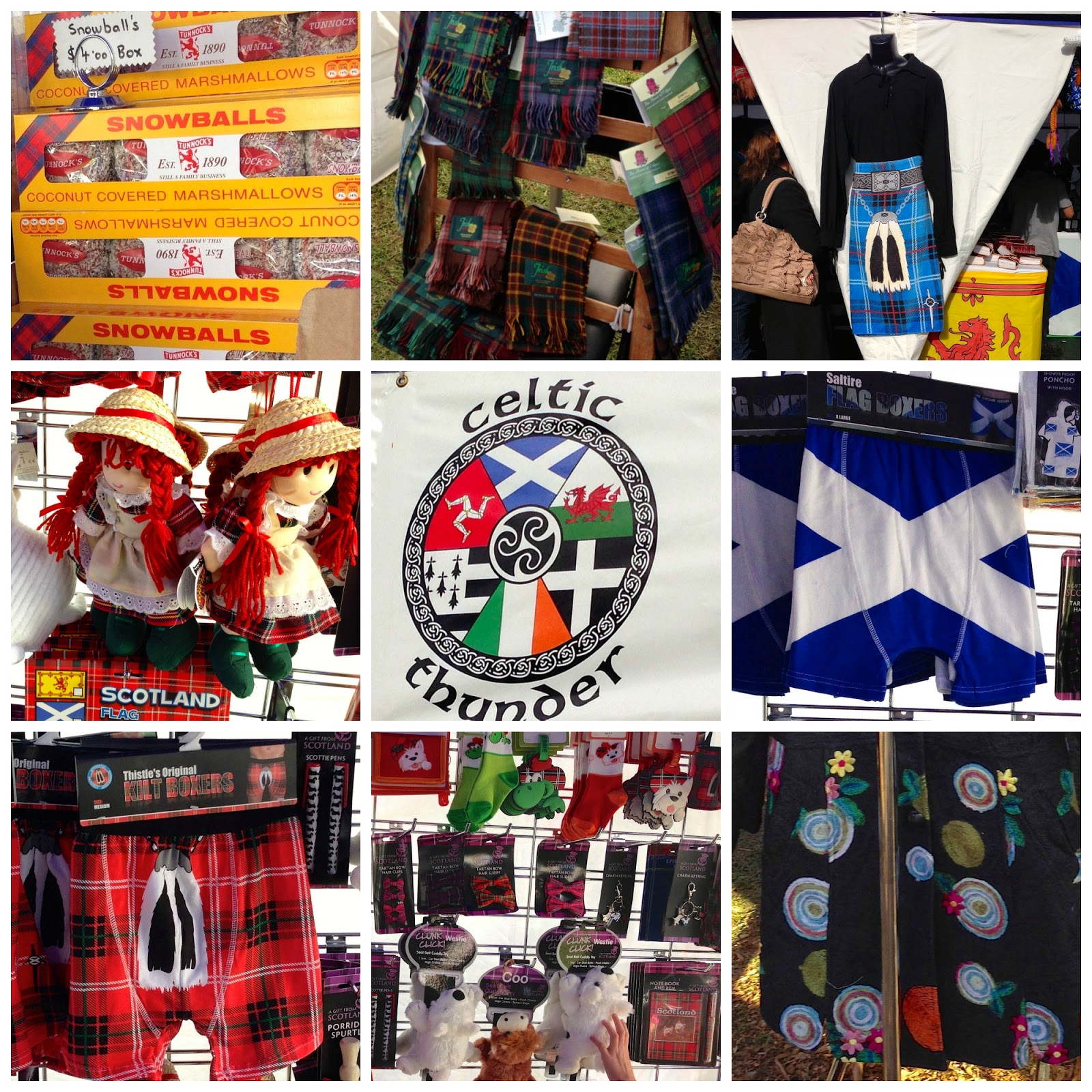 We enjoyed wandering around the souvenirs and craft stalls.  E bought a see-you-jimmy viking hat.  I was more tempted by decorated coats and rhubarb relish.  It was strange and comforting to see the sort of tartan tat they sell on the High Street in Edinburgh. 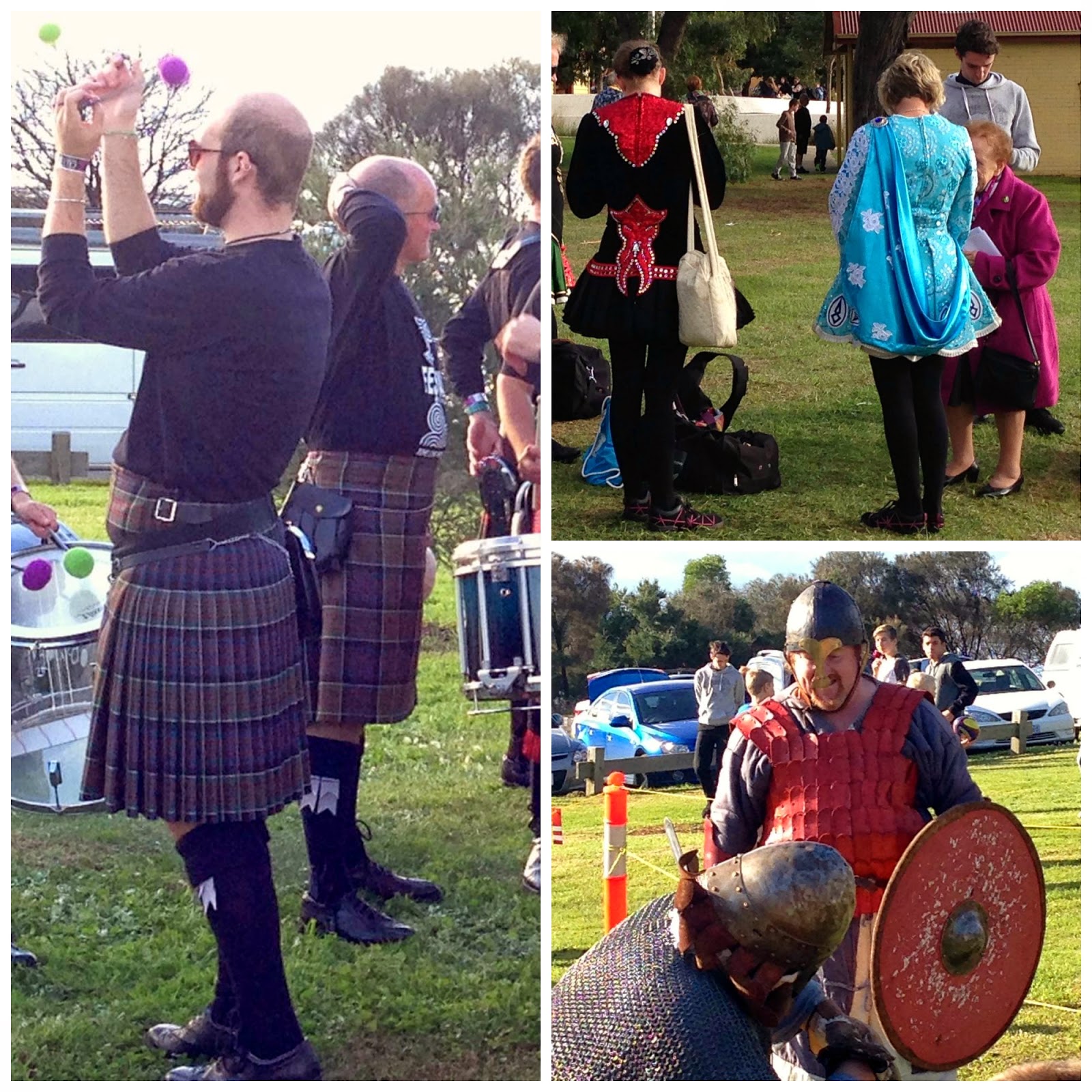 My two favourite moments were unexpected. I loved hearing a group of Scottish drummers practicing a tattoo that was so impressive a crowd had gathered to watch.  We couldn't see the drummers, only the crowd but at the end we saw three drumsticks thrown high into the air. We saw Kieran O’Connell and Shanakee play a poignantly slow version of the Angels song Am I Ever Going to See Your Face Again in tribute to Doc Neeson who died last week.

My mum, Sylvia and E went home a bit early, leaving my dad and me to see some more music and stalls.  I had been excited about seeing the Irish dancing but they performed at ground level and we were too far away to see much below the waist (which is where all the action happens with Irish dancing).  However overall it was a great good day.  Maybe next year we will pay for tickets to see more performances. 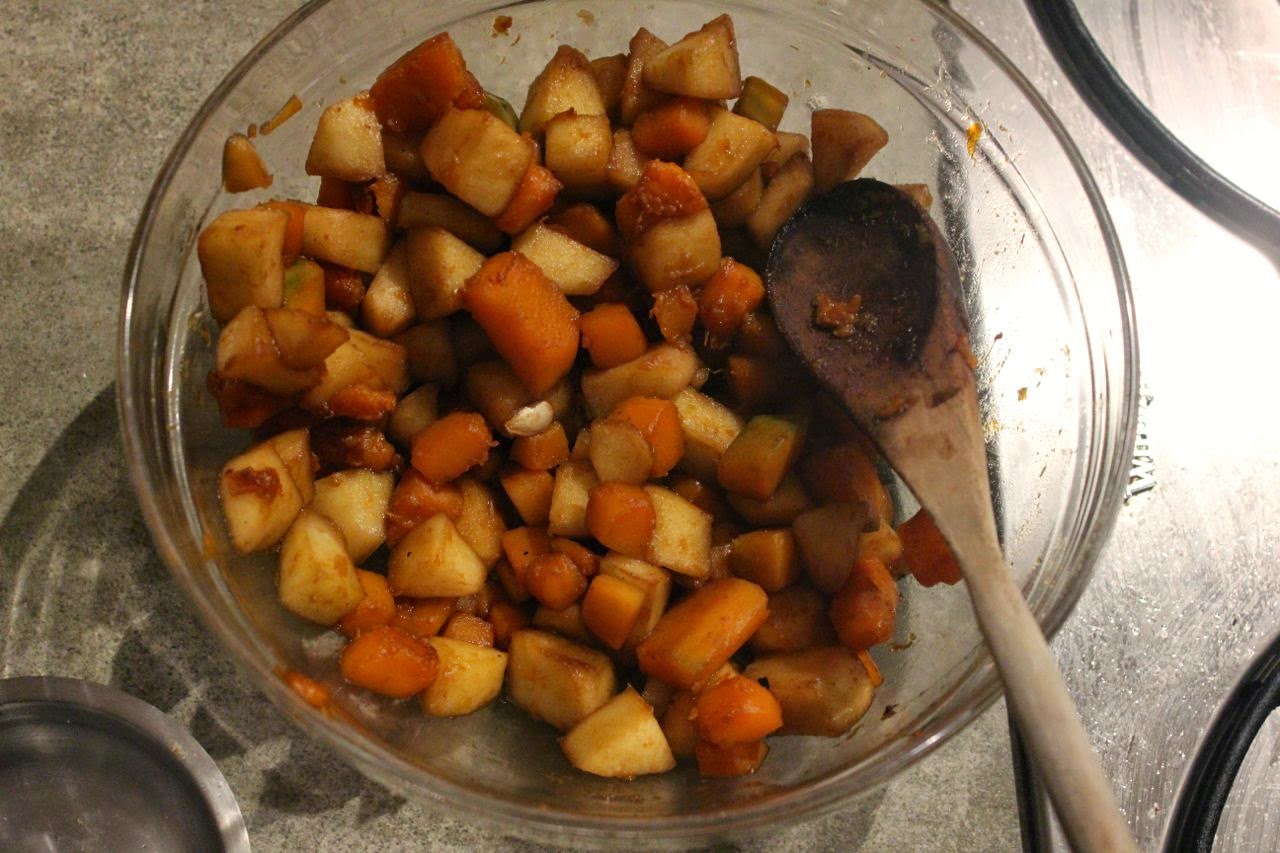 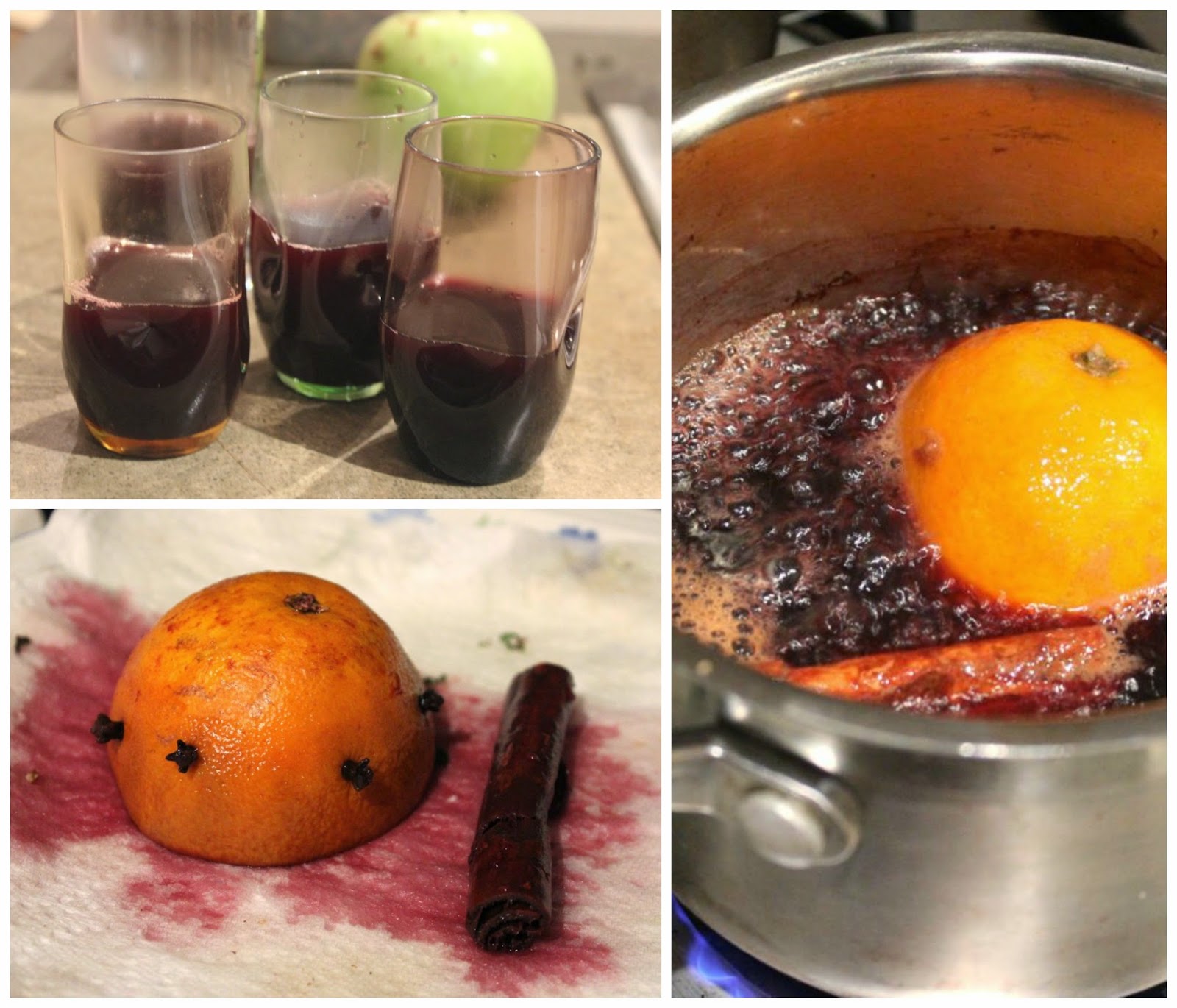 Mum had clipped a recipe from her local newspaper.  It was written by a chef from one of the local fine-dining restaurants, The Empire Grill.  I have checked the menu online and it doesn't feature there so I am not sure if they have served it at the restaurant or it is something he cooks at home.  He says it is the sort of dessert they serve in Central Europe where he is from.

The recipe reads as "a bit of this, a bit of that" rather than a precise recipe, yet it is the sort of dish that doesn't need exact measurements.  I actually give a little more detail in my version of the recipe! I don't know how long it took to bake the pastries.  It wasn't specified in the original recipe and I forgot to check with my mum.  I do know that her super hot oven probably took about half the time that my slow oven would take.  Precision can be overrated! 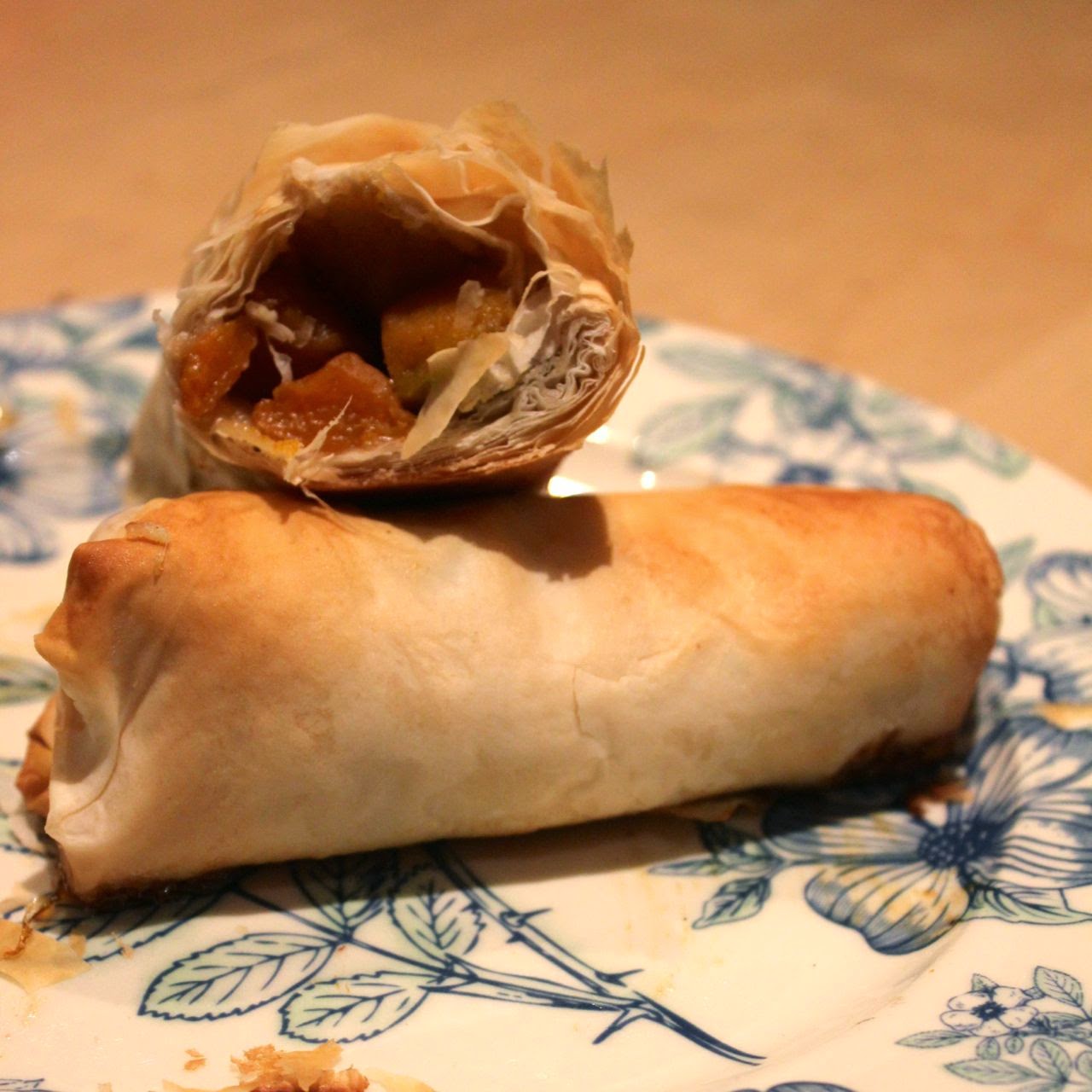 I loved this dessert.  It would be sure to impress at a dinner party with the addition of pumpkin in the pastries and the pairing with warm spiced wine.  It is such a simple pastry with the apple flavour predominating and yet the spiced wine gives it a complexity.  You could serve it to vegans if you check the pastry and wine are vegan.

E and my dad ate it with ice cream but I found that the wine was accompaniment enough for the pastries.  This is also a chance to use some fancy smaller glasses for the spiced wine.  We used some glasses that my parents have had since I was a small child. 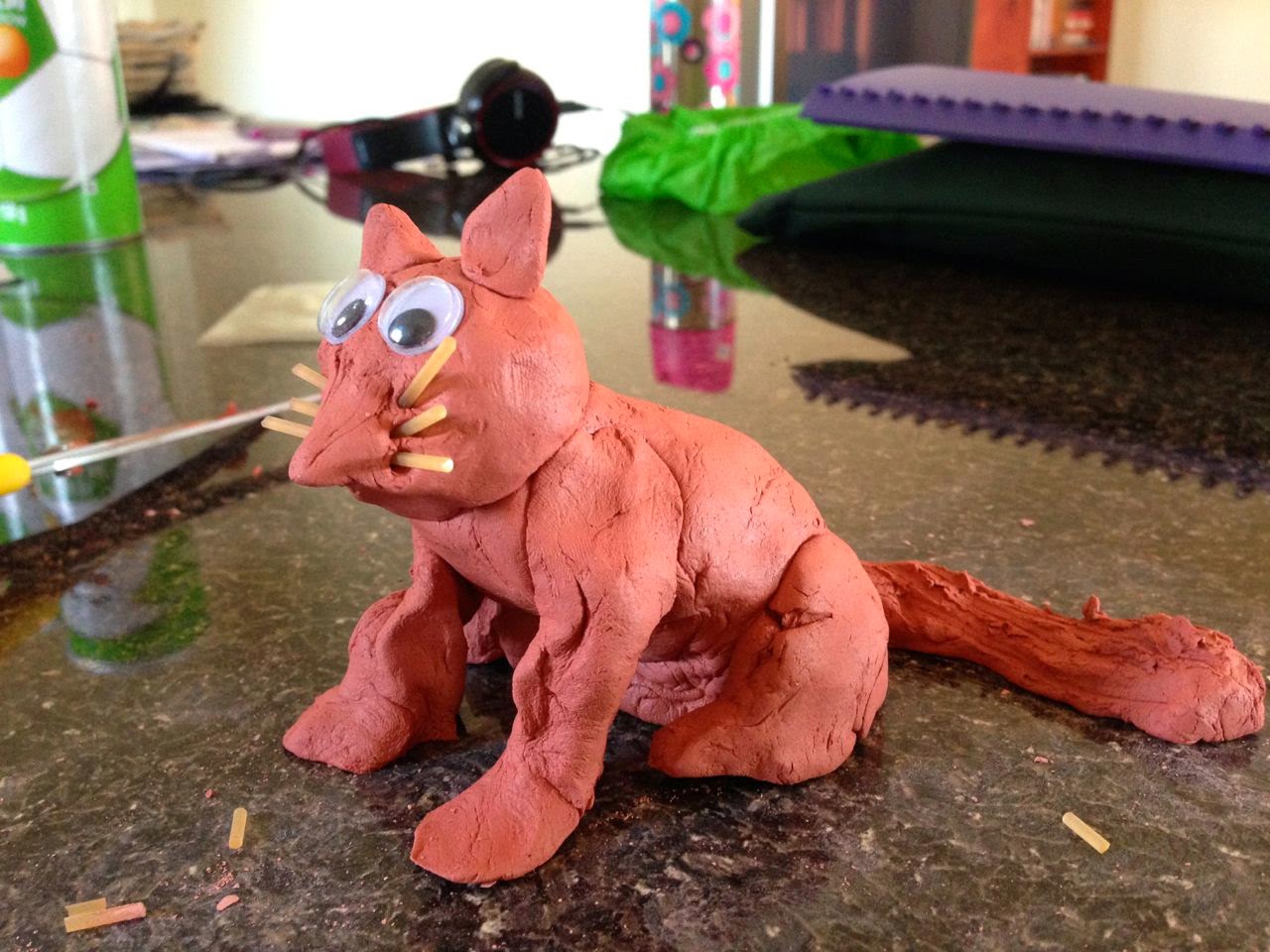 The next day we went to my sister Susie's place.  My little niece Grace was making a fox out of modelling clay for a school project.  I've never used that clay before and find 3D figures quite challenging but I still gave advice.  Grace did a great job.  Aren't the googly eyes and spaghetti whiskers cute? 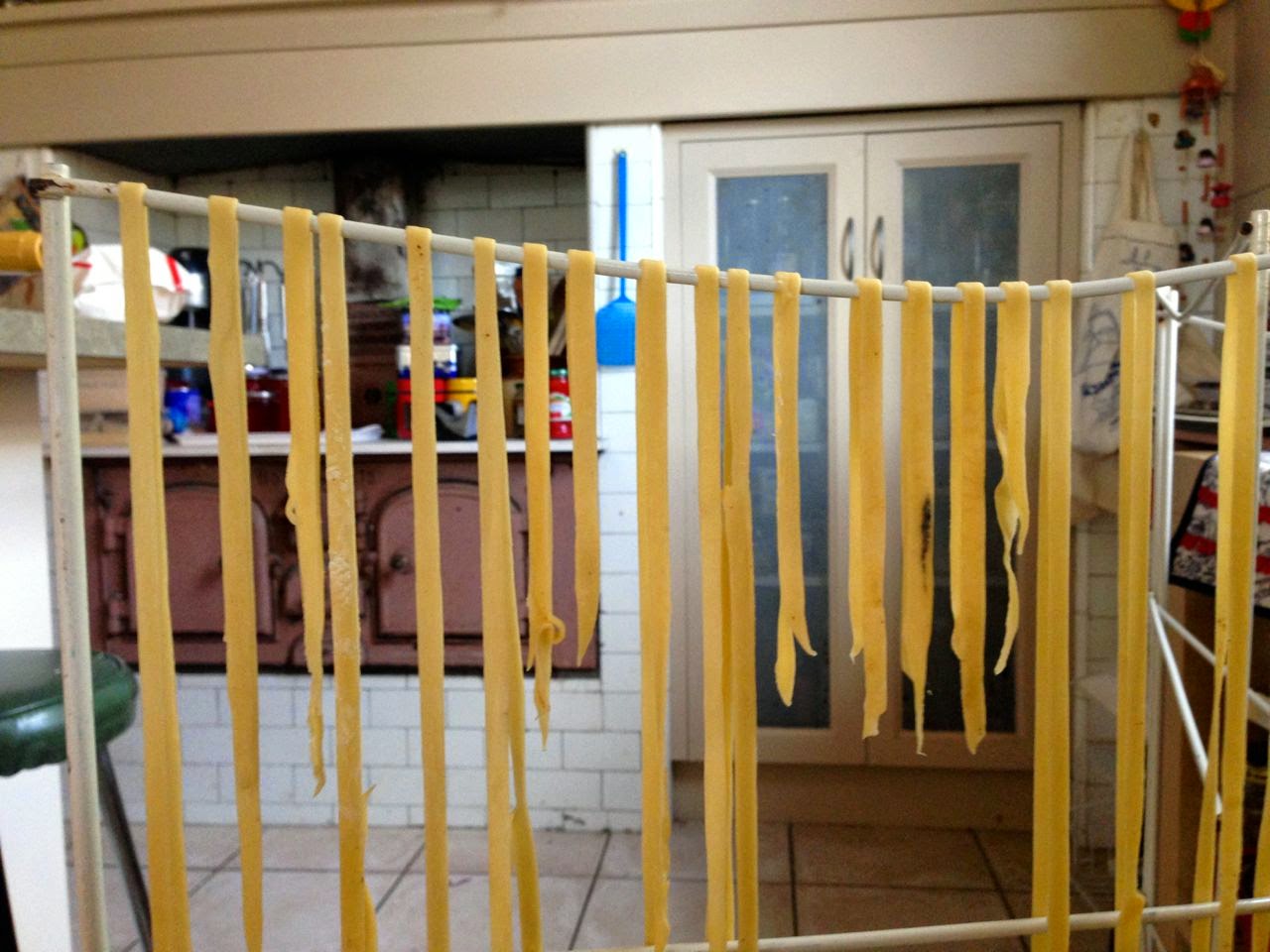 Then I went back to my mum's and helped her make pasta.  Here it is drying on a clothes rack in her kitchen.  We had a bowlful for lunch.  Fresh pasta really does taste amazing.  Sylvia was under the weather so we headed off early, stopping at another sister's place.  We had a quick cuppa with Fran and time to watch her gorgeous little toddler at play.  Then it was home to a cold house and leftovers for dinner.

As this dessert includes a reasonable serve of pumpkin, I am sending it to Michelle at Utterly Scrummy Food for Families for the Extra Veg challenge run by Michelle and Helen.

Apple and pumpkin pastries with spiced red wine
From Jan Solovic of The Empire Grill, in The Geelong Advertiser, 5 June 2014
serves 4 to 6

Meanwhile make the spiced red wine. Set aside 1 cup of red wine and then mix remaining ingredients in a small saucepan.  Simmer until reduced by half.  Cool, remove orange half and cinnamon stick. Add the cup of red wine.  Set aside until ready to serve.

To wrap the rolls, take a piece of filo pastry, spray with oil, place 2 to 3 spoonfuls in the short end with 5 cm pastry either side.  Fold in the pastry at the sides and roll up like a log.  Place filled pastries on a lined baking tray.  Spray more oil on top.  Bake at 160 C until golden brown.

Serve pastries hot with a sprinkle of icing sugar and warmed (not hot) spiced red wine.

On the Stereo:
Frozen soundtrack
Posted by Johanna GGG at 13:56