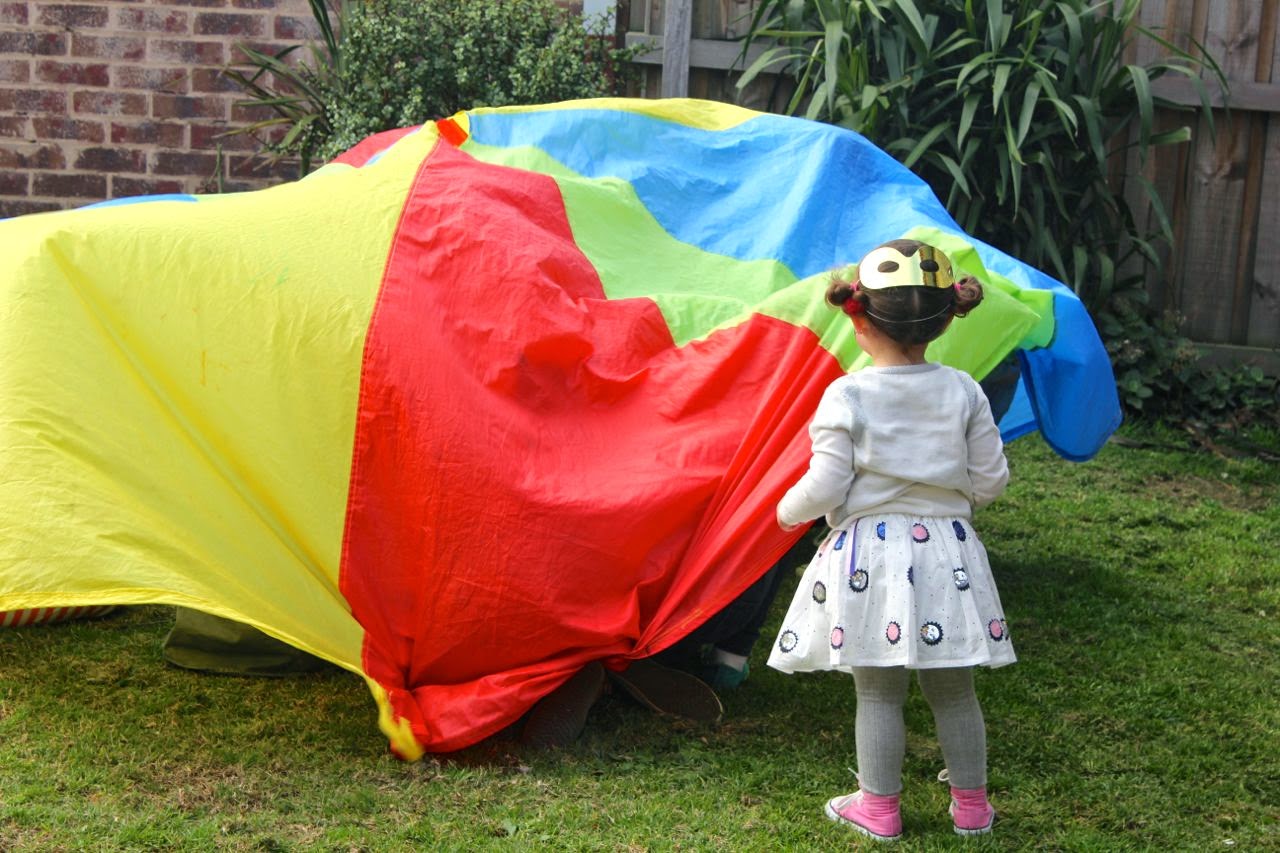 Once upon a time there was a princess.  Nope.  Not the little girl above.  That is her cousin.  The princess in question was totally spoiled with visits to farmers markets where she tasted much chocolate and apple followed by home made apple slice at home.  She made loom bands and went to parties and ate lots of cake, but always left room to taste a lolly from the party bag on the way home.

Yes that is my little Sylvia and my busy weekend!  As Vegan MoFo draws near, I am trying to keep my blog backlog under control.  Hence this action-packed and recipe-packed post! 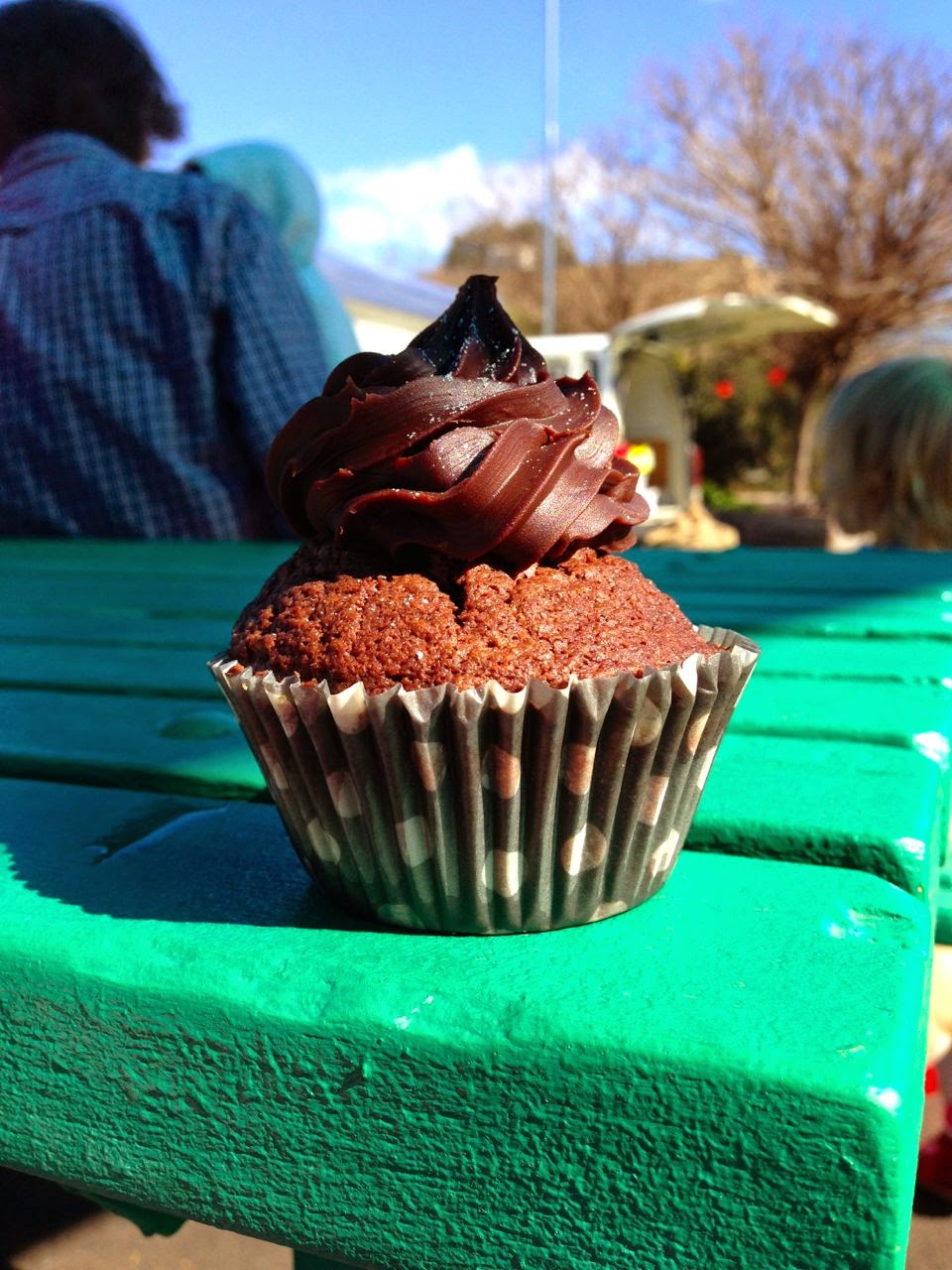 Saturday morning we went along to Coburg Farmers Market.  It was very good and I ended up with my arms heavy with purchases.  Some purchases never got home.  Some of the apple juice just leaked out of my bag, a bagel went astray and the above chocolate cake was shared by Sylvia and me.  We had planned to go out for lunch but couldn't find the information we needed about the cafe (do you serve food?).  Instead, at home I stuffed bagels with haloumi and salad for lunch.  Then I baked apple slice. 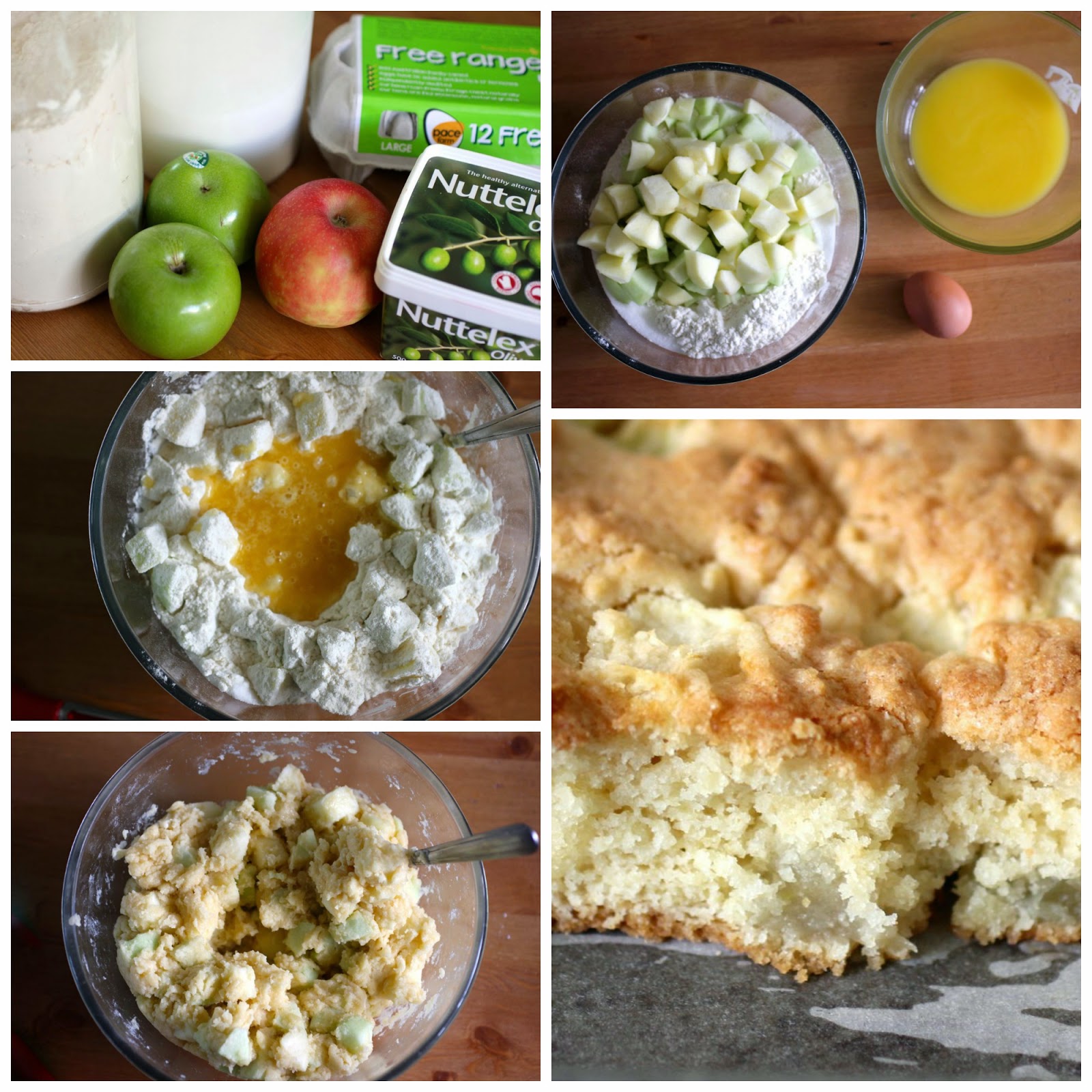 I saw this apple slice recipe recently at The Life of Clare.  Not only was it a simple matter of a mere 5 ingredients but it came with a wonderful story.  Clare's grandmother sent it to the newspaper years ago and readers are still baking it.  I love all the quirky and innovative recipes I see online these days but there is something so lovely about a tried and trusted recipe.  It reminds me of how my mum and grandmothers baked. 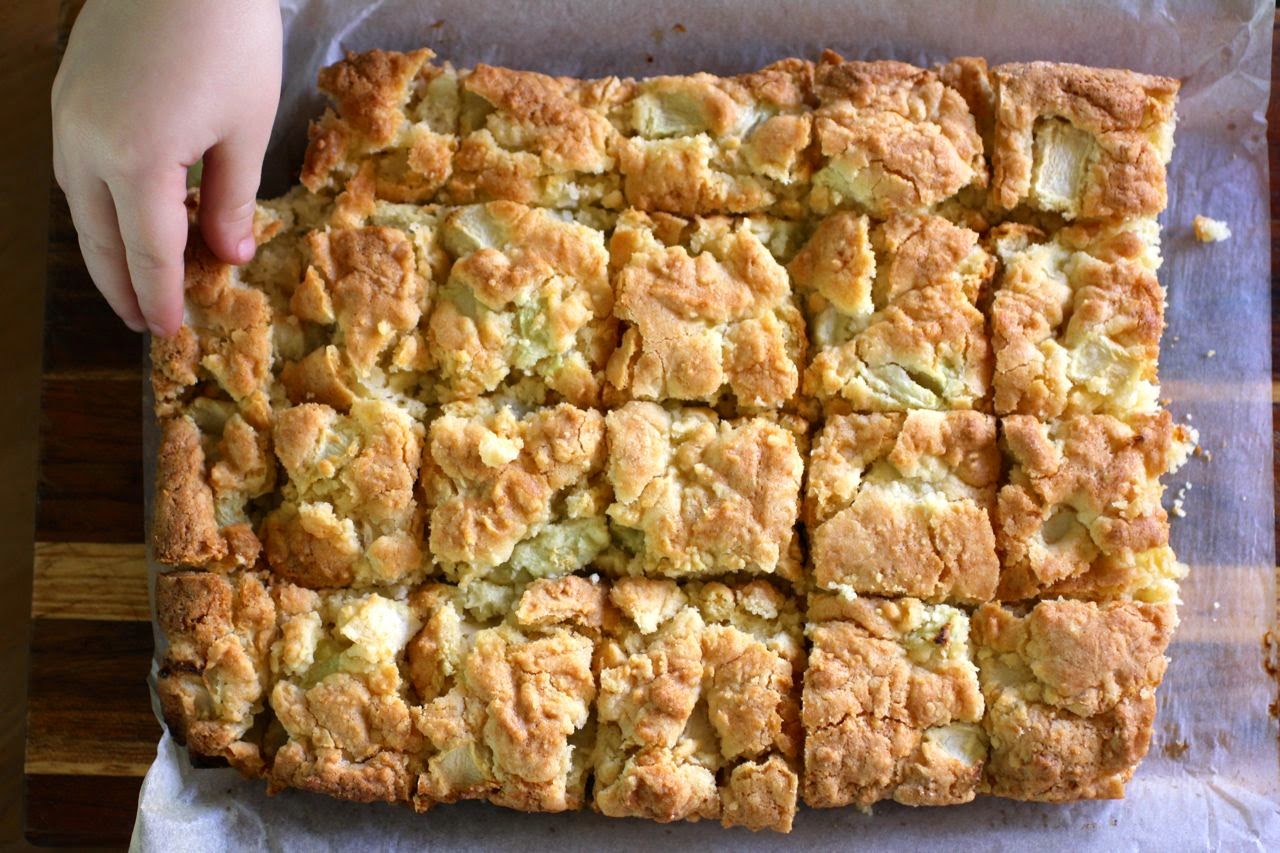 As I expected, my mum said she had a similar cake recipe.  I gave her the recipe over the phone and she had baked it before the day was out.  She added cinnamon and a splash of milk.  I resisted any temptation to tinker with the recipe.  I would love to try it with coconut sugar.  You could just add other spices or dried fruit.

I really loved this slice as it was.  It is almost a cake. On the day of baking it was so light and fluffy with soft apple that it felt like a cake.  The next couple of days it was a bit firmer and felt more like a slice.  It was so easy I am sure I will make it again, especially now that apples are starting to get past their best for eating fresh as winter draws to a close. 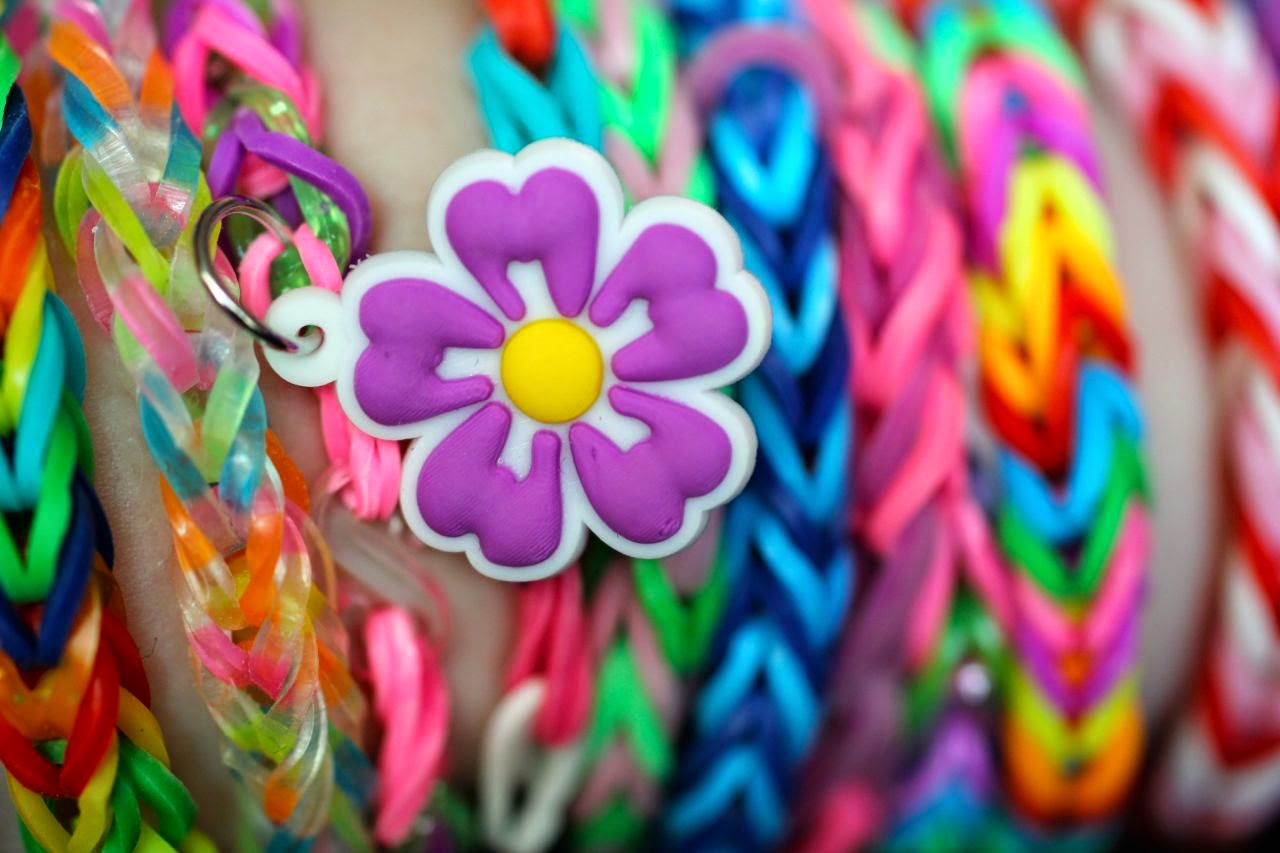 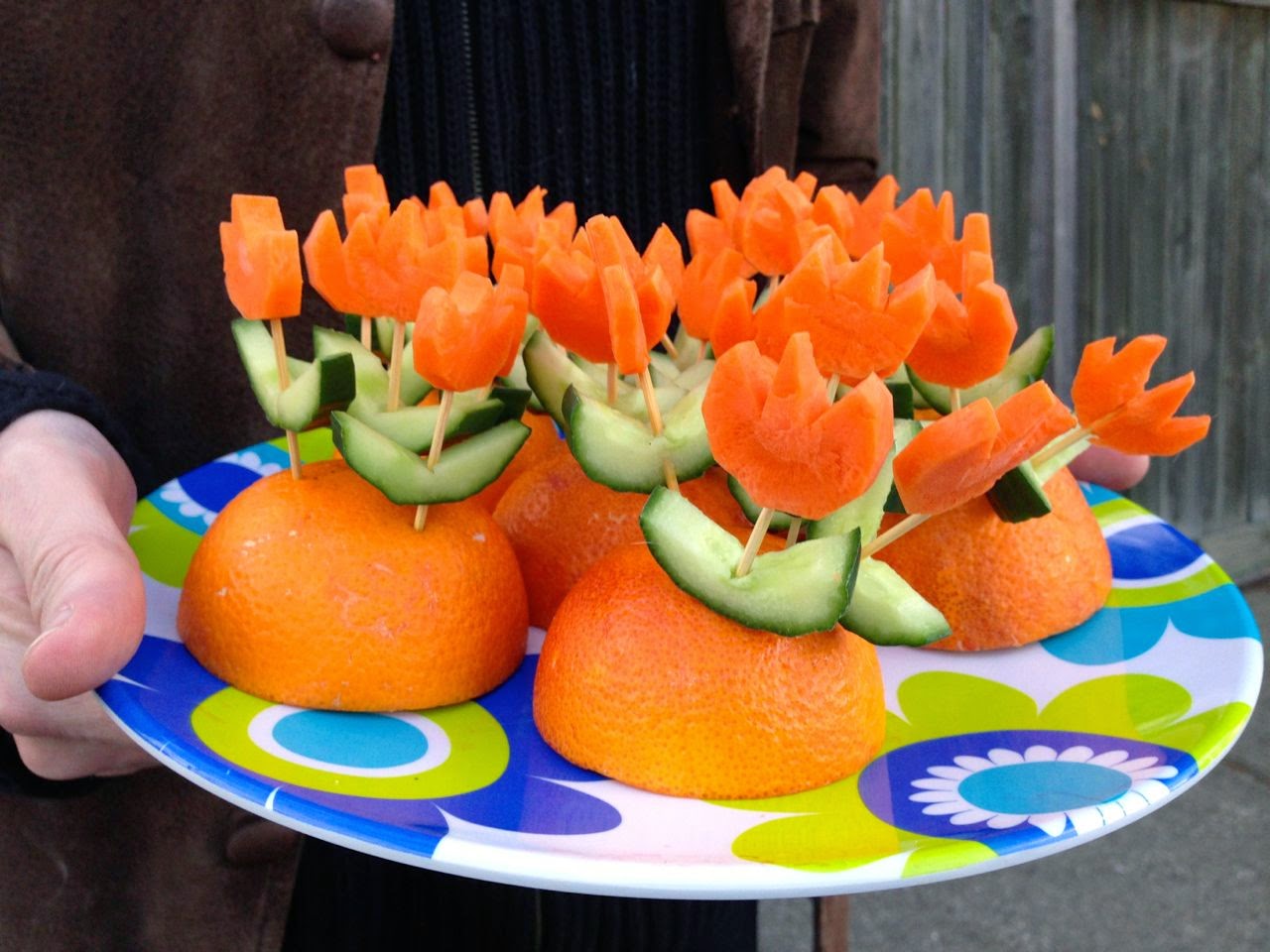 Sylvia went to a school friend's party in the evening.  I suggested making some carrot and cucumber tulips.  Sylvia thought it a great idea.  They are quick and simple to make.  By the time we arrived pizza was being served.  I think more people admired the vegie flowers than ate them, but they did make a pretty decoration. 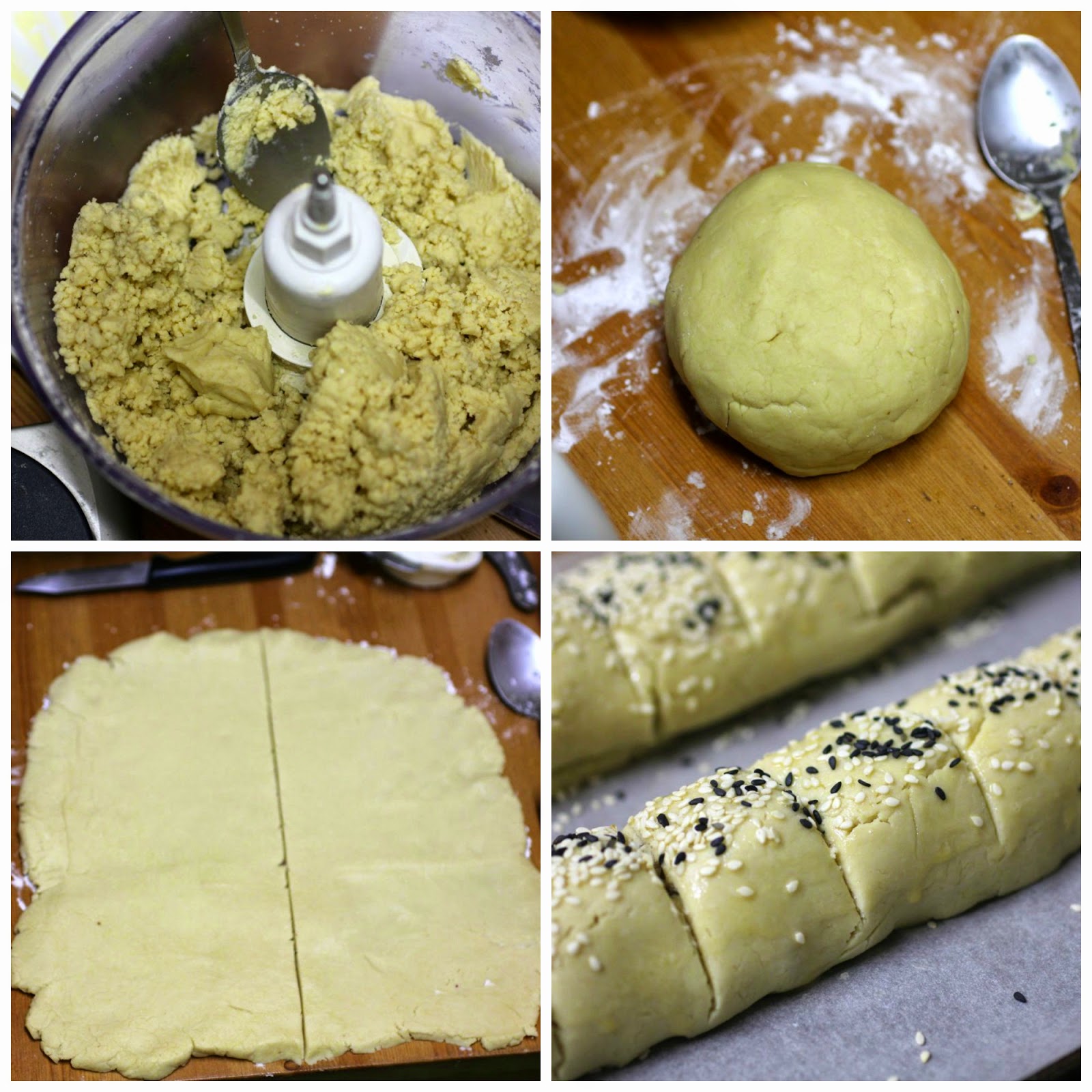 We left Sylvia at the party on a torchlit treasure hunt by the creek.  I returned home to make sausage rolls for my niece's party the next day.  It seemed a good idea to make some gluten free sausage rolls for the gf members of the family.  I had scribbled down a gf pastry recipe years ago and suddenly found myself with all the ingredients.  It was fate.  I liked the pastry.  It was so much nicer than the soft gf mashed potato pastry I made a few years back.  I am just sorry I never recorded the source. 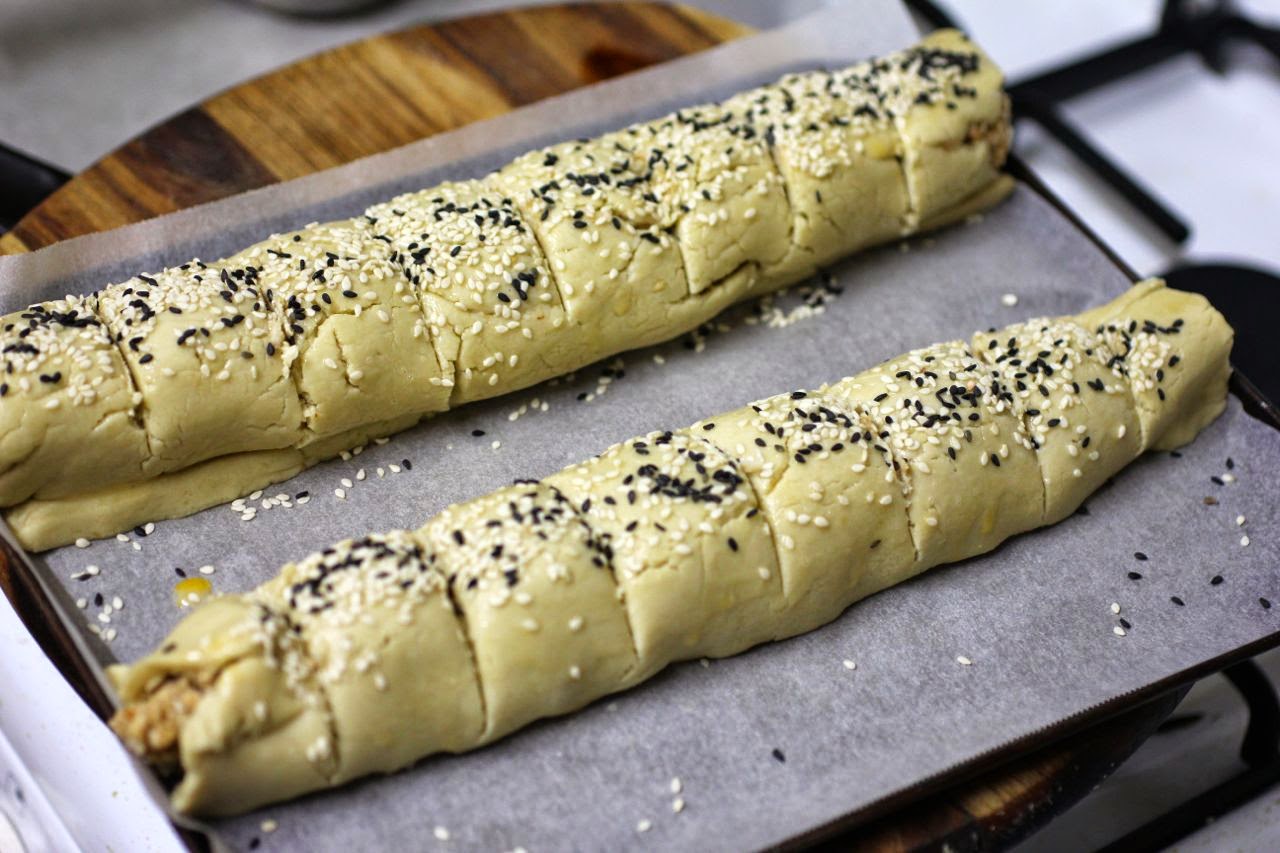 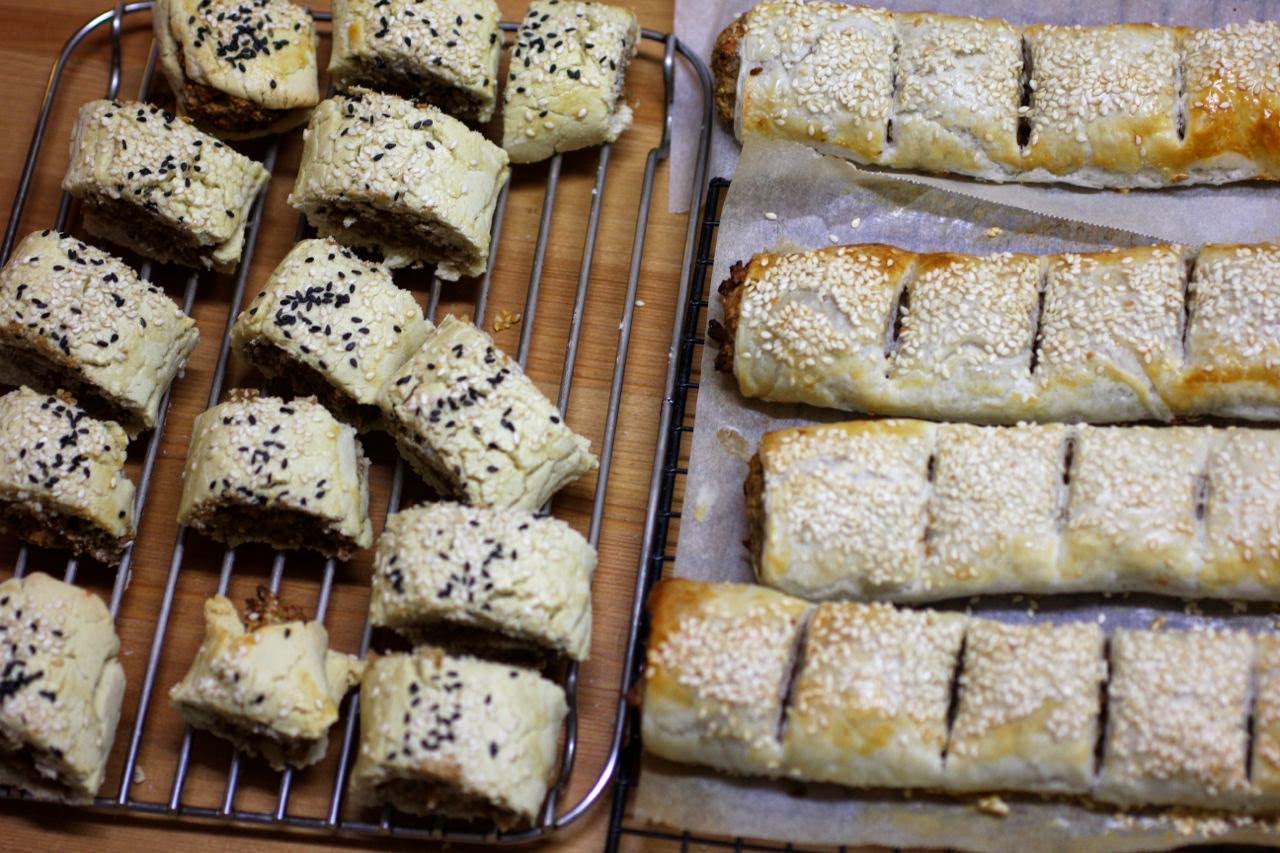 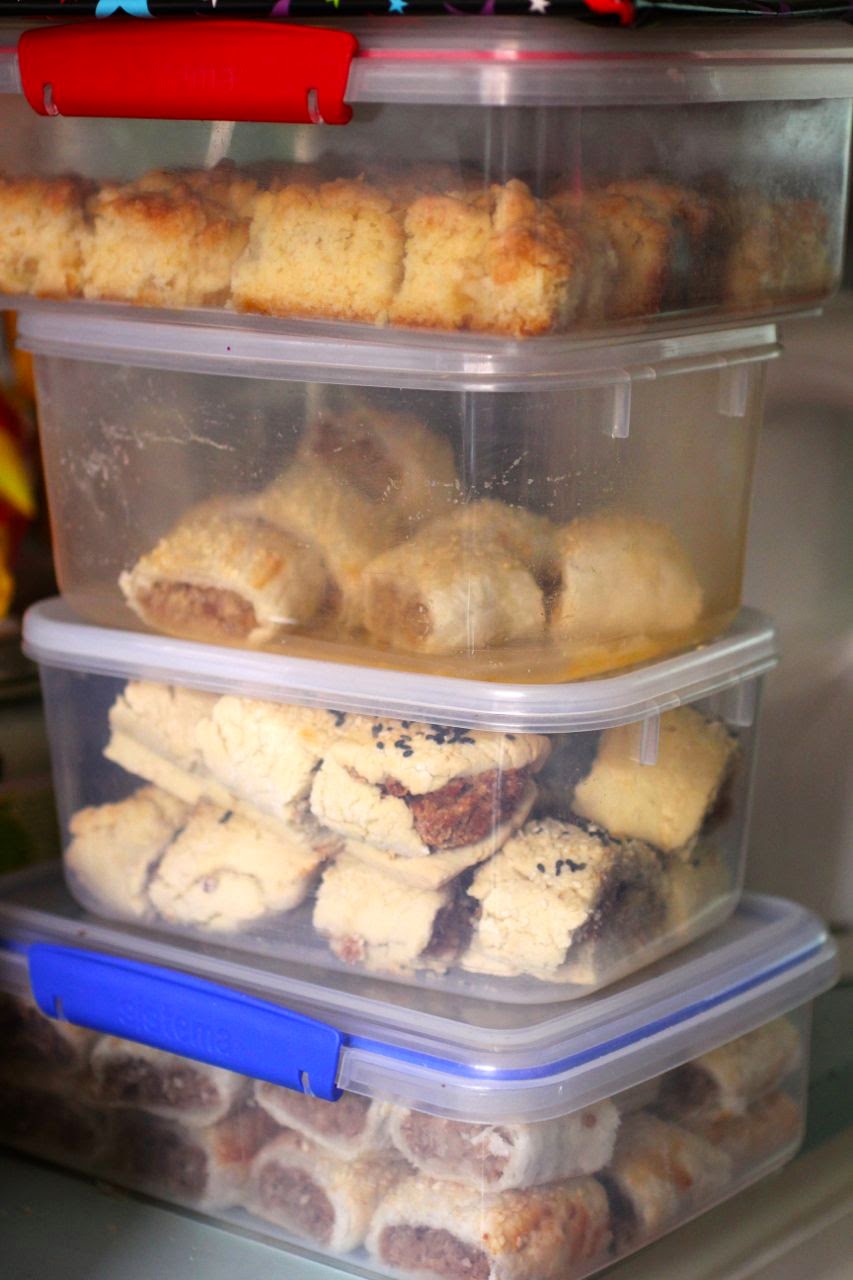 Here is the baking stack in the kitchen the next morning.  We went to my parents' house for lunch and helped out with decorating little cakes and making popcorn.  My mum makes it in a saucepan with a glass lid which was heaps of fun for Sylvia.  She made some with salt and some with sugar, using a bit of pink food colouring in the butter for the sweet popcorn.  No photos.  My hands were too greasy from tossing popcorn with butter to pick up the camera.  My mum also made kale chips.  Quite an impressive snack for a 2 year old's party. 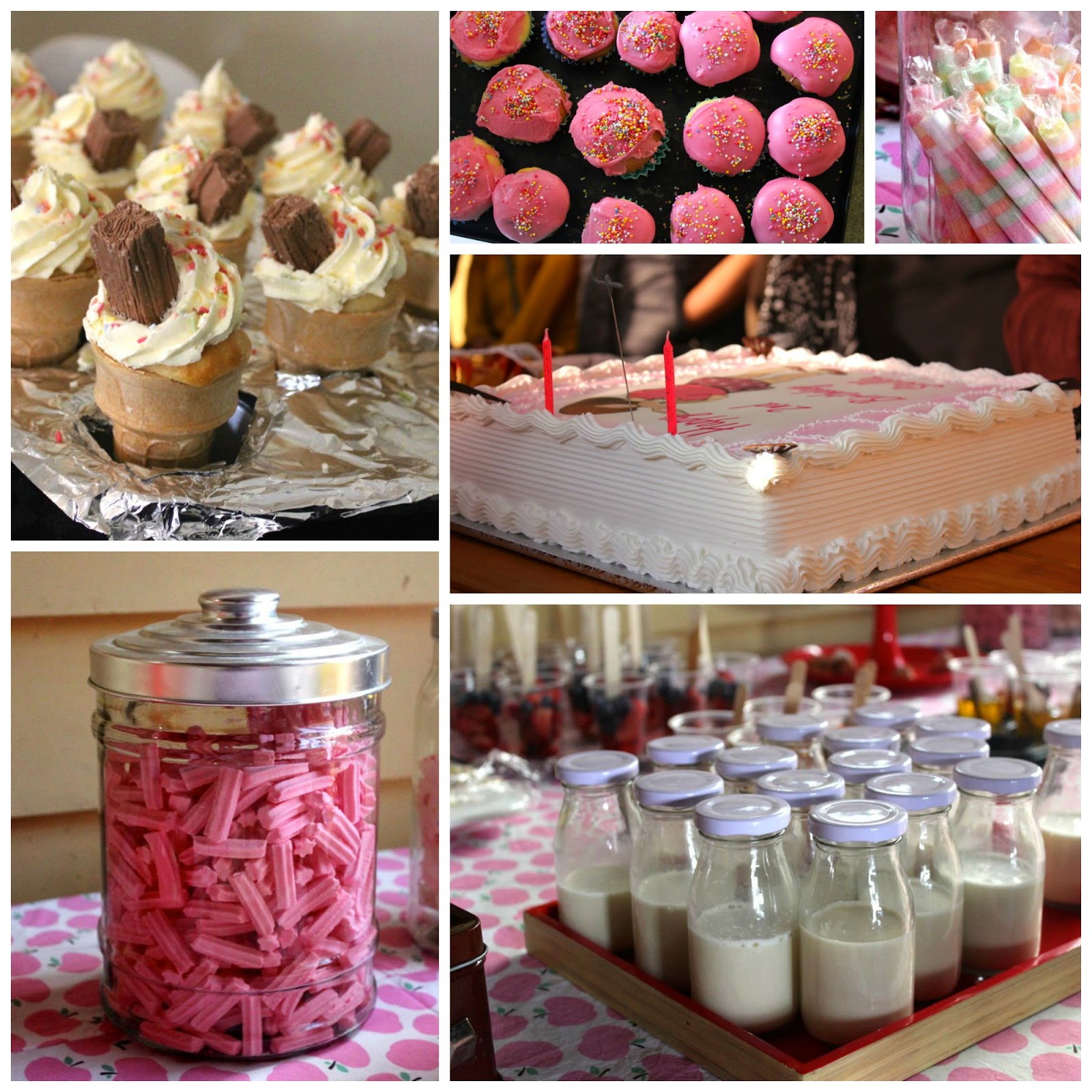 My sister Fran loves planning an event and always has such great party ideas.  She hired the best party entertainment.  They did face painting, craft, games, balloons.  The kids loved it.  The birthday girl was right in among it at the tender age of 2.  I loved the strawberry and caramel milkshakes in little bottles.  Sylvia loved them and the frog in a pond and the musk sticks.  I also loved the caramel chocolate tarts and pastitsi.

My sister in law Erica baked the cutest ice cream cupcakes.  Sylvia told me in confusion that they didn't take like ice cream.  She also thought she had an S-shaped cookies in her party bag because everyone had their initial-shaped cookie.  I didn't have the heart to tell her it was S for Stella.  Oh the world revolves around a 5 year old! 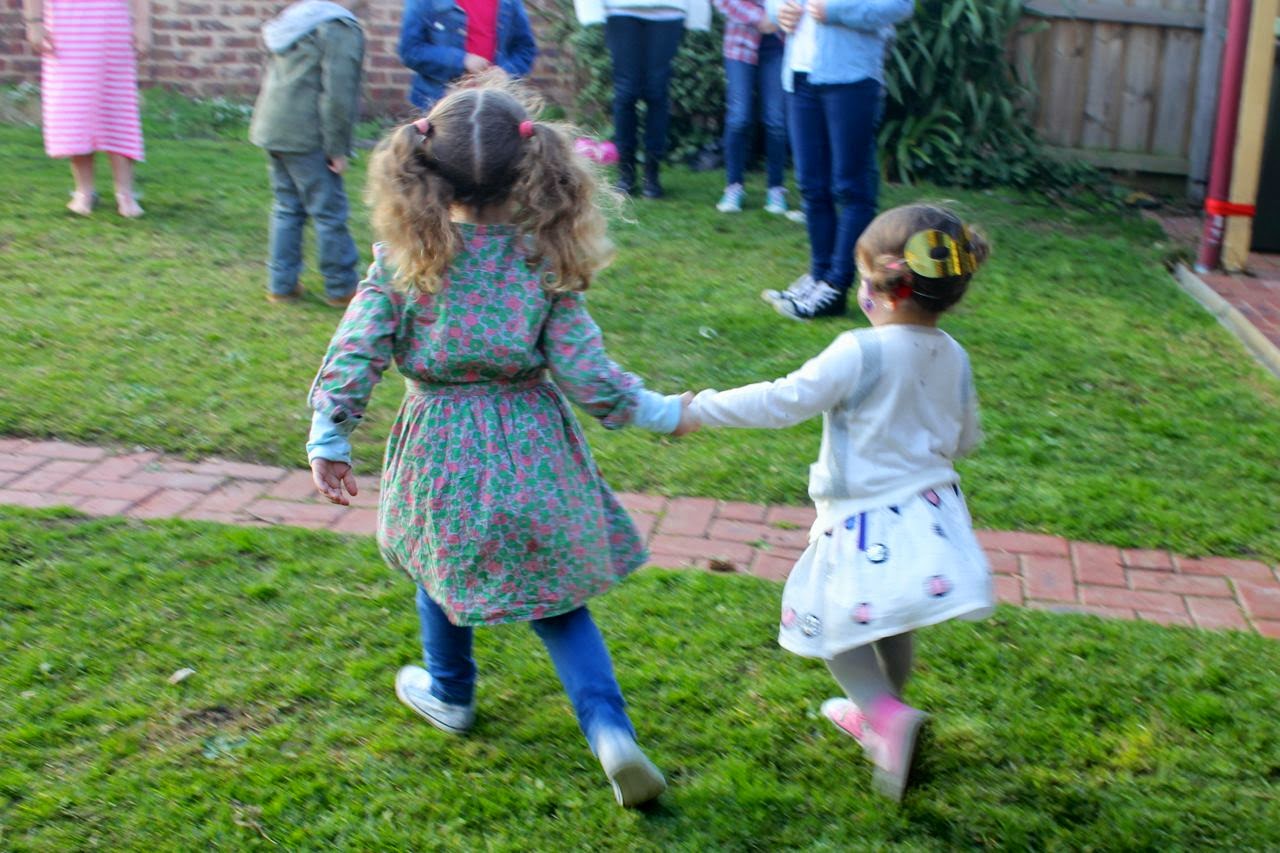 There was a huge outdoor table which was great place for kids to colour in bandanas and eat the birthday cake.  Sadly the good weather didn't hold up for the party.  It was grey and overcast with occasional showers (as the weather forecasters like to say)! 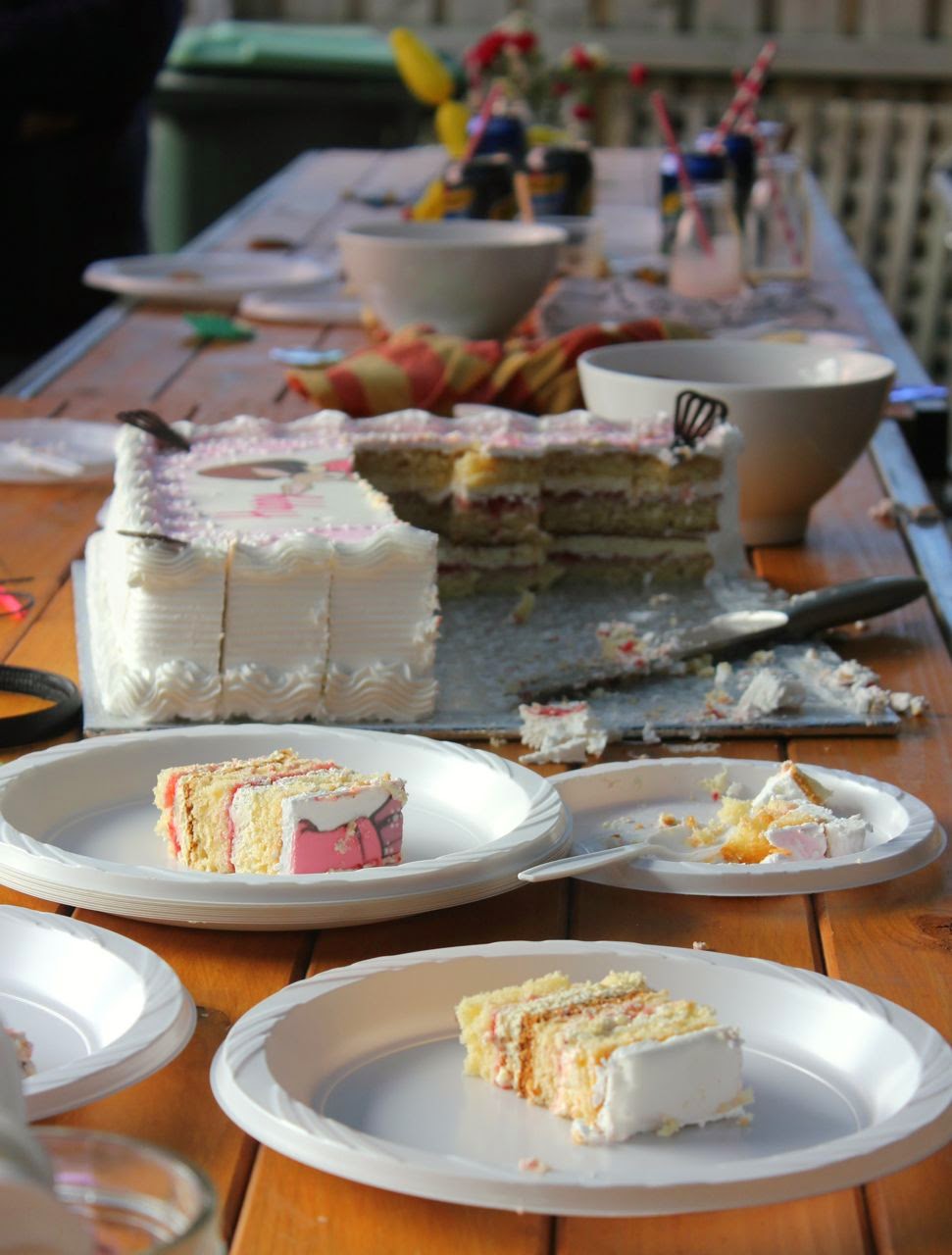 I had a paranoid moment eating one of my sausage rolls and thinking maybe I had mistakenly eaten a meat one.  I wasn't the only one.  My brother and his wife were arguing over whether they were really meat or not.  These are amazing sausage rolls.  I was comforted to hear that mine were the only sausage rolls at the party. 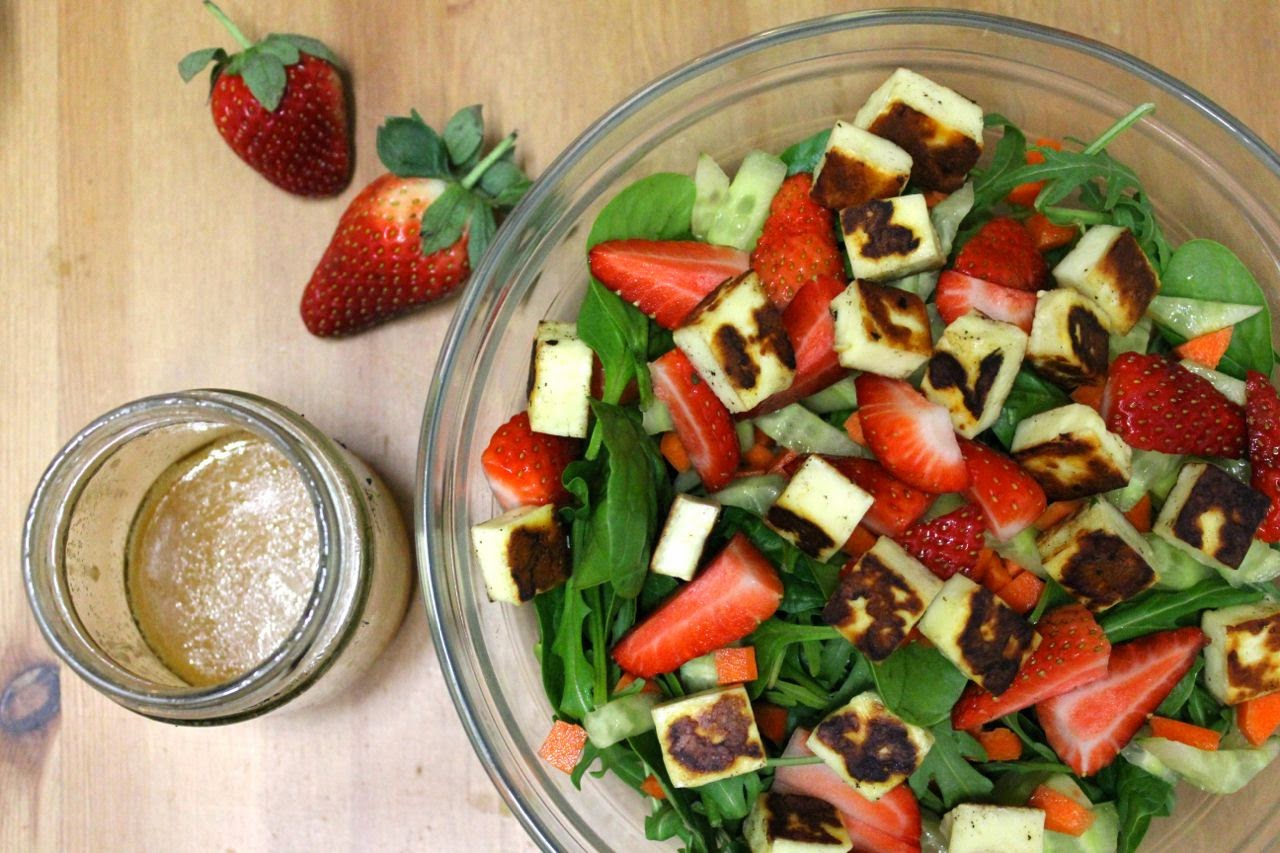 By the time I drove home I was exhausted.   Fortunately I had planned my dinner before I left home.  It was just a matter of throwing together the remnants from the vegie tulips, some spinach and strawberries that needed using and frying the rest of the haloumi I opened for lunch the previous day.  I made a simple vinaigrette.  A fresh and healthy salad was just what I needed. 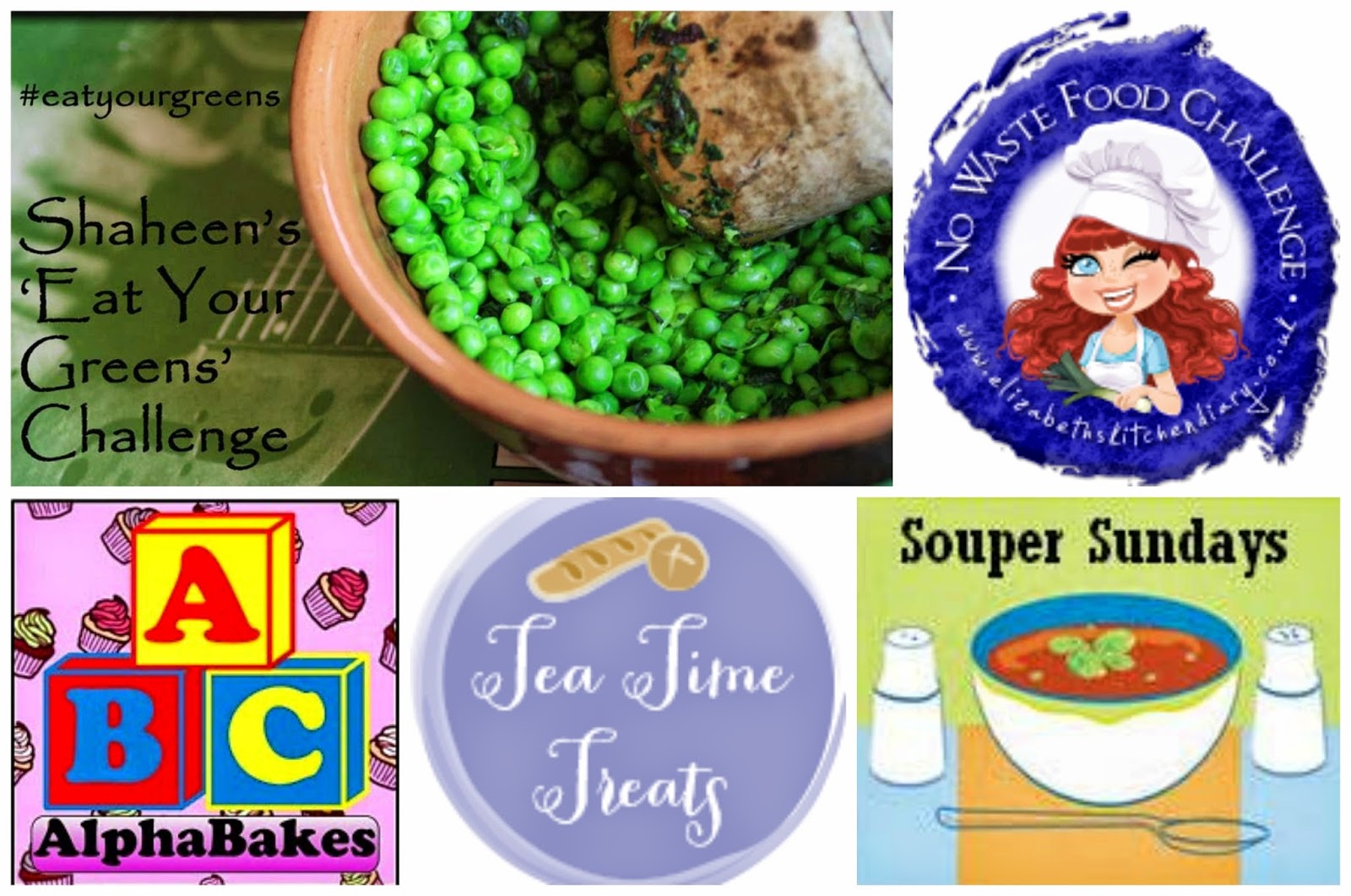 I am sending the salad to Eat Your Greens at Allotment to Kitchen, Souper Sundays at Kahakai Kitchen, and No Waste Food Challenge at I'd Much Rather Bake Than... , the challenge coordinated by Elizabeth's Kitchen Diary.  I am sending the apple slice to Tea Time Treats for the picnic edition at Lavender and Lovage.  I am sending the gf pastry to Alphabakes at Caroline Bakes because P is for potato flour.

Apple Slice
From The Life of Clare

Toss apples with self raising flour and sugar in a medium mixing bowl.  Melt butter in a small saucepan on the stovetop or in a small bowl in the microwave.  Stir in egg.  Pour butter and egg into the apple mixture and mix until combined.  Spoon into a greased and lined slice tin*.  Bake at 180 C* for 35 to 40 minutes or until the top is golden brown and a skewer inserted into the middle comes out clean.  Keeps for about 3 days.

*NOTES: For Americans: instead of self raising flour, used 2 cups all purpose flour (or cake flour if you prefer) and 4 tsp baking powder, 125g butter converts to slightly under a stick or 4 ounces of butter, bake at 350 F.  A slice tin is 18 x 28cm or approximately 8 x 11 inches.

Mix flours, butter and salt in food processor until combined to make breadcrumbs.  Add egg and then water one tablespoon at a time until you have a soft dough.  Mine did not clump into a ball like gluten pastry does but I was able to roll a small handful into a ball.  Tip dough onto floured surface (use corn flour or potato flour) and knead briefly until you have a smooth ball.  (Perhaps a small crack or two.)

To make sausage rolls: Use a rolling pin to roll out pastry on a floured surface to make an approximation of a rectangular shape, about 0.5 cm thick.  Cut in half lengthwise.  Use the filling from this sausage rolls recipe but use GF oats and GF breadcrumbs (I had to add an extra 1/4 cup breadcrumbs and 1/2 cup oats for the GF filling).  Proceed as in recipe but bake for 35 minutes at 180 C.  The pastry only made enough to wrap about

Strawberry, haloumi and greens salad
serves 1 as a meal

On the stereo:
Boy child: Scott Walker
Posted by Johanna GGG at 23:31