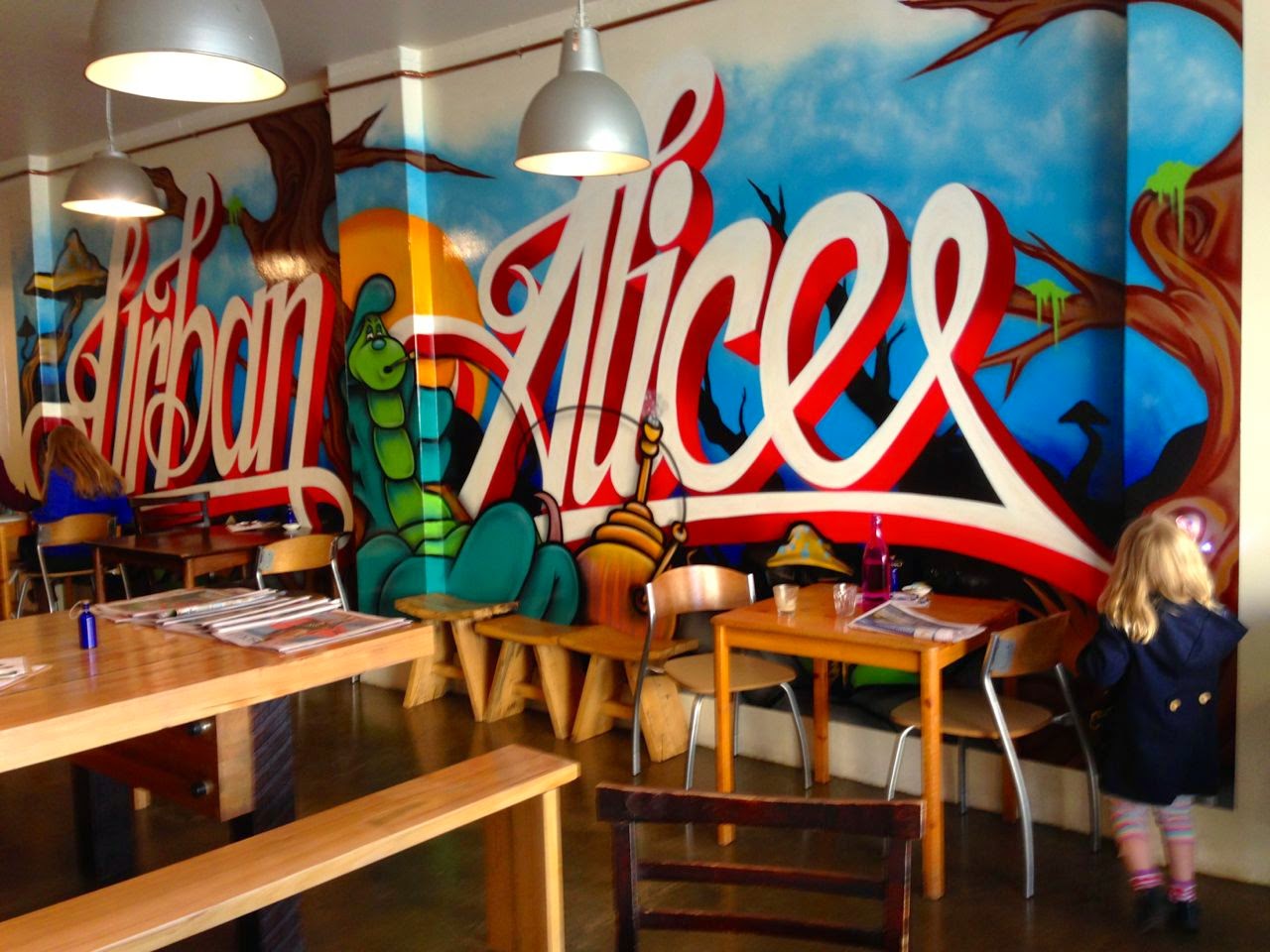 This cafe has now closed

E loves a record store.  That was the reason we headed to Northcote a few weeks ago.  Once there, it was an opportunity to try out a new cafe.  E had spotted Urban Alice during the ukelele festival.  As Loving Hut was not open for lunch at that time, I agreed to try it.  The menu didn't enthuse me but I loved the welcoming interior.  By the time we left, I felt very warmly towards the cafe that treated us so well. 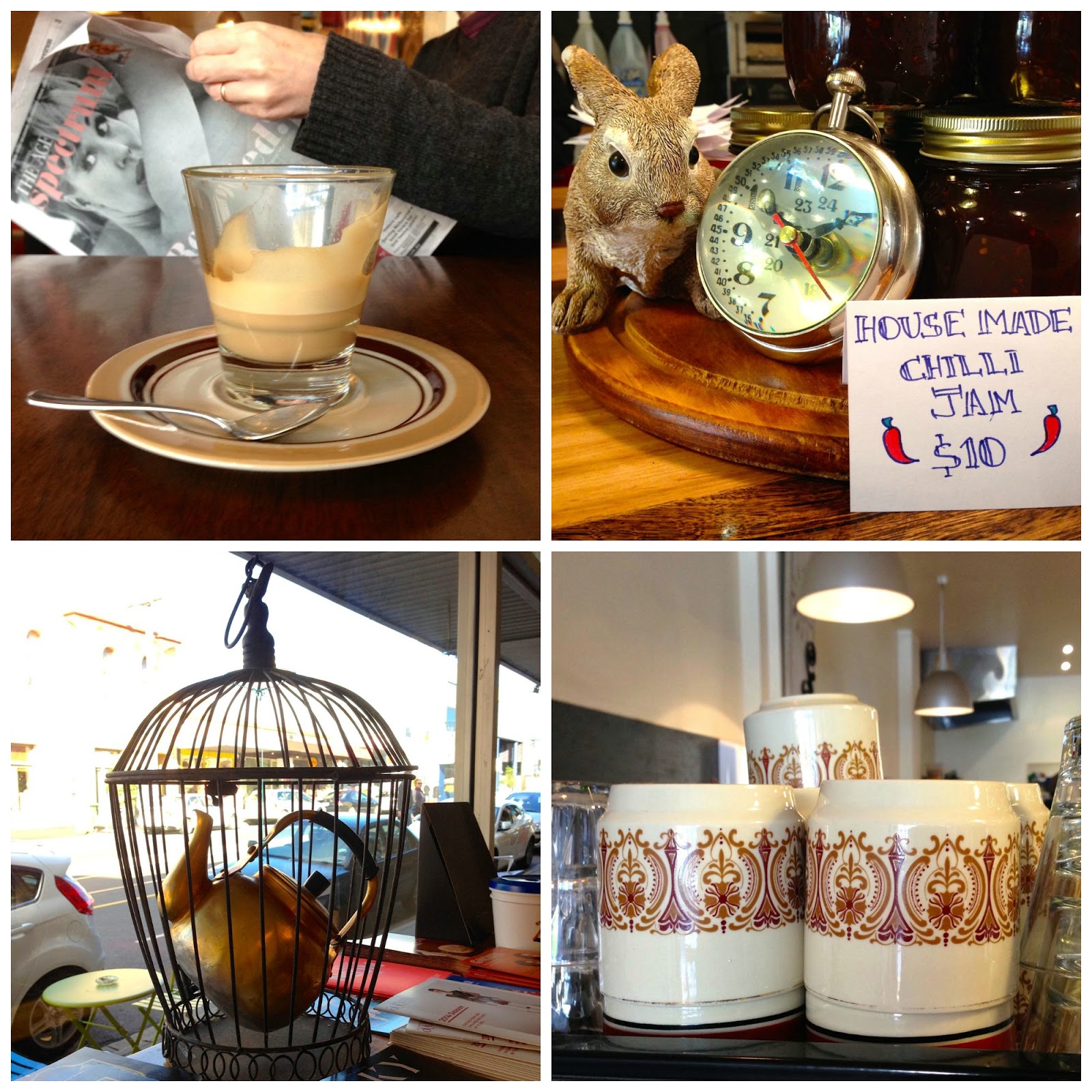 I really liked all the quirky touches in the cafe.   One wall is covered with a colourful Urban Alice mural (top photo).  A few touches are reminiscent of Alice in Wonderland: an oversized top hat on a wall, a surreal teapot in a cage and a rabbit beside a fob watch.  I also loved the retro crockery, especially the mugs. 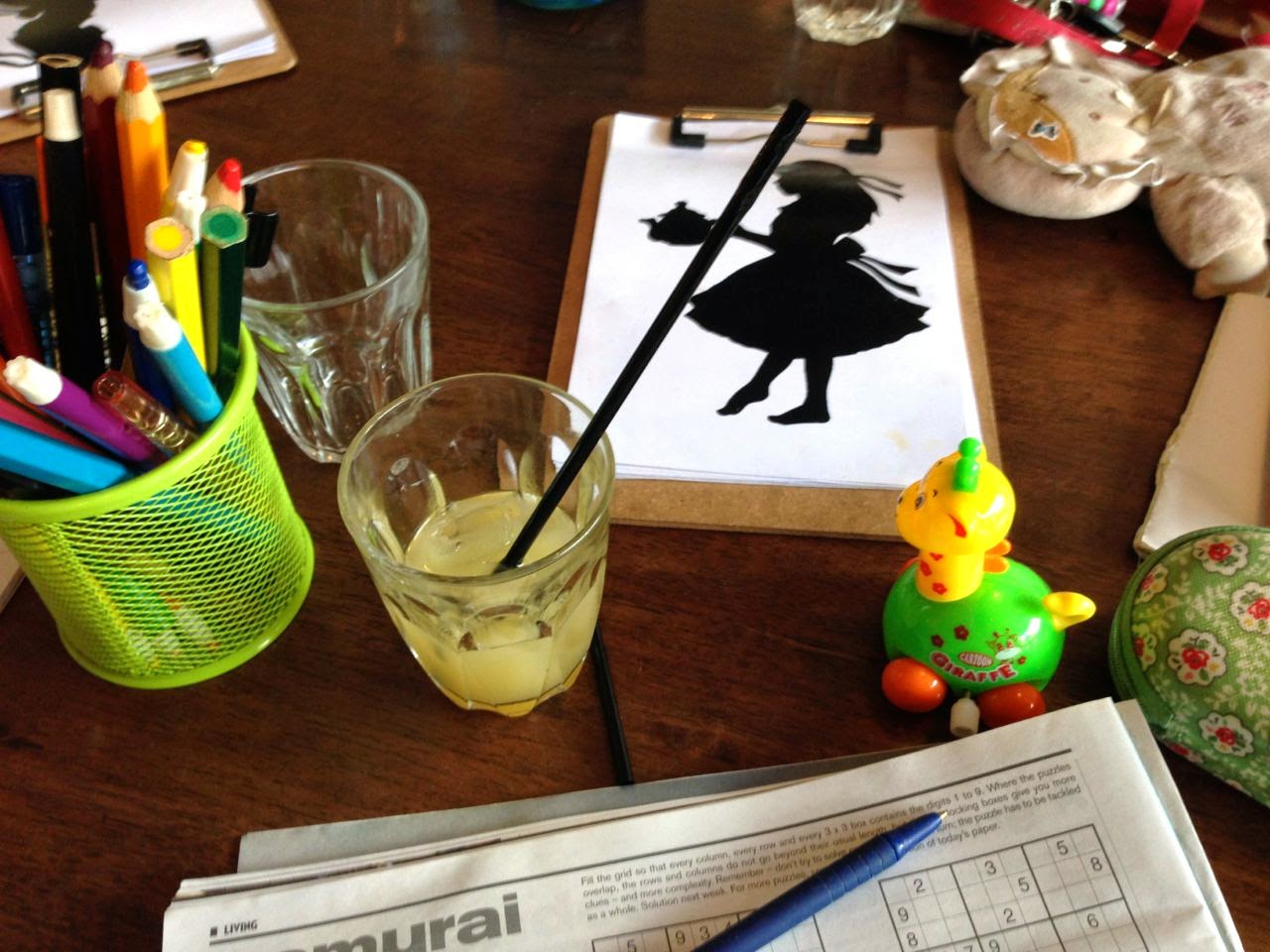 E had a latte and Sylvia had apple juice.  While we waited for our food, I did some sudoku.  It was really nice that the waitress brought over some pens and paper for Sylvia.  For her lunch, we chose cheese on toast.  E instantly decided he would have the Alice Bagel - egg and bacon on a bagel with chilli jam.

I showed my hand as a fussy eater when ordering.  Being a vegetarian who doesn't like eggs is always hard with a breakfast menu.  It is all eggs and meat.  Or the same old soup, sandwich and avocado on toast.  So I asked if I could make some changes to the corn cakes with poached eggs, salmon, spinach, tomato and chilli jam.  The waitress said it would be easier if I spoke directly to the chef.  I was so impressed.  He came out and was really helpful in suggesting substitutions.  I had haloumi instead of eggs, and mushrooms instead of salmon. 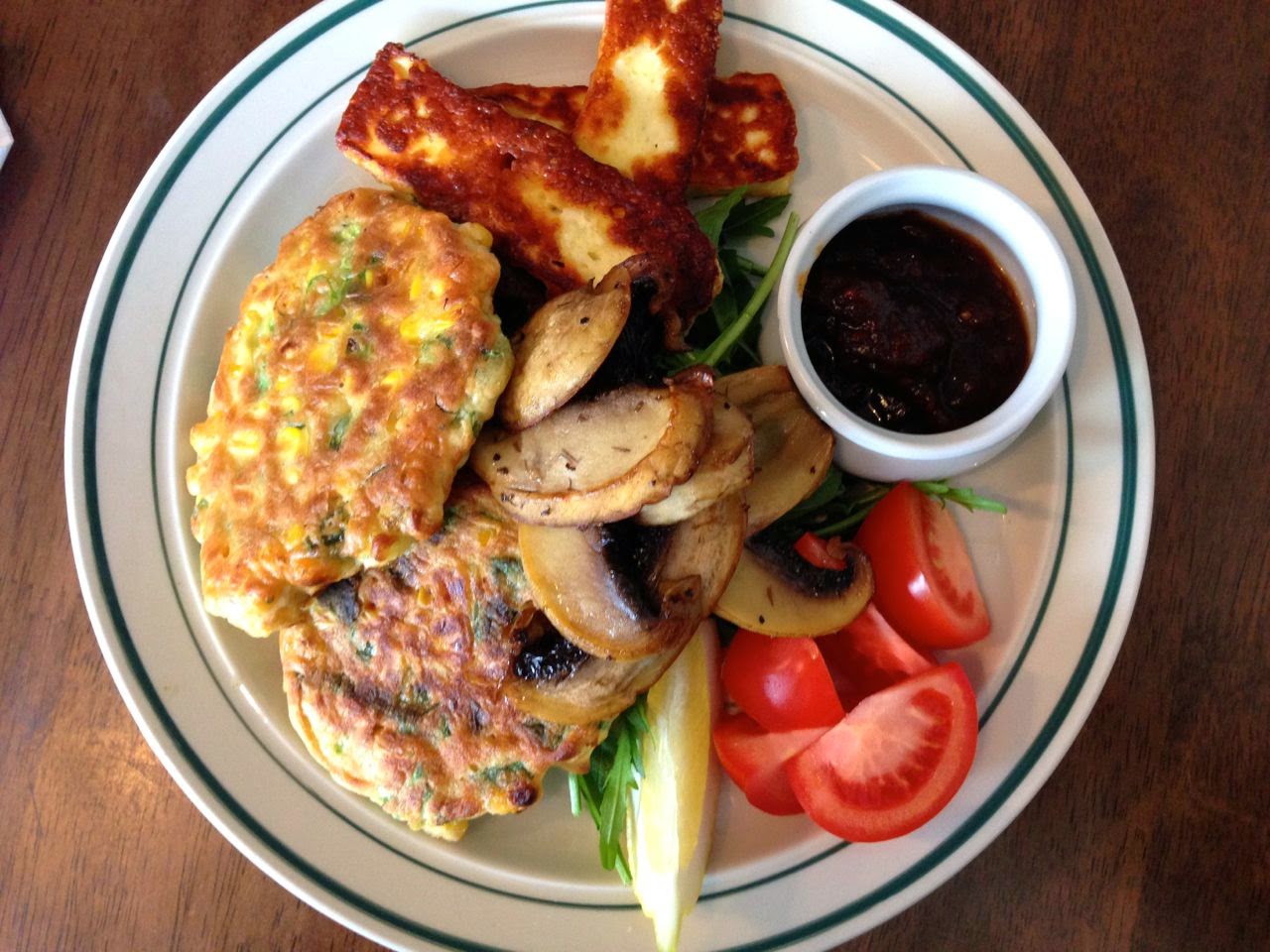 If this meal had been on the menu, I would have jumped at the chance to try it.  As it was served with such kindness, I really loved it.  My meal was piping hot.  The haloumi was golden brown and squeaked on my teeth in a pleasing way.  The corn cakes were  soft and tasty.  I am not a huge fan of mushrooms but they were lovely.  And the chilli jam added a lovely flavour without burning the top of my mouth. 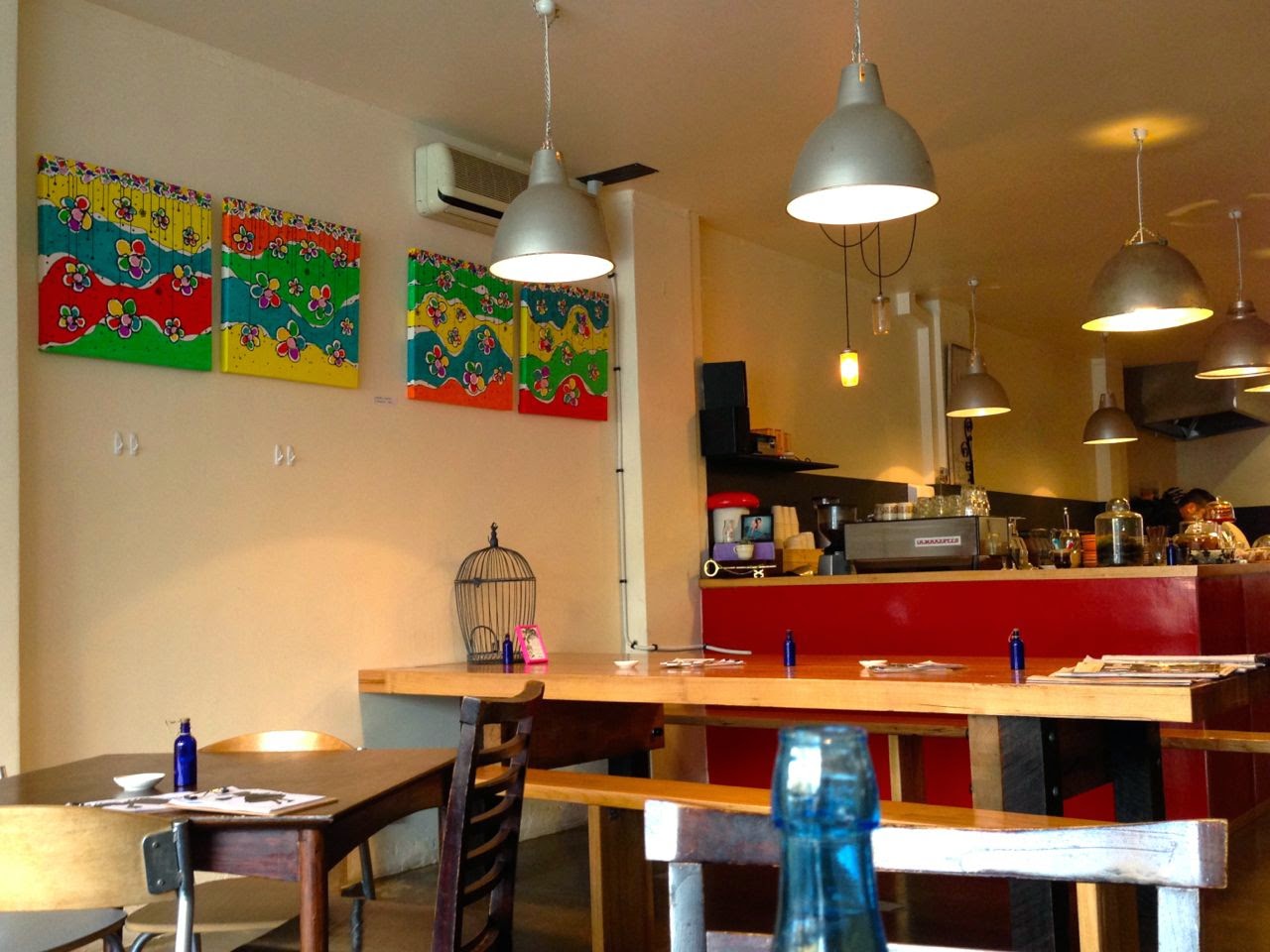 My meal was so huge that I couldn't finish it.  E loved his bagel and helped to mop up my remains and some of sylvia's cheese on toast.  We left feeling very satisfied.  Not only was the food delicious, but the service was thoughtful and helpful.

This cafe has now closed