Revisting rhubarb and raspberry focaccia and the weekend 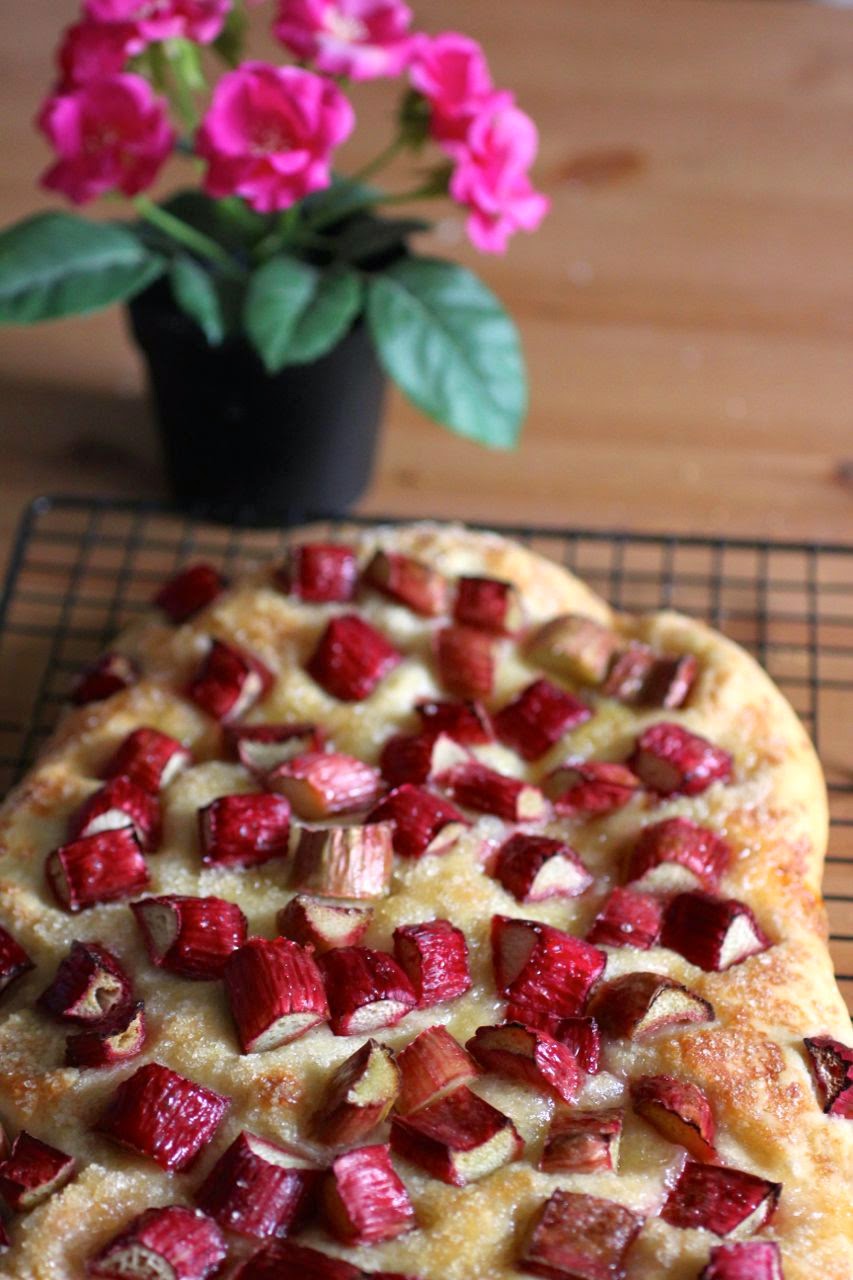 I had good intentions of making sourdough bread on Friday but the day passed me by.  Not only did it mean no fresh bread, but it also meant my sourdough starter was begging to be used.  So I did the next best thing.  An overnight foccaccia that would be ready in the morning and use up some of my sourdough starter. 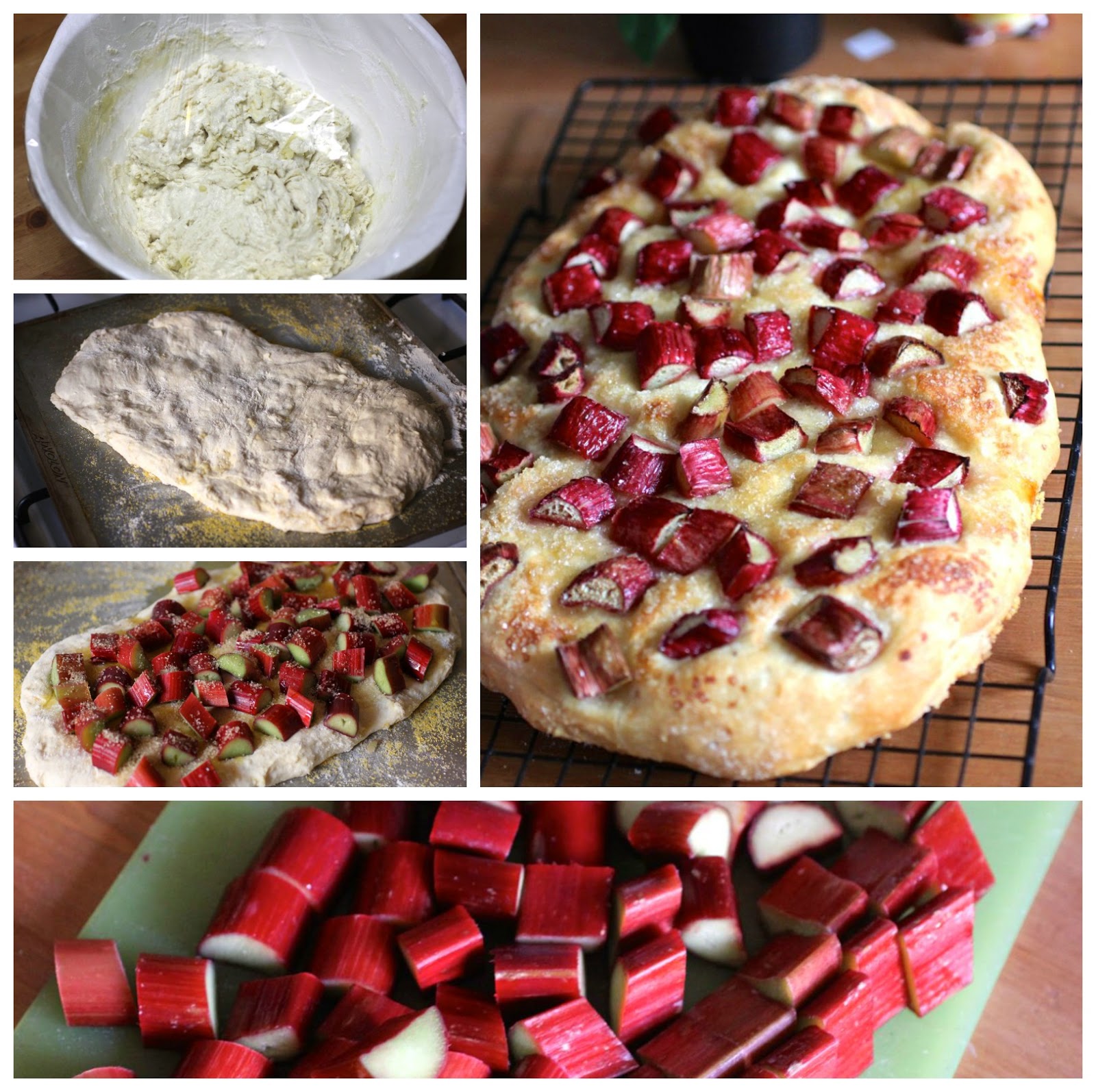 It seemed a good idea to convert a tried and trusted rhubarb and raspberry focaccia into a sourdough recipe.  Not that I intended to do away with the yeast.  I wanted enough yeast to make it rise fast and enough sourdough to give flavour.

I spent a good half hour trying to calculate how much water and flour were in my starter in cups and converting into the recipe.  Then I threw together the dough and reread the recipe.  Seems I'd got my amounts mightily confused and misread.  I managed to use 500g flour rather than 800g.  Oops. 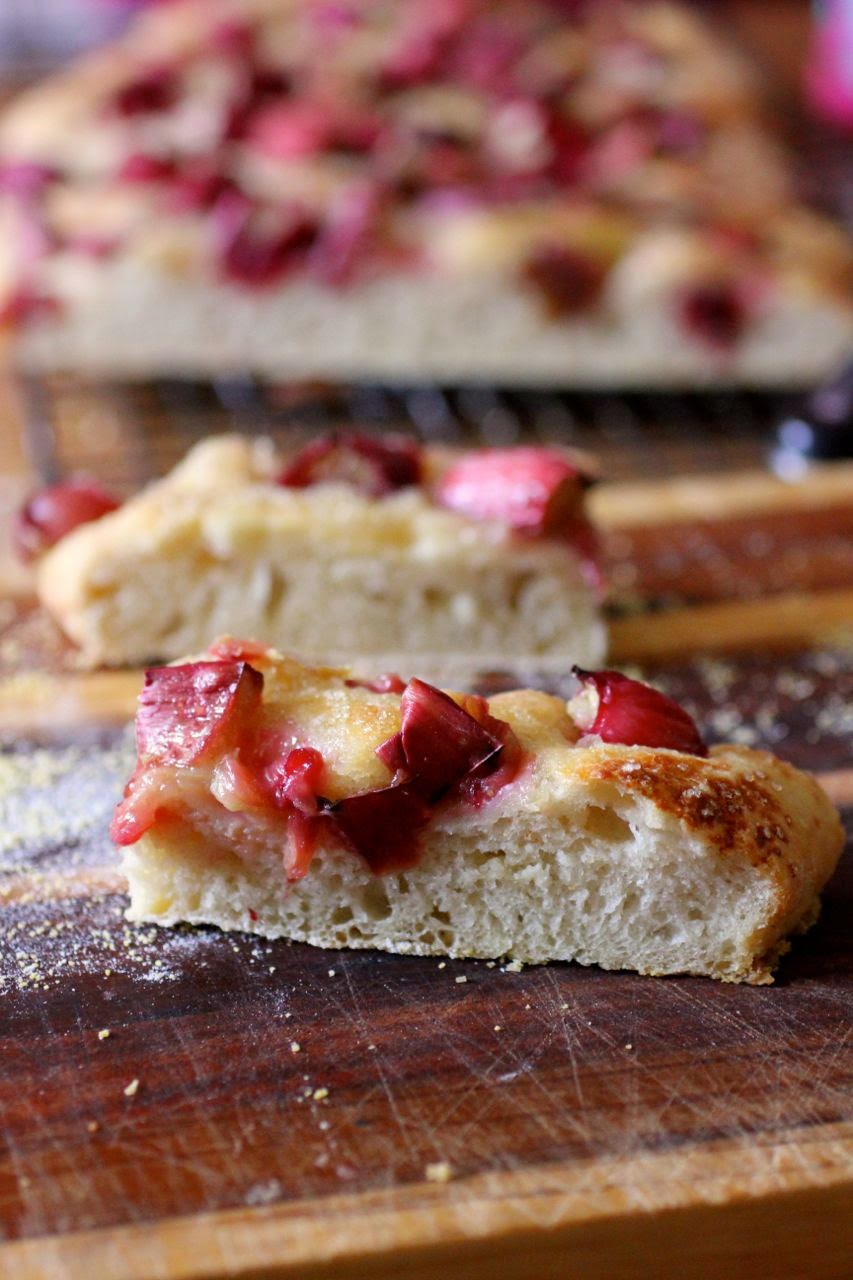 The resulting dough was far softer than the recipe I was using, and made a smaller focaccia.  Yet it worked.  Which just shows that dough is forgiving and I shouldn't stress so much about converting yeast to sourdough!  More of a problem was that E and Sylvia were not so keen on the rhubarb.  It was a bit tart for them.  Perhaps omitting the raspberries was not a great move.  I loved it.  We ate it and then packed some in our bags. 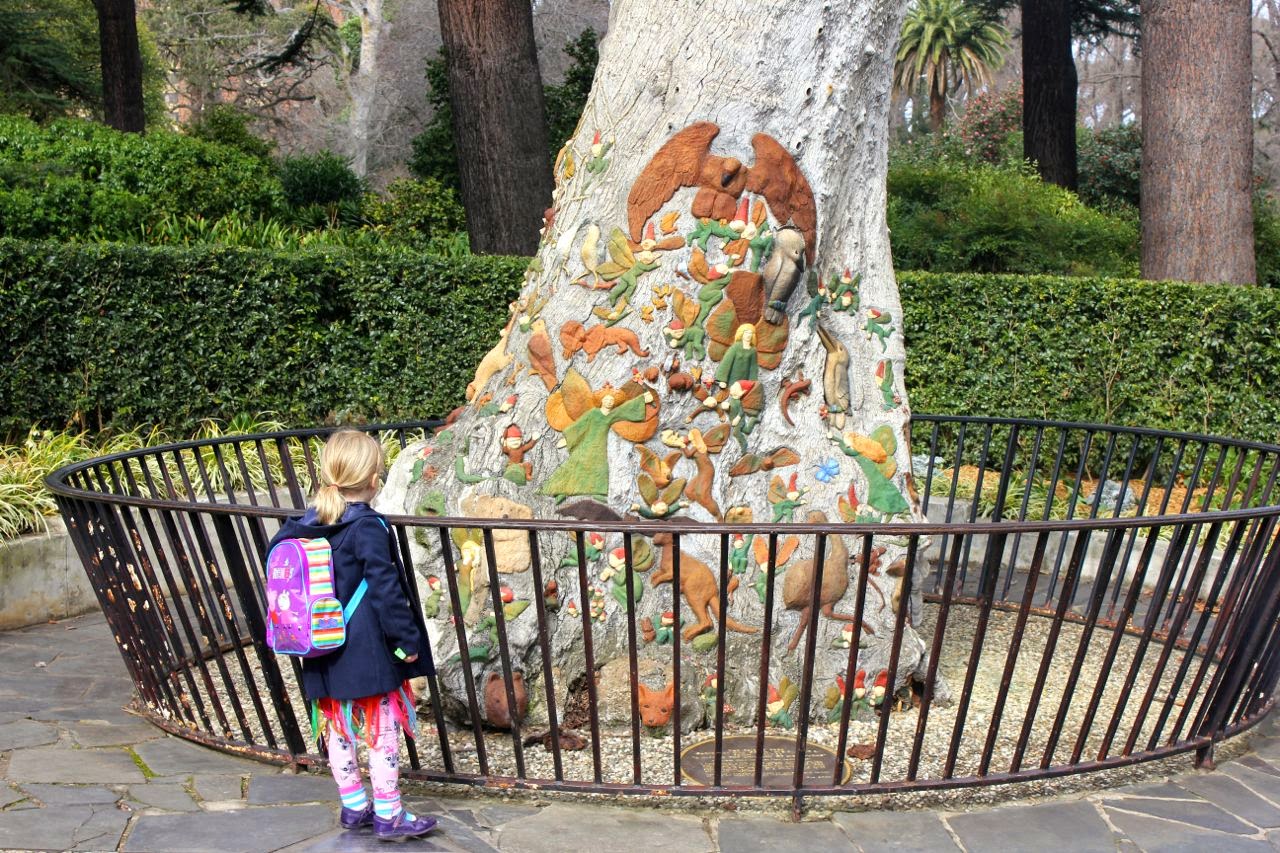 Sylvia and I headed off to the Fitzroy Gardens.  It is a favourite place of mine and a fine place to compensate for some theatre tickets that went amiss.  (You can read more about the gardens in a post on our trip to the Fitzroy Gardens in 2010.)  First stop was the Fairy Tree.  The beautiful wood carvings never cease to delight and amaze me. 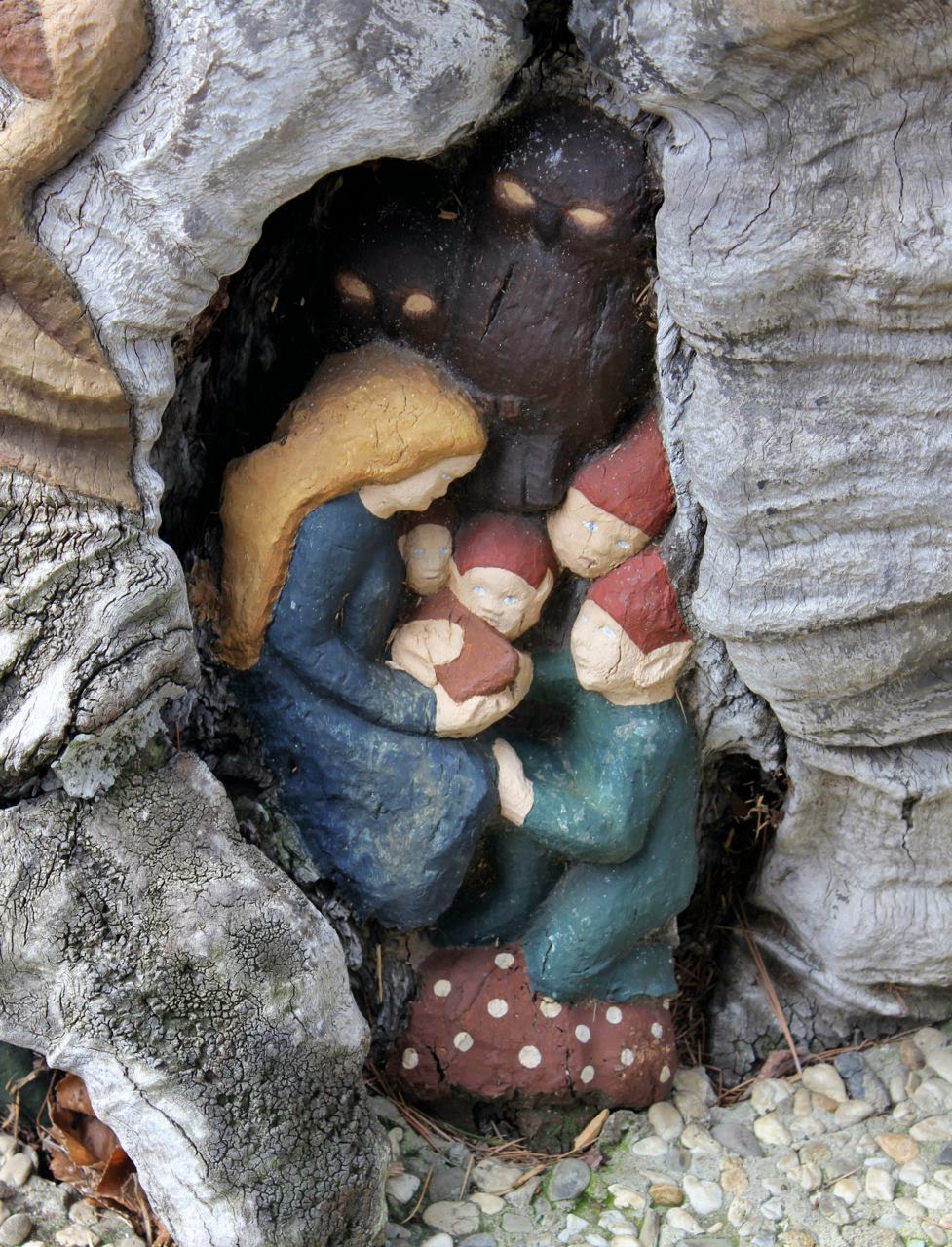 Olga Cohn's imagination produced such poignant details of the life of fairies in our gardens.  We sat looking at the tree and eating our focaccia and wishing we had packed more. 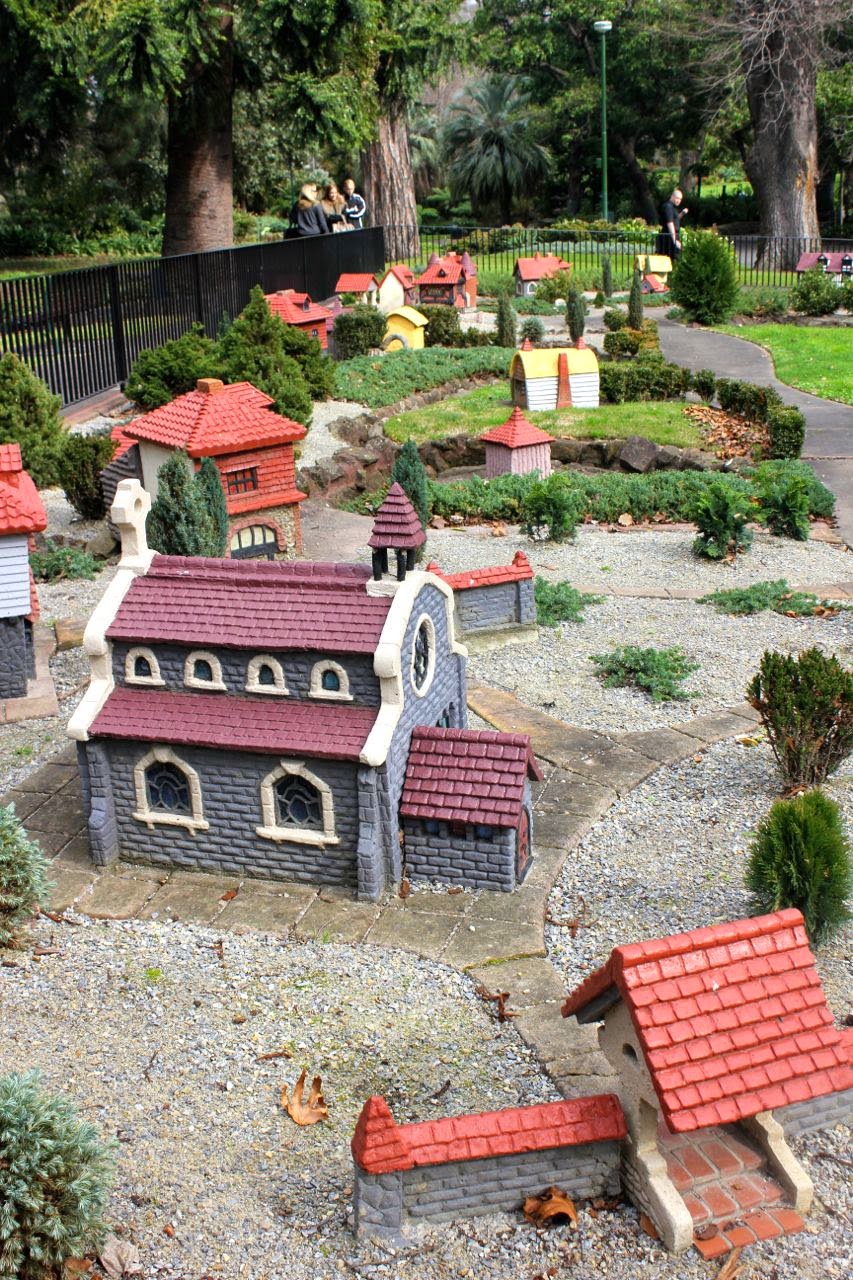 By the Fairy Tree is the Minature Tudor Village.  I have also been going here since I was a child and still love it in all its teeny tiny glory. 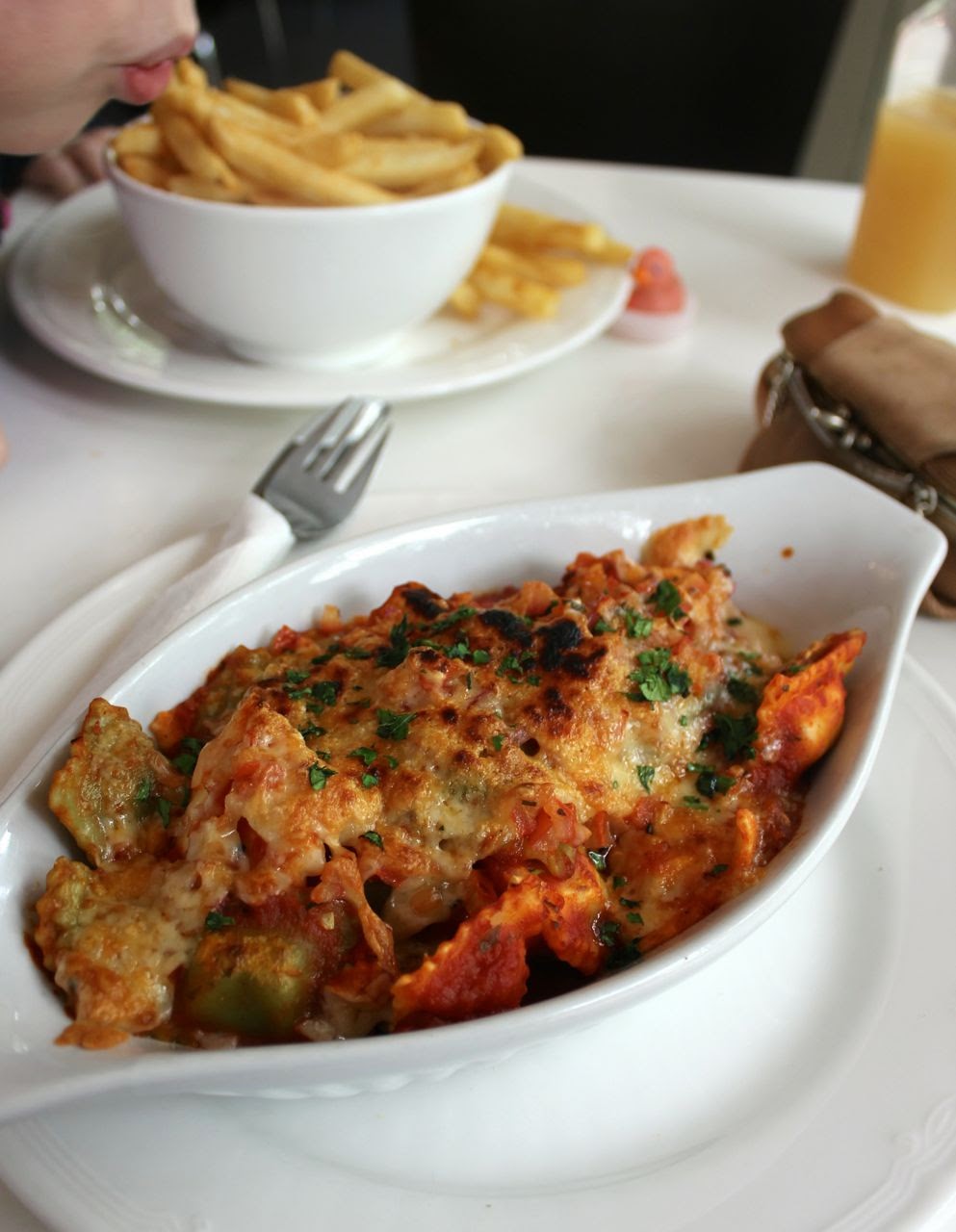 I had planned lunch in the city but once we had walked around the gardens and spent some time at the giraffe swings and dragon slide, Sylvia was hungry.  It is so much slower to get around with a small child.  We went to the Pavillion near the Fairy Tree.  It is more restaurant than cafe.  We paid more than I had intended and were given more food than I needed.  However my ravioli was very nice. 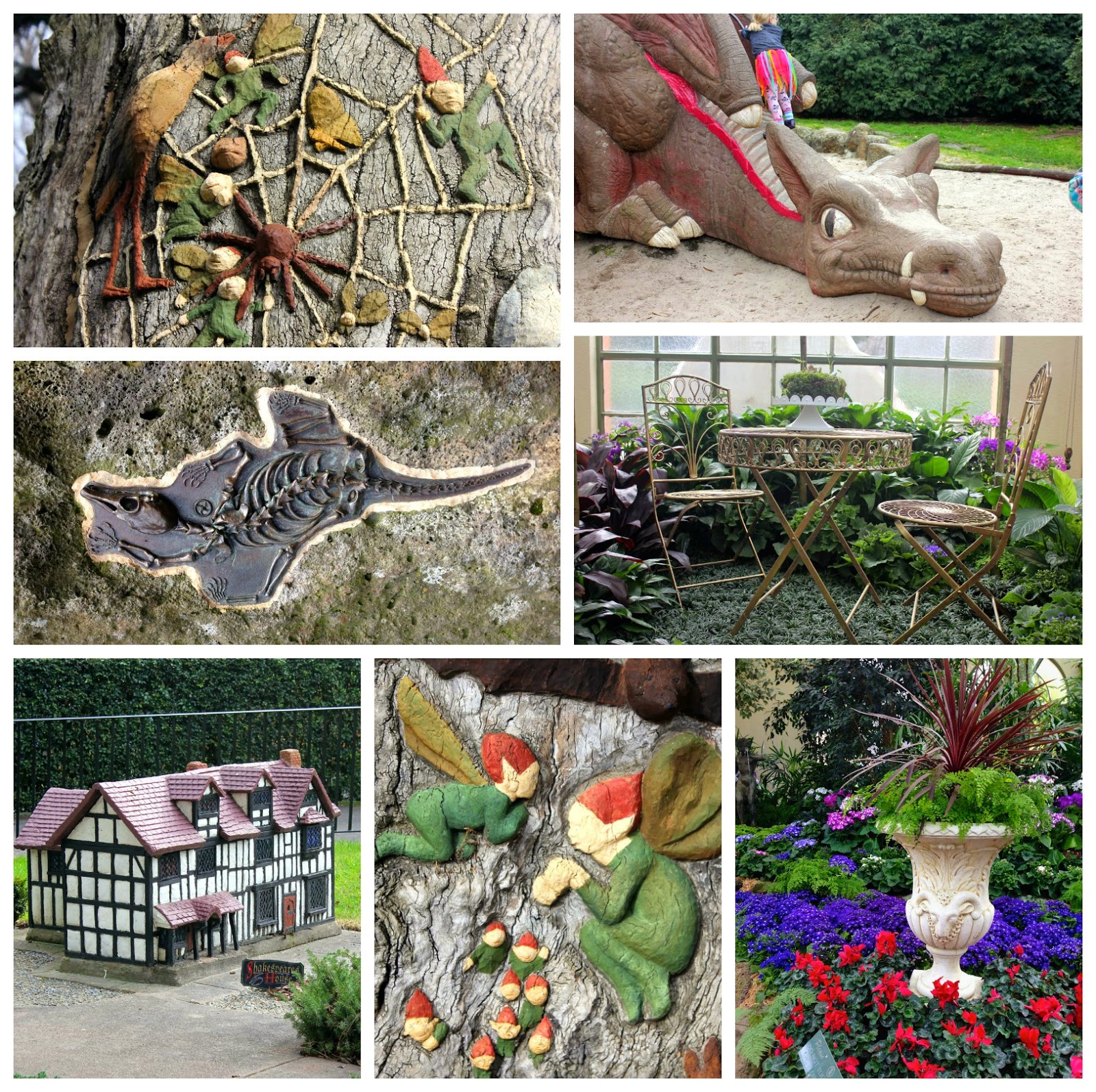 Sylvia was going down to stay with my parents while E and I went to a trivia night.  Fortunately my mum rang as Sylvia tried to convince me to go into Cooks Cottage.  The moment passed and we walked on to the Conservatory and admired the flowers and the fish pond.  I particularly liked the foilage cake on the table and chairs. 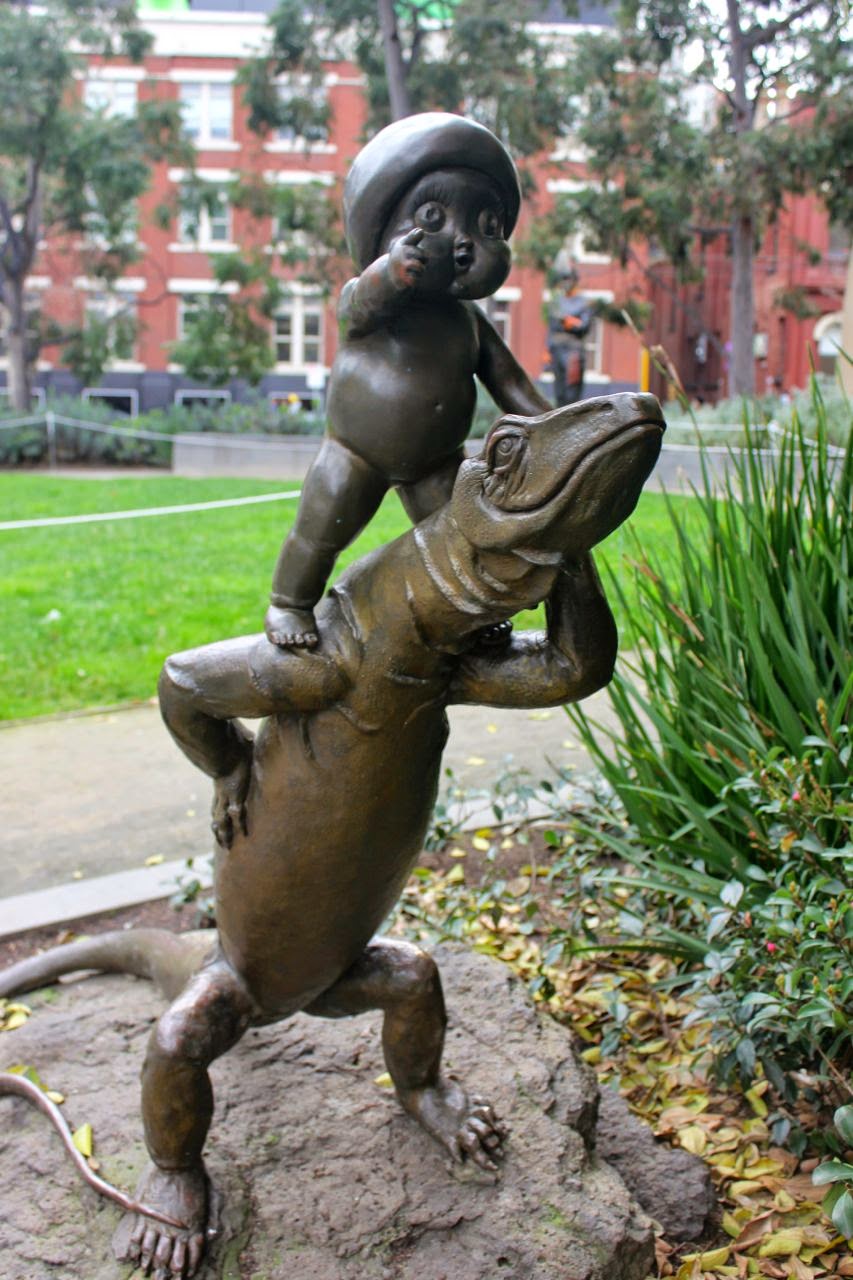 Then we caught the Circle Tram around to the State Library where we met my parents.  Outside I noticed this statue from May Gibbs' Snugglepot and Cuddlepie.  This Gumnut baby and Mr Lizard are just the sort of folk who might visit the folk of the Fairy Tree.  It seemed a fitting end to our adventures.

One year ago: Sourdough Basics 101 - Making a Starter
Two years ago: Fudgy Coconut Brownies
Three years ago: Besan Vegetable Frittata and a week of eats
Four years ago: NCR Carrot and Fennel Soup
Five years ago: Shopping, Sylvia and Soup
Six years ago: Easy as Vegetable Pie
Seven years ago: Rumbledethumps: death to the red hag!

Start the night before you want to eat it or at least 8 - 10 hours before you want to eat focaccia.  Take a large mixing bowl.  (The dough rises a lot - it was about an inch below the top of my largest mixing bowl in the morning. See second top photo of dough the night before to see how much it grows.)  Mix starter, yeast and  warm water.  Stir in oil, flour and salt to make a soft dough.  Cover with clingwrap and leave overnight at room temperature  for about 8 hours.

In the morning, preheat the oven to 200 C.  While it heats, prepare the rhubarb and sprinkle a large baking tray with polenta.   Sprinkle dough with flour and carefully take the risen dough from the bowl - it is fairly soft and sticky.  Place on a lightly floured surface. Using floured hands, pat dough out in an oval shape about an inch thick (might be thinner in places).   Carefully transfer to the prepared baking tray.  Scatter with rhubarb and press lightly into the dough.  Drizzle with olive oil and sprinkle the sugar on top.

Bake for 40 minutes until the fruit juices are running free and the sides are golden brown.  Eat hot or cool on a wire rack.

* NOTE: Ideally take the starter out of the fridge to warm up to room temperature a couple of hours before starting to mix the dough.  I forgot and it was fine but will try and remember next time.  It can also be made without the rhubarb and sugar topping - just drizzle with oil and a pinch or two of salt (I find 600g better for the plain focaccia).

On the stereo:
Don't Try This At Home: Billy Bragg
Posted by Johanna GGG at 23:32