Orange, choc chip and hemp seed cake and a rally 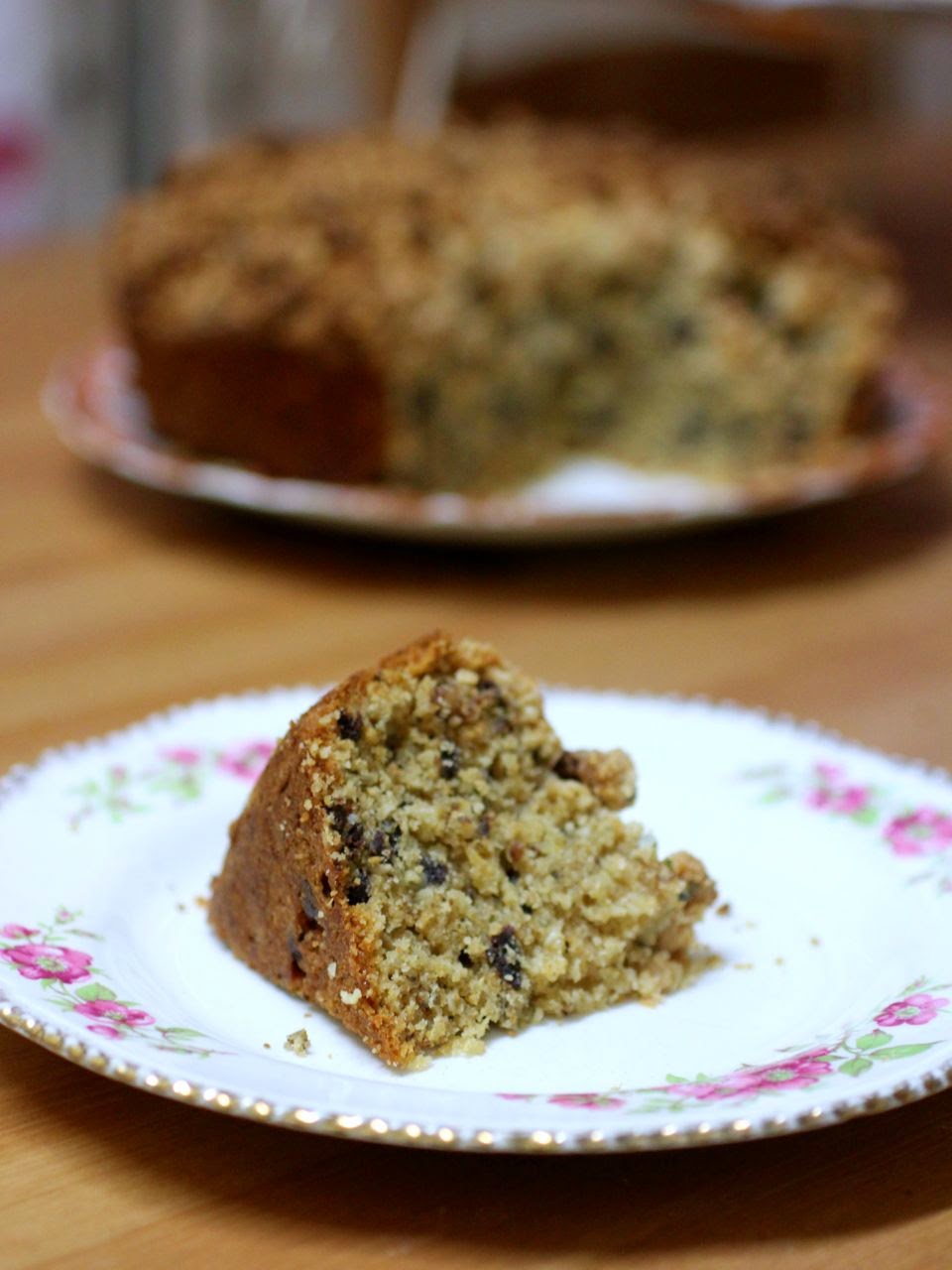 It has been a busy weekend of catching up with friends, marching and baking.  It was sunny enough for Sylvia to play in a friend's blow up pool yesterday and to make light work of marching against the government's budget cuts today.  When we got home I made a cake that I had been planning in my head since I bought blood oranges last weekend.  With Vegan MoFo starting tomorrow, I decided on a vegan cake.  It was crumby and yummy, albeit not quite what I had envisioned. 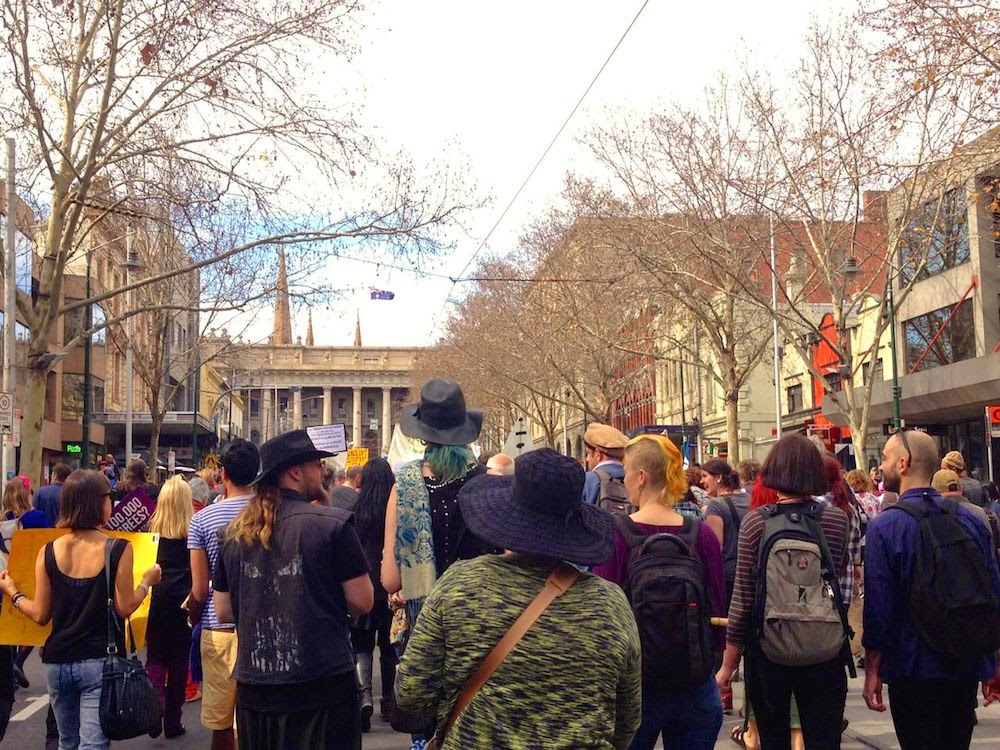 We went on a March in August rally today.  Speeches and placards raised a broad spectrum of discontent with the government.  Refugees, education, welfare, climate change, racism, live exports, the media, gender, health care, transport infrastructure and sexuality.  We saw a few familiar faces, bought badges, signed petitions, cheered the speeches and walked and walked.  Afterwards we had churros and chocolate at San Churro. 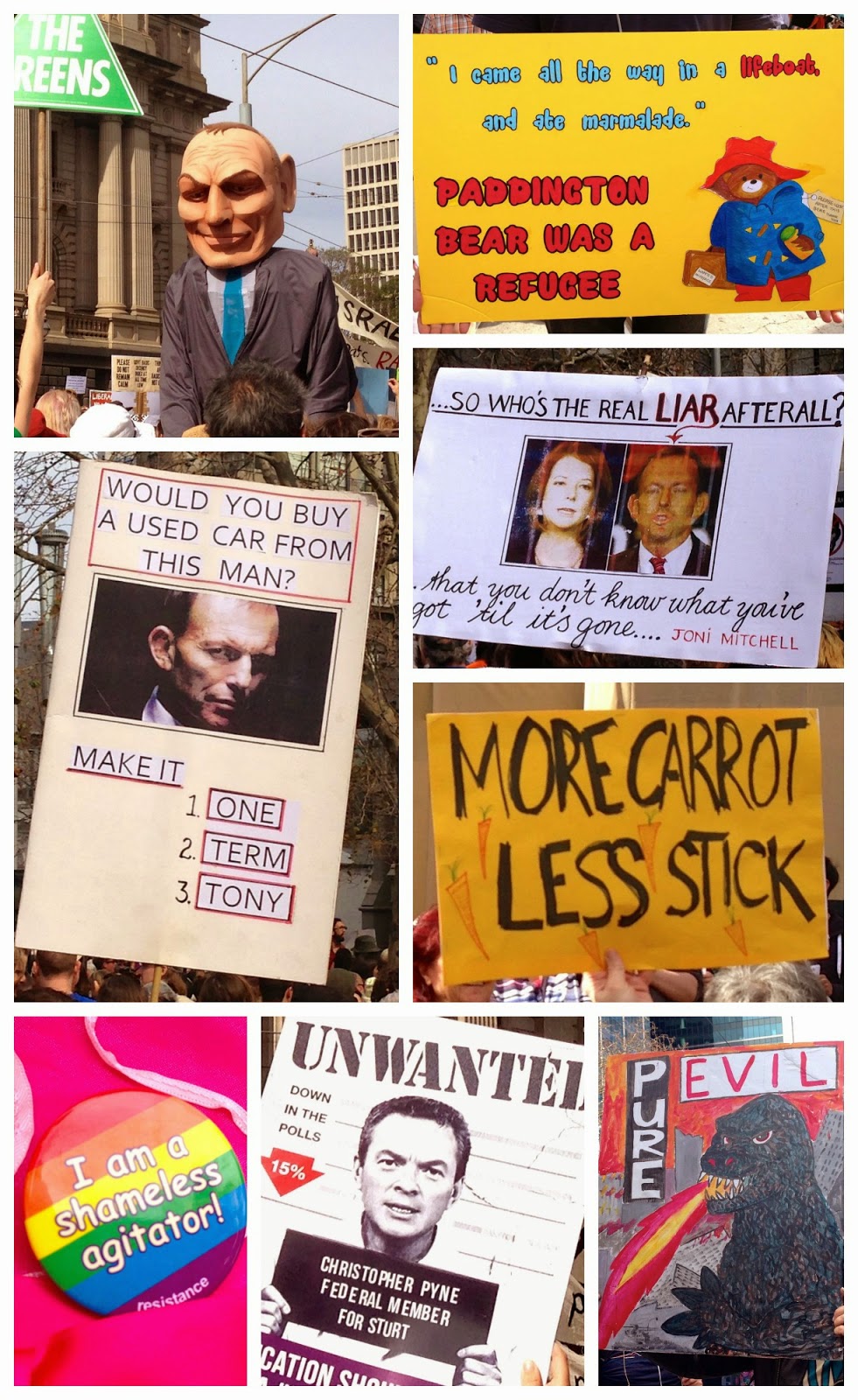 With sunny weather, wearing unfamiliar summer shoes meant I was rather footsore by the end of the day and happy to get home.  With Sylvia in the bath, I set about making an orange, choc chip and hemp seed cake.  It started as a raspberry and orange cake with coconut crumble, which I found in Emma Rose's Have your cake cookbook.  By the time I had finished with it, she probably would not recognise the recipe. 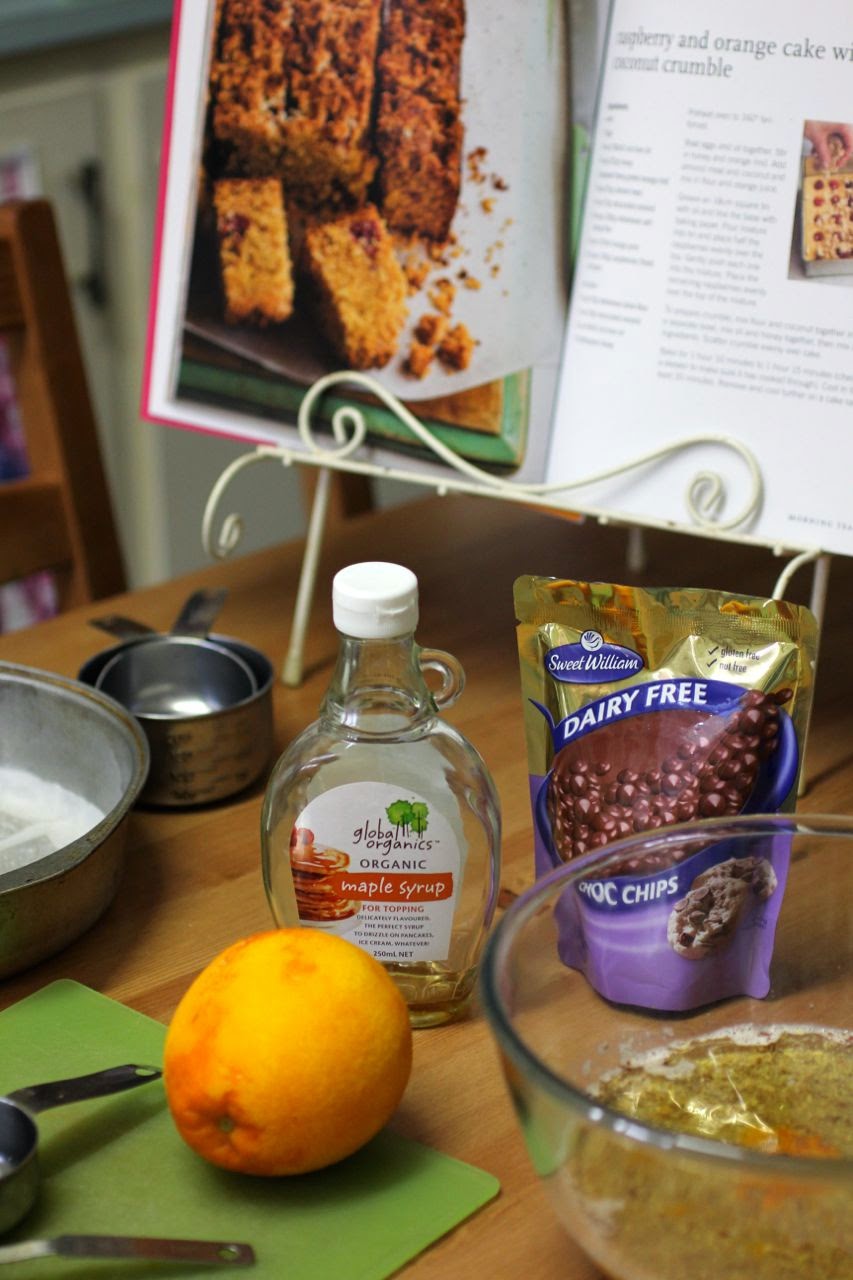 Perhaps it is the thought of Vegan MoFo that had me ditching honey and eggs in favour of maple syrup and linseeds (or flax seeds).  I had some vegan choc chips so used these instead of raspberries.  And I threw in some hemp seeds because they were there. 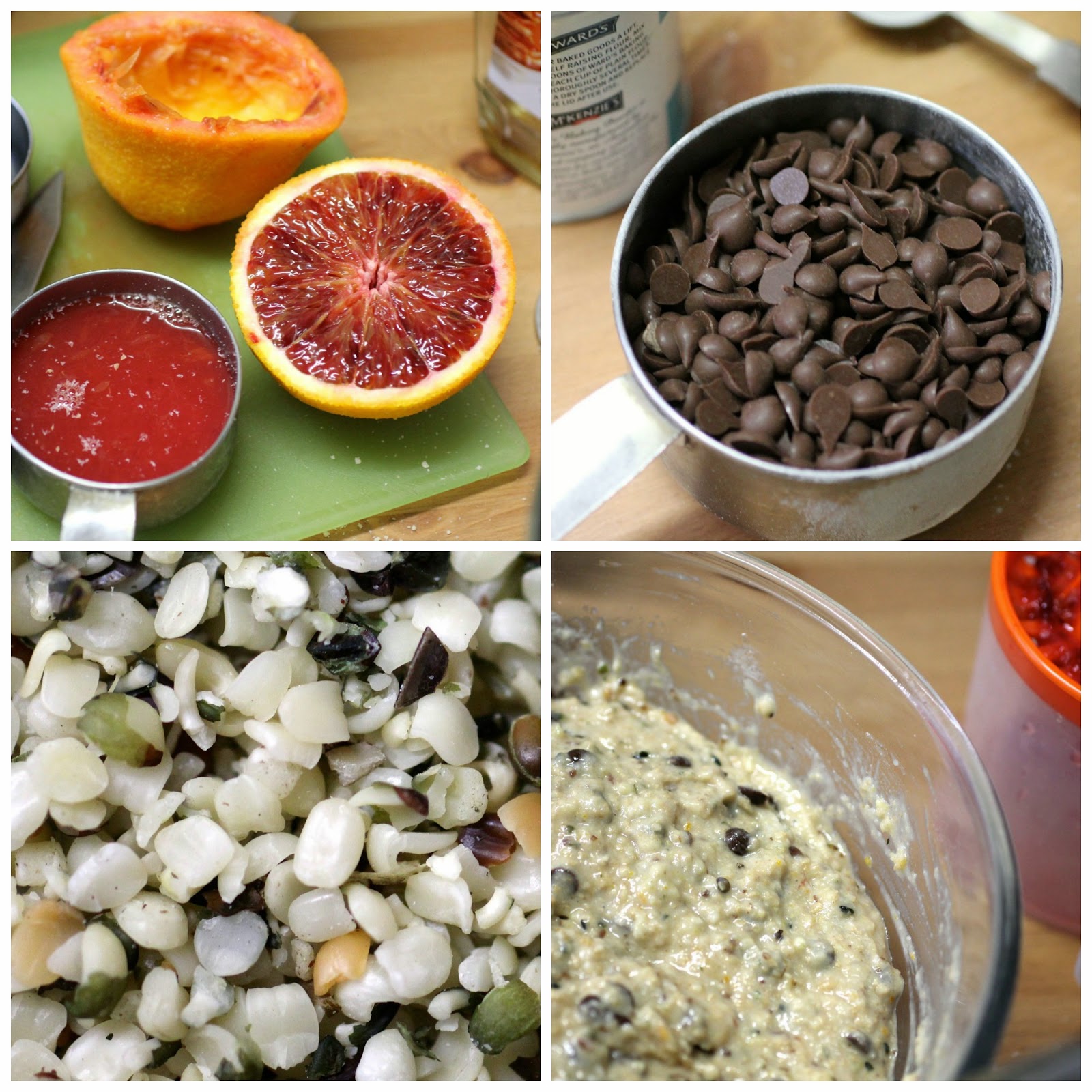 The cake was good but not great.  It was quite crumbly rather than being moist and dense.  The orange flavour was there but not quite as prominent as I had hoped.  Nor was the colour of the blood oranges in evidence in the final cake.  And the choc chips were like choc specks.  The maple syrup was far less sweet than honey would have been.  Despite all these quibbles, it was full of flavour and texture and tasted lovely with a dollop of vanilla yoghurt.  I think I would love it with a chocolate sauce. 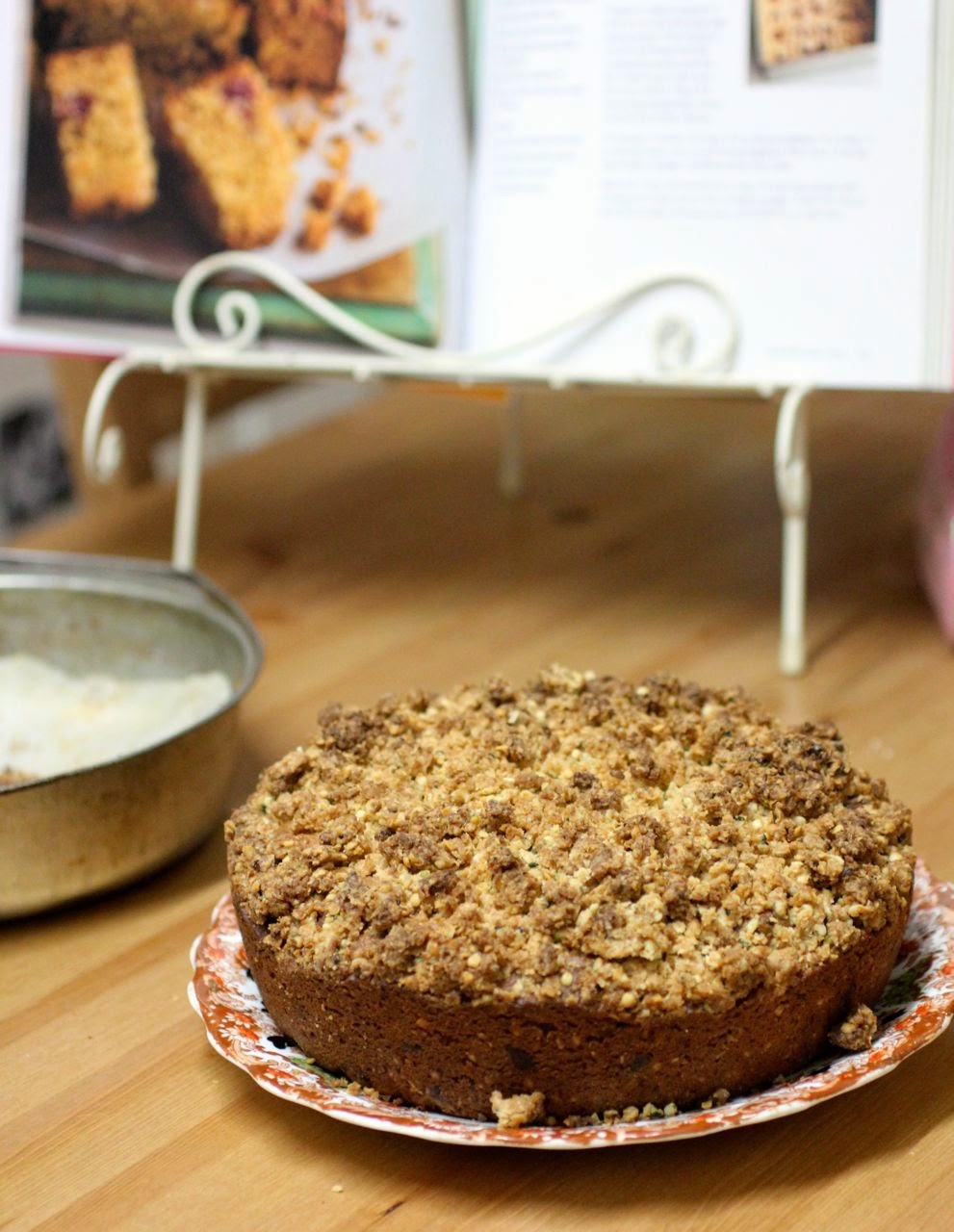 So the lesson of the post is not to experiment with recipes after a long day of rabble rousing.  I got confused about how much flour I had put in the crumble mixture - was it one third or two thirds of a cup?  Even worse was my discovery that I had totally miscalculated the conversion of the tin size in the recipe to one of mine.

However it does feel good to have cake at the end of a long day and to have cake in the house to start the week tomorrow.  When I shall see you for the start of Vegan MoFo, with perhaps the silliest theme I could have come up with. The Letter S.  More about that soon.

Orange, choc chip and hemp seed cake - work in progress
Heavily adapted from Have your cake by Emma Rose

On the Stereo:
The Captain: Kasey Chambers
Posted by Johanna GGG at 23:29