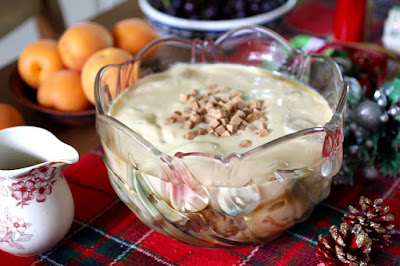 As the end of the year rushed towards me, I looked in the fridge at the salted caramel custard I bought on sale which sat in the fridge next to the butter and cream that I had bought for Christmas.  Then it struck me!  Trifle!  Caramel sauce!  And so dessert for New Year's Eve was conceived. 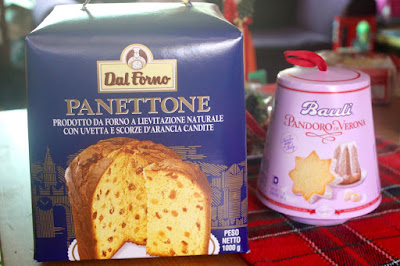 This was not to be the sponge cake, custard and jelly trifle my mum excels at.  I decided upon a salted caramel and apple flavour.  Sylvia and I trawled the supermarket for pannetone and only found madeira cake.  I went to a nearby Italian shop where I bought a large pannetone for $10 and had a small plain one thrown in for Sylvia.  She is not keen on sultanas, peel or any other bits! 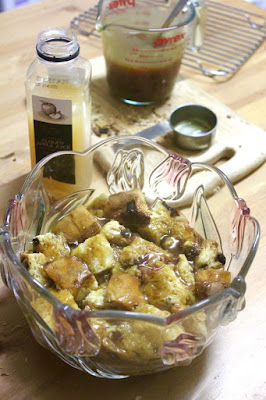 This was my first trifle I had made.  I avoid them because I don't make jelly.  Unlike my mum.  I do love pannetone in trifle.  I decided to make a caramel sauce and then was overwhelmed by the online tyranny of choice.  Fortunately I had recently seen an easy one on Munchies and Munchkins.  And so once Sylvia was finally asleep I made one.  It was so thin and I was tired.  Finally I reasoned it would cool on the pannetone. 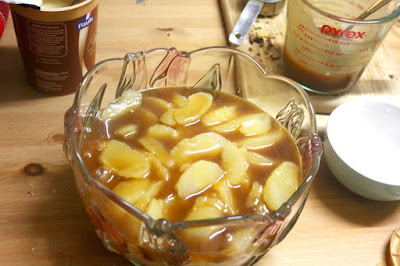 I bought a tin of pie apples.  They were ok but could have been better.  I decided more caramel sauce would make them better.  I had visions of beautiful layers of trifle.  (Too much pinterest!)  So I tell you what I will do next time.
This is not a negative comment on the trifle but more like my recipe notes to refer back to next time I have the notion to make a trifle. 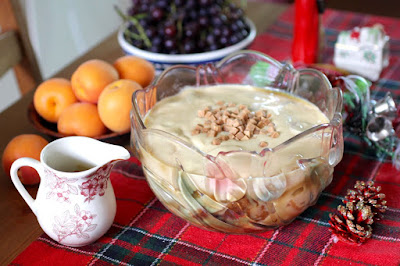 We sort of enjoyed the trifle but I was pretty full from haggis tacos and it was such a mess.  I think the best bit was that I was really proud of my salted caramel sauce.  I could have just had the sauce and been very happy.  It was great drizzled over the trifle.  Then I had to lie on the couch and groan because I was so very full.  We forgot to put brandy cream on E's serving but I think he was so full he didn't mind. 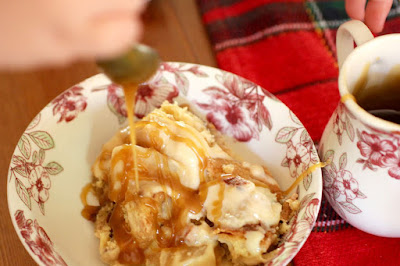 We had heaps of trifle leftover.  I decided to take over half the trifle to my parents house the next day.  I know my dad likes trifle and, at a pinch, their chooks will eat anything.  I was very pleased that the trifle was served for dessert and polished off.  My dad ate his serve happily but was so surprised to offered more "trifle" that he had to google trifle to check if it was indeed a trifle.  Google said Yes! 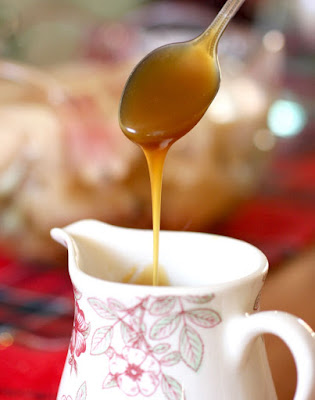 We finished the rest of it off that evening at home.  Then we just had some caramel sauce leftover.  It lasted us about a week.  I kept it in the fridge where it was quite thick.  It could be gently warmed to pouring consistency in the microwave.  I will admit to sneaking the odd spoonful straight from the jug but it was also very good drizzled over ice cream.

Cook brown sugar, castor sugar, golden syrup and butter in a medium saucepan until melted over medium low heat.  Reduce heat to low and cook for about 10 minutes until slightly darker and bubbly.  The sugar should have mostly melted when you hold up a spoon.

Remove from heat and stir in cream.  Return to heat for a few minutes to warm it up (but not bring to the boil).  Stir in the salt about 1/2 tsp at a time and tasting as you go.  It will be very thin but will thicken as it cools and will be quite thick in the fridge.

On the Stereo:
Swell Season - self titled
Posted by Johanna GGG at 22:56