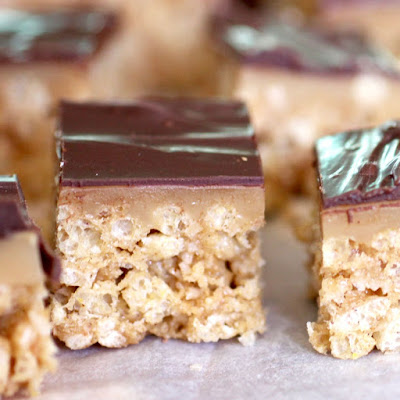 When my brother said we were meeting for lunch for his wife's birthday I decided to make a rice krispie riff on the classic Chocolate Caramel Slice for my sister in law who loves traditional Aussie slices.  It was not perfect but it was gelatine free, gluten free, almost dairy free and avoided all the nut allergies in the family. 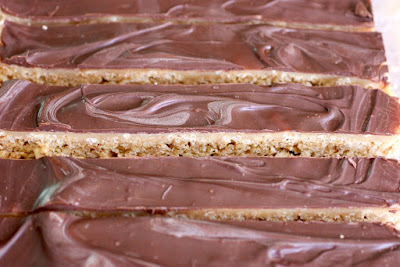 With just one look you can see I could do better.  There is the tell tale chocolate bloom.  And not enough chocolate.  I think I would double it next time.  Underneath this is a caramel layer that was so chewy I called it "the jaw breaker".  Then there was the rice krispie layer which was good but perhaps when I decided to use more coconut I might have used less rice krispies.  Alas, it didn't look as impressive as the slice that inspired me.

At least it wasn't a melting 42 C like today!  And the almond butter worked just as well as the cashew butter in the previous rice krispie slices I have used before.  I hope to experiment more with this idea.  Cooling the caramel on a plate while cooking seemed helpful in getting a sense of how far the caramel had cooked.  Having complained about cooking it too much, the coconut condensed milk made a nice caramel but I wonder if it did not colour up as much as the dairy condensed milk. 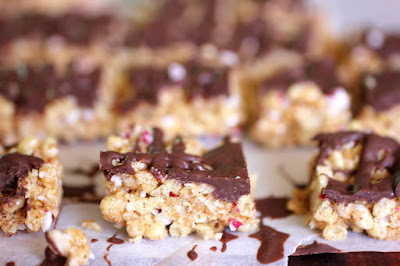 I only needed part of the rice krispie mixture and then ants have attacked leftover candy canes so I used the two or three that I salvaged to make a peppermint version with the rest of the slice.  It was good but again the coconut made it a bit dry and I think stopping to bash up candy canes (on a folder tea towel so we didn't pock mark the kitchen table like last time) meant that it didn't hold together so well. 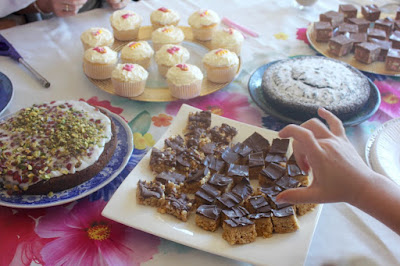 We took it down to my brothers' place where a bbq was held but the main event was the sweet food.  My sister in law made gorgeous gluten free cupcakes and a yummy clinkers slice.  My mum made a dependably good gluten free chocolate cake and an impressive gluten free pistachio and pomegranate cake.  My sister had had a birthday celebration for her boyfriend the previous night and brought along leftover chocolate layer cake.  It was a tyranny of choice.  Which is no bad thing at a birthday celebration.

Put nut butter, rice malt syrup, brown sugar, margarine and salt into a large microwave proof bowl and heat in microwave until warm and gooey (about 1 minute).  Mix in coconut and rice bubbles.

To make the Chocolate caramel rice krispie slice:
Press 2/3 of the mixture into a 22cm square tin lined with baking paper.  (I found using my hands was the best way to press it firmly and that the quicker this was done after mixing the better.)

Heat the chocolate and oil in the microwave until mostly melted and stir to completely melt.  Spread over cooled caramel layer.

Cool in the fridge and cut into squares to serve.  I found that small squares were required because it was quite intense.  Keeps in an airtight container for at least 4-5 days.

To make the Peppermint candy cane rice krispie slice:
Mix remaining mixture with crushed candy canes and peppermint essence.  Then press into a lined loaf tin.  Do this as soon as possible after stirring.

Melt the chocolate and oil in microwave until mostly melted and stir to complete melting.  Drizzle over peppermint slice.  Cool in fridge to set chocolate and then cut into squares.

On the Stereo:
Best of Bowie: David Bowie
Posted by Johanna GGG at 22:01