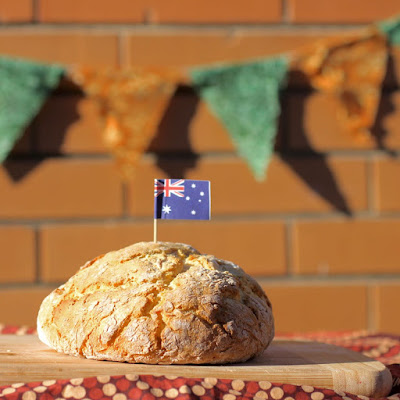 When we were young, my mum would mix flour and water and places it in the coals of the fire in the BBQ at a bush picnic area.  We ate it with slabs of butter from the local dairy and (for my parents) billy tea.  I have such fond memories of it that I am very picky about damper recipes.  They have to be very plain and have a thick crust. 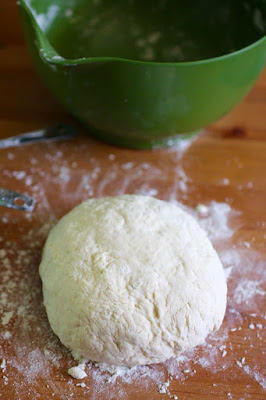 I read somewhere that damper is Australia's version of soda bread.  Though I used self raising flour in my damper, it is different from using bicarbonate of soda and buttermilk together in soda bread.  I love the simplicity of damper.  If you have flour and baking powder you can make it.  Which I guess is why it was part of the swagman's diet in colonial Australia. 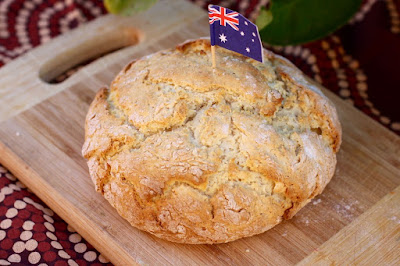 Of course in the days when the swagmen wandered the bush they could stop at will to light campfires on which to bake damper and boil the billy.  Nowadays we are more aware of bushfires and must be more careful about lighting fires.  This summer is not a great one for cooking damper on an open fire.  The hot dry weather has resulted in many days of total fire ban.

When we were young a bbq was a grill above a fire.  These days bbqs often involve gas and coals both at home and in picnic spots.  So I guess there are generally less people lighting campfires.  However you can baked damper in your oven.  It wont have that charred taste of the fire but it can have a thick crust and be fluffy inside. 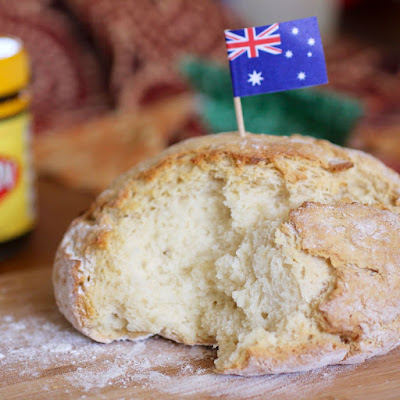 We really loved this damper.  It had that robust yet fluffy crumb with a thick crust.  More like beer bread than soda bread.  I tried to bake it in a casserole dish to imitate a camp oven but it cooked too slowly so then I baked it on a baking stone until it was golden brown.

We tore chunks of damper to eat with a bottom-of-the-fridge-clearing stew.  Then we had some with jam for afters.  Well E and I did.  Sylvia had been on a sleepover the previous evening and had fallen asleep at 5pm.  I tried to wake her for dinner but she slept through til the next morning.  A shame.  I think she would have enjoyed the plain damper.  Seems I need to make it again.  And it would be perfect on Australia Day next week.

I am sending this to Kimmy for Healthy Vegan Fridays, Solange and Margot for Inheritance Recipes, and Helen and Camilla Credit Crunch Munch.

Mix salt into flour and then gradually mix in water to make a soft sticky dough.  You can use your hand to knead in the last few bits of flour and give it a couple of kneads on a floured surface to make a smooth(ish) dough.  However it should be treated gently as too much handling will make it tough.  Bake on a floured baking stone or baking tray in a hot oven until golden brown.  Mine took about 40-50 minutes at 220 C but my oven is quite slow.  Best on day of baking but will be ok the next day.

On the Stereo:
Ruby: Killjoys
Posted by Johanna GGG at 08:41