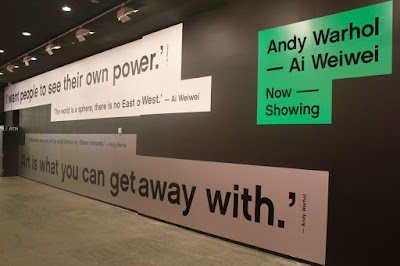 The school holidays are whizzing by.  It is hard to believe we are halfway through January.  We have been busy with visits to the art gallery, the museum, the pool, family and lots of tidying up at home.  We have been listening to a lot of David Bowie.  His death was a shock.  His life was amazing.

I mention David Bowie because his constant challenging and inventive artistry might be compared to Warhol and Weiwei.  One of our fun days out was to see the Andy Warhol - Ai Weiwei exhibition at the National Gallery of Victoria.  It is truly spectacular, beautiful, esoteric, fun, thought-provoking and innovative.  A bit like David Bowie!

For those who are not familiar with Andy Warhol and Ai WeiWei, they are two innovative and significant artists whose lives and art have similarities.  Andy Warhol was born in 1928 and achieved fame as a pioneer of pop art in New York in the 1960s.  He died in 1987.  Ai Weiwei was born in 1957 in Beijing and is a contemporary artist and political activist who is still alive.  They never met but Weiwei was exposed to Warhol's work when living in Manhattan in the early 1980s. 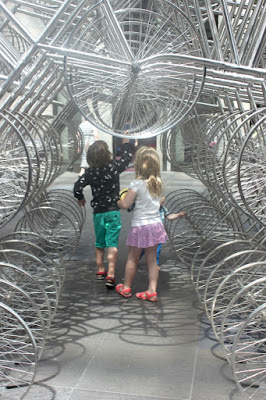 We start in the foyer of the gallery where Weiwei's Forever Bicycles installation transforms many frames and wheels into a massive monolith of metal.  Like much of what we will see throughout the exhibition, it finds beauty in mundane objects. 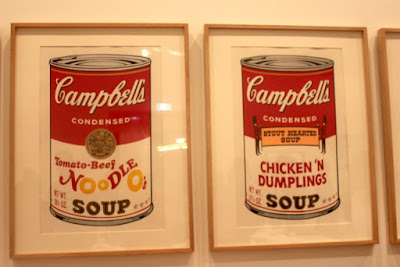 I know a lot more of Warhol than Weiwei and his Campbell's soup images are so familiar as to be hackneyed.  Yet is still a delight to see them here with a lego image of Weiwei dropping a Han Dynastry Urn.  Two sides of taking culture for granted.  That which is so precious we can barely touch it and that which is so common as to be invisible. 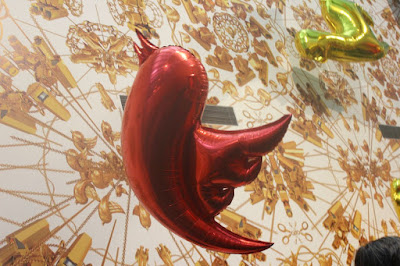 Next is an installation where we spent most time.  Large balloons in the shape of the Twitter bird and a Llama (or Grass Mud Horse which is a symbol of defiance against Chinese internet censorship).  They float in front of a wallpaper that on closer inspection has CCTV, Twitter and Llama motifs.  It is a place of beauty and peace with deeper ideas imbedded in the imagery. 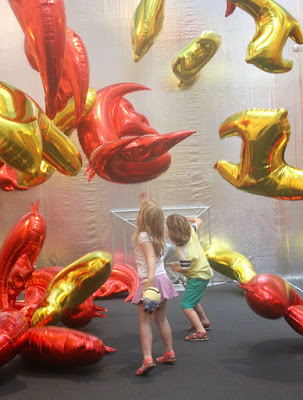 Fans gently waft the balloons about but the public is also able to push them this way and that.  It is particularly attractive to kids who are used to punching balloons.  I am there with some family including my nephew Dash who is great company for Sylvia.  I think they could have stayed here all day caught up watching the balloons swirl and punching them about.

We are there long enough for me to take up a conversation with the guard who has the thankless task of asking children to be gentle with the balloons.  She tells me they have to replace some of the balloons when they get shabby.  And that Weiwei personally designed the space.  "So what was he like", I ask in fascination.  Apparently he was always in the other room to this guard!  So no insights there.  What a shame.  The whole exhibition shows him to be an amazing person. 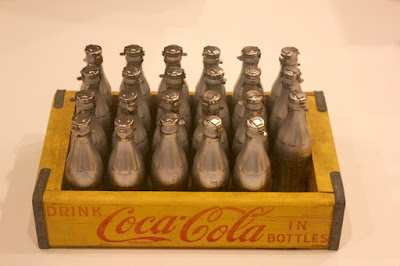 Then we are back to rooms of pictures and exhibits.  So many ideas crammed in here that it is intriguing.  Lots of ordinary life transformed into art.  Some of it both exotic and familiar such as Warhol's box of coca cola bottles from 1967. 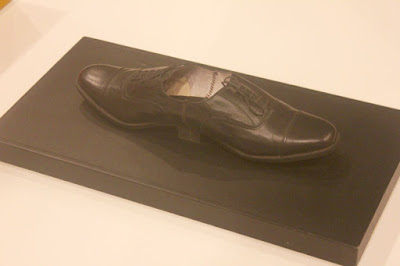 Weiwei's one man shoe is one of the most bizarre exhibits.  What would this man look like?  How would he walk? 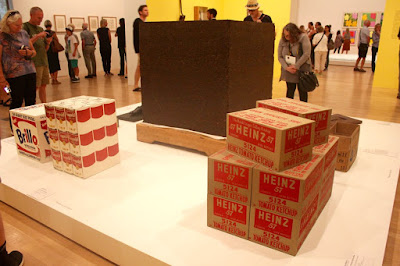 More mundane and yet every bit as fascinating is Weiwei's Tonne of Tea.  (See the huge brown block.) 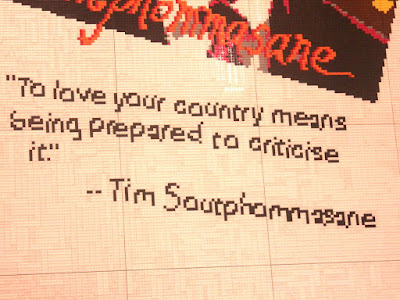 Bringing together the every day and the political is WeiWei's Letgo Room.  The walls and ceiling are made of over 3 million faux-Lego blocks.  (Apparently Lego refused to provide blocks for political artwork.)  The block depict quotes and photos from high profile political Australians such as Gary Foley, Rosie Batty and Julian Assange. 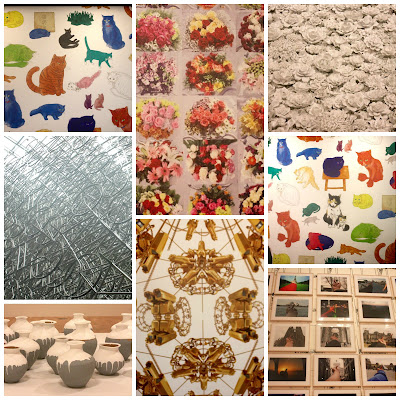 Both Warhol and Weiwei had many multiples images in their work.  These reflect the mass produced items of the industrial age.  Little boxes made of ticky tacky and they all look just the same.  Yet often not quite the same.  I love the beauty both artists find in this repetition. 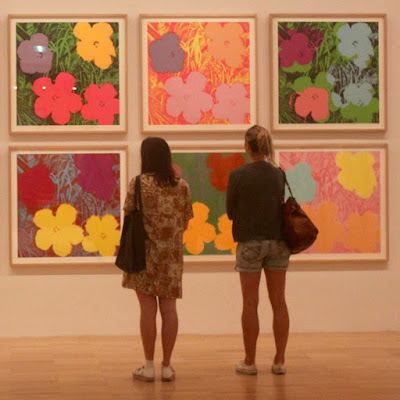 There are many flowers in the exhibition.  These are Warhol screen prints. 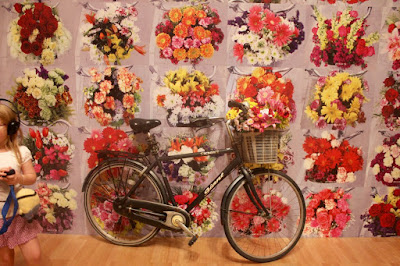 When the Chinese government confiscated Weiwei's passport in November 2013, he posted a photo of a bouquet of flowers in a bicycle outside his studio every day on social media in protest until the passport was reinstated in July 2015. 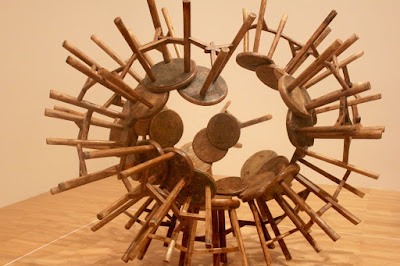 I really love wandering through a gallery and taking in images rather than reading lots of signs.  Yet I probably would have enjoyed reading more about the images because they have many layers of meaning in the ouvre of both Warhol and WeiWei.  Walking through with children makes reading harder.  So I was interested to read online that this arrangement of antique stools is a commentary on the relationship between the individual and the collective in China's socialist history.  And I had just thought it an interesting way to arrange stools. 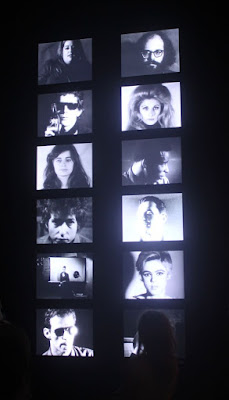 I really liked the multi media room with Warhol's Screen Tests.  (Do you recognise any of the faces above?)  It also had footage of Weiwei riding about Beijing and a slideshow of 7677 called 258 Fake.  I would have loved to have sat and watched more that I had time for before the kids were off onto the next room. 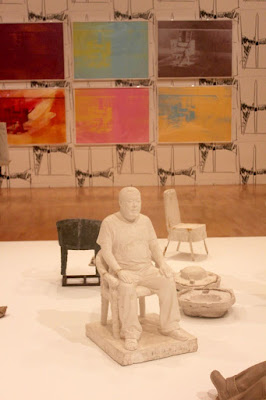 And in the next room I saw statues and prints and photos of Weiwei flicking the bird at famous monuments around the world.  I can't tell you too much about this or the images screening in the room with the bean bags.  I discovered I had lost my ticket and had to get across the foyer to the remainder of the exhibition which included more prints and items from both artists' studios.  (I probably had Stendahl's Syndrome by then.)  The one piece of information that fascinated me was the sparkle on some of Warhol's prints came from crushed glass scattered in the ink. 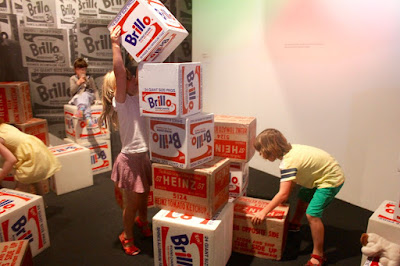 Once out of the paid exhibition we proceeded to the Studio Cats for kids which is both interactive and free.  It is complementary to the Warhol-Weiwei exhibition.  Sylvia and Dash stacked Brillo and Heinz boxes while my mum and dad waited in line for the photo booth where they could make all sort of faces to make a fun video that we emailed to ourselves. 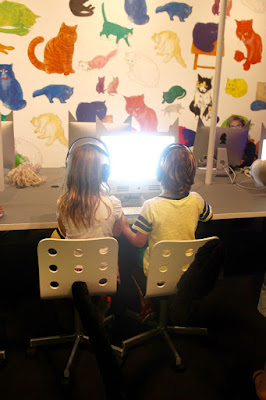 They sat on the chair with cat tails in front of monitors with cat ears to write captions on cat photos (Clever Cats). 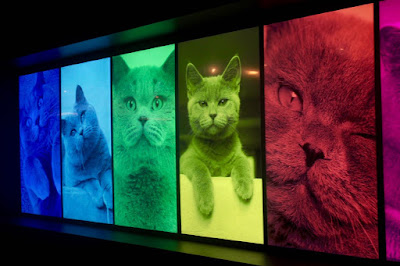 Then we sat and watched a slide show about how much Warhol and Weiwei loved cats and how many millions of cats are on the internet today.  Coincidence? 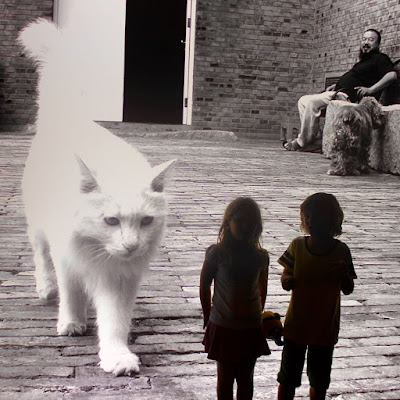 And there are lots of cat pictures in the room too. 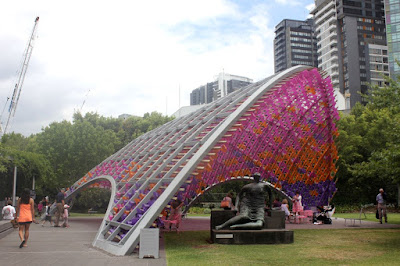 It was a blissfully mild day (in this Melbourne summer where it is a scorching 42 C one day and a wet chilly 19 C the next.)  We went outside to the 2015 Summer Architects Commission by John Wardles Architects.  This colourful structure had tables and chairs under it and looked a relaxing space for a spot of lunch.

I really liked how the Gallery has lunchboxes ($8.50) for the kids.  I ordered one for Sylvia with a cheese and vegemite sandwich, veggie sticks, hummus dip, muesli bar and apple juice.  It seemed perfect for her (in a world where not many lunches at cafes are).  I also bought a similar one for Dash but with ham and cheese sandwich.  And for myself I bought a Vegetable Love roll with roast vegetables, brie, macadamia and pesto ($12).  It all seemed just right. 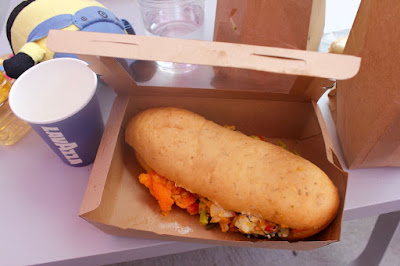 Kids have a way of seeing lunch from a totally different perspective.  Sylvia refused to eat her sandwich because it had butter on it.  The veggie sticks and dip were unavailable so she was given sultanas instead.  The muesli bar was replaced with a smartie cookie.  And the final moment of doom was when Dash dropped his sandwich and the pigeons ate it.  I enjoyed my roll though it had a slight chill to it.  But by then we were rushing out the door because there was much to do so I gulped it down in a hurry.

I highly recommend the Warhol WeiWei exhibition even despite the hefty price of $26 per adult.  I could go back and spend more time looking at images, wandering what on earth the artists were thinking and watching multi media.  I am hoping I might have the opportunity but you never know what life will bring!