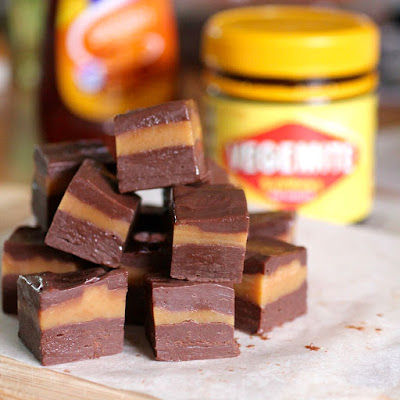 Last night we returned home from a long weekend at the beach in Torquay.  It was glorious to walk in the shallows with the sand between our toes.  On the way home we stopped at my parents' home for a birthday afternoon tea.  Today is Australia Day so I had some fun with our national icon Vegemite and added it to fudge. 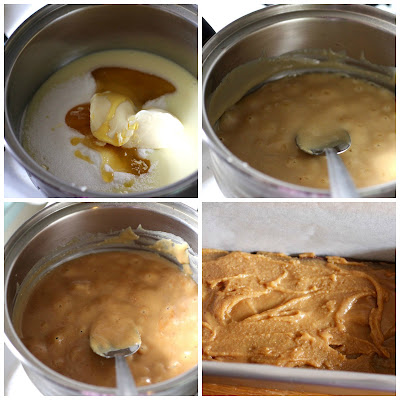 I was inspired by vegemite caramel chocolate, to add a layer of caramel into a chocolate fudge (made of chocolate and condensed milk).  However it was not easy to know how much vegemite to add.  I felt that my cautious quarter teaspoon could have been doubled.  I was happier with my caramel.  I learnt from the caramel for the recent rice krispie slice and tested the caramel on a cold saucer earlier rather than giving it the full 10 minutes other recipes suggested.  It was a bit chewy when kept in the fridge but lovely at room temperature. 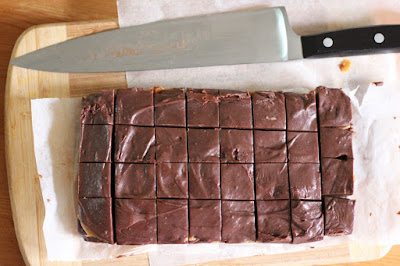 Before we left for our holiday in Torquay, I chopped up the fudge into small squares, wiping the knife between slicing.  Sylvia and I tasted a piece or two and it was addictive.  We wisely dropped it to wait in my mum's fridge before the afternoon tea.  I would not like to say how much would have been left had we taken it to the beach house with us. 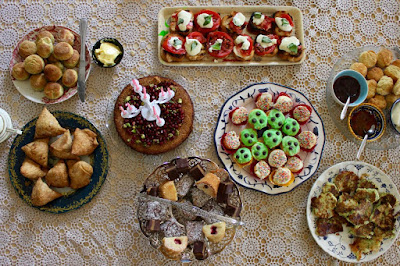 My mum put on an impressive spread for the afternoon tea.  I loved that there were plenty of savoury options - herb scones, samosas, sandwiches, bruschetta, zucchini fritters, as well as lots of sweet options - lamingtons, friands, my fudge, little cakes, scones with jam and cream, and lemon tarts.  I also took down cashew cheese stuffed dates but am not sure which category they fit. 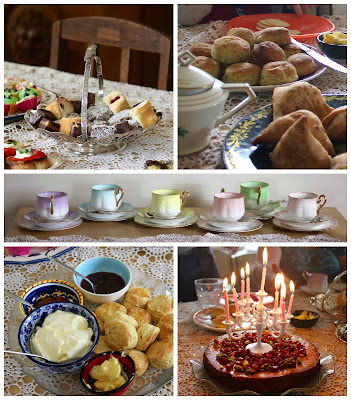 There was also a gorgeous Persian love cake for the birthday cake decorated with pomegranate and pistachios.  We were so full after all the good food.  Luckily we didn't eat much after breakfast and then we just had snacks for tea.  Some of the family then played cricket outside but I stayed inside and chatted. 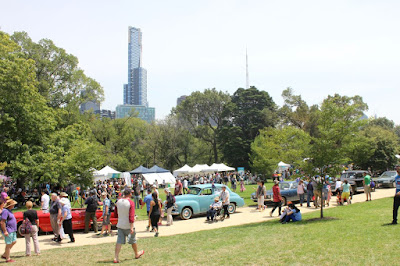 Today back in Melbourne, we headed out to Kings Domain on the fringe of the city for the annual RACV Australia Day picnic and federation vehicle display.  It the place where the Australia Day parade finishes and the crowds enjoy food trucks and activities. 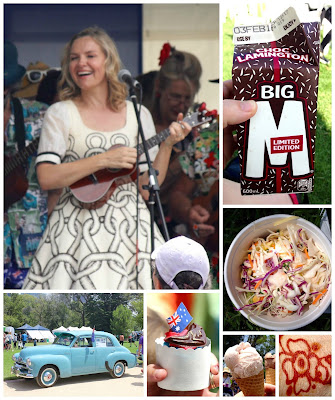 On the way in we were handed free cartons of Choc Lamington Big M (flavoured milk), offered Australian flags and given free sun cream.  I had a baked potato and a chocolate ice cream.  We spent most of our time sitting in the shade at the main stage watching the ukulele group, Justine Clarke, Aussie pub rock classics and hip hop dancers.  I wondered if I could change my birthday when we watched those born on 26 January birthday being treated to cake. 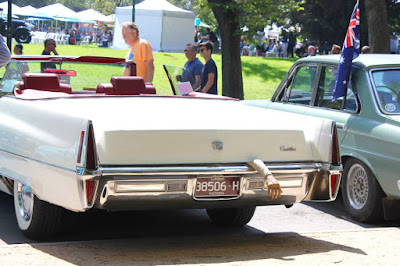 We had a little time to wander around the other stalls.  I would have shown Sylvia how to play totem tennis if it hadn't been so popular.  I was convinced to have a henna tattoo.  And we enjoyed looking at the vintage cars.  The one above gave everyone a start with the [fake] arm hanging out the back.  I asked the owner if he drove around like this and he said he had too many complaints about a body in the boot so the police have ordered him not to do it any more. 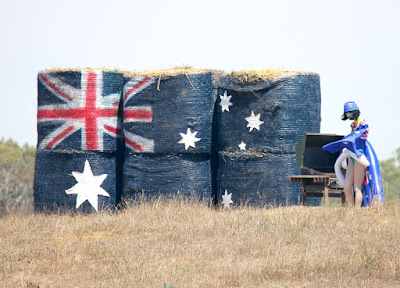 Before I finish this post, I have a few esoteric Australian photos to share.  Above is a group of haybales with the Australian flag imposed on them.  We saw it on the Princess Highway yesterday.  I am always in admiration of vision while driving along country roads and stopped to take a photo. 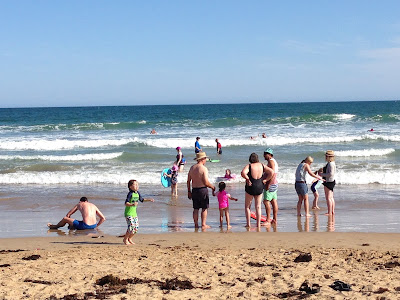 Given that we have just been to the beach, I thought that for Australia Day I would share a quintessentially Aussie picture I took of my family at the beach a few weeks back.  It was my first outing to the beach for the summer and a joy to see how Sylvia enjoyed surfing the waves on a boogie board. 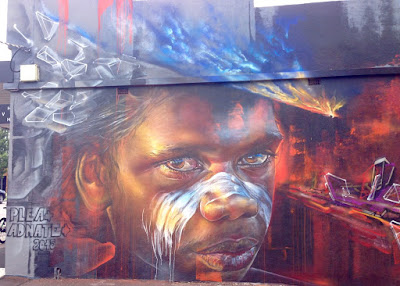 This picture is street art in North Carlton I took late last year.  I wish there were many Indigenous images I had encountered today and I didn't need to dig through my photo archives for a picture.  However though I have been seeing lots of Australian flags around Australia Day, the only Aboriginal flag I saw today was carried by a couple on the train home.  It embarrasses me.

There are Aboriginal events held today.  My friend Heather met us at Kings Domain and said that she encountered an Aboriginal group occupying the Flinders St Station intersection.  However I would love to see Aboriginal Australia incorporated into more mainstream events like the RACV picnic.

I wish I had more space and eloquence to explain why it is sad and harmful when we don't remember Australia Day as a day of invasion of Aboriginal Australia.  Instead I highly recommend you read Chelsea Bond's article The day I don't feel Australian: that would be Australia Day and then if you want to imagine how it would feel to have your land invaded, check out The Conversation's Australia Day film guide listing films in which Sydney has been invaded. 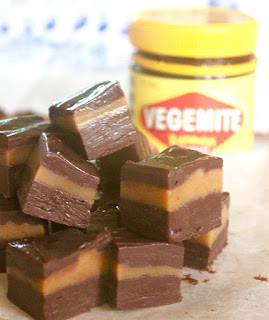 It would be great if Australia Day were a day for all Australians.  And though I want to be inclusive, I happen to know that not everyone embraces vegemite.  There are many who share Amanda Palmer's sentiments against our lovely salty black spread.  However we always tell newcomers it is best used sparingly.

This fudge can be compared to a salted caramel with a slightly deeper flavour.  In fact I was surprised none of my family was horrified when I told them the secret ingredient was vegemite.  If you grew up on vegemite like we did, you wil no doubt love this fudge.  To the novices, I suggest try this fudge and you might just find it is a way to like vegemite.  If you really can't bare the thought of vegemite in fudge, the check out more of my Australia Day recipes.

Meanwhile make the caramel.  Place all ingredients in a small saucepan and bring to the boil on medium heat stirring frequently.  Reduce heat to low and simmer for 5 minutes, stirring regularly.  Check if it has struck the right balance between too soft and too chewy by putting a small drop on a cool plate and checking it once it has cooled (this should be seconds).

Scrape the caramel into another bowl to help cool it.  Leave about 5 minutes and then spread onto the set chocolate mixture.  Return loaf tin to freezer for about10 minutes.  Then melt remaining condensed milk and chocolate and spread over the caramel.

Set in freezer an hour or so and then cut into small squares.  Wipe the knife between each cut to keep the slices neat.  Keeps in the fridge for at least5 days.

NOTES: I added 1/4 tsp of vegemite which was barely discernable so next time I would try more.  However for vegemite novices, 1/4 tsp might be just enough.  I accidentally melted 300g each of chocolate and condensed milk and used about two thirds for the bottom and then remelted the last bit for the topping.  I found that I had about 90g of the 395g tin of condensed milk left for the caramel but luckily had a little extra in the fridge.  However I would measure the 100g for the caramel before I measured the last 100g for the chocolate topping as I think the later is more important to have correct.

UPDATE: Shaheen at Allotment to Kitchen has posted a marmite fudge based on this one.  She used a lot more marmite than I used vegemite so I definitely will next time too.

On the Stereo:
Molly - Do Yourself a Favour - the Soundtrack to the TV Miniseries and Molly's Life in Music - Various Artists
Posted by Johanna GGG at 22:38