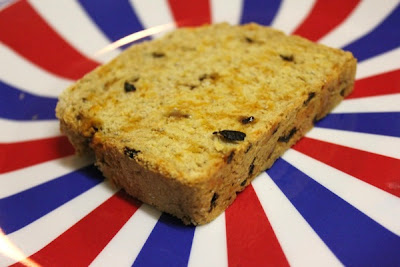 I've been dreaming of baking something amazing for the Queen's Jubilee.  Layer cakes decorated with Union Jacks and bunting.  Victoria Sponge. Battenberg cake. Chelsea buns.  Butterfly cakes, scones and cucumber sandwiches on my tiered cake stand.  Just dreaming.  Instead I made a very simple beer bread flavoured with cheese and onion.  As British as Black Cabs, Bowler Hats and Bulldogs.  E was not sure the bread was appropriate but I think one of the great things about the Jubilee is the opportunity to celebrate all things British. 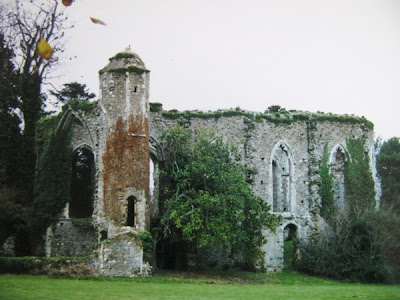 I have mixed feelings about the British royal family.  I believe that Australia should be a republic.  E and his family have always been staunch royal supporters and as I grow older I appreciate the history behind all the traditions.  So rather than talking about the royals I am sharing a few memories and photos of my travels in Great Britain, mainly featuring England. 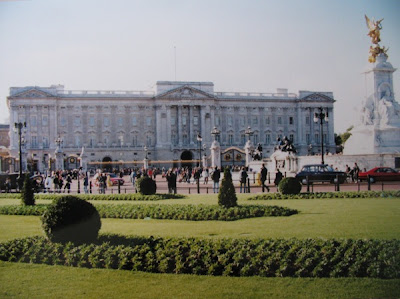 I first spent a few weeks in a London pub with my younger sister Fran who was working there.  I later returned on a working holiday visa.  I loved London.  Arriving in London from Australia, I was agog at seeing streets and stations that hitherto had just been a Monopoly Board to me.  Westminster Abbey, The Geffrye Museum and The British Museum were among my favourite places.

I was surprised at how emotional I found the gates of Buckingham Palace (above) where so many significant historical moments had been celebrated.  In hindsight I regret not doing a tour of the Palace but I was young, defiant and refused to spend my limited pennies in this way.  I did visit other royal sites such as Hampton Court and the Tower of London.  I was more interested in following in the footsteps of the Bloomsbury Group.  The artwork at Charleston Farmhouse (below) is the sort of decor I would love. 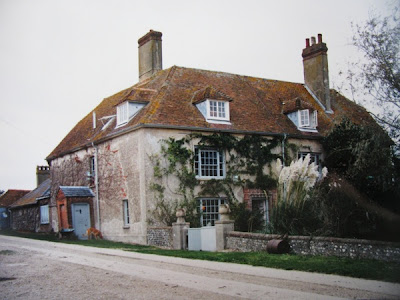 While I loved sightseeing on weekends and working at the BBC website, I never settled and itched to get out of the big city.  I loved visiting the castles, historic houses and ruins.  I travelled across quite a bit of England and Wales before ending up in Edinburgh (but that is another story).  A road trip with my mum and dad, a trip to Wales to see Pulp with a workmate and a trip to Knole House with a friend from Australia are all memorable.  In fact, the last was the only time I have ever had a train pass the station, realise it had missed us and then back up to let us get  on board. 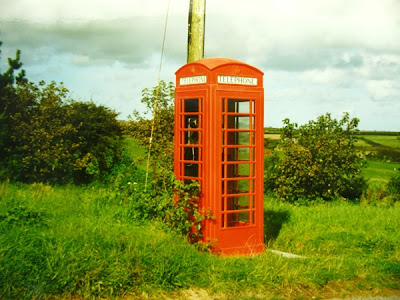 My first impressions of England were with Fran.  She had some funny rules about photographs.  I was told  I had to get photos of telephone boxes.  I wonder if the above telephone box is still there.  (I think it is in Cornwall).  I am very fond of the gentle green British countryside.  Like London, the names all seem familiar.

I was pleased to eat Wensleydale cheese on the Wensley Dale and a Devonshire tea in Devon.  I also fell in love with Cranks vegetarian restaurant in London and the vegetarian burger at Burger King.  Both are sadly no longer but if anyone has the recipe for the amazing Cranks sausage rolls I would be ever so grateful. 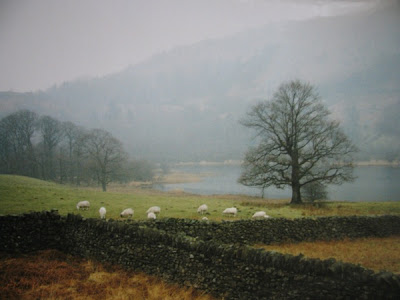 Before I left Australia, I heard how terrible the food was in the UK. We in Melbourne are very proud of our cafes.  What I found in the UK was that people were far nicer to vegetarians.  Pubs offered ploughman's lunches, burgers and lasagna that I could eat.  After living in the UK for a few years, I understood the Aussie attitudes.  Eating out meant that I could always have some vegetarian options but eating at home meant more ready meals and less fresh fruit and vegetables. 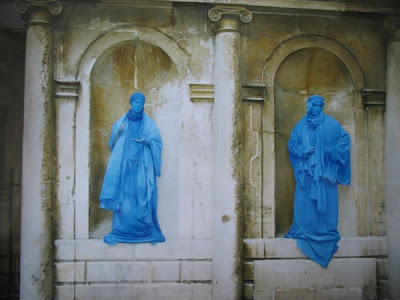 At least there was always Greggs Bakery.  No matter where I travelled I usually encountered a Greggs.  One of the standard items to which I was very partial were the cheese and onion pasties.  I also loved the Real McCoy's cheese and onion crisps.   This was a flavour combination that I didn't find at home very often.  It seems perfect for a nation that excels in cheeses but doesn't do so well with vegetables. 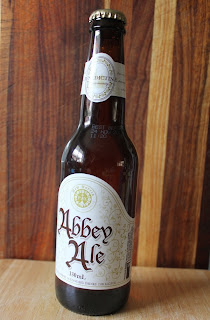 As well as being told to be wary of the food, I was told that the beer in Britain was different.  Naively I went into a pub in Oxford, soon after arriving on my first trip, and asked for a beer.  The bartender asked which beer.  I drew a blank.  The only beers I ever drank were Fosters or VB.  Cold fizzy lagers.  This was before Fosters world domination, before the advent of boutique beers and before beer companies diversified.  It was a most embarrassing moment. 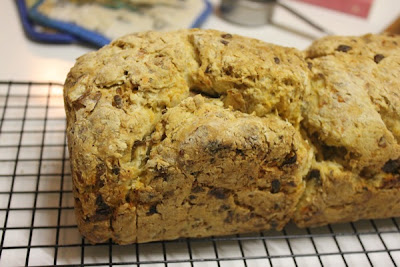 I don't drink beer much these days and am still not very wise about different types.  I almost wish I did, just so I could collect beer labels.  They are just so artistic and amusing these days.  I decided to make this beer bread when my computer was down weeks ago.  I couldn't find a favourite recipe in my cookbooks but found another one and decided to add fried onion, roast potato and red leicester cheese.  It was a bit dense as I miscalculated the beer and the baking powder, the potatoes didn't add anything but stodge, and it needed salt. 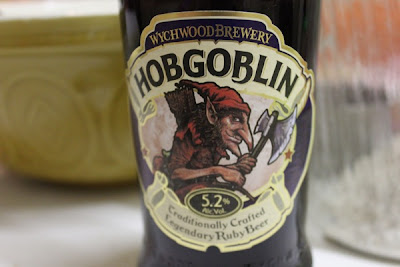 I decided to try again and tweak the recipe.  It was an opportunity to buy another bottle of beer with an entertaining label.  Fittingly the Hobgoblin beer is from Oxfordshire in England.  It is far darker stronger stout (the label says it has chocolate and toffee tones) than the Abbey Ale I used in the first version but both work well in the beer bread. 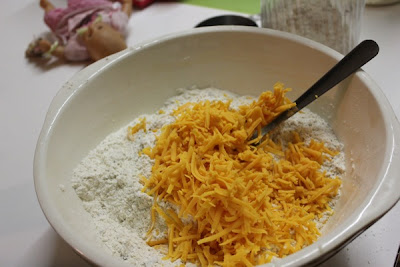 I had first bought the red leicester cheese at the Vic Market but then I found it in the supermarket.  It is a rare treat for us.  E found it very pleasing.  Sylvia said it tasted like medicine.  I asked her if it was good or bad and she said good.  She seems to enjoy it. 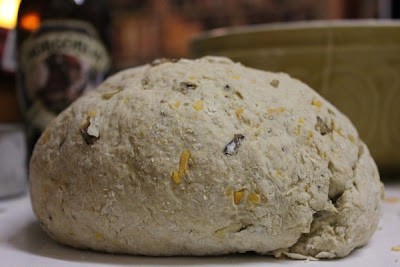 I dithered and dillied over making the bread, stopping to help Sylvia make sea monster arms for dolly and help her find beads on the floor and watch her swimming in the bath.  I probably stopped and stared into space too.  This time the dough felt better and I was happier with my loaf of bread.  It was craggy, dense, tasty and dotted with sweet nuggets of fried onion. 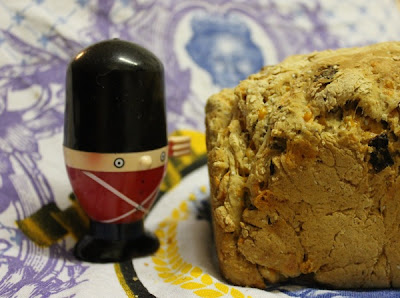 Once the bread was baked, there was only one thing to do before eating it for dinner with minestrone.  Find some British paraphernalia to photograph with it.  You would think with the amount of time I have spent in the UK that I would have some things.  Nothing to be found.  The only Union Jacks in the house are on the Fortunately E has a Jubilee tea towel and I found a little soldier egg cup.  Then I remember my blue, red and white plate.  More mod than monarchical, it wasn't a Union Jack but it would have to do.

Now that I have celebrated the Jubilee, can we please have an extra days leave in Australia when we have our Queens Birthday holiday next weekend? (Or maybe we need to do away with our Queens Birthday Holiday and celebrate Mabo Day instead - today is 20 years since since the Mabo High Court decision!)  Below I finally celebrate the poetry, profusion and occasional pomp of British food with some links:

Also see my Jubilee and UK Food Pinterest Board for more ideas.

Fry onion in oil until browned with some charring around the edges.  I think I took about 20 minutes starting on low heat while I did other things and then I turned the heat up when I got impatient.  Mix fried onion with other dry ingredients.  Add beer and mix until you have a stickyish dough.  Briefly knead on a floured board.  Place in a greased and lined loaf tin (as I did) or on a baking tray.  Bake at 200 C for about 50 minutes (I baked mine at 210 because my oven's thermostat is a bit dodgy).

* NOTE: Beer bread recipes seem to be made for a standard bottle of beer to be poured in but I find that bottles are not such a standard size any more.  When I first made this I added a 300ml bottle of beer and then topped it up with water.  The second time I had a 500ml bottle and had to measure it with cup measures and scrape the foaming head off to check I had enough beer.

On the stereo:
Son of Evil Reindeer: Reindeer Selection
Posted by Johanna GGG at 23:18