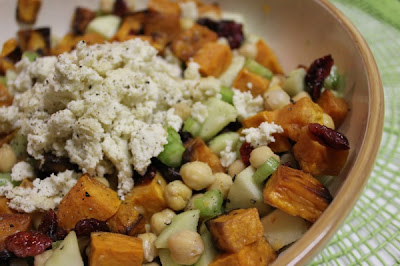 Now that I have told you all about limes, here is one of the recipes I made with my limes.  Not a great success.  Great ingredients.  Just a fail in seasoning.  With a bit of tweaking of the dressing (or maybe trying this lime vinaigrette) and a some hot weather and vegie burgers, I am convinced that I would love this sweet potato and chickpea salad with almond feta and lime. 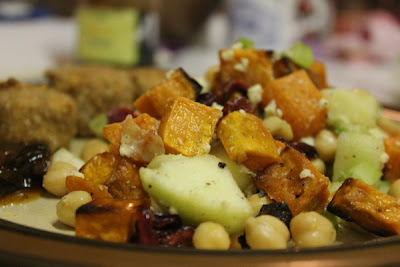 I served the salad with tofu nuggets the first night and enjoyed it but E wasn't so keen.  The next night I made a total mess of it by mixing it with some rice.  Despite my ambivalence towards this salad, I quite liked the photos.  It's one of the ironies of food blogging that ultimately we are making food to taste great but we mainly stimulate your tastebuds through another sense - the eyes!

With this in mind, I thought I would share a few more photos from the weekend and reflect upon Pinterest.  We went to Fitzroy Market and met my friend Heather.  We enjoyed looking at all the trash and treasure.  Sylvia had to have a button and I was pleased to find a pair of Clarks shoes for her for a mere $5.  Last time the only takeaway food stall was the bbq with (veg) sausages but this month there were stalls with soup, cupcakes, (veg) sausages and slices and cakes.

After the market we had a lovely long late lunch at the Gasometer Hotel (more on that soon).  Then we came home and both E and Sylvia went to bed and I had almost half an hour to myself before Sylvia woke up again.  E slept through until morning! 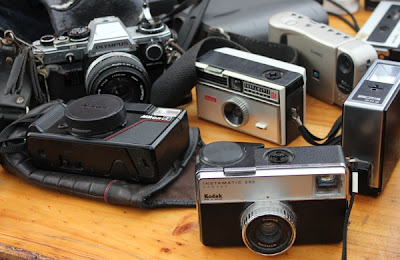 Among the treasures for sale at the market were these wonderful old cameras.  They remind me of cameras I have known and those I wish I had known.  I really wanted to buy one but I had to resist because I have neither the use nor the room for such memorabilia.  So too, Pinterest fascinates me because it is so much about capturing images.  For practical use?  To just admire?  I gather that, other than recipes to recreate, many people like the visual references to help plans events, renovations and parties.  I suspect some of us just like to gaze and sigh at beauty. 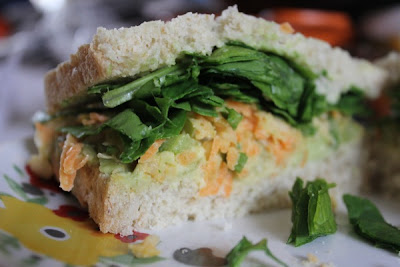 I have been thinking about this because I set up my own Pinterest account recently.  I love the concept of creating pinboards of images.  I have previously referred to the copyright issues which have created concern among users.  It has made me wary about what pictures I pin.  Pinterest is exciting and scary because it has such promise and yet it still is not quite in good enough order for complete comfort.

Pintereest is even in my dreams.  Recently I dreamt some bad men were after me and I hid in a book as a Pinterest bookmark!  It fascinates me and is a time waster and a mystery.  I think that I just see what the people I follow are looking at when I go to pinterest.com now.  (Can someone tell me if this is correct or if I should be seeing followers updates in other ways?) 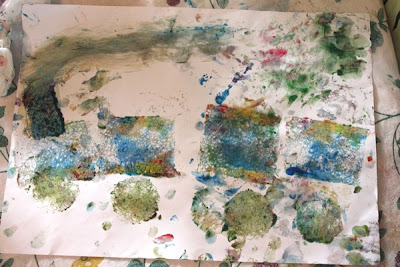 Yet despite my love of pretty pictures, I also love words - as must anyone who has read this far.  An image doesn't quite tell me what is in the above sandwich (spinach, mock tuna salad and avocado) or that I was very proud of Sylvia when, after doing some painting together, she created the above one all by herself.  Pinterest has space for some text but it is frustrating.  It destroys the aesthetic if people write too much and if I am not alert enough to edit text when repinning, I find it puts others' words in my mouth.  So I am enjoying Pinterest but with caution.  I'd love to hear what you think of Pinterest.

Now I will send this salad to Jacqueline for No Croutons Required (with a theme of leafless salads this month) and go back to marvelling at having felt the couch move in Melbourne's mini-earthquake and pulling my hair out over the Australian journalism crisis.  Then I might just do a bit of pinning and repinning.

Previously on Green Gourmet Giraffe:
One year ago: WHB: Banana Oat Pancakes
Two years ago: SOS Beetroot and rhubarb soup
Three years ago: What does home mean to you?
Four years ago: Choc Honey Muffins
Five years ago: Guinness Chocolate Cake for Bloomsday

Roast sweet potato tossed with olive oil and salt at 220 C for about 1 hour or until soft  when pierced with a fork.  Mix with remaining ingredients.  Make lime dressing by whisking all ingredients together with a fork and toss through salad.

On the stereo:
Kraut Rock - Various Artists
Posted by Johanna GGG at 23:37