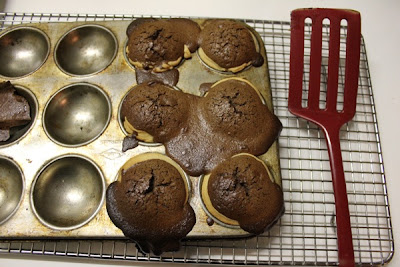 I told you yesterday about my chocolate tarts disaster.  So here they are as I found them straight out of the oven.  What a waste of all that lovely filling!  Pastry has never been my strength in the kitchen but I really shouldn't have attempted to bake with it on a day when anything that could go wrong did go wrong.  I wouldn't be sharing this at all except that I actually liked them the next day and think there may be some potential in the recipe. 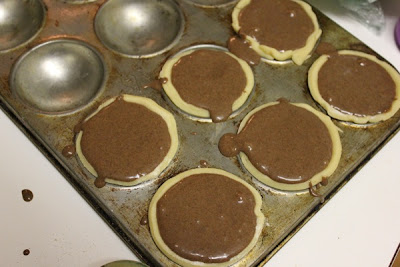 I had some leftover pastry and leftover condensed milk and got a notion into my head to make chocolate tarts with it.  I was very tempted to adapt this Creamy Peanut Butter Pie, if only because it was such a sweet story of a wife making it to remember her husband Mikey who died suddenly.  But I kept being intrigued by Minnie's Chocolate Pie made by Katie at Apple and Spice.

However I take all the blame for the disaster.  Katie did warn readers not to substitute condensed milk for evaporated milk.  But condensed milk is just sweetened evaporated milk and I really wanted to make the pie to use some of my leftover condensed milk.  And to eat chocolate!  I then swithered over baking times and filled the pastry cases too much.  I knew they were too full but I wanted to use all the filling.  Which dripped all over my oven as well as the fairy cake tins. 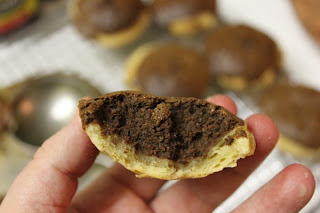 My pastry was nicely cooked and even a little flaky.  The filling, however, lacked the sticky sludgy smoothness of Katie's photos.  Maybe I should have made the large pie rather than individuals.  My pies were almost cakey.  They were even a bit tasteless straight out of the oven.  The next day we loved them.  These are pies that are far better cool.  They are also very portable if you just so fancy one for morning tea at the office.  All in all, these were not a bad disaster (unless you had to do the washing up).

1 heaped tbsp butter (I used margarine), melted
100ml condensed milk
3 tbsp cocoa
1 egg
pinch salt
1/2 tsp vanilla (I didn't use but might do if I did this again)
Pastry - I think I had about 1/3 of this yoghurt pastry

Roll out pastry and line some muffin tins (next time I would use deeper holes like muffins rather than in the tin I used).  Mix remaining ingredients together and spoon into pastry cups, leaving some room at the top for the filling to expand.  Bake at 200 C for about 30 minutes.  (I think the filling needs less time, I am not sure if the pastry would be ok with less time.  I toyed with blind baking but I wasn't sure.)

On the Stereo:
The Bestiality of - The bonzo dog doo-dah band
Posted by Johanna GGG at 23:43