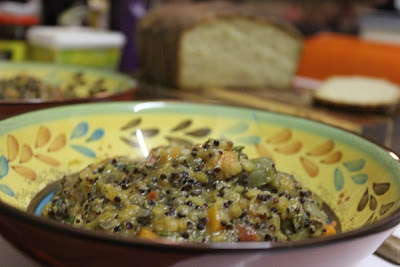 I love when bloggers share simple every day recipes.  I love it even more when I can tick off the ingredients against what is in my kitchen.  So it was that I found myself making K's favourite Lentil Quinoa Stew recently.   It went down very well, even with some of my quirky changes (was the mustard too sharp?  would a spoonful of tahini have helped?).  My main complaint was that it only served 2.  When I make it again I will increase the quantities because it is just the sort of stew that keeps well for leftovers. 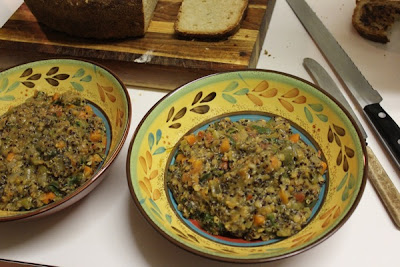 I haven't used much quinoa lately.  I was glad to use up the black quinoa and suspect that it gave the stew quite a different look to K's photo.  As we ate dinner, I was surprised that E had heard of quinoa.  Not from hanging around food blogs.  That isn't his scene.  Surprisingly he knows of it because one of his favourite Kraut rock bands, Tangerine Dream, have a CD called Quinoa.

Fry onion in olive oil in a medium saucepan until translucent, stirring occasionally.  While it is frying, cut up celery, carrot, green pepper and garlic and add to the pot as they are done.  Stir for about 5 minutes once the vegies are in the saucepan.  Add the stock, lentils, quinoa, oregano, mustard, chilli past, salt and pepper. Bring to the boil, then reduce heat. Cover and simmer for 20-25 minutes or until lentils are tender.  Blend about half the soup (I briefly blended with a hand held blender so it wasn't all smooth).  Stir in tomato, lemon juice, parsley (or spinach), nutritional yeast flakes (and tahini).

On the Stereo:
Cosmic Jokers (self titled)
Posted by Johanna GGG at 20:59