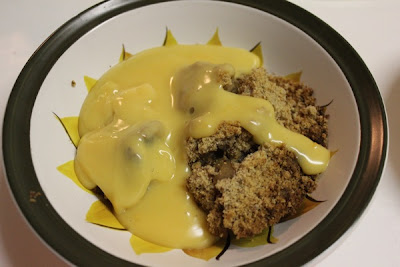 Last week when we were driving home, Sylvia asked if we would be home soon.  "We just need to drive past the lions and dragons," I told her.  It made me smile.  The lions are on gateposts and the dragon is on a gable.  Yet I loved how it sounds like we are in a children's story book.

I love the wonder in a child's view of the world.  This week when I hung out the washing (in a brief reprieve from all our recent rain), Sylvia was watering the plants.  I told her it was called mint.  "Do we make mint pie?" she asked. An odd comment.  Then I remembered I had made mince pies recently. 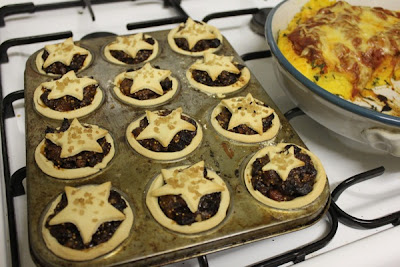 The fruit mince is leftover from Christmas baking.  I am quite impressed that my mince lasted so long.  (The last bit of pudding in the fridge went mouldy I regret to say.)  I chanced upon this recipe for Delia's Apple, Almond and Mincemeat Crumble. It was just the way that I fancied using some mince.  I used a lot more than Delia and loved how it made the apple taste special with all the spices, fruit and nuts that are in my fruit mince.  I made it while Sylvia had her bath. 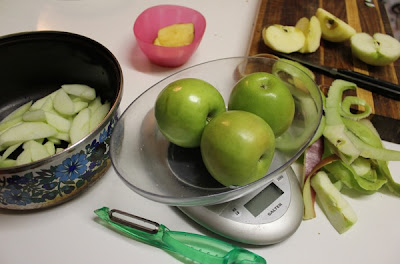 The apple and mince crumble was a great idea.  I wasn't too sure about the crumble topping at first.  I prefer an oaty crumble topping.  I decided to cut corners and used ground almonds.  Next time I will use finely chopped almonds for more texture.  I also misread the recipe and used plain rather than self raising flour.  The crumble mixture was more like sawdust than clumps and I was glad I had made less than the recipe suggested as there was plenty. 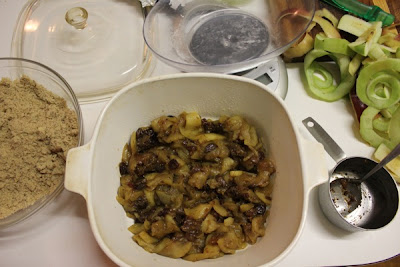 Once the crumble cooled it was like a slab of biscuit on the apple mixture.  E was not keen, Sylvia was ambivalent but I loved it in small amounts microwaved after a meal.  I still have some fruit mince left.  The mince tarts were good but I want to try another batch with a different pastry.  Stay tuned...

I am sending this crumble to Simone of Bricola who is hosting this week's Weekend Herb Blogging #339, the weekly event coordinated by Haalo and founded by Kalyn.

custard or cream, to serve

Peel, quarter, core and slice apples.  Cook apple slices with a spoonful of brown sugar in a medium saucepan - bring to the boil and simmer about 10 minutes or until apples are just soft.  Stir in fruit mince.  Spoon into a medium baking dish (mine is about 23cm squared).

To make crumble mix flour, ground almonds, cinnamon and brown sugar.  Rub butter into flour mixture.  Press crumble on top of the apples then run a fork over the top to rough it up a little.

Bake for 30-35 minutes at 200 C until golden brown.  Keep an eye on it as mine became quiet brown in 35 minutes.  Ours kept almost a week in the fridge and was delicious heated in the microwave but we had it with custard on the first night.

On the Stereo:
Junior choice, volume 2: Various artists
Posted by Johanna GGG at 23:01