The Gasometer Hotel - a little neofolk, a little vegan 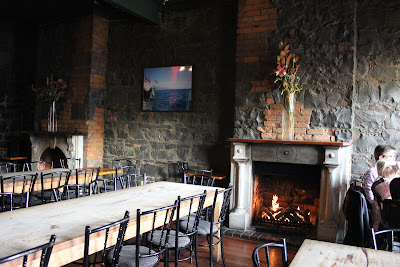 The Gasometer Hotel closed November 2013
It has since reopened but with a different menu that lacks that amazing veg meals it had.

Last Saturday I spent the afternoon in the pub.  I've read a lot about the amazing vegan food there, then I saw the picture of the Gasometer Hotel on Where's the Beef and Mel remarked on the the promise of pierogis on the specials menu.  We had met my friend Heather at the Fitzroy Market and strolled down Smith Street to the pub for a late lunch.  It looked deserted and closed.  But the door was open.  Let's just say we had our pick of seats. 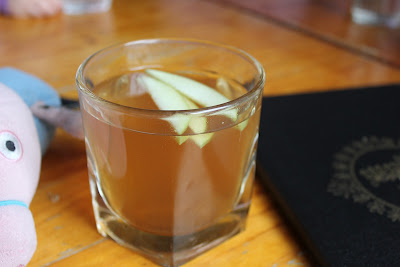 We settled by the window in front of a roaring fire and spent some time pouring over the extensive menu.  We were impressed by the Eastern European theme.  A little bit Neofolk, said E, as the Sisters of Mercy played on the stereo.  The menu was quite unusual for Melbourne.  I hadn't expected so much choice.  The pierogis had stiff competition.  I considered the borscht, broccoli leek and spinach pancake, German winter strudel and mushroom schnitzel.  Finally I decided on the pretzel and the cabbage rolls.

We ordered at the bar where I saw that an apple hot toddy was on offer.  It had apple cider, apple schnapps, whiskey, brandy and goodness knows what else!  I am not much of a drinker but warm winter drinks are just my sort of thing.  Especially when sitting in front of an open fire.  Heaven! 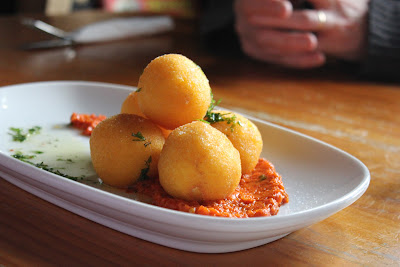 Heather chose the Cheese Stuffed Mamaliga Fritters with a paprika based relish.   They arrived quite some time before our meal.  I've never heard of Mamaliga before but have since read that it is like an Eastern European version of polenta.  By the time I sampled these they had cooled considerably and I didn't think to take some sauce.  They seemed rather bland but Michael loved his, so I think hot and with sauce must be the way to eat them. 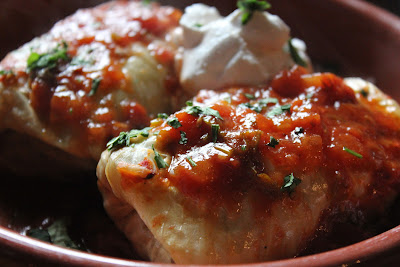 I chose the Cabbage Rolls stuffed with mushrooms, herb and rice and served with tomato sauce and sour cream.  I liked these but they didn't wow me.  They were quite hearty and tasty but I think I found the cabbage a bit overwhelming.  I had decided on a small plate of these to include more vegetables in my meal and to leave room for a freshly baked pretzel.

The pretzels were amazing.  Huge knots of bread bigger than my hand, warm out of the oven and served with a tasty mustard butter.  I think I am right in saying that it is unusual to find freshly baked pretzels in Melbourne.  It was a rare treat. 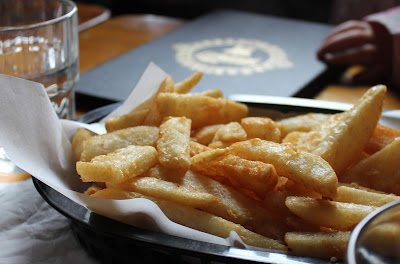 Sylvia was predictable and ordered the chips.  They were excellent.  Crispy, hot and fluffy inside.

E surprised me by ordering the Tempeh Paprikash.  Tempeh chunks marinated in apple cider, caraway and paprika, served in a creamy paprika sauce on a bad of noodles.  It was very good.  The tempeh worked really well here.  The noodles were thick and almost chewy, which worked fantastically with the creamy sauce. 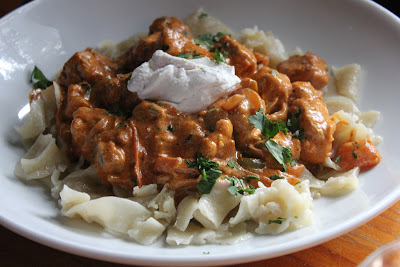 We were rather full after dinner but enjoyed chatting in the convivial surroundings.  After a bit we were ready to tackle dessert.  Unfortunately they weren't ready for us.  E would have liked a coffee but they did not serve those sort of hot drinks.  The service was rather slow.  Not even a reminder could hurry them, and the other tables were filling up.  Fortunately we were happy to while away the afternoon by the fire rather than head out into the rain. 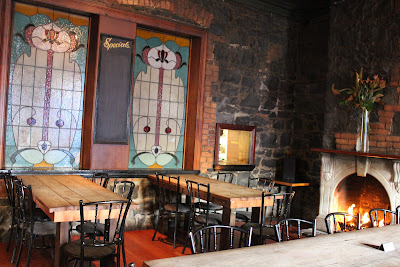 Finally E's dessert arrived.  Again he ordered off the specials menu.  The doughnut balls in a gingerbread mocha soup.  I rather liked the way the soup was served in a mug with little wooden forms for the dipping the doughnut balls.  The doughnut balls were nice but I have had better.  Sylvia enjoyed them.  When I tasted the soup, all I could taste was coffee (despite E telling me there wasn't much coffee in it).  So I suggest, unless you dislike coffee as much as I do, you take E's word that it was rather good and a bit like a hot chocolate. 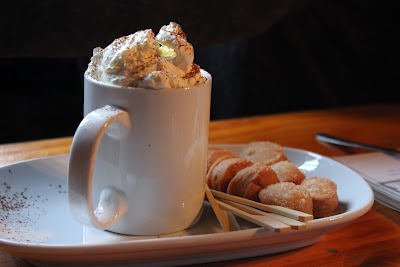 Heather and I had decided to share the Black Forrest Molten Chocolate Pudding which came with cherry and vanilla ice cream and a spiced cherry compote.  The name of the pudding let it down.  It was more like a warm chocolate cake than anything molten.  Names aside, the combination of chocolate cake with the creamy ice cream and wintery spiced compote was very good. 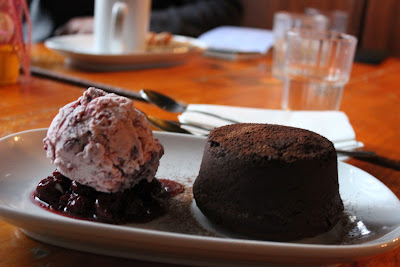 Despite a few lowpoints, I was very impressed with the Gasometer Hotel.  The menu is full of temptations (I hope that maybe the pierogi stays on the specials awhile so I can sample it another time), caters to a range of dietary requirements (lots of vegan and gluten free dishes) and is very pretty (see below picture).  It was not a cheap lunch but I felt like we were served good food.  The servings are generous, hence Mel renaming it the Bloatometer.  By the time we left the place was full of punters and Joy Division was no longer on the stereo. 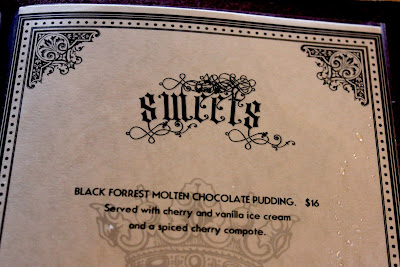 I only remember the pub as an Irish pub - variously called Irish Murphy's and Father Flanagans.  So I was interested to read that the current owners have returned it to the original name - The Gasometer - that was used from its opening in 1861 until 1997.  The building reflects an appreciation of history.  Its spacious rooms exude heritage charm with the lead light windows, bluestone walls and open fireplaces. Just the place for a winter's afternoon.


The Gasometer Hotel closed November 2013
It has since reopened but with a different menu that lacks that amazing veg meals it had.
Posted by Johanna GGG at 22:26