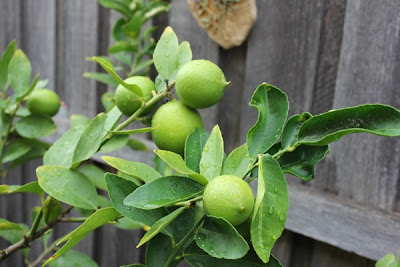 "It is a wonder that the lime, with its abundance of acid and only 1 percent sugar, managed to propagate itself at all before the invention of the cocktail, especially because it stays an invisible camouflage green."
from The Man Who Ate Everything by Jeffrey Steingarten 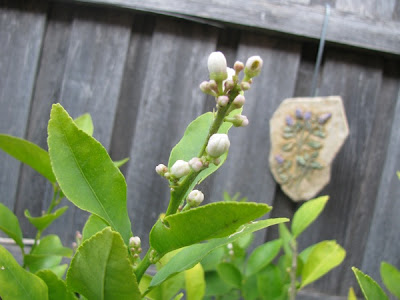 Last week Sylvia and I made limeade (recipe at the end) with some of the limes from our tree.  It seemed an excellent opportunity to feature limes.  It was a wee bit confusing because not only did I have to disregard the colour and the products of limestone, but also I found that often lemon and limes are written about together.  (Probably not surprising seeing that their names come from the same Arabic word - "limun").

What seems clear is that when compared to lemons, lime juice is sharper and more aromatic.  They flourish in the tropics.  Which explains why they are so important in the South East Asian, Mexican and Carribbean cuisines. 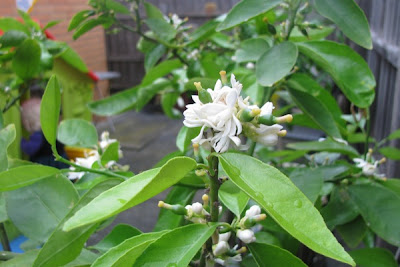 Lime history
Further confusion was encountered in seeking the history of limes.  It seems there are different species and it was sometimes hard to work out which was being referred to.  The Mexican/Key Limes origin seems to be agreed as South East Asian, probably Malaysia or Indonesia.  The origin of the Persian/Tahitian Limes is variously referred to as The Orient, India, and Persia.

It is clearer that the lime has travelled widely.  It appears to have been brought to the eastern Mediterranean and African countries by the Arabs in AD 1000, and to Western Mediterranean countries by Crusaders returning home in the 12th and 13th Centuries.  There is some evidence that lime seeds were taken to the West Indies in 1493 by Christopher Columbus.  The Portuguese took the lime to Brazil.  It was first grown in large quantities in Persia and commercially in Babylonia (today known as Iraq).

Mosaics of lemon and lime trees have been found in remains of Roman villas.  The first mention of limes in Western literature was apparently by Sir Thomas Herbert (Travels, 1677), who spoke of finding "oranges, lemons, and limes" on the island of Mohelia off Mozambique. 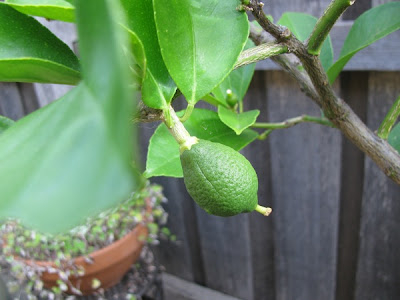 Lime seems to star most brightly in British history in preventing scurvy (caused by lack of vitamin C) in sailors.  Despite lemons having more vitamin C, lime juice seems to have been used more.  I found two reasons.  Limes grow better in the tropics and when ships passed through such areas, limes were easier to find.  Another site claimed that the Mediterranean countries that grew lemons were often at war with Britain so they would turn to colonies that produced limes.

Whatever the reasons, in 1867, the Merchant Shipping Act was passed, whereby all vessels, Royal Navy and Merchant, were required to carry lime juice for a daily ration to ships' company.  In the same year Rose's lime juice cordial was patented and the next year the first factory to produce the drink was established in Edinburgh.  British sailors were referred to as Limeys.  The Limehouse areas of London's docks was named from warehouses that stored limes which were brought from the West Indies.

Following World War I the Tahitian lime became a well-established commercial crop in America. There was market resistance at first because it was seen as a “green lemon.”  Today it is more common than key limes in America. 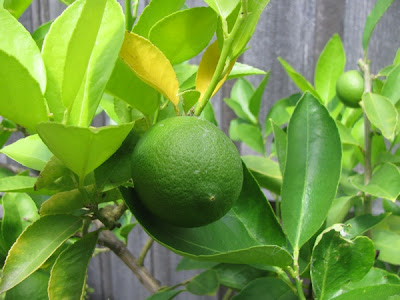 Limes in Australian History
When I thought of my memory of limes two things came to mind.  The first was lime spiders, which contain neither fruit nor insects.  The second was an Aussie folk song called Lime Juice Tub.  I've always loved the line "With a ra-dum ra-dum rub-a-dub-dub / Send him home in a lime juice tub".  Now that I have started looking into lime history, it makes a lot of sense.

School children in Australia were taught about Captain Cook overcoming scurvy by having limes available.  Less well known is that the First Fleet brought lime trees with them from Brazil en route to Sydney Cove in 1788.  According to George B Worgan they didn't flourish.  In The Sydney Gazette and New South Wales Advertiser in 1824, limes are noted to be part of the diverse horticulture and Persian limes are noted to be a recent introduction (despite my understanding that it was Tahitian or Persian limes brought to Australia in 1788).

In the Cook's Companion, Stephanie Alexander says that the main season for limes in Australia is Autumn (which is odd as my tree produces twice a year) and that the Mexican lime is rarely seen in Australia.  She also discusses the native limes that are being developed as a commercially available fruit.  Finger limes and other bush limes have been used as a food by Aboriginal people for thousands of years but many of the trees were cleared as part of the European settlement. 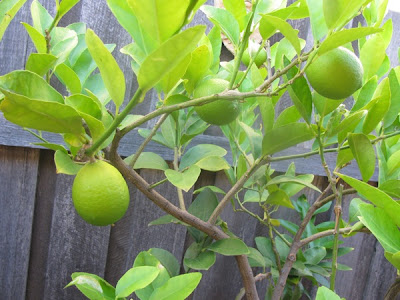 Limes in music, film and literature
Limes are so often a support act rather than the star in recipes that perhaps it is no surprise to find that I had to think laterally to find much relating to them in the arts.

Perhaps the best known song featuring lime is the Harry Nilsson song Put the Lime in the Coconut (which I know from a Muppets version).  There is also a Canadian 1980s synth-pop band called Lime (who I had never heard of) and an Aussie band called the Lime Spiders (which comes from a drink that I have already noted has no fruit in it).  Nick Cave had a song called Lime Tree Arbour and the Beatles sang 'Oh dirty Maggie Mae they have taken her away / And she never walk down Lime Street any more'. 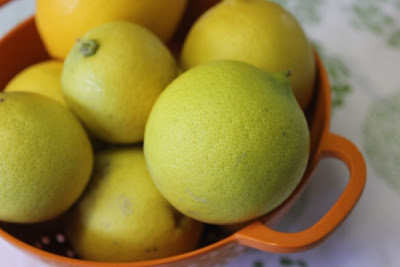 In film, many of us know of Harry Lime, a character in Orsen Wells The Third Man.  He also appeared in radio program The Adventures of Harry Lime.  Even more obscure is The Limejuice Mystery of Who Spay in Grandfather's Porridge, a 1930s British marionette film with Herlock Sholmes as the detective.  And, to draw an even longer bowl, the BBC made a number of shows at The Lime Grove Studios.

Limes in early literature include a reference to an Egyptian lime in the Tales from th Arabian Nights and an obscure eighteenth century Scottish poet James Thomson who wrote about 'the piercing lime'.  Samuel Taylor Coleridge wrote a poem called 'This Lime-Tree Bower my Prison'.  Apparently pickled limes were popular in nineteenth century Boston.  Amy in Little Women pines for them.  Many poets including e e cummings, Pablo Neruda, and William Butler Yeats refer to limes in their writing. 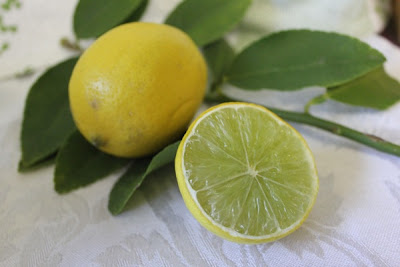 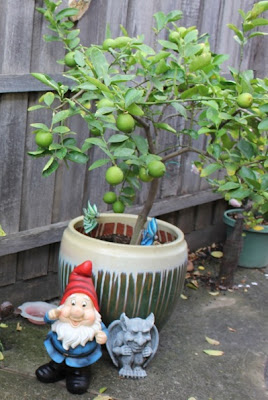 My lime tree
We bought a lime tree in a pot for our small garden in 2007 and it was a wee scrap of a tree.  It didn't yield any fruit until last year.  Just a few limes.  This year the tree hung with many limes (maybe 20).  I find it hard to know when limes are ready to pick.  They are green so long.  Mostly I pick them when they are yellowing.  Inside they are still green.  Fortunately our Meyer lemons are so glossy and bright yellow we can tell which are limes and which are lemons quite easily.  The photos in this post show the growth of limes on our tree from buds through to cut fruit. 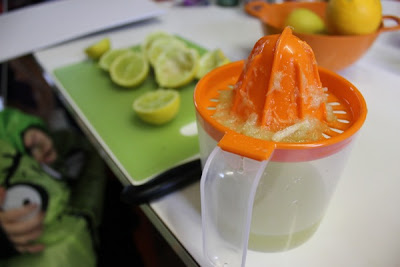 Limeade notes
I made limeade last week because we had lots of limes on the tree.  Squeezing the lime juice filled the kitchen with a wonderful fragrance.  It took more limes than I expected to get a cup of lime juice.  Sylvia decided that she would cut the limes for me.  She was constantly trying to catch me off my guard so she could grab the knife and cut a lime at an odd angle, whether we needed it or not.  We both loved the drink.  E was less keen and puckered up his lips when he tasted it.  I imagine this would be wonderful ice cold with mint leaves in summer.  Alas it is winter.  However, while we aren't after drinks to refresh us from hot weather, we are getting to a time of year when fresh fruit is declining and I am happy to enjoy it any way I can. 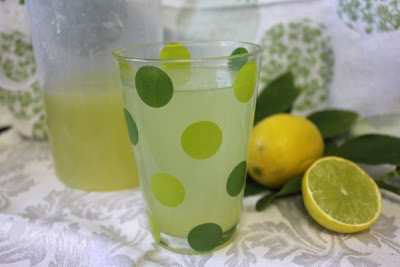 I am sending this post to Jyoti of Pages who is hosting an event called Cool Summer Sips.

Recipes featuring lime on my blog:

Place water, sugar and zest in a small saucepan and bring to the boil.  Remove from the heat and strain out the zest with a fine sieve.  Add lime juice and cool.  Fill 1/3 to 1/2 of a glass and top up with soda water.  (It depends on how strong you like it.  I preferred 1 part lime cordial to 2 parts soda water.)  If desired, serve with mint leaves and ice blocks.