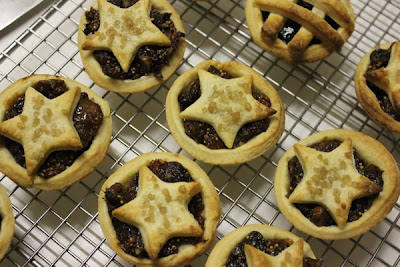 It was a busy baking, kiddie, fishy, woolly, chippy weekend.  I have photos to share and a couple of easy recipes using a tub of yoghurt.  First up is some mince tarts that I made using Brydie's brilliant yoghurt pastry.  I am still unsure if it is the pastry for mince tarts.  Perhaps a more buttery pastry, but this pastry was so easy to handle and tasted so good  When I ran out of my mincemeat I filled the last few with jam and topped with a psstry lattice.  Both Sylvia and E preferred the jam tarts.  Even my dad found the figs in the mince a bit much.  I loved them and so did my mum. 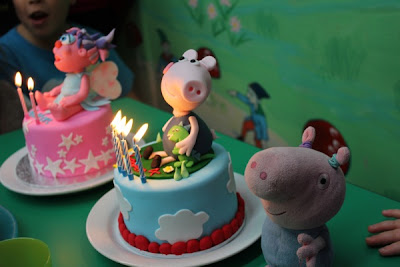 We went to a party for my little niece and nephew on Saturday.  It was filled with kids, squeals, colours, slides, bouncing, red cordial, meaty finger food, fairy bread and cakes.  Aren't the cakes impressive.  Sylvia's George pig was very impressed that one of the cakes was made in his likeness for Cooper.  I didn't catch the name of Ashton's pink cake but it was very cute. 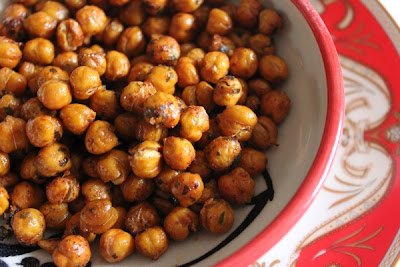 At home I decided to make a snack of roasted chickpeas, using salt, dried wild garlic, maple syrup and oil.  I followed Mel's advice and cooked them a lot longer and added the seasoning about 10 minutes before they were ready.  They were far more crunchy than ones I had made before - though the seasoning was less noticeable.  Just what I needed after the kids party food.  You will see more dried wild garlic on my blog soon - it is a generous gift from Kath. 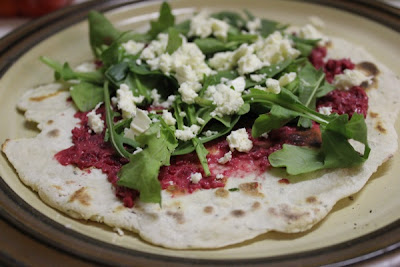 That evening for dinner we had Yoghurt Flatbreads.  I borrow Sam Stern's Eat Vegetarian from the library months ago and really liked the sound of some of the recipes.  One was Fast Turkish Pizza.  It is a flatbread made of flour and yoghurt that is fried and bunged under the grill.  I used dried wild garlic instead of cumin seeds and chose to just fry both sides and roll it up like a wrap. 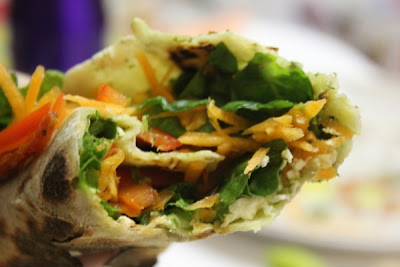 I loved this flatbread.  It was quick easy and delicious.  The first one had beetroot dip, feta, spinach and rocket.  The second had pesto, spinach, rocket, grated carrot and chopped red capsicum.  I reckon this would be a great meal in summer.  I was all set for some blogging on Saturday night but got distracted by Woody Allen and Annie Hall on the telly. 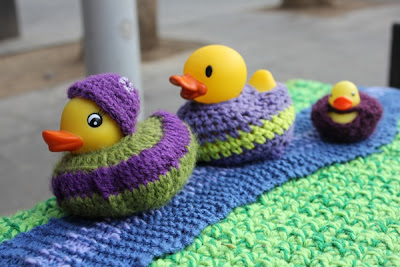 On Sunday I met Lisa for coffee at Andres.  Lovely to catch up and to be able to take my camera to the yarn bombing in the Wild and Woolly exhibition.  I love these three little ducks in knitted cosies.  Knitting and crochet adorn seats, trees, lamposts and bike hoops in the Victoria Street Mall in Coburg.  My sort of streetscape! 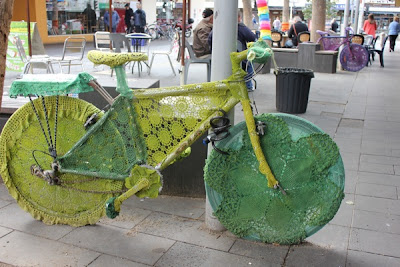 Actually I have my own little knitting project at the moment.  I am knitting a scarf for Sylvia.  It is slow going.  And I am worried I will run out of wool before it gets long enough.  But I enjoy knitting.  It is quite relaxing.  We went to the Aquarium on the train and I took my knitting with me.  While knitting in the cafe I even was asked a question about knitting by a fellow knitter.  Of course I didn't know the answer! 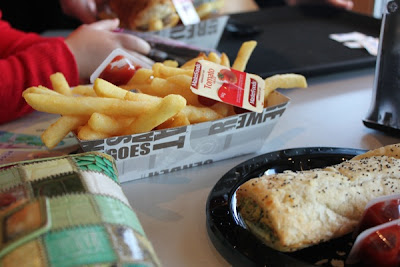 Lunch at the Aquarium cafe was pretty ordinary.  (Why don't tourist attractions in Melbourne do better food?)  Spinach and ricotta roll and a few of Sylvia's chips.  At least the view over the Yarra River was pleasant and there was a huge fish tank in the middle of the cafe that was fun to watch with Sylvia. 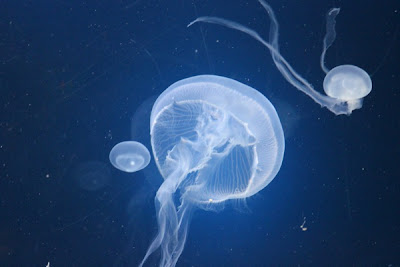 I took my camera and came away with a lot of blurry photos.  Those fishies never stop moving.  The jellyfishes (above) were mesmerising to watch.  The penguins were so cute.  The seahorses were strangely beautiful.  Sylvia just wanted to see the sharks.  Once she had walked through the shark tunnel she was happy to run around like a madman, stopping only to hold a starfish.  The aquarium was full of interest but it was so expensive that I doubt we will be back in a hurry. 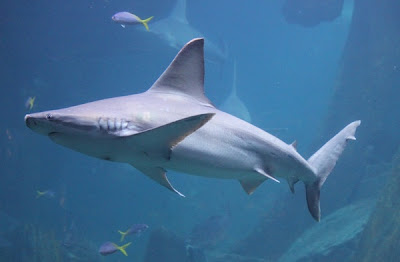 At home I tried a recipes for roasted cauliflower and beans.  It sounded great but was frustrating because I cooked the cauliflower at 200 C for 2 hours and it still wasn't soft.  I have roasted cauliflower before and it has been wonderfully soft so I am not quite sure what didn't work, other than my oven just being pathetically slow as usual.  Ah well, dinner was still good, if not quite what I intended.  Not a bad way to finish a fun weekend!

Place flour, butter, sugar and salt in food process and blitz until it resembles breadcrumbs.  Mix in yoghurt and vinegar in food processor or by hand until you have a smooth ball (if doing this by hand you will need to knead it briefly).  Shape into a round disc, wrap in clingwrap and rest in the fridge for 20 minutes or longer.

To make tarts, roll out thinly and place in greased 12 hole fairy cake tin, fill with fruit mince or jam and top with stars and sugar crystals (mine were Viennese Christmas Sugar), bake either for 15 minutes at 220 C and then 10-15 minutes at 180 C or for 25-30 minutes at 200.  (I did the former)

Mix all ingredients together and knead until it comes together into a ball.  Divide into 8 pieces and cover with a teatowel while you work on each piece.  Roll out as thinly as possible on a well floured surface (mine were so thin they were almost transparent when I held them up).

Heat heavy based non stick saucepan over high heat.  Place flat bread on the ungreased frypan and cook about 1-2 minutes.  You will see when it ready to turn because it will start to blow up.  Flip over and you should see some brown spots.  I pushed out the air with my eggflip (aka spatula) - don't know if that is the right thing to do.  Cook on other side briefly until some brown dots appear.

Eat warm or cold (I had one the next morning and it was delicious).  Repeat with remaining pieces.  I found the frypan got full of burnt flour after two or three so I would have to wipe it out with a scrunched up kitchen towel, being careful not to burn my fingers.

Sam Stern calls these Turkish pizza and suggests instead of cooking on second side on the frypan that you scatter with some toppings such as cherry tomatoes deseeded, olive oil, feta, parsley, black olives, red onion, pine nuts, salt and/or lemon juice and heat under the grill for about two minutes.