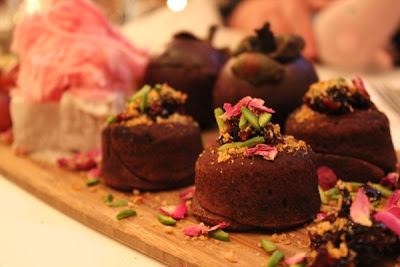 It is over a year since we first ate at the Post Office Hotel in Coburg.  I was beginning to think I would never blog about it.  The first visit was ill-timed.  The chef was away so we ate bar food.  We had a lovely meal on the second visit but my camera was missing the memory card.  Finally on our third visit, I have captured some of the amazing Middle Eastern dishes from our Banquet feast. 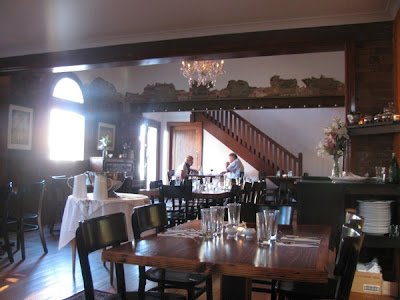 On our first visit we ate from the bar menu in the stylish but exceedingly quiet dining room.  We had cabbage parcels which were filled with a chickpea filling (if my memory serves me correctly), roasted carrots, marinated mushrooms and battered half moons.  The last item was the most memorable.  Potatoes fried in batter, like fancy potato cakes.  Sylvia loved them.  The menu has changed since then but you can read more in Cindy and Michael's post on their visit around the same time.

This peek into the bar menu demonstrates that this is no ordinary pub grub.  Nor is it the Middle Eastern cuisine that is usually served along the Sydney Road cafe strip.  The chef, Troy Payne, was Greg Malouf's protege.  He brings a creative and modern twist to the dishes. On our first visit I had a Mojito mocktail and loved it.  I had another on our second visit.  This time the chef was in and the dining room was packed to the rafters.  I was really impressed by the service, especially given that they were busy.  Upon arriving I asked for chips for Sylvia.  They don't usually serve bar food in the dining room but made an exception for a 2 year old.  When the chips came covered in herbs and sauce I said that she would only eat them plain.  They were taken away and a bowl of plain chips was returned to us with no fuss.

When I said I was vegetarian, our waitress was really helpful and suggested a green pea and fig tagine with goats cheese (not on the menu).  We ordered this alongside a baked half butternut pumpkin with a silverbeet, cashew and feta custard in the hollow where the seeds were.  It was topped with a salad of black olive, balsamic molasses, honey and chive dressing.  I found the feta custard really strong but fortunately we also ordered a Baby King Edward potato turlu-turlu.  It was a lovely comforting dish of soft potato chunks with huge green olives.  A great balance of flavours.  I also enjoyed the complimentary bookends to the meal - a starter of cress, chevre and pineut soup in a shot glass and a baklava to finish on a perfect note. 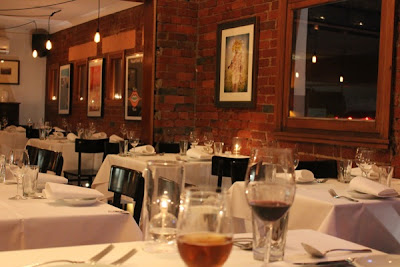 Recently we went there with my mum and dad to celebrate E's citizenship ceremony.  It was not as busy as our second visit and we outstayed most of the patrons.  When he heard we were eating at a pub, my dad had decided to choose the burger.  It was not that sort of hotel.  We all decided to have the four course banquet. 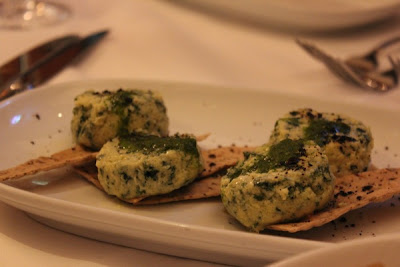 To start Sylvia had a bowl of chips and the rest of us had hot towels (for refreshment not food) and creamy nettle bites on lavash bread.  I enjoyed it but I didn't catch much more details on this wee mouthful.  We don't often go out for such fancy meals.  I wished we had a menu beside us as each course came out.  Without it, I sometimes found it hard to know exactly what we were eating.  Sylvia continuously jumped and hid and pulled at my napkin. 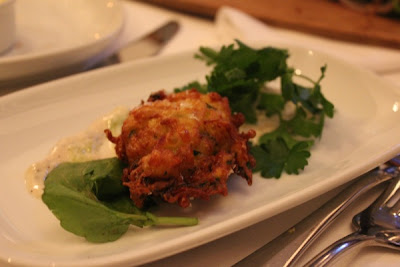 First Course: Instead of scallops I was served a feta, goats cheese and zucchini fritter with a creamy sauce.  It was deliciously crisp and tasty. 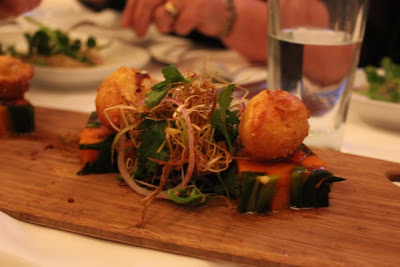 My fritter was accompanied by a terrine of spiced carrot and leek in saffron jelly with homemade peasant cheese puffs.  I was less enthused by this.  Partly because I had to run off after Sylvia and partly because the cheese puffs seemed rather similar to my cheese fritter.  I appreciated the jellied terrine but it wasn't really my sort of thing. 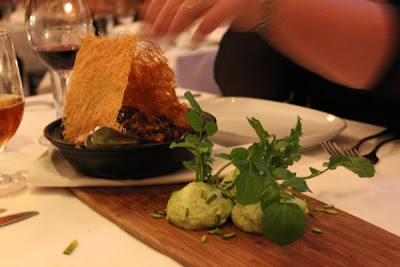 Second Course: Wild mushroom, date and chickpea tagine with stinging nettle-yoghurt whip, katafi crisps, accompanied by Sticky carrot and buttery moghrabieh pilav. I was not at all keen on the tagine.  I guess I am just not that into mushrooms and the sweet dates didn't appeal much either.  The katafi crisps were pretty on top of the tagine and the melt-in-the-mouth strands reminded me a bit of a spun wheat cereal. 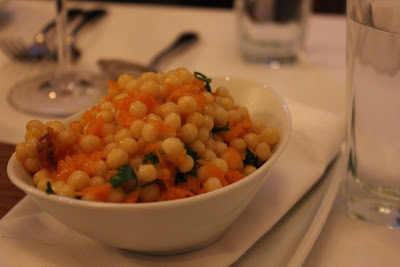 On the other hand the pilav was fantastic.  I've never had these giant couscous balls before but these were just lovely.  Chewy and tasty with just enough vegetables to keep them interesting.  I think I had three helpings (all rather small of course). Third Course: Cauliflower and feta wrapped in filo with a cream sauce (a vegetarian alternative to the chicken dish) with Wild watercress and marinated figs with walnut dressing and a Creamed leek, currant and black cabbage spelt-otto, garnished with soft herbs.  I loved the cauliflower and feta pie.  This is not a combination I have ever considered for a pie before but it was so good I might just try it at home.  I was less enthused by the salad because I just go limp at too many leaves and no one was that impressed with the spelt risotto.  E thought it too chewy.  I liked it but it was a tad too sweet. 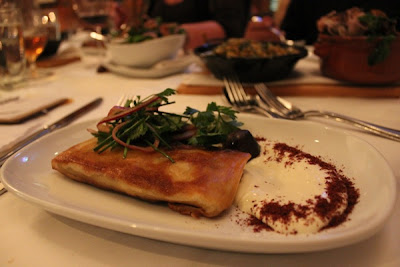 Fourth Course: Dessert tasting plate of cheese of the day, house relish and Turkish petit fours.  When the tasting plate arrived Sylvia lit up with excitment.  I think she had tired of drawing on my mum's notepad and listen to my dad's stories.  Nothing like a handful of pink fairy floss to perk up the evening.  I must say that it was one of the prettiest desserts I have ever had.

The cheese was Pecorino and the relish was a home made quince paste.  The cheese was too strong for me and I needed some crackers to eat with it.  The quince paste was soft and spreadable like a jam.  It was delicious but no match for the cheese.  Beside these were baklava (E's favourite), Turkish delight (quite firm) topped with a Persian fairy floss, grapes, mangosteen and chocolate fondants.  I loved it all.  Even the Mangosteen, which I have never tasted before.  Best of all were the gorgeous chocolate fondants decorated with petals and pistachios.  They were too rich for E.  I was sorry they were more custardy than gooey but the hibiscus infused barberry jam on top of them was amazing. 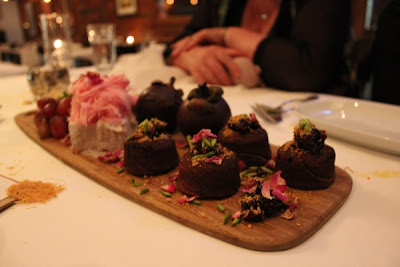 Overall our banquet was full of interesting food and good value at $55 per head.  While not every dish hit the spot, I really enjoyed trying new foods.  Some bread would have gone done nicely.  By the end, the meal went a tad too long, given that we had a small child and were tired with colds, but I am glad we stayed the distance.  It is a rare treat to go out for such a fancy meal.  A few days after the meal Sylvia told me, "I loved the fairy floss when we goed to the cafe"  Definitely a meal to be remembered fondly.