Chocolate crackles and the copha conundrum 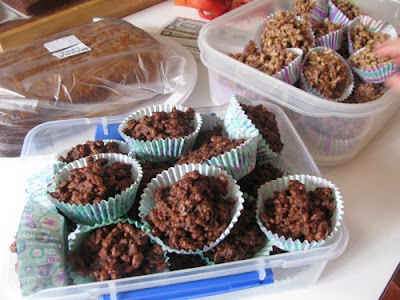 Chocolate crackles!  They fill me with a nostalgic glow.  They bring memories of childhood friends, baking with my mum, cake stalls, fetes and birthday parties.  Where there was fun, there were chocolate crackles.  Yet I haven't made them for years and years.  Why?  I don't like one of the main ingredients: copha.  This weekend we had Sylvia's child care fete so I took the opportunity for a wee experiment. 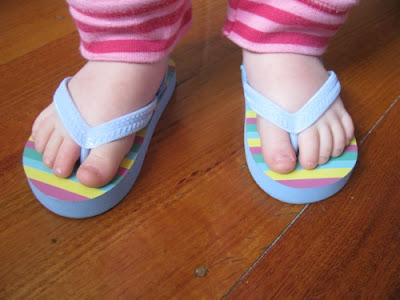 Firstly let me tell you about the weekend.  Though it has mainly been baking, shopping and bubbles in the backyard, it has been full as a state school.  I headed off to the shops yesterday in heavy rain.  I had to circle the carpark many times before I found a parking space and that everyone else had decided to do their Christmas shopping as well.  I came home laden down.  In my bag was Sylvia's first pair of thongs (photo above for those who might not use the same term).  She loved them.

Fortunately I remember E arriving in Australia and learning to wear thongs or I wouldn't be nearly so sympathetic to her funny flippy floppy steps.  I have worn thongs for so many years that I can't remember what it was like not to do so. 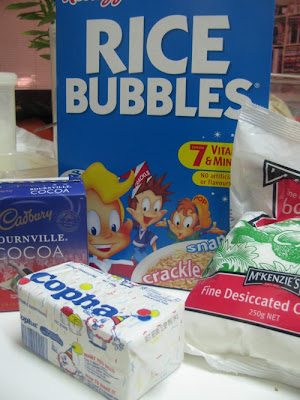 Likewise I was making chocolate crackles from a young age.  They were just part of my life.  Yet when I made them last night I was amazed at how long it took for the copha to melt.  It made me dislike the stuff even more.  Those of you outside Australia will probably be unfamiliar with copha.  It is described as a vegetable shortening.  It is made of hydrogenated coconut oil and soya bean lecithin.  It was once ubiquitous in Australian children's sweet treats but is less so today now that such fats are looked upon less favourably. 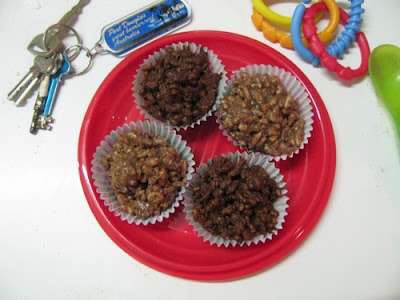 I decided I would experiment with one batch with copha and one with coconut oil, which is more popular among the health-conscious these days.  Yet I am not so keen on coconut oil either.  Then I found a recipe that used melted chocolate instead of any oils.  Having read that use of copha has declined because chocolate is more affordable, it made sense to try this alternative recipe.  The darker chocolate crackles are the ones with melted chocolate. 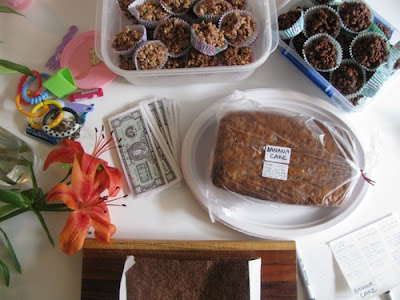 In addition to the chocolate crackles, I made a Banana Cake and Gluten Free Brownies.  Then I worried about how to take the food along to the fete.  Why did I make a rectangular loaf when it is far easier to find plates to fit round cakes?  Should I package up individual chocolate crackles?  Was cling film enough to cover them?  Did I have enough room to write the ingredients on my labels?  NB These days all the ingredients need to be written down for cake sales.  I was glad I found some freezer bags to cover the brownies after I dropped the plates covered with cling film.  They remained on the plates but I thought it would be hard to carry them about at the fete. 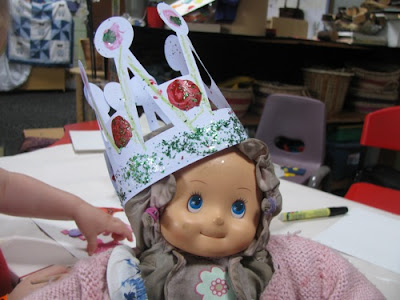 The fete was busy and chaotic and colourful as all fetes should be.  This is our first experience with this centre so we had to work out the ticketing system.  Thankfully there were vegetarian sausages and pizza on offer for lunch.  I was even more impressed that there were little tubs of salad to go with them.  Sylvia enjoyed some of the art activities and got green flowers painted on her face by a fairy.  E took along his ukelele and strummed on it in the garden.  Even dolly got a new crown. 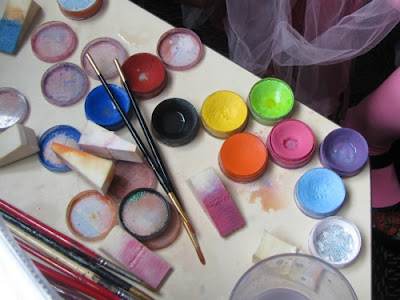 At the end of the fete a lot of my baking was sold but not all.  I was not surprised that the copha chocolate crackles were less popular.  The only advantage of this version is that they were more appropriate for vegan and dairy-free diets.  I much preferred Geoff's chocolate crackles.  They were far richer and had less of the oiliness that I don't like so much.  It is a joy to find that I can now make chocolate crackles without having to buy copha ever again.

Melt copha in a large heatproof mixing bowl in the microwave.  It seemed to take ages compared to butter.  Mine got so hot that I left the last few lumps to melt in the heat of the mixture rather than returning to the microwave. Gradually stir in icing sugar and cocoa.  Now add the coconut and rice bubbles, stirring very gently until they are all covered.  Spoon into patty pan papers and cool in the fridge.  I think these are ok to keep at room temperature once firmed up but if you are keeping for quite some time, I would probably keep them in the fridge.

Melt melt chocolates in a large heatproof mixing bowl.  Gently stir in rice bubbles and coconut.  Spoon into patty pan papers and keep in the fridge to firm up.  As with above chocolate crackles, can be kept out of the fridge unless being kept for more than a few days.

On the Stereo:
Bill Breathes: Phish