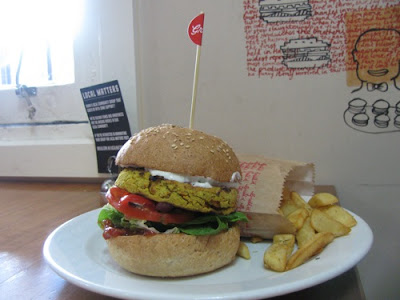 A few weekends back, we headed into Carlton because E wanted to visit a shop called Lord Uke.  Sylvia and I went to the supermarket while he drooled over ukeleles.  We then went to the new Readings discount store and the Poppy Shop for a few more purchases.  By then we were hungry and headed to Grill'd for lunch. 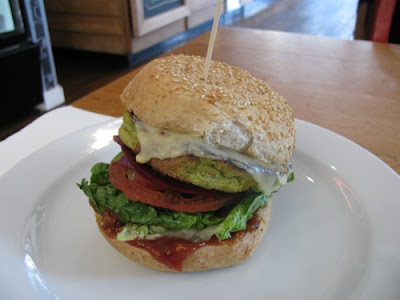 I was keen on Grill'd because I had been there in a lunch break the week before and had a lovely peaceful time with a burger and suduko.  The Garden Goodness Burger (above) was a nice combination of vegie patty, beetroot, tomato, lettuce, avocado, relish and mayo. 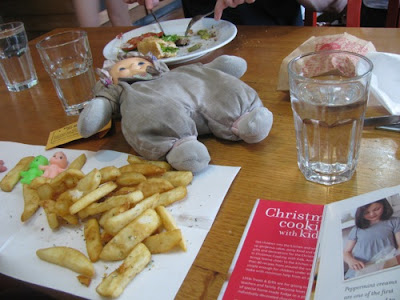 When I went there with E and Sylvia, I decided to try a different burger, the Bombay Bliss (see top photo).  I am usually wary of curried burgers but this one hit the right mix of tasty without being overwhelmed by the spices.  It came with red peppers, lettuce, tatsiki and relish.  I liked it better than the previous burger because the chickpea patty was more substantial and satisfying.

I wasn't surprised to see it was listed by The Age newspaper as one of the top 5 vegetarian burgers in Melbourne.  They called it "a '70s sharehouse meal in a bun, but in the best possible way".  Both burgers are satisfying and reasonably healthy.  Lots of fresh salad and very little in the way of grease.  They come in an impressive stack that is held together with a skewer.  They can be eaten with your hands but are a bit messy, especially with all the sauce.  (And there are also vegan options.) 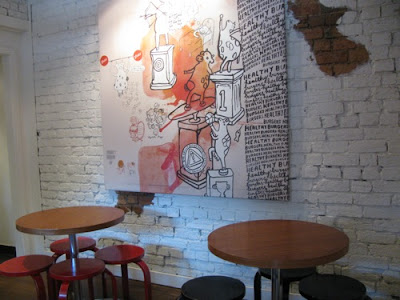 Grill'd is one of those modern franchises that prides itself on friendly staff and a bright cheery interior with a hint of grunge.  It is a pleasant place to eat provided the music is not turned up (we almost didn't sit inside because the music was too noisy but fortunately it was turned down as we were choosing seats). 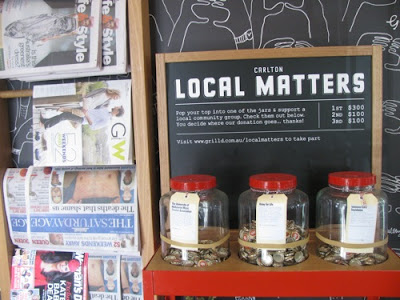 Meanwhile, Sylvia had the herbed chips and E had a meaty burger that he needed a knife and fork to eat.  Then between the two of them, they worked out what to do with the bottle top.  Grill'd gives each customer a bottle top to put in one of three jars labelled with local charities.  The one with the most bottle tops is the one toward which Grill'd makes the largest donation.  I had long finished my burger and was happy to read my new Christmas cookbook for kids while they made their choice. 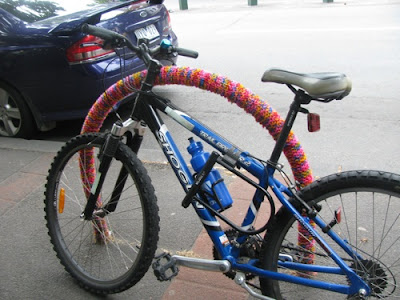 As a postscript, I went there again for lunch this week.  When I returned to my bike, I found someone photographing it.  Like a good blogger I whipped out my camera.  Actually the reason for the interest was not really my bike but the bike stand.  Someone has covered the bike stand in a bright knitted cover.  That's what happens in the hip inner-city streets.  I am sure those at Grill'd would approve!