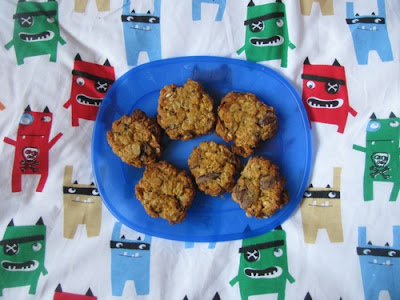 I took some photos of these choc chip cookies while Sylvia was in the bath.  It is the only way I can photograph food without her "helping" me by removing food props or just helping herself to the food on display.  I took a few photos - firstly with sylvia's new monster bedspread and then with dolly's new pink pillow.  If you watch children's television like I do, you might understand if I explain that they are more like Peppa Pig's brother George Pig with his dinosaur-grrr and jumping in puddles, than Upsy Daisy of In the Night Garden who loves daisies and preening herself. 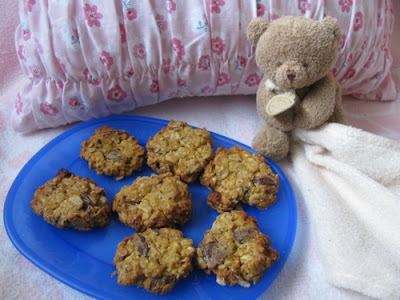 Yes these are sturdy little bikkies with a nubbly oaty texture. I had pumpkin leftover from a stuffed pumpkin when I saw other pumpkin cookies on Eat Me Delicious.  The link led me to these Pumpkin Scotchies from Two Peas and Their Pod.  I had no butterscotch chips so I added choc chips and, because I love We Should Cocoa, I remembered I had dried apples in my cupboard needing attention.  I also reduced the sugar.  Possibly that was why mine didn't seem to spread as the recipe and accompanying photo suggested.  (Below is a picture of my first batch that I didn't flatten and shape.) 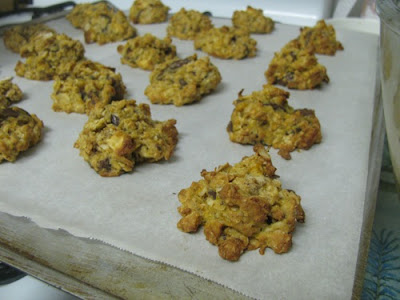 Or maybe they just didn't spread into thin chewy cookies because it was a crazy evening.  I didn't have choc chips so I rode my bike to the supermarket to buy some.  Hurrah for daylight savings and getting back into bike riding and nice drivers who give way to cyclists at roundabouts.  Boo to supermarkets who place melts in the place where choc chips are usually kept when Cadbury changes its packaging.

Bake home E asked, how long til he could eat them.  Thirty minutes, I replied blithely.  It was more like an hour.  I can't really blame others.  But I did have to drag a small girl in sunglasses back to bed, carry a recalcitrant cat inside once darkness fell, chop the chocolate melts, and open the pantry only to have a jar of raw sugar fall at my feet.  The jar was plastic and didn't spill much because I was about to fill it but it was still the last thing I needed!  Lastly I decided to make soup while baking.  Finally I peeked in and was relieved to see that Sylvia was asleep.  Would you believe that Tiny Tim was singing "tiptoe through the tulips" on the stereo! 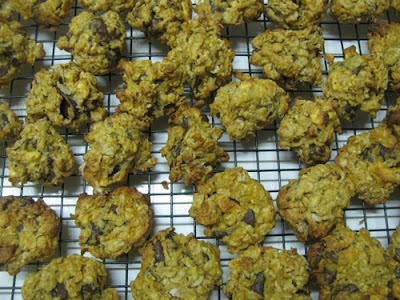 We still have quite a lot of the biscuits in the freezer.  I made over twice as many as the original recipe specified.  I cooked them much longer than the recipe said.  As I have discovered before, pumpkin makes biscuits soft and on the cakey end of the spectrum.  This can have benefits.  I cooked them until they were quite well done, which made them slightly chewy.  I suspect they are nothing like the original scotchies so I have renamed them in a way that shows I don't have a clue what to call them.  I don't even know what more to say about them, except that George Pig would say "dinosaurs - grrrrr" and that would mean they are very good.

Cream butter and sugars (I did this by hand).  Beat in egg and vanilla, then pumpkin.  Stir in flours, bicarb soda, mixed spice and salt.  Gently stir in oats, choc chips and dried apple.

Drop tablespoons of batter into prepared tray.  Flatten and shape with damp hands.  Bake for 20-25 minutes until golden brown on the top and bottom (the original recipe said 10-12 minutes but I found they didn't go golden brown).  Transfer to a wire rack and cool.  Store in an airtight container (or freeze).

On the Stereo:
The Black Session: Beirut
Posted by Johanna GGG at 22:30