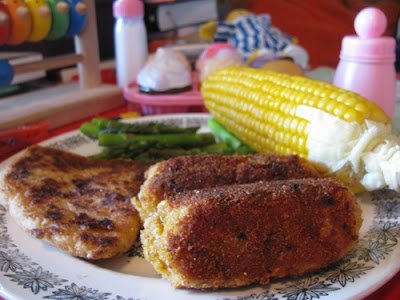 The theme for the Cookbook Challenge (a few weeks back because I am behind) was Childhood.  I thought about what to make.  Food for children?  Food from my childhood?  Food that my toddler, Sylvia, loves?  Food from a children's cookbook?  In the end I chose Cheesy Pumpkin Sausages from Veggie Food for Kids that I thought ticked all the boxes.  I loved them.  Sylvia, however, did not agree and refused to eat them.  Kids!  Sigh! 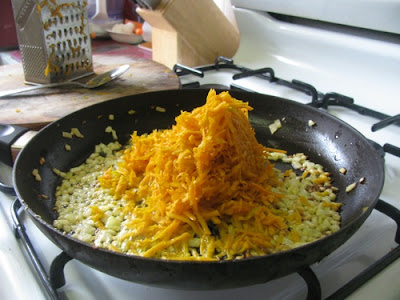 I made them after Sylvia had scoffed two vegetarian sausages (from the supermarket) at a family barbecue.  It delighted me to see her enjoying her sausages with tomato sauce on them, wrapped in a square of bread.  That is how I loved to eat them as a child.  I have written about my memories of sausages before so I wont go into great detail here. 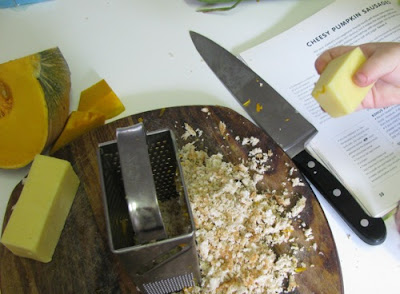 However I will tell you, yet again, that I also loved pumpkin and cheese as a child.  Still do.  Sylvia loves cheese but doesn't understand the glories of pumpkin.  Not yet.  I thought she might love some cheesy sausages.  She enjoyed helping.  As soon as I start cooking, she is always on a chair beside me in the kitchen. 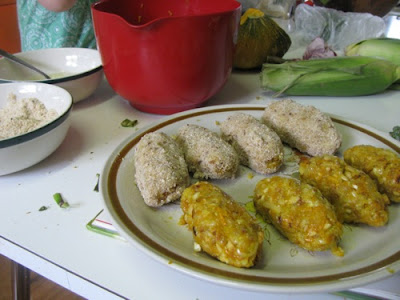 I loved these sausages.  They were crisp on the outside and the right texture on the inside.  I used more butter and oil than I usually would.  Maybe they could be baked, but I suspect I would prefer these fried.  The sausages were even better after I botched a sausage recipe from Rose Eliot's Vegetarian Supercook a few months back.

I had worried that Sylvia might not like the nuts but she refused the sausages on the grounds of pumpkin.  I didn't think the pumpkin was that prominent.  I even wondered if she just knew it was there because she helped make it.  Not that there is any reasoning with kids.  E and I loved them.  I ate the leftovers cold for lunch with some leftover vegan queso dip.  If only every lunch could be that good! 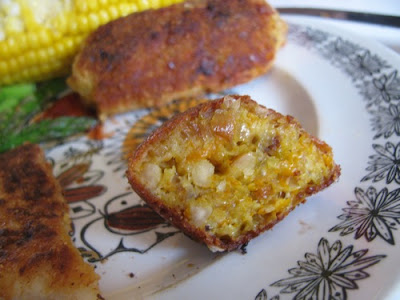 The last childhood related part of this post, is that I used the plate which is exactly the same design as the ones we had in my childhood.  Bought for nostalgia value!  And a post about childhood is not possible without a picture of Dolly.  We had the sausages with corn, asparagus, and potato scones made with leftover mashed potato.  Sylvia loved everything except the sausages. 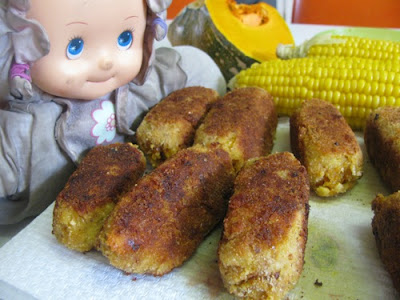 I will finish with a photo of Sylvia's new shoes.  It is all change lately.  Sylvia is rejecting the cot and nappies.  She has a new doona, new sunglasses and new sandals for summer.  I found these sandals in a shop but they didn't have her size.  Through the miracle of modern technology, the saleswoman was able to show me the shops where they were in stock in the right size.  One shop was near my parents and they were able to buy them for me.  Below is the photo I took in the shop to email my parents (I am not mobile savvy enough to send by phone!)  Aren't they pretty! 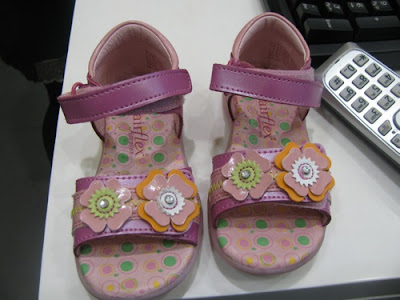 Heat 1 tsp of oil in a large frypan and gently fry nuts - they are done when they are golden brown and/or you can smell roasted nuts.  Set aside.

Heat butter in the same frypan.  Fry onion until lightly browned over medium to low heat.  Add pumpkin and cook until tender but not mushy.

Meanwhile mix fried nuts with cheese, fresh breadcrumbs and egg yolks in a medium to large mixing bowl.  When onion and pumpkin are cooked, add to the mixture and stir well.  Season as required.  (I didn't season as I think that cheese and breadcrumbs add enough seasoning.)

Now that you have your "sausage meat" you need to set yourself up to make it into sausages.  You will need a shallow bowl of the dried breadcrumbs, a shallow bowl of egg whites (lightly whisk these with a fork as much as you can be bothered) and the bowl of sausage mixture.  First divide up the sausage mixture into 8 portions and roll each into a little fat sausage.  You may need to keep your hands damp so they don't stick to your hands.  Dip each sausage in egg white and toss in the breadcrumbs so they are well coated.  I had enough egg white and breadcrumbs to dip half the sausages twice and I think dipping once was just as good.

Heat the remainder of the oil in a frypan (I didn't really measure but was more generous than usual with the oil) and place the sausages in the pan.  Fry over medium heat, turning regularly until well browned and crispy.  Drain on kitchen paper towel and serve hot.

On the stereo:
Tijuana Moods: Charlie Mingus
Posted by Johanna GGG at 20:49