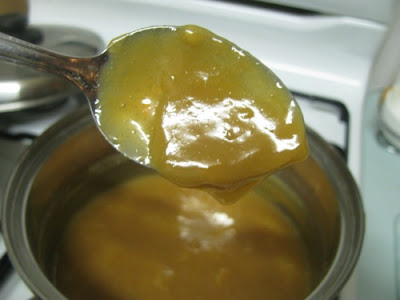 The good things in life: Riding to work on a glorious spring day (especially when I haven't done it for ages).  Talking with a colleague about how cutting your own hair at home is so much nicer than going to a hairdressers.  Discovering it isn't that hard to make soy condensed milk.

I finally made a batch of soy condensed milk on Friday.   I had been determined to try it after seeing all the additives in the tin I bought recently.  I found Kari's post about vegan milks helpful.  I chose Bonsoy because it had good levels of protein and fat compared to others I looked at.  The recipes online were fairly similar with different amounts of milk - Joy of Baking used 4 cups of milk, a bakespace recipe used 3 cups, veganbaking.net used 2 and 3/4 cups. I didn't have much milk left because E and Sylvia keep using it up in porridge.

It was a great success.  I love condensed milk.  Who would have ever thought it was so easy to make at home!  I just stirred it every now and again.  Now that I have discovered I can make my own from soy milk and it is good enough to eat straight out of the saucepan, the sky is the limit.  (veganbaking.net says you can also do this with coconut milk or rice milk.)  Admittedly mine looked more like dulce de leche, but it tasted great.  I'll tell you about the fudge I made with it soon.

Place milk and sugar in a medium saucepan and bring to the boil.  Reduce heat to low.  Gently simmer, stirring occasionally, until it reaches a creamy consistency, or let it simmer further to become caramelised into dulce de leche.  If it is too thick, thin down with a little soy milk while it is still hot (I tried to thin mine once it had cooled and it was a bit lumpy though I suspect if I had blended it, it would have been smooth).

Here is how mine looked when I put it in the saucepan (it is still a mystery to me as to how sugary milk, which I dislike so much, can transform into a thick sticky sweet liquid that is manna from heaven): 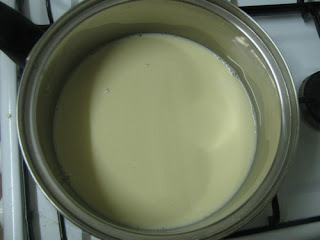 It looked like this after 30 minutes of simmering (at this stage it still tasted like boiled milk which I hate and I thought it would take ages - it seemed to be developing milk skin which I also hate so I was worried it would taste horrid but this just blended in when stirred): 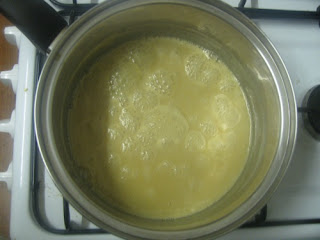 Finally I was delighted to see it after 50 minutes of simmering (oops, after feeling it was just like sweet milk for ages, it suddenly was getting into dulce de leche territory): 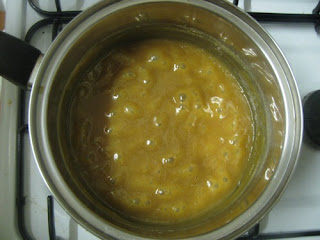 Mine made 1/2 cup of thick caramel sauce.  I started with 2 cups milk and added 1/4 cup at the end after taking it off the heat to give a bit more volume.  I let mine cool a bit and would recommend adding extra milk when it was still hot if it is too thick.

The commercial tin of soy condensed milk that I bought recently was kept in the fridge at the shop, and one online recipe warned it only kept for 7 days in the fridge.  So I'd recommend making this shortly before you want it.

On the Stereo:
Two of a Mind: Paul Desmond and Gerry Mulligan
Posted by Johanna GGG at 17:07